I'm back! I've spent the past week sunning myself in Portugal, and as a result I've turned the colour of creme caramel. This is a victory for me because I'm normally a sickly white. Hopefully I'll stay a bit brown and glowing for a while.

The one thing I can't switch off, though, is my Tarting instincts. We had planned a trip across the border to Seville, and on the way there in the car, I suggested it might be fun to have a ride on the Metro, which only opened last year. The Bf harumphed his agreement, no doubt mentally calculating that a ride on an underground is worth at least one World Cup game back at the villa.

The Spanish are Metro crazy, and yet for some reason it hadn't yet reached Seville. There was an attempt to build one back in the Seventies, until the money dried up. The new Metro is an unusual hybrid: it runs underground in the city centre, but the trains are actually trams, identical to the ones that run through the city streets. It's an interesting concept, as it reduces the cost to build the routes and allows the Metro to reach further out into the suburbs than it would do with conventional rail. As it turned out, Line 1 is completely segregated from other vehicles, but at least they have the option.

It hasn't stopped the Metro from being Credit Crunched, though. The plan was for three lines, but the second, due to begin work this year, looks increasingly unlikely as Spain wrestles with its debts 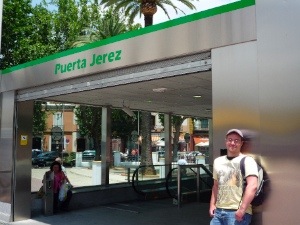 We started out at Puerta Jerez, right in the very centre of the city. My first reaction is - what the hell is that font, Seville? Green is apparently the traditional colour for the city, so I'll let that slide, but that station name looks horrible. It has no class or dignity. What's worse, they've used that font everywhere - signs, maps, everything. A unified design is great when it works - when it doesn't you're just staring at nastiness everywhere you look.

Still, the station entrance itself is nice, open and sunny and, blessedly, air conditioned. We headed down into the ticket hall, which is very spacious. Ridiculously spacious in fact. This can be great in an underground station - think Canary Wharf or Bermondsey - but here it just feels like a waste of space. All that open air for no apparent reason. 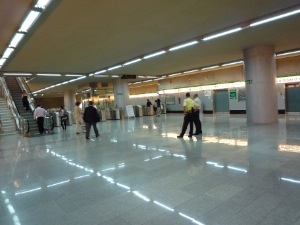 The ticket office was closed, so we had to negotiate the machine. This should have been simple - there was an "English" option - but they really should have used something other than Google Translate to decipher it. The English was more confusing than the Spanish. "Tablets" instead of "Tickets"? "Go and Back" instead of "Return"? And what the hell are "Jumps" - we had the option of 0, 1, or 2?

In the end we got two "Go and Back" tickets, mainly through bashing the touchscreen like ham-fisted apes, and pushed our way through the electronic barriers to the platform below. 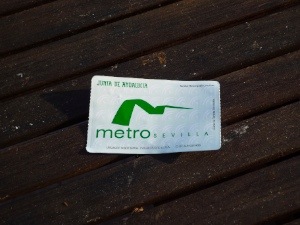 Down the escalators, onto the single island platform. There are Platform Edge Doors, to stop random suicides, which I always like: it gives the station a sort of Star Trek air, especially as the train comes gliding in behind them almost silently. 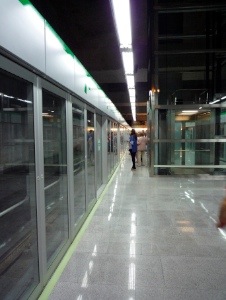 Troublingly, the train we boarded was packed. It was a roasting hot day, and I was worried about my levels of sweatiness. Fortunately, we boarded right behind the driver's cabin, and thanks to a smoked glass wall, we were able to stare inside, watching the driver operate the controls and getting slightly seasicky as the tunnel streamed towards us. 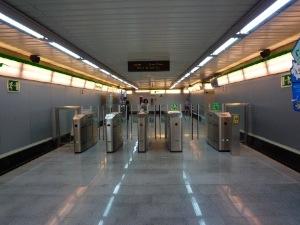 We had no distinct destination in mind - we were just there for the thrill of the journey (well, I was) - so we got off spontaneously at Gran Plaza. This is much more of a neighbourhood station than Puerta Jerez, and has one tunnel with two side platforms - in fact, this is the tunnel built in the Seventies. It's smaller and more compact, which is bizarre, because right above our heads was the Estadio Ramon Sanchez Pizchuan, home to Sevilla FC. Can you imagine the streams of fans that must push their way through those tiny ticket gates on match day? It must be like pushing Colgate out of a Tube. Still, the street level presence is nice. 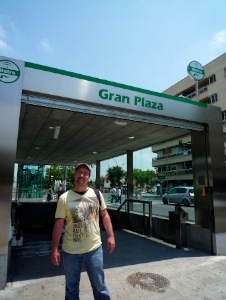 Incidentally, you see that hat? I had to buy it on the first day because my rapidly balding head was frying in the sun, so I nipped into a C & A! Yes, they still have them in Europe. I found that ridiculously thrilling. 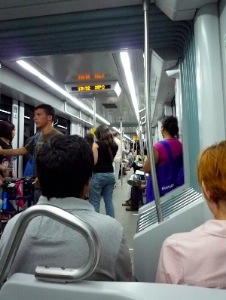 After a wander round, to take a look at the very impressive stadium, we had nothing else to do except get back on the train and head into town again. I have to admit to being disappointed - it didn't have the wow factor that other new lines like London's Jubilee or Paris's Meteor do, and it didn't have the charm of Madrid or Barcelona's networks either. It felt a bit soulless. Perhaps it's because, with the tram-trains and the awful green lettering, it just wasn't quite working - it didn't convince as a big city network. This is not to reflect badly on Seville itself, because I adore that city - it's a wonderful place to visit, and I'd happily move there if I could. It was just a bit of a let-down.

What did inspire me, though, was the thought of how the same principle - trams on the outskirts, tunnels in the city centre - could be a cheap way of bringing Metro services to UK cities. It would be a lot more efficient, and less intrusive, if the Manchester Metrolink (for example) was sent underground as it crossed town. Or perhaps Liverpool could get some use out of the old railway tunnels under the city by sending trams down it too. So long as they copy Seville's ideas, and not its awful design standards. That would be too much. 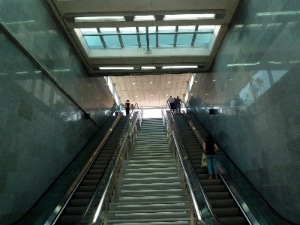 Yes they definitely stuck that through Google Translate as the Spanish for return when talking about train tickets is "ida y vuelta" which is literally "there and back".

I'm guessing you'll be filling up the Seville map once you're done with Merseyrail's?!

It's part of my nefarious scheme to visit every single train station on the planet. Two down, forty million to go...