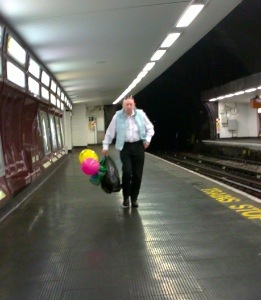 I'm with this guy.

He's been to a McDonalds, and had to marshall a load of screaming, insane, E-number fuelled children. They threw food, they clambered over the furniture, they chucked coke down their fronts. They wiped their noses on the bun of that kid everyone hates and made him cry. At the centre of this is a teeny tiny brat who is demanding everyone gives him their fries because he's the birthday boy and while they're at it he wants the best of the Happy Meal toys and if you don't give it to him he's going to SCREAM.

This guy's had to deal with all that, and all he's got out of it is probably a couple of hours with his snotty, obnoxious grandchild and two balloons with a Happy Meal logo on them. He thought it'd be a nice time out but kids are evil. He wants to get home and get away. What could possibly help him?

A keg of Heineken. Yeah, that'll do. He's going to get home, collapse into an armchair, and pour out the first of many, many pints of lager. Then he's going to pop each of those balloons, and enjoy. Every. Moment.

Email ThisBlogThis!Share to TwitterShare to FacebookShare to Pinterest
Labels: Merseypeeps

This is a Jeremy Kyle episode in the making...