So Faro, So Good

My holiday was in Portugal, and yet I've only written about Spain's metro, which is a bit unfair: like going to Scotland and telling everyone how great Cornish pasties are. In fairness, I did also visit Faro's main train station.
Faro's the capital of the Algarve, and unlike sweaty fish and chip purveying, vomit strewn sinkholes like Albufeira and Villamoura, has retained much of its historic core. There are pretty churches, a set of town walls, and an elegant marina.
The railway station is away from all that, in a district the travel guides probably call "gritty" and which everyone else calls "dumpy". It's at the end of a road full of grim bars, back packing hostels and rough looking cafes whose main menu item seems to be salmonella. We hustled past the concrete bus station, surrounded by pedlars and beggars and finally turned up at the tiny building.
For such a major town, Faro railway station is surprisingly tiny. It's about the size of one of the larger Merseyrail stations, Ormskirk perhaps, with a newsagent, ticket office and waiting room. It's a lot nicer inside than out. 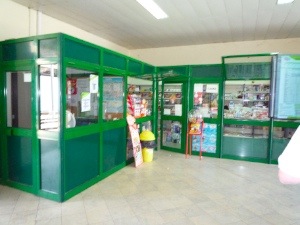 The platforms and waiting rooms were deserted - it was a Sunday, after all - but there was a train waiting in the island platform. Not being a trainspotter, I can confidently say that this train was "red", and also "quite large".

Really, it was more like a country station than a town's centrepiece. Our travel guide had already warned us that railway services in this part of the world were slow, and that you'd be better off travelling by a (spit) bus than a train. Which seems odd to me, but seeing the way the station is tucked away, almost shamefully, in the back end of town, I'm not surprised. 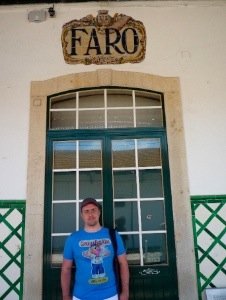 Nice tile action. I'll give them that.