The last week has been an uninterrupted streak of glorious, hot weather, sunny and sticky. So what happens the one day I decide to leave the house? It goes cloudy and rains. Marvellous.

The plan was to hit Hooton to see the new MtoGo shop, and then to have a bit of wander down the Wirral Way - the old Hooton to West Kirby line. My partner in crime once again was Robert, who is increasingly becoming the Lois to my Clark. Sorry, the Lewis to my Clark. We venture forth into untarted territory, unbowed, fearless. With me in charge, obviously. 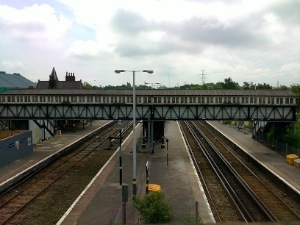 First stop, though, was Hooton, the unattractively named junction at the base of the Wirral Line. I tarted it - Christ - two years ago, but it's subsequently had a load of cash thrown at it to be redeveloped, so I wanted to get a "before" under my belt. 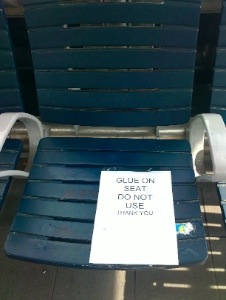 We got off the Chester train and immediately spotted this curious sign in the waiting room. I can't quite work out what's gone on here. Is there some technical, redevelopment reason for there being glue on the seat, or has someone just spilt some Uhu? Are they setting up a YouTube joke for later, when someone "hilariously" gets stuck to it? All the other seats were fine. It was the first time I'd been in one of those glass Tardis waiting rooms that have sprung up all over the place - it was surprisingly nice. Back when I used to commute to Chester, we'd often have to get off at Hooton for various reasons (usually a breakdown of some kind), and I'd stood in the peeing rain on the platform rather than venture inside the shelter. It always seemed to be occupied by aggressively noisy thirty something women who would do anything to protect their over-elaborate hairdos, and God help you if you came splashing anywhere near them. They've since built another modern looking waiting room on the Liverpool platform, but annoyingly, it doesn't match the one on the Chester platform: 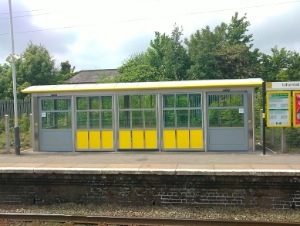 Clearly the silver and blue scheme offended the Colour Tsars, and they decreed the new one should be in the corporate livery. It's also bigger than the old one. Freudians, do your work. 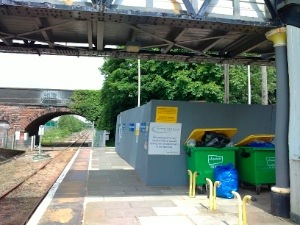 The biggest redevelopment to come at Hooton will be a new footbridge, incorporating full lift and disabled access. Because this is a busy station, and the active platforms are only accessible via the existing bridge (the platforms nearest the ticket office are used to hold trains overnight), it wasn't possible to demolish the current bridge until a replacement was around. As such, they're going to build the new bridge behind it, then demolish the old one once it's in place, somewhere early in 2011. The workmen are already on site, and have got rid of the old disabled toilet that used to be on the platform. No word yet on whether they'll transfer the distinctive "eau de pissoir" to the new footbridge, but fingers crossed. 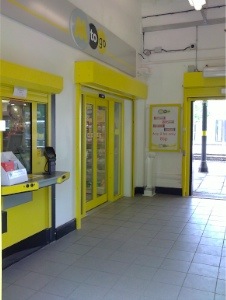 Another part of the redevelopment is they've finally opened the long-promised MtoGo shop in the booking hall. The previous newsagent that was in the station building closed years ago, so it was always surprising that they took so long to install it. It's a smaller version of the Liverpool Central or Moorfields buildings, and looks very neat - however, it was closed when we got there, so we couldn't go in and poke the confectionary. I never knew that MtoGo shops did close, actually: I thought they were open as long as the station was, but the presence of a ticket window indicates otherwise, I guess.

The question is, why is Hooton getting all this cash thrown in its direction? I thought it was just a reflection on the fact that it's been neglected for a long time. Even though it's a Merseyrail station, and is within area B with the rest of the Wirral, it's actually in Cheshire. It's been ignored in the same way that the other Cheshire stations have.

Robert, however, had a different explanation. Network Rail have advocated more trains on the Liverpool-Chester route, freeing up capacity and increasing reliability. It'd also mean that there'd be six trains an hour between Hooton and Liverpool. However, to do that, they'd need to add some more trains.

Initially, the idea was to add units from London, the only other place that runs trains like we have on Merseyside. They were replacing theirs, so the trains were going spare. For some reason though, Merseyrail haven't bitten their hand off. The trains are still sitting around unused. No-one knows why: perhaps Merseyrail can't afford to rent them, or perhaps they don't fancy upgrading the trains to our standards. God knows what the Colour Tsars would say to trains that weren't yellow and grey travelling around willy nilly.

Without any new trains, it's difficult to add new services. So they may fall back on a different proposal: implement the four trains an hour to Chester... and withdraw the direct service to Ellesmere Port. One train would be left to run there and back again, and everyone would be forced to change at Hooton. Hence the upgrades, to ensure the people waiting on the platform are well catered-for.

This is all a rumour, for the moment. It would of course be a massive step back for Ellesmere Port if its direct service to Liverpool was withdrawn: even if it's a relatively simple change, it's an inconvenience for passengers. It'd be bad for Liverpool too, as I'm sure many of the people who currently take the train to shop in the city, for example, would change to a bus to Chester to save time. Plus, you only have to look at the Helsby-Ellesmere Port service to see what can happen when a service becomes a shuttle: it gets wound down and down until it becomes nothing. I'll keep an ear out but it would be a shame if this investment came at the detriment of the train service: that's text book giving with one hand, and taking away with the other. 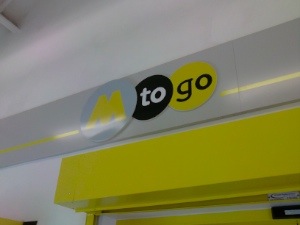 There was some dark comedy in the train cascade idea. NS/Serco had declared they didn't want the ex-Southern Region stock. Angel Trains, the owner, put them behind a loco and had some of them hauled over a few days all the way to Merseyside anyway. NS/Serco then said (I'd imagine, slightly louder) that THEY DIDN'T WANT THE TRAINS. So Angel put them behind another loco and hauled them all back down south.

But don't worry: the taxpayer paid for all of this nonsense, so nobody rich lost any money.

Weird that you posted this because today at around 4 I got the train from James Street to Birkenhead Central and it was terminating at Hooton rather than Ellesmere Port. When I got off the train I noticed on the electric board that after the next Chester train there would be another Hooton train. There was no mention on the loudspeakers about there being some sort of engineering work or anything. Have the begun this awful sounding changing trains at Hooton business already?! I'll feel sorry for the two people that change at Ellesmere for stations to Helsby! Yet another train change for them!

There are a couple of afternoon peak services which only go as far as Hooton (the 1603 and 1618 from Moorfields) so it would probably have been those you saw.

Yeah, the ones that only go to Hooton are directly supported by MPTE, so they only go as far as the border and then come back again.