I have a confession. I love Merseyrail, the network, the map, the yellow and grey M. But my heart belongs to the London Underground. That's the network I first fell for, the one I first journeyed on just for the pleasure of journeying, the one I first became a teensy bit obsessive about. Merseyrail is my wife - safe, reliable, always available when I want it. London Underground is my mistress - ready to be ridden hard but only on the occasional stolen weekend away. And yes, that metaphor did just get a bit unpleasant.

I've got loads of books about the Underground; in fact, my bible is London Underground Stations, by David Leboff, a gazetteer of the architectural features of the system's stations. It's very out of date now, but I have many a happy memory of riding around the Underground when I should have been at Sixth Form, clutching my book and wandering from line to line. It's the simple things that amuse me.

In fiction though, it's slimmer pickings. There is one, truly great novel about the Underground: 253 by Geoff Ryman. It's amazing in its print form, and it's amazing in its hyperlinked, hypertexted form as well. The story of the people occupying a tube train, there are 253 stories about 253 people, each one of which is 253 words long. I first read it about fifteen years ago, and I still dig it out every now and then because it's just fascinating. 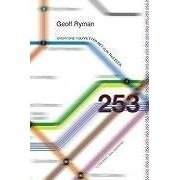 (Also, parenthetically, Geoff Ryman is a brilliant writer. Lust is superb, kinky fun, and Was gives the Wizard of Oz a whole load of dimensions you never even thought about. I saw him talk once, and I was all ready to ask an intelligent, thought provoking question, until I moved wrong and the Stewie From Family Guy Key Ring I had in my pocket shouted "Damn you vile woman", and I spent the rest of the lecture trying to conceal myself under the seat).

Anyway, where this is going, is that having read the Best Novel About London Underground Travel, I'd not really hunted out another. However, Jamie from Boom Bang A Blog (the internet's best resource for anything involving singing Moldovans and douze points) suggested that I have a look at Tunnel Vision, by Keith Lowe, as it seemed similar to my tarting. Only in a day and on the Tube. The plot is basically that Andy (our hero) makes a bet with Rolf, his fellow Tube loving nerd, that he can visit every station on the Underground in one day. He does this the day before his wedding, and bets his honeymoon tickets, his passport, his travelcard, and his Eurostar ticket to the ceremony in Paris. In other words, if he doesn't visit all the stations in 24 hours - and take a photo of every station sign - he won't be able to get married, and he won't be able to take his bride away to confirm their nuptial bliss in Antigua.

I don't know if you're thinking the same thing as me, but all that went through my mind was, "what an arsehole". You'd have to be astonishingly, horrifically drunk to agree to that sort of thing, and what's more, you'd have to be a massive wanker to actually go through with it. Especially when your fiance - the fragrant Rachel - finds out about it and explodes. This was a pretty major handicap for me. It's hard to sympathise with the hero when you think he's a bit of a twat. I spent most of the novel thinking, "I hope he fails, and she dumps him. It will teach him to get his priorities right."

This is a novel though, a light, jolly romp of a novel, and so apart from Rachel no-one tells him he's a twat - even when she writes it on his forehead in lipstick.

The second problem I had, again, right from the off, was that you can't just spontaneously decide to visit every Underground station, and then make it up as you go along. It's impossible. You've got about twenty hours to do it in, so you need to know timetables, change times, which carriage to get in so that you can jump out quickly at the next station. And if you suffer derailments, one-unders, cancellations, pulling of emergency cords and so on (as Andy does, in what surely must be the worst service day in the history of the LU) then you may as well give up because there's not point in carrying on. You just can't do it. If you're as big a Tube nerd as Andy supposedly is, you'd know that. Also, he's just leaning out the doors to take a photo of the platform sign, and as both I and the Tubewhore will tell you, that's just cheating. If you don't pass through the ticket barrier it doesn't count.

Anyway, leaving that aside, Andy travels all over the system with the help of Brian, a tramp who attaches himself to Andy at Morden station and becomes his partner in crime. Brian's one of those cute, cuddly homeless people you get in fiction: despite allegedly being an alcoholic, he doesn't actually drink that much, and he certainly never gets drunk, stands up in the middle of the Tube carriage and starts screaming that he's gonna fugging kill the lot of yus. Moreover, he doesn't smell, doesn't have any mental health issues, and is just a bit sad because his wife ran off with a kitchen fitter. And just to prove how unrealistic he is, at no point does he soil himself. This is frankly ludicrous. As anyone who has travelled on the Underground will tell you, the first thing all tramps do the minute they get on a Tube train is to fill their pants, so that every passenger then becomes trapped inside a long metal stink bomb, pressed up against one another and trying not to gag into each other's handbag. Brian pees on the track at one point, but that's as far as his outdoor toilet habits go. Ridiculous.

The novel's breezy and fast paced; thankfully, we don't get to experience every single station along with Andy, as even I might have found that tedious. At the same time, we get to see Rachel being very badly stalked by Rolf, who has conceived this whole scheme as a way of trying to split the happy couple up so he can have her for himself. I can see why Rolf would go after Rachel, because she is, frankly, perfect. She is a former underwear novel who's also superintelligent, swears like a trooper, is down to earth and funny while at the same time being glamorous and approachable, and she loves Andy to bits even though he is, as previously mentioned, a wanker. While she spends the day wondering if Andy's ok, he's staring down the blouse of an Italian temptress and rubbing up against the breasts of female passengers (seriously. There seems to be an awful lot of Tube based frottage going on. Every time there's a bit of a rush hour crush Andy takes the opportunity to stare down a woman's blouse at her tantalising hints of bra).

It sounds like I hated this book, which I didn't. It's perfectly readable, it's not too taxing. As the book progresses, I did become more involved in the plot line, and it felt less like an Underground geek's trek round the system with a bit of fiction slathered on the top and more like a proper novel. Towards the end, as he gets close to achieving his aim, I even began to wish him well.

It's also a fascinating reminder of a time, only ten years ago, when you could run round the Underground like a lunatic, when you could take pictures of pretty much anything you saw, when you could shout and scream at LU officials without being shot in the spine by gung-ho men from the Met. You don't think things have changed too much in the last decade, but there's no way Andy would be treated with the mild bemusement by the staff that he is here in our post 9/11, post 7/7 world. Which is sad. It's also sweet to remember a time when you used to have to use call boxes to contact people and A-Zs to find your next Tube station instead of just using the augmented reality app on your iPhone.

The end - and this is where spoilers come in, folks - was sadly a big let down for two reasons. Firstly, Rachel doesn't get on the Eurostar to Paris when Andy doesn't get there on time. Instead she lets the train to her wedding (and her family, incidentally) go off into the distance while she quietly awaits his arrival. Sod that. I'd have been avec gay Paris before you could say baguette, nabbing myself a Frenchman who owned a Citroen and wouldn't abandon me for the delights of the Metro. Very disappointing.

The other let down was that Andy forgets Mornington Crescent because he's using an old Tube map, which shows it as still closed for refurbishment. Rubbish. I live 300 miles from London, and I've still got a copy of the latest Tube pocket map. Also, I was well aware when Mornington Crescent reopened. If Andy is as much of a Tube geek as he supposedly is, he wouldn't have made such a basic, schoolboy error.

Perhaps I'm too much of a Tube geek to read this myself without spotting the flaws. Perhaps it's utterly fascinating to - for want of a better word - civilians. I just couldn't totally engage with it. Geoff Ryman remains undefeated.

Email ThisBlogThis!Share to TwitterShare to FacebookShare to Pinterest
Labels: books

This post is very interesting, although Im shocked you make no reference to the horror I had of realising the Circle Line was no longer a circle (despite the picture of that very thing on you post). I come to Liverpool for a 3 months and my beloved underground is destoyed D:

I may have to become a merseytart.

But there's plenty of room for another merseytart ;-)

Although I can't boast your knowledge of the Underground, I can agree on spending most of the time thinking what a nob the main protagonist was for putting a stupid bet with such an unlikeable fellow enthusiast before the biggest day of his life.

And I read the book on the train on the way to work, on Mersyrail of all networks - does that square the circle?

I think that actually creates a self-referential vortex that could consume us all.

All I can say is Brian was damned lucky not to get 750 volts up his manhood, peeing on the tracks like that.

That would definitely have livened things up. You can't beat a bit of electrified knob to put a perk into a novel.

Scott, I was rather looking forward to this book until you gave away the ending lol!!!

My mental illness began alarming those closest to me when it took me just over a week to photograph every Merseyrail station sign, and I have an intimate knowledge of the system!!!!!

It seems this "Andy" was not only a "twat", but a bit of a dickhead too?

Twat/Dickhead/Oaf. All of the above.