Is it a bird? Is it a plane? Oh. I was right the first time.

As I write this, the Penguins are taking flight from Liverpool. Well, I say taking flight; they're not actually flying, because they're penguins. And they're made of fibreglass.

The Go Penguins! project was basically the Superlambanana trail for 2009, and it again saw a load of local companies and dignitaries designing giant comedy animals to dot around the city centre. Last year Merseytravel did one that was designed to look like the Merseyrail map, so that was obviously made of win as far as I was concerned.

This year Merseyrail went with Supenguin, a flightless bird who can fly faster than a speeding bullet. At first, it seems there is no link between a super powered penguin and a local transport provider. Fortunately, Supenguin's creator, Paul McKay, provided us with the explanation in a comic strip I first spotted at Hamilton Square station just before Christmas.

Yes! It's a Merseyrail comic strip! In this thrill packed tale, a Merseyrail train is whisked off to the Endimension by a mysterious figure (well, actually just a face), only for Supenguin to sweep to the rescue and, with the help of loyal train driver Bobby Tickets, they save the day. I contacted Paul to get the background info on where he came up with the idea. "I submitted my entries for the Go Penguin event," he e-mailed back, "Two of the entries were Supenguin & Batguin, and as the theme of the event was the Environment, I knocked up a short comic featuring the two characters saving penguins in the Antarctic."

Merseyrail approved the idea, though they nixed Paul's plans for Supenguin to look a bit more like a certain Kryptonian. "It was decided that DC Comics would not allow me to continue, so a rethink was needed. As I had lots of yellow and Merseyrail's colours were yellow, I changed the design to suit. I think it worked out, as now the character is particular to Liverpool, whereas if I'd continued with the original Superman design, it would just be a copy of something else." 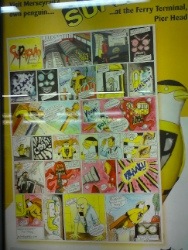 With the Supenguin now clad in the corporate colours (which I approve of: Scouse pride!), Merseyrail asked Paul to put together a comic strip featuring Supenguin that was a bit more, well, exciting than eco-warrioring, because as he points out, "Environment issues can get a little boring! They gave me full control over what content was in it." And so the story of one penguin's valiant battle against giant weird eye creatures in an alternate dimension was born. Am I alone in wishing that my Merseyrail train was occasionally sucked into another universe? It certainly beats being stuck on the tracks outside Formby due to a line side equipment fault.

Is this the end of Supenguin, I asked? "I deliberately left the story open as Merseyrail have said they would like to keep things going," Paul replied. "I have enough material for at least 5 more episodes, before I have to start thinking of new stories. Ultimately though, it's up to Merseyrail to commission more stories. I really hope they do, as I think the characters have a really long shelf life and it would be a pity to forget about them." Indeed; I smell merchandising. Supenguin toys, Supenguin pyjamas, Supenguin lunch boxes. TV shows, music CDs, perhaps even a film - after all, if the Tube can get its own kiddie show in the form of Underground Ernie, why not Merseyrail? We could even get Ringo back to do the voiceovers. At the very least, it'd give them some interesting souvenirs for the M to Go shops...

Many thanks to Paul McKay for the additional info.