I dropped off my Mini for its MOT at the Williams garage on Pall Mall Friday morning. Can I just say that Pall Mall is one of those Liverpool streets whose name writes a cheque the reality can't cash? (See also The Strand and Hatton Gardens). It sounds classy and upmarket, but actually it's just a load of factories and industrial premises and potholes.

One of the reasons for this, of course, is the railway. This whole area was blitzed when the railways were forced through, and pretty soon it became a haven for goods traffic, engine houses, and all the other paraphenalia you get with a major city centre station.

That station was Exchange, the mighty terminus of the Lancashire and Yorkshire Railway and Liverpool's gateway to the North. Once, you could get trains to Manchester, the Lake District and even Glasgow from here; now there are just two tracks running alongside Pall Mall, high on the viaduct, and the furthest you can get is Southport. 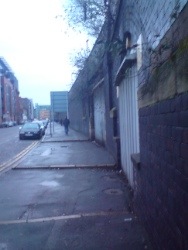 That's not to say that it's all gone, however. As I walked into town from the garage I snapped some photos of Exchange's remains. The most obvious parts are as you cross Leeds Street and enter the southern part of Pall Mall. To your right are the distinctive railway arches that used to hold up the approaches to the station, now mostly bricked up and covered with moss and weeds. It completely closes off one side of the road, and reminds you of how oppressive railways can be in city centres, the way they can divide communities and districts. The railway approaches for Exchange Station effectively split that area of the city centre down the middle.

There was one link though, a pedestrian subway which ran under the tracks and continued the path of Prussia Street. The entrance is still there, though it's long since been closed off. When it was built it was one of the longest subway tunnels in the country. Now it's just another hole in the wall. 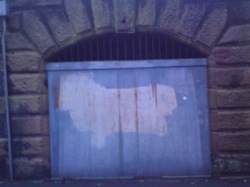 Above it is the real shame. Sending the tracks underground in the 1970s for the Link project meant that acres of land were suddenly opened up, right in the heart of the city. Unfortunately, it did so at a time economic crisis and rampant unemployment in the city, so the value of the land just vanished. So what do we have there now? A car park. 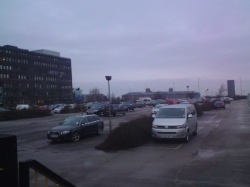 Not even a very nice car park - just a load of gravel and concrete, like a waste ground with ideas above its station. I'm not denying that car parks are very useful, but it's not exactly inspiring, is it? 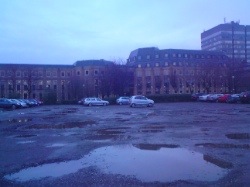 To be fair, Liverpool Vision have produced a "masterplan" for the area, trying to encourage development and a more commercial use for all those acres of land. Ironically, part of the problem is the same railway tunnels that created the opportunity in the first place. Anyone who's travelled on the Northern Line knows that at Sandhills you're high above the streets on a viaduct, but by the time you hit Moorfields, you're metres underground. That calls for a pretty steep bit of tunnelling, plunging under the streets, complicated by the fact that you've also got the Queensway Tunnel and the Wirral Line round there to contend with. As a result the tunnels for the Northern Line are pretty close to the surface - so you can't build on them. Whoops.

Liverpool Vision's idea is that there will be parkland directly over the top of the tunnels and buildings around it. Hopefully it will be a lot cheerier than the current bit of parkland with its signs declaring that it's not a public right of way and you're basically only permitted onto its grassy lawns through the benevolent dispensation of the Gods of Mercury House. 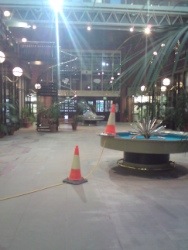 Mercury House is the name of the office building constructed on the site of the station building, and as you can see above, it's so 1980s it's painful. It's the Wake Me Up Before You Go Go of offices. Really, it should have a giant FRANKIE SAYS t-shirt draped across it. Inside isn't much better - I thought it would still retain some of the mystique and aura of a great railway terminal, but instead it looks like Alexis Colby's idea of English classiness, all wrought iron and lighting globes, combined with spiky stainless steel fountains.

The only glory of Mercury House is once you get outside, and you get to take in the old facade which the redevelopers wisely retained. Glorious stuff; majestic, dignified, exciting. There's a beautiful symmetry to it, with two wings stretching out from the twin arches of the entrance, and that massive station clock in front. It certainly shows up the disco styling on Moorfields station, just down the road. I like Moorfields, trust me, and it's modern and functional and clean, but Exchange is just... better. It's like comparing a Rolls Royce Silver Ghost with a Nissan Micra. The Micra might be faster, smarter, more technologically advanced and more comfortable - but the Silver Ghost is just class, and you can't buy that.

Pride of place in the centre of the arches, watching the passengers arrive, is a monument to John Pearson, chairman of the L&YR and former mayor of Liverpool. I wonder if he approves of what was done to his station. Perhaps they blindfolded his statue while they demolished the building behind. 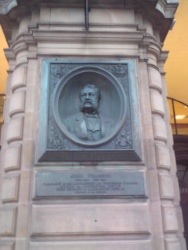 Progress is double edged. The Link is undoubtably far better for the city, far more useful, far more efficient. But I miss the grandeur of the Exchange, and the way it's been artlessly turned into a bog-standard office block behind its beautiful face. It seems like a cruel way to treat such a grand dame.

The remains of Central High Level are all the more painful. If you stand on the ramp to the car park behind Lewis's you can still see where the platforms were. The horrible 80s shopping mall-cum-M'rail station (brutally cold-feeling) that stands as a parody in its place makes it look like the railway was raped, when actually the Loop/Link was a good thing.

The images I've seen of Central (http://www.subbrit.org.uk/sb-sites/stations/l/liverpool_central_hl/index.shtml) suggest that architecturally, it's not as great a loss as Exchange. I agree that the Central Shopping Centre is incredibly shabby (though even I can remember it being much, much worse) and a very debatable improvement.

The land behind is a strange anomaly - it exists in a weird netherworld, lower than the street level with none of the surrounding roads giving any hint of what was below. Hopefully the Central Village project will go some way to rectifying that, if and when it's ever built, and will prompt a rebuild of the station premises while they're at it.

It does make me think that maybe I should go and have a poke round there sometime to see what I can of the remains of High Level before it disappears under the diggers...

My thoughts exactly about Exchange. I was six years old when I last got on a train to L.E, and I have very vague memories of how cavernous the place was!

There's some great internet stuff on Exchange too.

A fascinating place to go looking for clues as to what was there, rather what isn't there now!