I was, briefly, in That London last week.  The ostensible reason was so I could cross off seeing the Abba holograms.  I was one of the few homosexuals in Britain who still hadn't seen it and they were threatening to make me a straight if I didn't hurry up.  The actual, secret, main reason I was going to London was so I could visit Crossrail the Elizabeth Line.

I have been following the Crossrail Project for literally decades.  I remember seeing reports of it on Newsroom SouthEast, back when it was being proposed by British Rail (I may not be young).  I've watched it slowly crawl through Government and TfL until a spade went in the ground.  I visited an exhibition at the Royal Institute of British Architects all about the design of the station.  I watched, enviously, as bloggers and Twitter users and people I actually know in real life travelled down to London and experienced the new shiny world of Crossrail.

I planned my route.  I was staying in a hotel near Stratford International station, at the back of Westfield.  A moment, by the way, to say that the area around there - the former Olympic village - is a completely desolate space.  It reminds me of when I visited Canary Wharf back in the early 90s.  It's a lot of tall buildings with very few people; impeccably manicured lawns and nobody to use them.  Anyway, I decided I would do the patented Merseytart exploration of the line:

That way I'd cover the core tunnels, plus I'd visit the huge Canary Wharf station.  If I had time I'd jump back on the train and visit Woolwich, because I'd been there when it was just a big hole in the ground so it'd be good to compare and contrast, but the main part was visiting the central underground stations. 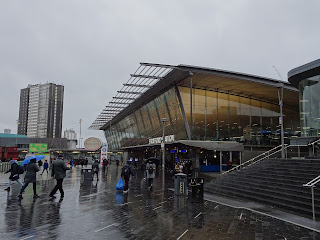 I walked to Stratford station.  It's a much sadder station than I remembered.  In my head it's the gleaming steel and ambition of the Jubilee Line Extension, the crowning glory at the end of the route.  That massive ticket hall appeared on all the literature and in all the pieces promoting the new Tube line.  The addition of new routes, plus the millions more people who use the station, has left it tired and confused.  There are passageways and footbridges everywhere, but it all feels illogical, as you'd expect from a station that's been cobbled together over a century.  The DLR goes from here, unless you want to go to that destination, in which case it's in a completely separate part of the station.  The Central Line and the Jubilee Line are miles apart, and the platform numbering seems to have been pulled off a board randomly by Rachel Riley.  At some point they'll have to start all over again with it and try and make it make sense. 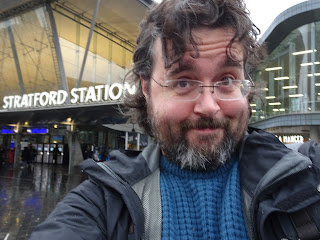 Still, at least there's those lovely purple line trains to travel on.  I marched through the ticket gate and directly to the platform, but the first train was going to Liverpool Street only; it wasn't even stopping at Whitechapel en route.  A bit annoying, but thanks to diamondgeezer I was aware that the linking up of the sides of Crossrail was a long and drawn out process, so presumably this was part of that. 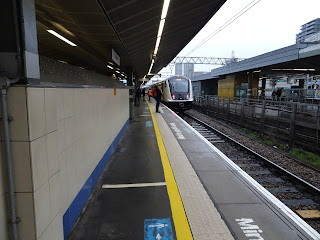 The train came and went and I looked up to the departure board and... that one was going to Liverpool Street only, too.  Was I perhaps on the wrong platform?  Was there an underground one for trains through the centre?  Then I heard the announcement. "mumble mumble industrial action mutter Elizabeth Line whisper stammer trains restart at six thirty Friday morning."
Fucksocks.
Now, this blog is very much pro-union and pro-industrial action.  If circumstances are such that the withdrawal of labour is your only resort then it is a desperate state of affairs and it is sometimes the only means of action a worker has against their boss.  Trade unions got many of the rights and privileges we currently enjoy as employees, often through strikes; do you think women would get six months maternity leave purely through the generosity of their bosses?  Of course not.  And strike action should be disruptive.  You need to demonstrate why your work is so valuable to both your employers and the public at large.
On the other hand, couldn't you have picked one of the other 364 days in the year folks?
I was incredibly disappointed.  Getting down to London is a rarity for me these days - in fact, as you may have noticed, doing anything is a rarity for me these days.  I've been trapped under a huge project at home and haven't been able to have the time off to gallivant on the trains.  This was a rare opportunity for me to see something new and exciting, a rare example of this country investing in transport and the future rather than banging on about the good old days. 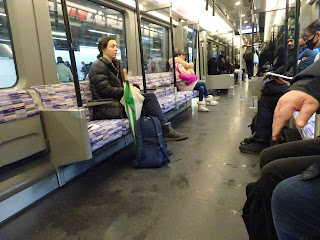 I sadly boarded the train.  They're nice enough - not a very satisfying noise, I'll be honest - but they were clean and open.  Passengers were taking them for granted.  I was the only idiot looking at them. 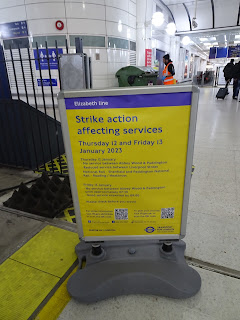 When you have a plan you were really excited about, having it taken away leaves you a little hollow.  You can't really think of an alternative.  I was in London, one of the greatest cities on earth, and I couldn't think of what to do with myself.  I eventually decided to do a little bit of transport exploring. 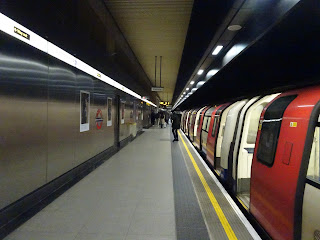 The Battersea extension to the Tube opened in 2021 but again, that was after I'd last been in the capital.  I headed down the Northern Line to take a look. 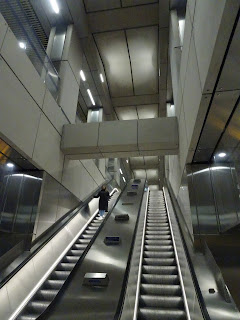 My main impression?  Nice enough.  I mean, it does the job.  Perhaps it was my general feeling of let-down but I was a bit "is that it?"  The Jubilee Line Extension spoilt us all.  It made us think new underground lines should be palaces.  There should be huge open spaces and gleaming technology and art.  In reality, this is all you need for an underground station.  Two platforms, some escalators, a ticket hall.  Job done. 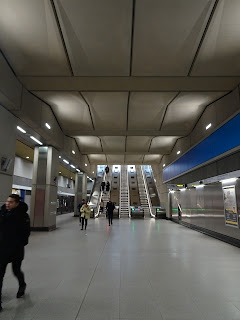 Outside was rain and a building site.  Again, the station building is nothing special; a glass box with a different coloured roof to provide a moment of interest.  You can see what it's for and it attracts the eye.  On a dark night it'll be a glowing and inviting beacon. 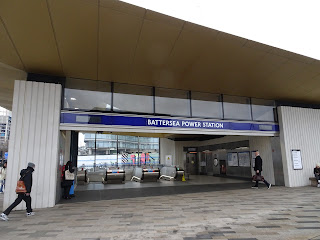 It's just not... special.  I want the Tube - all new stations - to be special.  They're important focuses for people.  They're hubs for communities.  I guess I care about them more than other people. 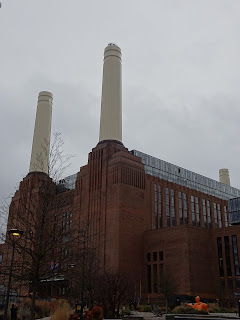 Of course I had a look inside the Power Station itself, and of course I was underwhelmed.  It's been beautifully restored.  They've clearly spent an absolute bomb on it.  But it is, at the end of the day, a shopping mall, and not even one for the likes of me, one for people with too much money.  Calvin Klein and L'Occitaine and Mulberry.  When Reiss and Marks and Spencer are the low-end retailers I back away slowly, that working class chip on my shoulder calling out to me. 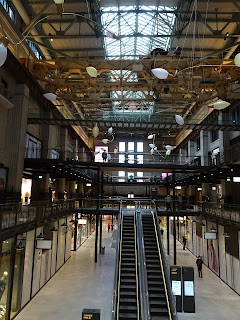 Outside meanwhile there are canyons of anonymous apartments at prices that make me gag (one bed studios still available starting at £450,000).  They're not even very nice; they're so closely packed that an awful lot of people are going to be staring at one another across the narrow pedestrianised alleyways.  And again, there was nobody about.  Admittedly it was raining but it didn't feel like a place.  It felt like a dormitory.
Still, Abba were good.  So there's that. 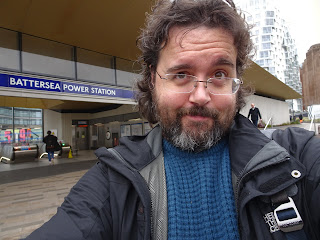 Still, you got a one word ABBA review out of it, so your trip wasn't totally wasted.

You are not alone in viewing the recent development of London a tad underwhelming. It is mostly concerned with making money for fat cats, sheiks and oligarchs .......

Glad you enjoyed ABBA. It's a hell of a show. And sorry about the strikes.

Have you been sleeping in a hedge?