The Future Is Now

It's been a long time coming.  A very long time.  But finally there are new trains on Merseyrail. 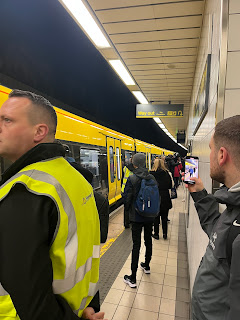 Yes, the 777 trains finally went into service this morning - well, one of them - and I was there to witness this historic event.  I was there with Robert, who'd taken the morning off specially, and we headed into Central along with roughly eight thousand other rail enthusiasts to see the future in action.  I didn't get a press pass; I didn't want to overawe the journos from Granada Reports and the Echo with my astonishing bona fides.  Instead I boarded the train with the great unwashed and found a seat. 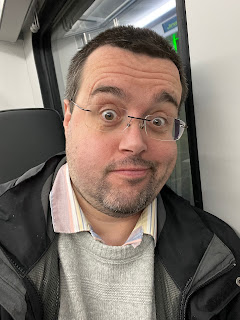 A hard seat.  It was fine for the time but I wouldn't fancy going from Hunts Cross to Southport on them.  The little leatherette headrests are scant consolation for the numb buttocks.  Still, we were off, and the train was pleasingly quiet.  Anyone who's ridden the soon to be decommissioned 507s and 508s knows that, for electric trains, they're surprisingly noisy.   Clicking, chugging, whirring, not to mention the clatter over the tracks themselves, and when they get into a tunnel it's virtually impossible to have a conversation.  The 777 (in this case, 777 049, for those of you of a trainspottery bent) glides out of the station with a whirr.  It's not got the sexy purr that Birmingham's electric trains had but it's pretty cheery. 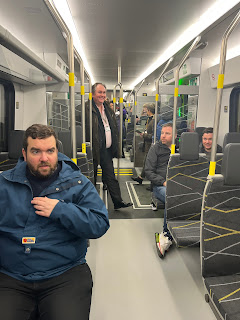 The interiors are bright and clear.  It feels more spacious, which might be because of the lack of carriage doors; this is one long train you can move down easily.  The days of people moving from one carriage to the next and forgetting to close the door behind them, leaving it banging irritatingly all the way to Aughton Park, are gone.  There's WiFi - which I couldn't get to work, but that might've been me - and charging spots under every seat.  Bikes are catered for, and so are pushchairs, and there are luggage racks and grab bars everywhere. 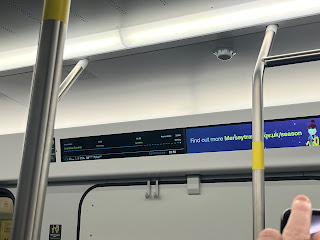 The most exciting feature for me is the glowing LED display telling you where you are en route and what the facilities at each station are.  I love it so much.  I'm so easily impressed by a gadget.  It tracks along the line, flagging up each station and the arrival time (which proved a bit of a mistake on the return leg when the sheer weight of enthusiasts taking pictures and leaping on and off caused it to be delayed, making all the arrival times a nagging red).  Alongside it is a scrolling message space telling us these are OUR trains and plugging Saveaways and season tickets.  I'm guessing there's already an ad seller trying to flog it to Pantene and Cadburys. 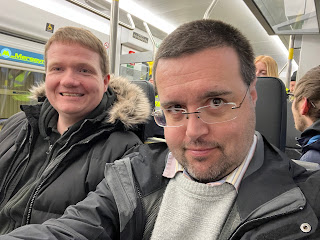 There was an honour guard of staff at every station, yellow tabarded, some snapping pictures and all of them looking thrilled.  It's a big day for the Liverpool City Region.  These trains are owned by the local authority, and so basically my Council Tax paid for it.  I asked if they'd name one after me but so far I haven't heard back.  They're replacing trains that have been on the rail network for as long as I've been on Planet Earth and I think people are going to be delighted when they see them. 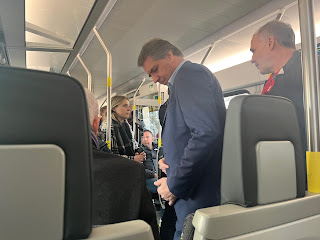 Somewhere outside Sandhills the set of four seats in front of us was cleared and Andy Gill from North West Tonight appeared with a camera man.  Right behind him was the man himself, Mayor Steve Rotherham.  They proceeded to sit in front of us, holding an interview, while I felt a blush rush up over my face.  Still, it means, for the first time in my entire life, I've been on telly: gurning and trying not to look at the camera. 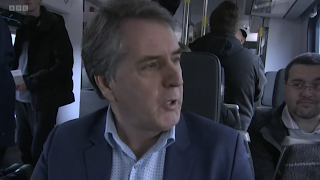 Robert never made it on air, which is payback for that time we went to see Pointless and he, Ian and the BF all appeared in an audience shot and they cut me off the edge.  No I'm not bitter. 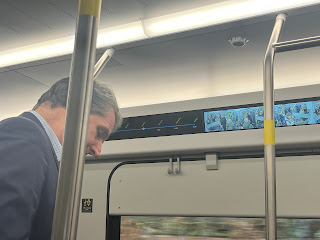 Steve finished his interview and did a bit of glad handling, asking a potential voter nearby what he thought of the trains.  Unfortunately he'd not taken into account the, let's say, devoted personalities of us train folk.  His question of "what do you think of the new trains?" was met, not with a resounding fabulous!, but a "better than I thought they were going to be".  Steve quickly skulked away.  Similarly, a reporter from Radio Merseyside prowling the aisle realised not to canvass the opinions of any of the middle aged men about the train or she'd get a load of information about bogies she didn't know she needed.  Instead she pounced on the slightly bewildered looking civilians who hadn't realised the magnitude of their journey and just wanted to get to Fazakerley Hospital. At Kirkby, the end of the line, we all disembarked to take a picture of the front.  It's interesting that the M logo is accompanied, not by Merseyrail or Merseytravel, but by Metro.  Is there a rebrand coming? 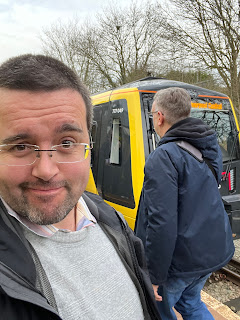 A train man literally sighed with disgust when I took a selfie in front of this train, as well he might.
We all got back on board for the return trip, for some reason passing up the opportunity to sample the delights of Kirkby.  More photos were taken, more videos - I apologise to all those people who got my fat head in the back of their YouTube presentations. Back to Central, and we stayed on for another round trip.  The dignitaries all got off, while a lot of the train fans did too so they could film it departing, leaving it much like an ordinary train trip to Kirkby.  It meant I got to look out at the scenery a bit - Everton's new stadium rising in two curved halves on the dockside, like an upturned crab; Kirkdale's broken lift "until further notice", a reminder that even what was once new and exciting falls to the ravages of time and lack of maintenance; the row after row of new trains at the depot, waiting to join their brother over the next year or so. 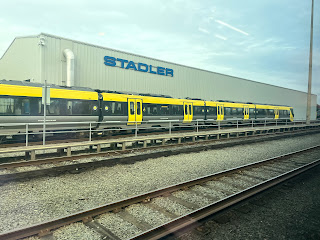 The new trains will make Merseyrail feel so different.  Modern, forward thinking, exciting.  I hope the rollout is fast enough to mean that they can ferry people to the Grand National or the Open or Eurovision, these big events that will act as a showcase for the City region.  I hope people are proud of them.  I hope the scallies don't tear them to pieces.
I got off the train at Moorfields so I could get the Wirral Line home, promising to have a drink with Robert at a later date (he was staying on until Central to maximise his new train time).  I filmed the train departing from the platform.  The first train of many.
Posted by Scott Willison at 19:25