Going Round The Back

For reasons far too dull to go into here, I nipped over to Liverpool today.  Heading for the lift at James Street I noticed there was only one in use; not ideal, but not unusual.  The lifts at James Street are large and aging and get a hell of a hammering - it's rare to see all four functioning.  Going back to the Wirral, I passed through the ticket barriers, and was waiting for the lift when a man appeared behind me and the small group waiting.  "Do you want to come this way instead?" 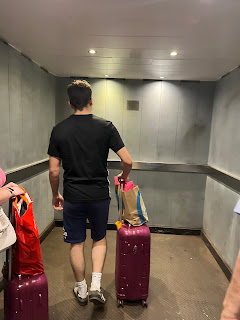 We were lead across the ticket hall and into the goods lift, a lift I had never before noticed even existed.  It was a little grimier than the usual ones, not quite so well kept, but larger, and comfortably took the dozen or so passengers and suitcases and pushchairs that squeezed in with it.  The Merseyrail man pulled the cage doors closed, pushed the button, and we descended.

Then, much like a theme park, we got the chat.  It seems the Merseyrail man had a spiel, a little monologue he'd prepped, and for the entire descent into the bowels of the earth he talked merrily.  They'd opened up this lift because three were out of action to accommodate the passengers, it's all perfectly safe, couple of little gags for the kids, a whole one man show.  Bless him, he loved his moment in the sun.  And he fell the right side of charming too - not one of those excruciating speeches that make you die inside.  I did video it, but then it occurred to me that it's kind of rude to post someone on the internet without their knowledge (plus there were a load of kids in the video and parents don't like that) so you'll have to take my word for it. 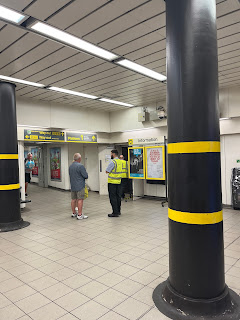 We got down to the concourse below, welcomed by another member of staff, and directed off to our platforms ("Wirral to the right of me, Liverpool to the left").  I tottered off to my platform, pleased to see a side to a station I'd never seen before.