Return of the - ok, maybe not the King, maybe a minor Baron

It's been a very long time since I went anywhere on the railway that wasn't Merseyrail.  Fifteen months, in fact.  I know this, because a mix of sentimentality and grim fascination made me keep the e-ticket on my phone the whole time. 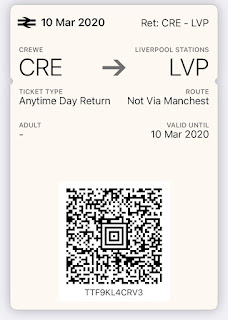 That was when I headed for the stations between Nuneaton and Coventry Arena; for complex reasons involving a Day Ranger that I can't quite remember I only needed an additional ticket for this part of the trip.  What I do remember is that on the train back, at Wolverhampton, a man sat next to me wearing a face mask.  Alright mate, calm down, I thought.  That's a bit over the top.  Now I'm the person who severely judges anyone in the supermarket for not wearing a mask.
I could've gone out before, of course.  I could've strapped on the face mask, loaded up on the antibac, and headed to Birmingham.  But at the same time, I couldn't.  The trains were for people who had to leave the house; they were for people who had to go to work or visit people.  Important reasons.  Not larking about under station signs.
Plus, of course, I was afraid.  Not for myself.  I am stupidly unconcerned about myself.  My brain's an absolute mess but I am quite blithe about my physical health.  It'll sort itself out, I think.  It won't be too bad.  And if I die, I die, whatever.  It was my time.
I do, however, care about the people around me, and the people who've been shielding, and friends and relatives.  If it was just me I'd probably have the West Midlands Railway map done by now.  The fear of passing anything on, however; that's stopped me from travelling out there.
Until now.  I have booked a ticket to a station on the map.  I have worked out a schedule to visit some railway stations.  I have planned a walking route.  I'm double vaxxed (AstraZeneca, a bit tired the day after but otherwise no ill effects) and ready to go.  I've reached the point where I hope the positives outweigh the minuses.
I might chicken out.  I might reach the day of the trip and anxiety will swamp me and it'll be, nope, no, can't do this.  But on the other hand, I might be sitting down in a couple of weeks time with a cup of tea to write a blog post about a back street in Birmingham, accompanied by a picture of my gurning face.  Fingers crossed.
Posted by Scott Willison at 07:08

Well done, nice to see you back. It'll probably do your mental health good to get out and about.

Good to see a new post on this blog. Hope the trip to Brum goes well.