One aspect of railway stations that's often overlooked by planners is the sense of arrival.  As the decades have worn on it's become more important to make sure you can park outside, or find a bus stop, or spend your money in a shop.  The idea that this is a welcoming space, this is your hello, your first impression of a new city, has only recently become a consideration.

Some cities get it right.  Walk out of Lime Street and you're smacked in the face by St George's Hall.  King's Cross now has an impeccable pedestrian square out front.  But a lot don't, and this seems to be particularly prevalent in seaside towns, for some reason.  Imagine arriving for your holiday, hot and sweaty from a train journey, carrying suitcases and crying babies, and getting a wonderful welcoming view.  A real inspirational, happy hello, something that makes you glad you've finally arrived.  It seems to happen very rarely.  Southport station is a dark concrete cavern.  Blackpool North empties you into a car park in a bowl.  Morecambe is an apology behind a Morrison's.

I bring this up because Great Yarmouth could be lovely, but it isn't.  The tracks climax in a terminal building at the nose of a promontory where the River Yare meets the River Bure; it's got water on three sides.  Imagine walking off the train and seeing, in the distance, the glitter of sun on water, a view out over the quays. 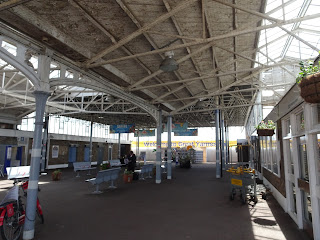 Great Yarmouth doesn't do this.  It has a large roofed concourse to accommodate holiday crowds but it's dark and unwelcoming.  And the exit is to the side.  You're chucked out into the car park, with the road to the Asda running past, and a high A road towering above as it crosses the river. 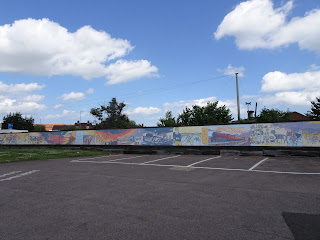 I left the station and followed the signs for the pedestrian route into town.  It took me to what could've been an impressive gateway to the town.  The Vauxhall Bridge is a Grade II listed bowstring bridge over the river, built in the 19th century to replace a suspension bridge that collapsed under the weight of pedestrians.  Crowds had gathered on the bridge to watch a circus event, a man being dragged along the river in a bathtub by four geese, and the weight was too much for the chains.  Seventy-nine people died, mainly children, when it fell into the river.  Its replacement is, as you'd expect, incredibly sturdy and powerful.  For years it carried goods trains across to the quayside tramway, where they could be loaded with fish, but now it's merely a pedestrian bridge.  Well, half of it is, anyway. 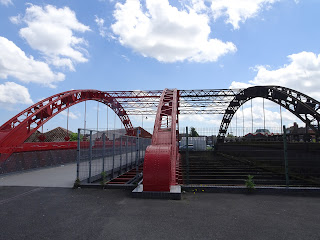 Ok, walkers and cyclists don't need that entire width of bridge, but it would be nice to see it properly restored.  I walked across and ended up in a car park, then walked down a back road lined with industrial units towards the town centre.  Carpets and tyre shops, then a Job Centre with a queue outside, and I was in the Market Place. 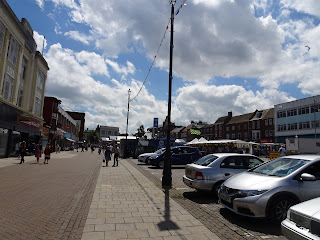 Again, a blunt pragmatism had won out over making it a destination.  What could have been an attractive open space was a car park.  Row after row of parked cars right in the centre of town.  Crossing from one side of the Market Place to the other meant dodging traffic.  This happens across the country, but is usually in small country towns, places where there's not much demand for multi-storey car parks otherwise.  Great Yarmouth is a town of 100,000 people; they have off-street parking spaces.  There's no need for it.
The end of the Market Place looked busy so I took a side street and ended up in the town's bus exchange. 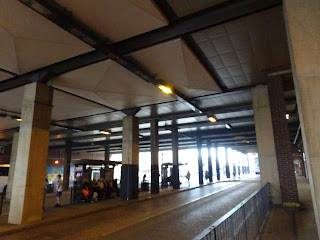 There are many reasons why buses are seen as the poor relation of public transport.  It's hard to see a noisy diesel bus chugging next to a sleek electric train and not compare it unfavourably.  The role of bus stations really shouldn't be underestimated either.  So many times it's a strip of tarmac under a dark oppressive roof; little natural light, barriers everywhere, nowhere to sit.  Great Yarmouth's exchange was hidden under a pedestrian mall, the dirty secret of the shopping centre, the acknowledgement that yes, people might get the bus there but really they wanted the people in the multi-storey at the far end who'd buy a lot more and load it into the boots of their Volvo.  I passed through the station, past the Wetherspoons at the far end where shirtless men poured more lager into their bellies on the pavement outside, and headed towards the front. 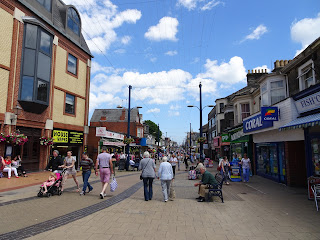 Regent Road is a long pedestrianised street that stretches from the town centre to the pier.  A generous soul could term it a boulevard, suitable for promenading.  A less generous soul would term it a mess.  It's a stretch of the purest commerce, a naked strip of cash grabs, shops that sell everything and yet nothing you'd want.  It's not souvenirs, a gift from Yarmouth, a stick of rock; it's t-shirts with knock-off band pictures, it's one pound cleaning products and vases, it's Made in China ceramics of animals.  There were vaping superstores, a shop selling "ENGLISH" belts made of "QUALITY" leather where they clearly didn't understand the implications of those inverted commas, a joke shop where a plastic old man bent over to vomit a stream of coloured water into an oil barrel.  There was food, Chinese all-you-can eats and Britannia Fish and Chips and the oily stench of fried chicken.  Amongst all this Le Continental looked positively classy, trying to bring Parisian elegance to a fly tip of debris. 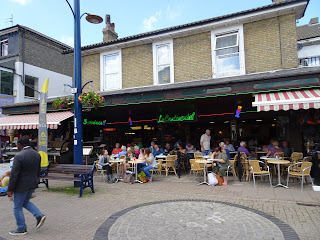 There was litter and noise and the occasional whiff of weed.  Pushchairs clattered through the crowds as battering rams.  Towards the end you finally got the seaside, the sticks of rock and the ice creams, the buckets and spades and nets for crab catching, but it was a long ugly fight to get there.  On the prom they'd tried to make it classier, with granite setts and posh benches, but the ugly face of Jim Davidson (The People's Comedian) leered down at you from the ads for the Pier Theatre, beside Psychic Sally and Showaddywaddy. 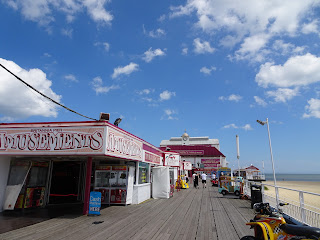 A pier though.  Everyone loves a pier.  I walked out over the sands, resisting the urge to chuck a handful of coppers into the penny falls, seeing the families on the rides.  They were from a different era.  Long John Silver and cowboys and Indians and Frankenstein's monster on the Ghost Train, the plastic fading in the sun.  The dodgems were closed.  I went to the bar where a tiny Eastern European girl served me - after the Brexit vote that morning, I felt like apologising to her and saying I was Remain - and then I took it out and sat overlooking the sand.  Though the prom was busy hardly anyone was on the beach.  A few scattered families, some pensioners, a fisherman at the edge of the water. 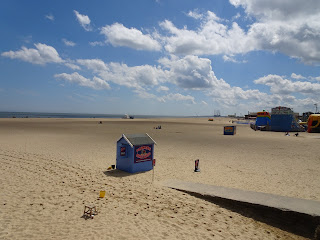 Beer makes everything better.  I headed back to the sea front and walked along it on the beach side.  It was just after lunch and hot and blue.  I sweated into my t-shirt.  The prom was a long strip of old buildings with new plasticky fronts grafted onto the ground floor.  Look above the shiny neon and the strip of signage and you saw a Victorian theatre or pleasure garden tucked away.  Someone had gone to Vegas at some point and drawn inspiration from there, because the arcades had names like The Mint and The Sands - the old Vegas of Dino and Bugsy, before it became a gambling theme park.  The Empire theatre was quietly collapsing and its arched entrance provided shelter for the sleeping bags and cardboard boxes of the town's homeless. 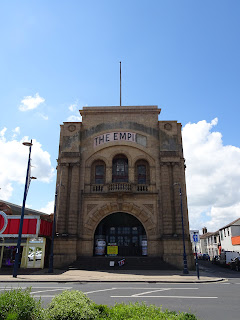 I'm being harsh about Great Yarmouth and it's true that I didn't enjoy it.  It wasn't snobbishness, though - not all of it, anyway.  It was the feeling that the town had sold its soul a long time ago. 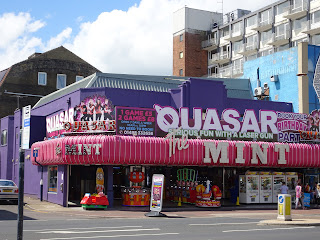 Walking around I felt like Yarmouth didn't know what kind of place it wanted to be.  I'd guess that up until the Sixties it had a swaggering arrogance about it, a like it or lump it presentation while the tourists continued to swarm in.  And then package tours came along and they deserted the town and they didn't know how to react.  It felt like now Great Yarmouth was chucking everything at people in a desperate hope that they'd buy it.  Is it good?  Is it well-done?  Those aren't important questions; what's important is, does it make any money?  It was a velvet trap, but the velvet had long been stripped out and all that was left was the sharp metal teeth. 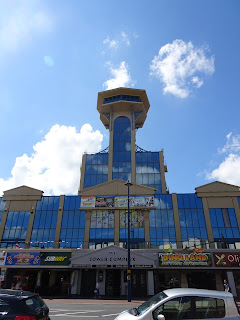 People were enjoying it.  You can't argue with that.  There were happy faces and smiles and laughs everywhere.  I bet there are people who return here over and over, who love it so much, who dream of their week by the sea.  Good for them.  I wish they had better, that's all.  That they were visiting a place that cared about them and saw them as more than pound coins to be dropped into their banks. 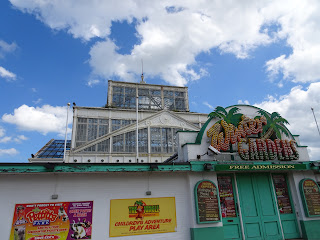 I walked for a while longer, past the rusting hulk of a Winter Garden that nobody seemed to know what to do with, past a plaque commemorating the hotel where Charles Dickens wrote David Copperfield.  A stretch of the prom had been co-opted as a celebration of "Armed Forces Day"; soldiers performing basic maneuvers as a backdrop to the recruitment tents.  Finally I turned back and headed towards the station. 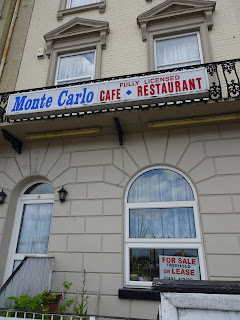 I took the back streets this time rather than walking through town.  I thought about the only other time I'd been to Great Yarmouth, nearly twenty years before, on the boating holiday from hell.  We'd arrived late in the evening, having only just made it across Breydon Water before the tide turned, and tensions were running high.  We went to the town's sole gay bar to try and relax and were delighted to find there was a pub quiz going on. 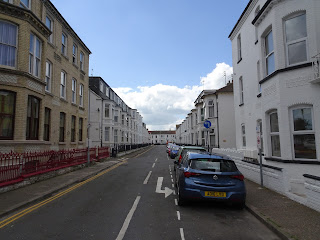 Reader, we won the quiz.  I don't know if you've ever turned up in a strange pub and handily beaten the regulars but it doesn't endear you to the locals.  We won a load of free booze and endured the resentful stares of the patrons as we went to collect it.  As a result, the pints were drunk a little faster than they should've been; we all ended up way too drunk and noisy and the tensions began to burst. 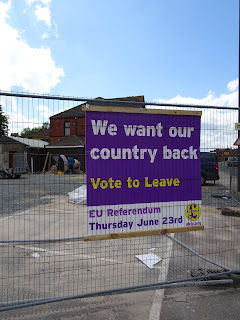 I only learned about the worst of it the next morning.  I was 20 and still not brilliant at holding my booze.  I fell asleep in our cabin while the three other passengers - I'll call them Rod, James and Freddy, to preserve their blushes - exploded at one another and the BF tried to keep the peace.  They crashed onto the quay and screamed at one another.  Yarmouth was bad, but that night, we didn't cover ourselves with glory either.  Yarmouth resented us with good cause.  We slipped out of our mooring the next morning as early as possible. 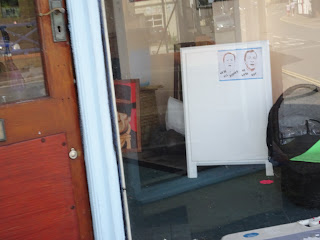 Soon I was crossing the river again, this time on the road bridge, and the station was in sight.  I was happy to see it.  I headed for the train, confident that I would never be back. 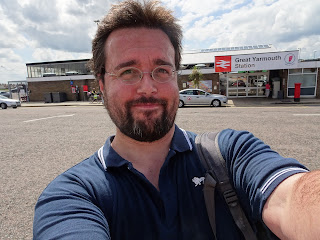