A Farewell To Arms

Here's another part of the post-referendum trip through Norfolk.

I hunted down the guard on the train at Great Yarmouth.  "Can you stop at Berney Arms please?"

He squinted at me quizzically.  "Berney Arms?  Are you sure?"

I smiled and nodded.

You don't get many people visiting Berney Arms.  It's famous for it.

The train coasted out of the station, across the flat empty landscape of the Broads.  Wide open spaces of reeds and water.  Swaying grass, browned in the summer sun.  We began to slow on the approach to the station and I went to the door with the guard.  He looked me up and down.  "You going to hang around for the next train?  It's not for a couple of hours."

"Fair enough."  The train came to a gentle halt and he opened the door.  A wink.  "Last chance to change your mind!"

"I'm alright.  Cheers."  I jumped down to the platform and watched the train disappear to a pinprick. 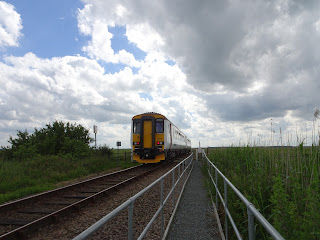 And suddenly I was alone.
Berney Arms is famous for being irrelevant.  There's a diamond of railway lines between Great Yarmouth and Brundall.  On the northern branch, there's stations at Lingwood and Acle; on the southern branch there's Berney Arms, Reedham, Cantley and Buckenham.  Trains alternate whether they take the northern or southern routes every couple of hours.  But Reedham, Cantley and Buckenham are also on the Lowestoft line, so they get twice as many trains as Berney Arms.
On top of that, Berney Arms is nowhere.  There's no road to the station at all.  There's no village.  You can get there by boat, mooring at the pub that gives the station its name, or you can walk there, but why would you? 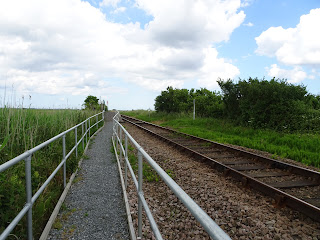 The visitor numbers reflect that.  In 2016/17, the year I visited, it hit a high point of passenger numbers at 1126.  Since then they've plummeted, with 42 people visiting in 2019/20, though that was because the line was closed for most of the year.  Since the pandemic I doubt it's had a single visitor; going there is the very definition of non-essential travel. 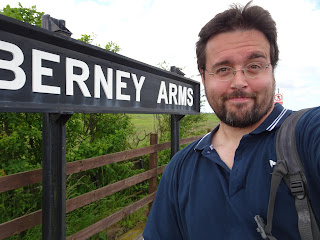 Sometimes these old platform signs hang on thanks to the efforts of heritage groups.  At Berney Arms it seems to have persisted because nobody remembered to take it down.  There is a faded totem sign as well, for completists: 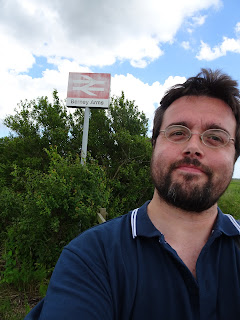 Now I was isolated and alone, the only human being around.  I trotted towards the river across pitted fields with ruts and puddles.  Cows raised their heads to watch me, bored.  The only landmark was the windmill at Berney Arms which slowly grew and grew as I got closer. 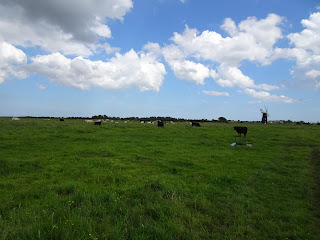 A couple of stiles and I was at the foot of the windmill.  It has been lovingly restored by English Heritage and keeps watch over the confluence of the Yare and the Waveney.  Of course it was closed when I arrived, but it's rarely open; as you'd expect, visitors are hard to come by out here. 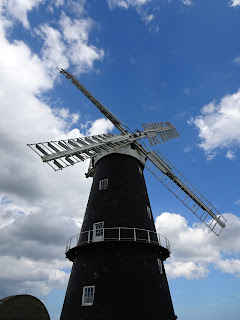 Far more important was the pub.  Ian came here in 2012, but he didn't go to the pub; Robert visited the same year, and he did.  But neither of them are professional alcoholics like me - Ian doesn't even drink, meaning he has to deal with the nightmare of daily existence while sober - so I looked forward to casting my expert eye over beer list. 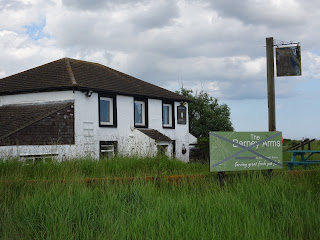 Oh.
Berney Arms wasn't just closed, it was shuttered and abandoned.  The pub garden was overgrown; the concrete full of weeds.  Signs in the window told me that everything of value had been removed from the premises.  It was very much an ex-pub. This was annoying, and not just because I get tetchy when I'm promised a pint and I don't get one.  I was also thirsty and I had only half a bottle of water in my bag.  And I had about three miles to walk, along empty, unpopulated, paths.  This might get difficult. 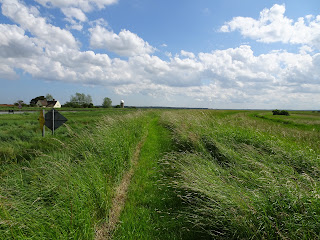 The path soon rose upwards away from the empty marina and onto a wide flat embankment built as flood defences.  For the rest of my walk I'd be a raised figure, a single stick floating above the flat Norfolk landscape.  The Broads are a flat, marshy landscape, the remnants of medieval peat workings lost to rising sea levels, and they mix water and land without differentiating.  A path can turn to wet mush; a field slides into a bog.  And always low, a long stretch of green beneath a blue sky. 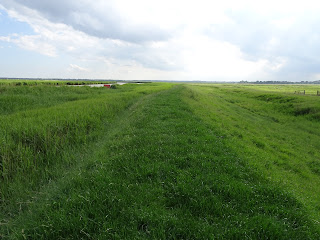 There was nowhere to hide.  The hot June afternoon sun beat down on my face and body.  The sweat leaked from my skin.  I slipped on a cap to try and stop my vast Tefal Head from turning red.  I drank the remainder of my water bottle, slowly, eking it out, but soon it was gone.  Out here there was no phone signal so I didn't know how far along the path I was.  All I knew was I had to follow this long, snaking river, and eventually, finally, I'd reach Reedham. 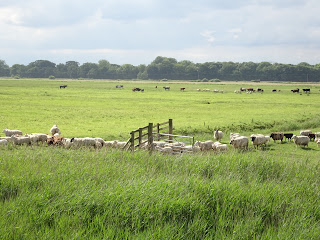 There was the occasional boat, chugging past, its diesel engine providing a thrum to match my walk.  One of them was covered in lads - a stag do perhaps, half a dozen blokes in their twenties with cans in their hand draped across the roof and deck.  Another was far more genteel, piloted by an elderly man in a floppy white hat with his wife sat in the back, looking like Joan Collins at Biarritz. 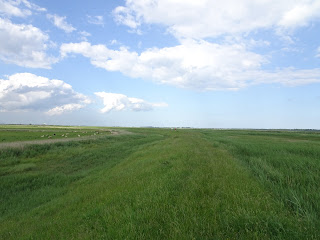 I dropped down and sat on the embankment to root around in my bag.  I was absolutely parched.  Surely there was something I could drink?  At the bottom, I discovered a forgotten treat.  Back in Acle I'd bought a meal deal, mainly for the sandwich and the drink, and I'd picked up a pot of chopped fruit as an afterthought.  It was still there.  I chewed on the apple slices and orange segments, making them last, then tipped the juices that had gathered in the bottom of the tub straight into my mouth.  It was delicious.
For a while I sat there, my legs stretched out in front of me, the hairy sticks looking comically thin between my baggy shorts and my chunky walking boots.  Like a Beano character, knobbly knees poking out at right angles.  I let the gentle breeze drift across the landscape, freshened by its touch from the river, cooling me down.  I closed my eyes under the sun until I started to get comfortable.  Then I clambered to my feet and walked on.
Reedham appeared on the horizon, the ordinary, plain world of humans reappearing in my view.  I went down a side road, surprising a couple walking their dog - they clearly didn't expect anyone to arrive from that direction - and headed towards the bridge.  My phone had once again got the barest signal which meant I was able to find The Ship, down by the river.  I ordered a pint of beer and a pint of orange juice and went and sat in the garden outside.  The orange juice was gone before I sat down. 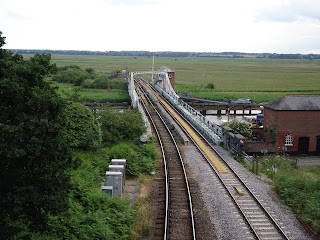 The Ship sits beneath the railway bridge.  It's a swing bridge and still opens three or four times a day - there's a lot of sailing boats on this stretch of the river that are too high to pass underneath.  Plenty of boats were moored up for an afternoon pint, but none that would need the bridge moving.  I watched a pair of dogs play while their owners sipped glasses of wine.  A train passed over the bridge, tooting its horn as it went, and a couple of people in the garden raised their hands in a greeting.  I mulled whether to get another drink and then a later train, but I could feel a stiffness setting into my joints, the familiar sign of my body feeling all that exercise now I'd stopped, so I hauled myself off the bench with a groan and began the walk to the station. 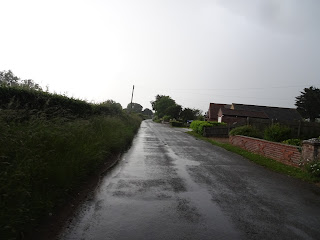 If I were a superstitious man this would be the point where I'd blame the evil spirits for turning on me.  Without warning, out of nowhere, the skies darkened from perfect blue to gunmetal, and a deluge fell on Reedham.  Sudden, heavy, colossal rain, hammering at me, drenching me in seconds.  The drains quickly filled, unused to monsoons, and I was walking in puddles that a few moments ago had been hot bare tarmac.  Worse, Reedham seems to be built on the only hill in the entire county of Norfolk, so I was walking up to the station while water cascaded down and over my feet.  It was bizarre and yet strangely exhilarating.  A turn from perfection to hell in a matter of minutes. 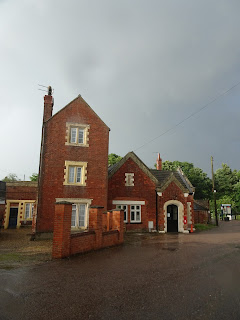 I made it to the station without drowning and hid under the footbridge, listening to the noise of the heavy drops on the metal above my head.  I was drenched but refreshed.  I hoped conditions would be better when I returned in the morning. 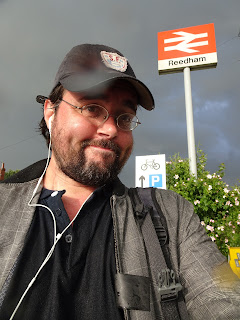