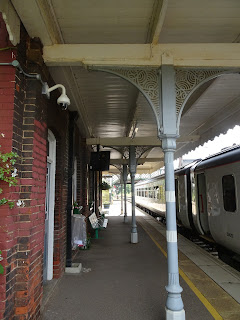 I've said this before but it bears repeating: I'm not really interested in trains.  This causes me to fall between the cracks in railway nerd circles.  I can just about keep my head above water but then everyone starts talking about 882s and their coupling methods and I fall silent and disappear into my pint.  A train is the method to get from one interesting station to another; a train is the thing that justifies a network map; a train is the means to an end.
This extends to other features of transport.  I'm no aviation nerd, but I love airports.  I don't have a car, but I find motorway service stations interesting.  I couldn't tell you the difference between different makes of double decker but a good bus station is thrilling to me.  (I was once on holiday with some friends in Palma and they laughed at me because I took a picture of a bus stop. 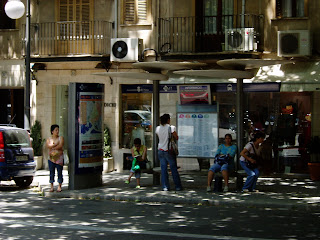 I thought it was a very nice bus stop, alright?).  I like infrastructure, bridges and stations and tunnels and halts.  The rest of it is noise.
That doesn't mean that I won't be intrigued by new and different forms of transportation.  Strange and odd methods of moving about.  Which is why I was returning to Reedham, less than twenty four hours after I'd been flooded out of it. 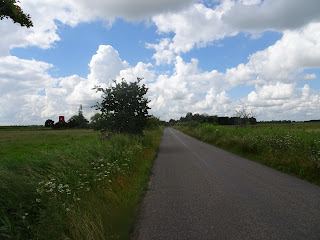 The extensive network of waterways that forms the Broads means, of course, a lot of impediments to land travel.  In most cases this is covered with a bridge, but at Reedham, it has to cross the Yare, the navigable route from the coast to the city of Norwich.  Crossing the river would either mean raising it extremely high to allow boats to pass underneath - a difficult proposition in a landscape as flat as Norfolk, where you don't even have the odd hill to help you out - or an expensive motorised bridge would have to be built.  A railway company could build the swing bridge at Reedham, but for the relatively small amount of road traffic, it was difficult to justify a lifting bridge.
Hence the ferry. 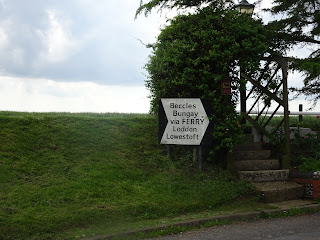 Bungay.  "Lol".
There's been a ferry here for centuries, traditionally the only crossing point between Norwich and Yarmouth, but the current boat dates from 1984.  It's a chain ferry, which means there's a length of chain running under the boat from one side of the river to the other; the chain turns and pulls the ferry across, back and forth. 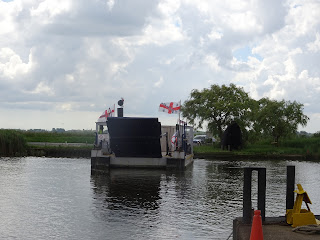 I stood on the bank and waited politely for the ferry to run towards me, its chains clanking like a Victorian ghost.  There's a charge for crossing, of course, as this is a private business, owned by the same family as the nearby pub; for pedestrians it was a more than reasonable 50p. 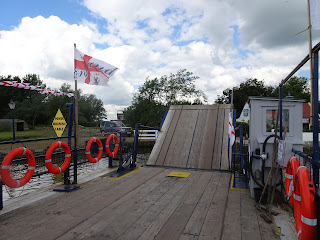 I'd thought that maybe the pilot would make me wait until a car came aboard too - it seemed like a lot of effort to carry just me across - but he waved me on and raised the gangplank and we slid across the water.  It was secure and simple, a gentle drift across the river, and then we were at the other side and the other gangplank was being lowered for me and for the car waiting on the other side. 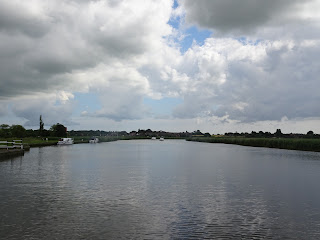 The ferry is strangely separate from Reedham, off to one side, with the only sign of commerce and life being the pub and the caravan park next door.  It's the same on the other side, just a long straight road taking you away; the village hasn't grown to surround the ferry as you'd expect. 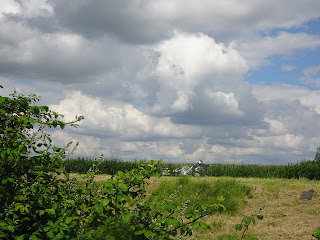 I turned off the ferry road and onto a long, tree covered walk, a length of quiet backroad with the odd discreet gatepost.  There were Private notices and CCTV in operation signs and the odd sweep of a driveway.  As I approached the village of Norton Subcourse, the houses got smaller and closer to the road, with pretty wild flowers on the verges and the odd wooden shelter out front with an honesty box so you could buy freshly laid eggs.  So many egg stands; no wonder people in the country do so much baking - there's nothing else to do with all those eggs. 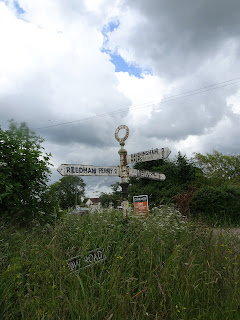 The village itself was typically English, red brick homes and a pub and a church and a stream.  It was Saturday morning, still fairly early, so there wasn't anyone about.  People were enjoying their summer lie in.  There was the gentle waft of a breeze keeping the heat at bay and a slight scent of farmyard.  I took a back road, walking between a strange array of seemingly abandoned vehicles - a Jaguar, an old Ford, a Vauxhall estate covered in green mould.  The road kinked and bent until I was finally able to step off the tarmac and onto a footpath. 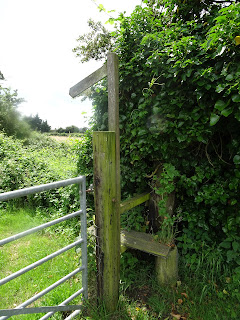 Walking on the road is fine in towns.  In the countryside, though, I want to break out of where everyone else is, to find a route that's less obvious.  Somewhere I can be isolated and quiet. 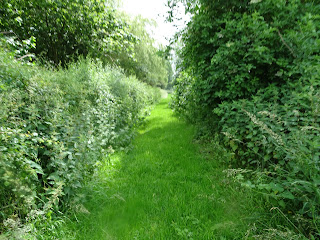 For a while the path was well-trodden.  I guessed this had something to do with the Danger - Deep Water sign pressed against the fence.  Somewhere in the woods beyond there was a pond, somewhere to swim on a hot day, and I imagined it was very popular with the village youth.  After that though the path narrowed and became less well-kept.  Stinging nettles began to crawl over the walkway and batter at my exposed legs; I didn't have any choice but to push through, stomping them down where I could, feeling the tick and tuck of their bristles against my skin. 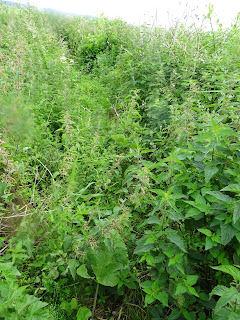 Suddenly it opened out.  I turned a corner and I was on the edge of a muddy field.  That deluge I'd endured the night before had filled the tractor marks and squashed down the soil.  I followed the path as best as I could, tumbling back and forth, and following the edge of the field.  There was a small ditch and on the other side was a field of horses.  They saw me approaching and trotted over expectantly, not seeming to notice the hedge in between us.  I waved a little guiltily at them as they slowly realised I wasn't coming to bring them a treat. 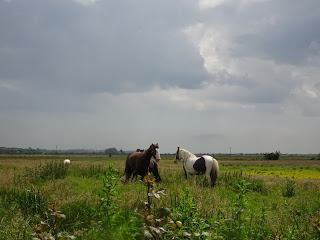 A hop over another ditch and I was in a field of cows.  Unlike the horses, they showed no interest in me whatsoever, continuing to mind their own business.  Some of them were standing and some of them were lying down and I tried to work out what this meant for the weather. 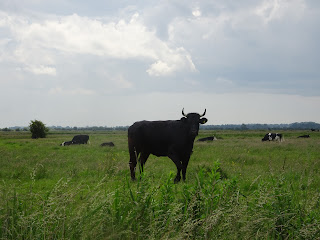 I crossed a drain on a rough concrete bridge and ended up at the foot of the railway embankment along the Haddiscoe Cut on a wet service road.  I sank into the mud as I walked. 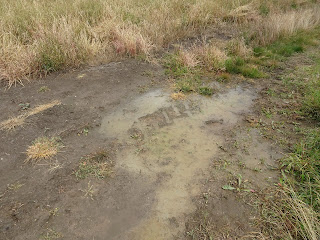 In the late eighteenth century, the only way to get goods from the sea to Norwich was along the River Yare.  However, the shallow Breydon Water meant that boats couldn't simply head straight inland, and so they had to be loaded onto smaller boats at Yarmouth.  The harbourmen at Yarmouth took advantage of their position and charge outrageous fees - as well as slipping some of the goods into their own back pockets - so the good burghers of Norwich proposed a new canal to allow ships to travel up from Lowestoft instead.  Hence, the Haddiscoe Cut; a long straight canal which would avoid the loops of the Waveney and would, in combination with dredging across the area and a new sea lock in Lowestoft, allow them to avoid Yarmouth altogether. 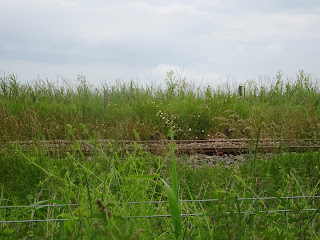 As with most canal construction in the 19th century, it was too late to make any money.  Traffic was lower than expected and they couldn't afford to repay their debts.  The Norwich and Lowestoft Navigation Company sold it to a railway company, who built a line on its southern banks and effectively removed its reason for existing in the first place. 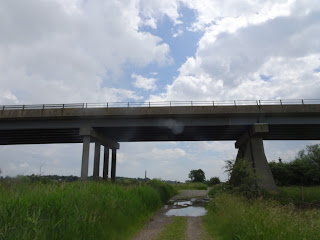 I walked under the road bridge for the A143, a high flyover that wouldn't look out of place in Birmingham, and then down a side road to Haddiscoe station.  There was a car park and a red phone box.  Inside it a notice advised users that BT proposed to get rid of it, but they'd sell it to the community for £1 if they wanted it.  (I looked on Google Maps and it's still there, so either the village clubbed together for that quid, or BT couldn't be bothered sending a crane out for it). 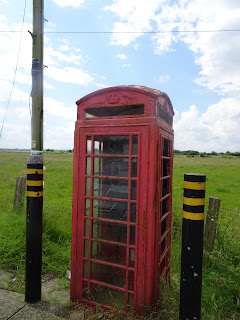 I had, somehow, managed to turn up at Haddiscoe at the exact point where I would have the longest possible wait until my train.  There was a single platform and a shelter with a bench still wet with rain so I sat on the floor and waited. 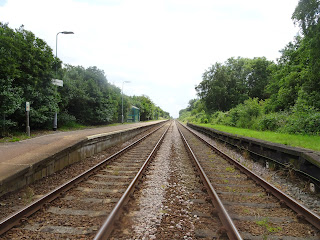 There was nothing else to do.  The village of Haddiscoe is on the other side of the cut, a mile's walk away over that high bridge; by the time I'd got there, it would be time to return, and there wasn't a guarantee there was anything worth seeing anyway.  There was a row of railway cottages behind the station but their green, overgrown front gardens implied a private world I didn't want to intrude on. 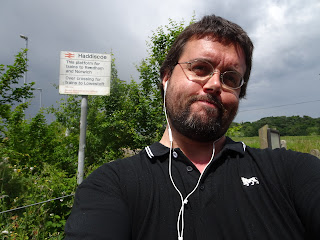 So I sat there, listening to some music on my phone, watching the clouds burn over me.  Feeling the sun.  Drifting.  Sliding away into relaxation.
By the time the train arrived, I'd gone.  My brain had slipped from "active" to "passive" mode.  I was lazy and tired. 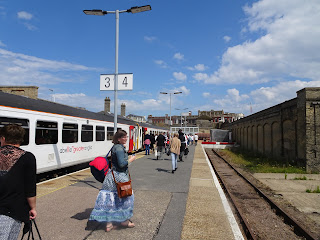 I'd planned on spending the afternoon in Lowestoft, exploring the town before returning to Norwich.  So had a lot of people, apparently; it was a Saturday in June and the train was busy.  I realised I didn't want to do much.  I was still tired from the walks of the day before and Haddiscoe had killed what was left of my ambition. 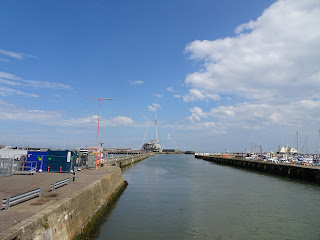 So I'm sorry, Lowestoft, but my entire sum total of impressions of you is based on everything within about a ten minute walk of the station.  Mind you, I spent loads of time in Great Yarmouth and I hated it, so you might have got off easy.  There were the docks of course, with an interesting looking raising bridge crossing the cut (again, I'm infrastructure obsessed).  There was a beach and a pier and an extent of gardens.  It seemed popular and lively and cheery. 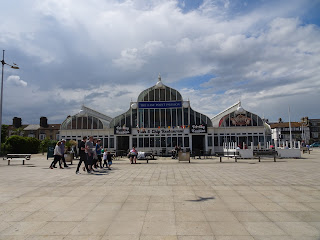 But I couldn't be bothered.  I circled back over the bridge and into the town centre, which was like every other town centre in Britain, and I found a Marks and Spencer and filled my backpack with goodies from the Food Hall.  Then I headed back towards the station again. 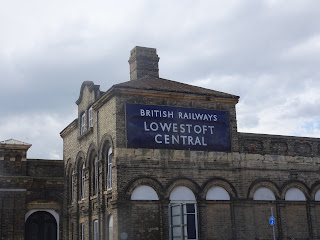 Lowestoft (no longer Central) station does, of course, have one major claim to fame; it's the most Easterly station in Britain, managing to pip Great Yarmouth's by being that much closer to the coast.  There's a plaque commemorating this fact on the wall.  I idly wondered where the most northerly and southerly and westernmost stations were, and what it would take to cross them off the list, and then I realised that station collecting is an addiction. 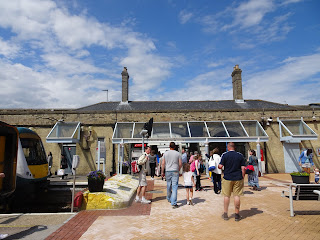 I returned to the platform three quarters of an hour after I'd left it.  I'm sure I missed a lot; I'm sure I could've thrilled to this gem on the Suffolk coast.  Instead I went back to my Travelodge in Norwich and had a nice little nap. 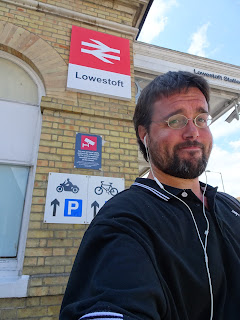 I'm sure your failure to fully sample Lowestoft will be a source of regret for the remainder of your life!