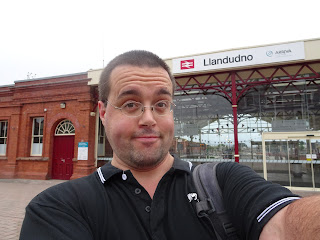 It was early, too early, and I'd slipped out of the Travelodge with my backpack of clothes and walked across a silent Llandudno to the station.  Llandudno is not an early morning town; there was no hustle of commuters or throng of coffee shops open for shift workers.  It was still sleepy.  A little like me.
I was so early, in fact, that the booking hall wasn't even open.  Luckily I'd ordered all my tickets in advance so I didn't need to buy a new one.  I entered the station via a side entrance by the car park. 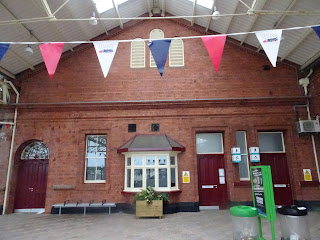 Like a lot of seaside termini, Llandudno was built for throughput.  Long platforms butt onto a wide open concourse with a recently added glass front.  Send the hordes straight through and out the other side with as little fuss as possible.  I walked down to the exposed platform and waited for my train south.  I only had one stop to travel right now. 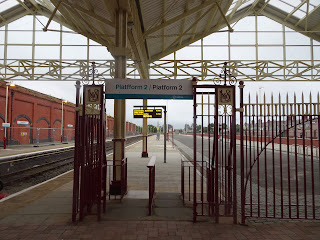 Deganwy is the only intermediate stop on the branch from the North Wales Coast Line to Llandudno.  It felt like a town that had once tried to be seasidey too, maybe getting some of the people who couldn't afford Llandudno proper, but had since given up and become simply a quiet coastal spot. 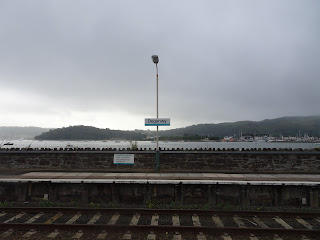 The station was wedged into the sea wall, overlooked by a row of shops and a car park.  I was the only person to get off here, of course, and I trudged across the tarmac. 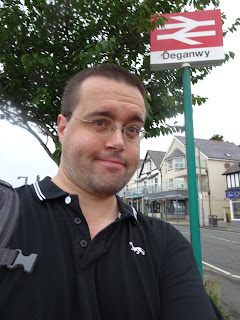 The A546 burned alongside the railway, but I took a side path.  Jutting out into the Conwy estuary was an enclave of new, modern homes and apartment blocks, grouped around a marina.  They were, in truth, astonishingly ordinary, but their single entrance point and the yachts they surrounded gave it a low-rent glamour, like a Welsh Howard's Way.  The developers had clearly been persuaded to put in a coastal path as part of their planning permission and it was meanly provided, slicing between a high wall and the railway line and fizzing with resentment.  There was the occasional jogger, but I mostly had it to myself. 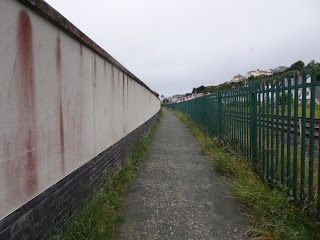 Past the apartments the view opened up and I could see across the river to Conwy castle, a fairytale construction, barely seeming real.  Above it squatted a grim looking grey cloud.  The further south I'd gone from Llandudno, the chillier it had got, as though the bad weather was waiting for me.  As I reached the head of the Conwy Tunnel it broke.  Suddenly I was pelted by heavy raindrops, the cloud seemingly dropping all its water on me at once.  I wrestled with my bag and pulled on a coat by I was already wet through. 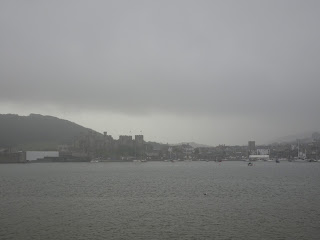 It did mean that the excitement of crossing the Conwy Tunnel itself was slightly muted.  The A55, a motorway in all but name stretching from Chester to Holyhead, used to slow to a crawl when it hit Conwy.  The ancient town was far too historic to be bulldozed for a dual carriageway, but the only crossing point for the river was via its bridges, so they had no choice. 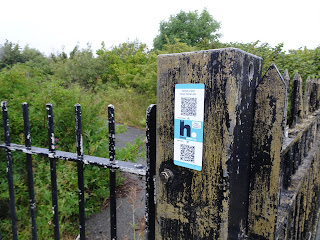 Finally in 1986 construction began on two immersed tube tunnels; basically two long boxes dropped onto the river bed and then connected to the road at each end.  It was a marvellous engineering achievement and opened in 1991.  I was walking on an artificial headland constructed to form the tunnel entrances, passing over the road traffic itself, and that will always give me a little frisson of excitement. 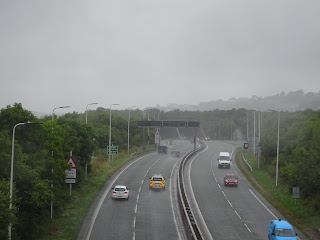 With over two hours until my next train, and the weather doing its best to drown me before I got there, I gambled that Conwy would be a little more lively at this time of morning than Llandudno Junction and turned right onto the the causeway instead of left.  I'd not eaten yet; I'd forgone the overpriced Travelodge croissant and orange juice breakfast, and nowhere in Llandudno had been open for me.  I wanted a warming cup of tea and maybe a bacon roll. 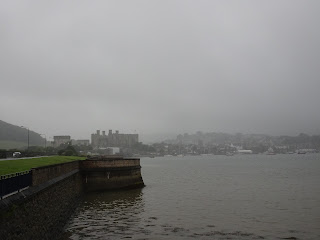 The rain battered me across the headland.  It blurred my glasses so much I took them off; it's easier to squint through storms than to have your vision completely impaired.  I dodged the roadworks that were making the Conwy Bridge distinctly utilitarian looking and plunged into Conwy town through the gate in the town walls.  Sadly, it looked like Conwy was as quiet at that time in the morning as Llandudno, but luckily the Costa had just opened.  The barista was unloading boxes of coffee and syrup and looked bemused at my dripping wet hair and coat, but I still managed to get a large tea and a sausage bap and I sat near a radiator and dried. 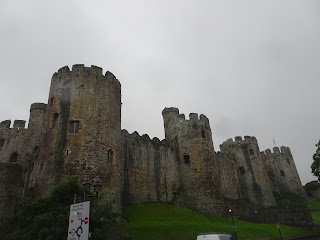 Filled with pork and PG Tips I retraced my steps back over the bridge.  I'd walked this way before, in 2011 when I did the North Wales line, and little had changed in the intervening years.  Perhaps Llandudno Junction was a little shabbier, or perhaps I'd walked a different way.  I'd ducked down below the main road and walked silent side streets with boarded up buildings. 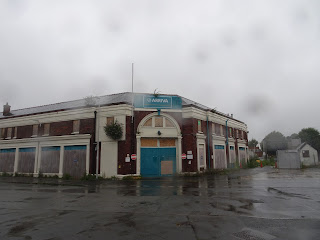 Yes, it was still raining, though it had slowed to a trickle, a relentless wash of water speckling your face and body.   I ducked across the car park to reach Llandudno Junction station and went inside. 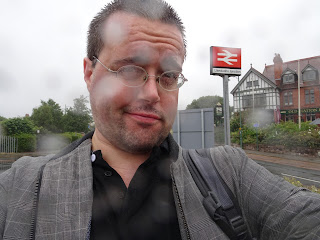 Llandudno Junction is not a destination.  It's a crossover point.  It's designed to be experienced at platform level only, as a place for people to change trains.  Even then it falls down.  It's a cold, bare station.  The wind whistles into its open spaces and the rain comes at you from all angles - sometimes through the roof itself.  It wasn't a place to spend any time. 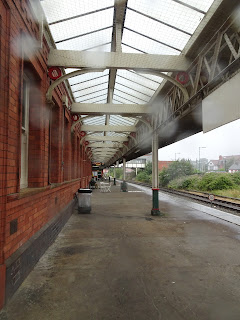 Unfortunately, I had ages to wait until my train south.  Instead, I leapt on the train north to Llandudno, the train that would actually turn into the one I wanted, simply so I could have a bit of warmth and a comfortable seat.  Across the aisle from me a man in shorts, fresh from the gym, was eating a tin of tuna with a fork.  When he'd finished protein loading, he reached into his bag and pulled out another tin and started on that.  In the meantime, the rest of us got to enjoy the distinct scent of fish wafting down the carriage. 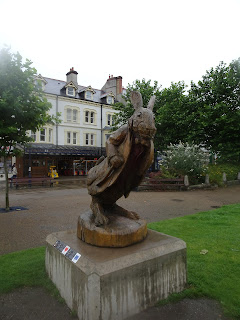 At Llandudno I walked out of the station with everyone else, because I didn't want the train people to see that I was loitering.  This is absolutely what happens; station staff love to stare at middle-aged men and judge them on their travelling choices.  Instead I walked round the block then back in the station in time to board the same train I'd just come in on and head to Glan Conwy. 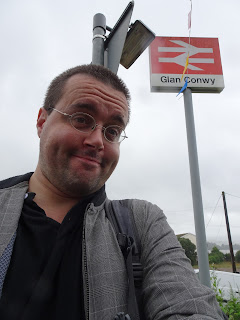 No, I'm not going to make a cheap glans joke.
Now I felt like I was in proper Wales.  Above the A55 it can be a bit like England with an accent.  Now it seemed like I had slipped into the proper, rural Wales that you imagine. 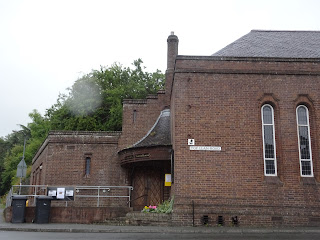 Admittedly, Glan Conwy wasn't the most charming place on earth.  It was a little bit grim and utilitarian, wedged against the wide river.  Homes cascaded down the hillside.  The pub was in the process of being redeveloped into homes.  There was a tiny village shop, and a playground, and that was about it.  I'd seen pretty much all of its charms in five minutes.
Which was handy, because I soon had to be out of there.  I had a bus to catch. 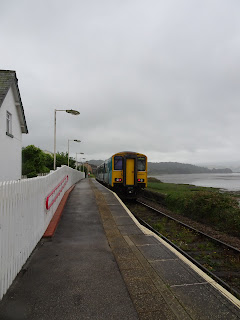 Tuna. From the tin. On a train. What kind of gross vulgarian thinks that is acceptable behaviour?

Alan Bennett once wrote "A lot of what's gone wrong with England is that it's got too common". QED.

Glad to see you're back, if only 'virtually'!