Back in July 2016 I worked my way down the Conwy Valley Line, from Llandudno Junction to Blaenau Ffestiniog and then on to Porthmadog.  This journey was for a book which, sadly, I never actually wrote.  However, I did make copious notes and took dozens of photos, and since it's 2020 and the idea of travelling anywhere at all is a pipe dream, I've decided to write it up at last.  Remember that this is all taking place four years ago, so things might be different now - there's a new rail operating company for starters - and also I'm dredging my memory so there may be some errors.  Be kind.  It's the first lot of content on here in months. 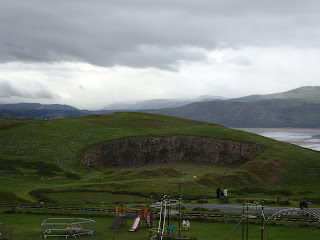 I headed for the cafe at the top. a squat white building decorated with mobile phone masts.  The smell of chip fat hit me long before I got there.  Not the good kind, the inviting, tantalising scent that wafts from a chippy on a Friday night, but the dark scent, tinged with burning, so greasy you can almost taste it on the air.  It's the smell of oil that lingers in the furniture of the cafe and you wipe off the plastic menus.  It was off-putting, but not as off-putting as the prices, chalked up outside.  You go to the top of the local landmark, you have a cup of tea, and you get thoroughly gouged.  I flounced away, walking back down to the visitor's centre attached to the tram stop.

Inside it was dry, a respite from the fine rain that had whipped across the summit and sprayed my glasses, but the exhibits were very much aimed at the younger generation.  Lots of bilingual signs with colourful fonts and buttons to push and knobs to pull.  I was at least thirty years too old for it, and besides, there was a man in there with body odour so strong it left me light headed, so I walked back to the tramway and headed down again. 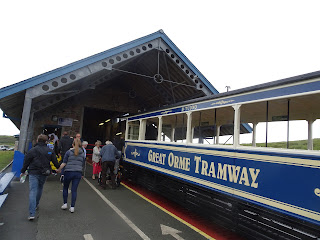 The Great Orme Tramway has clanged its way from Llandudno to the peak for over a century.  I managed to get a seat, a hard wooden slat that I felt all the way down, and the rest of the carriage filled up with a gang of boy scouts.  They wore their scarves over their regular clothes and an anxious looking leaded counted and recounted their heads to make sure one hadn't been left behind.  The cable-operated tramcar slid down the peak, creaking, groaning, jerking around, until it reached the half-way station and we all got out and trooped over the rubber floor to a second tram to take us down into the town. 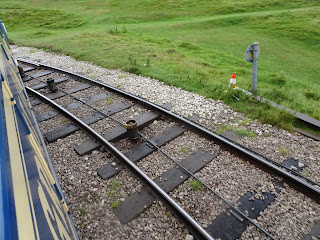 The last few hundred yards of the tramway are through the streets of Llandudno itself, weaving down the centre of streets that look far too small to cope with traffic and pedestrians and then a tourist tram as well.  People waved as we passed until we finally settled in at the terminus and I could stiffly get out and walk down into the town itself. 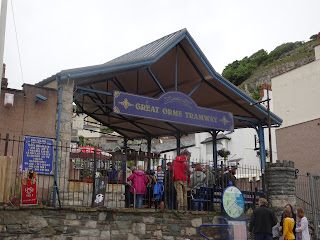 The plan was to travel from top to bottom, right across North Wales to the middle, taking in all the stations from Llandudno to Blaenau Ffestiniog and then a trip on the preserved railway down to Porthmadog.  I thought it only right to start the trip on the Great Orme tramway - go as far as I could on the iron road then change to a more modern railway.  Ride the helter skelter right from the very top.  That was for tomorrow, though; today I was wandering round the resort. 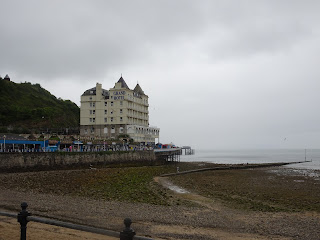 Cards on the table: I love Llandudno.  It's the grandest and best preserved of all the North Wales resorts.  Rhyl has a certain vulgar charm, and Bangor is certainly beautiful, but Llandudno still feels like a special place.  It sits on its own headland, shielded by the Great Orme to one side and the Little Orme to the other, with the grand sweep of the bay connecting the two.  The front is lined with tall white-painted guest houses and hotels and there's a pier and a promenade to be proud of.
I walked on the red tarmac front among the holidaymakers and pensioners.  There was a loud group of American teenagers, wearing baseball caps and matching sweatshirts with their school's name on them, bellowing at one another.  A combination of natural teenage ebullience and innate American excess meant you could probably hear their conversations in Anglesey.  I wondered what had brought them thousands of miles across the Atlantic to a Victorian coastal resort; perhaps they were on a visit from Liverpool or Manchester, following the traditional path of Northern day trippers along the coast. 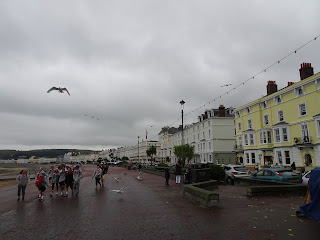 Behind the front, you hit more standard shopping streets, laid out in a slightly curved grid with grand avenues striding down the centre.  There are cafes and bars and restaurants mixed in with the shops, a little faded, but still charming, then on the furthest stretch you hit the Venue Cymru, the town's theatre-cum-conference centre.  There were posts along the front plugging the entertainments - The Rocky Horror Show with Rhydian, The Three Degrees (without Sheila Ferguson), Tommy Steele in The Glenn Miller Story.  Also scattered around the town were Alice in Wonderland-themed statues. 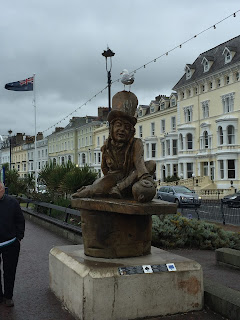 The link between Alice in Wonderland and Llandudno is... tenuous.  The Liddells - the real life Alice's family - had a summerhouse, and it's theorised that Lewis Carroll may, possibly, have visited them there.  The town also claims that Through the Looking-Glass was inspired by them, because it's based around a chessboard and Llandudno's grid plan looks like a chessboard, sort of, if you go up to the top of the Great Orme and squint.  It's all a bit shameless but they've taken this limited claim to fame and run with it and so they've scattered Alice statues round town for you to find and collect. 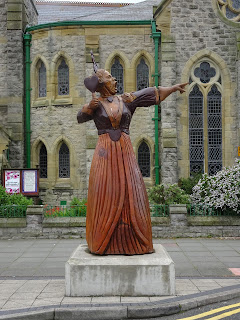 They are at least beautifully made statues.  I wandered back through town, pausing in a pub for a plate of pie and chips and a pint.  I had got a room in the Travelodge.  I know technically I should've gone for the boarding house experience for a proper Llandudno experience, a building on a side road with a fearsome landlady and a curfew and a TV lounge, but I couldn't bring myself to try it.  At least with a Travelodge you know what you're getting and it'll be clean and reasonable.  I went back to the hotel to rest for the night.  I had an early train in the morning, and a lot of walking after that.  The Conwy Valley line was ready to be collected.
Posted by Scott Willison at 14:01

Brilliant to see you back. I know it's not possible to be out and about but this is a nice gateway to what will be possible again.

Thank you Scott, this has brightened my day in locked-down Melbourne. I was in Wales in October 2016 and visited Llandudno and Conwy, both on my list of favourite places.The Bronze Age copper mine near the halfway point of the tramway is well worth a visit, if you haven’t already.

It's great to see you posting again, that was an enjoyable read.