Eight and a half years ago, I got on a train to Tonfanau.  It's a request stop so I dutifully asked the guard to stop at the station.  She corrected my pronunciation.  And thus, another anxiety was born.

It is the height of disrespect to mispronounce a place name simply because you're a boring old Englishman who speaks only one language.  On the other hand, Wales, give us a break.  My next destination was Tal-y-cafn station, and who even knows?  I stood at the bus stop and ran pronunciations over in my head.  Tallycafn.  Tal-E-Cavn.  Tellistdatnecag.  When the bus arrived, I stood in front of the driver and strongly and confidently asked for a single to Llanrwrst.  I could get off early.

The bus clattered around the back lanes from Glan Conwy.  The quickest route is straight down the A470, but there are hamlets hidden in the hills so the bus went in search of them.  The driver was only paying half-attention the whole time.  He'd propped his phone up on the wheel and was playing a fruit machine game, idly tapping at the arm, watching the wheels spin, then tapping it again.  It added a frisson of danger to every corner, every upcoming tree, every vertiginous drop off the side of the road.  I hadn't really planned on plummeting to my death in a single decker but, hey, sometimes life throws these options at you.  I was glad to ding the bell and jump off at Tal-y-Cafn station. 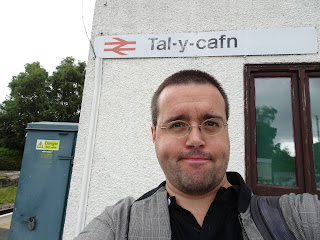 The problem was that now I had a two hour wait at a lonely station.  The building on the corner, which I guessed was a pub at one point, was being redeveloped into a large grey house.  Beyond that there were a couple of houses and the River Conwy beyond. 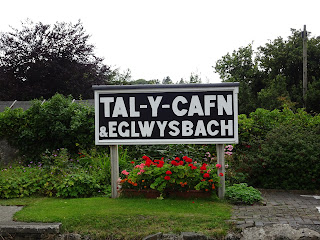 I looked at that old sign.  Firstly I was glad I'd not had to try and say Eglwysbach.  But secondly it made me think: if a railway company added a suffix to the station name in the old days, it was usually a much larger village that was close by.  I brought up Google Maps and discovered that, yes, Eglwysbach was up in the hills, and a relatively short walk away.  I could easily make my way up there, have a look round, then wander back down to the station before my train south arrived. 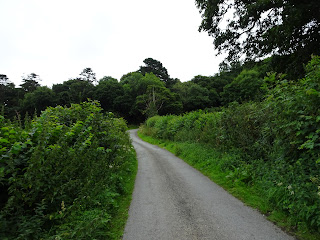 About eight minutes later I was regretting this decision.  The roads went up, relentlessly, a steep but continual climb to get me away from the low of the river.  It made my calf muscles tense and my ankles ache.  The reward was, of course, the view, as I caught glimpses of valleys and farm houses stretching into the distance, still wet and green from the morning's rain. 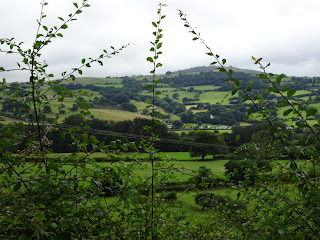 I passed some abandoned farm buildings which will no doubt be turned into a holiday home any day now and then turned into the village of Eglwysbach.  Low bungalows hugged a silent main street with a plain church the only landmark.  It was peaceful, almost aggressively so, with no cars or pedestrians.  The kind of place kids are desperate to leave and pensioners are desperate to go to. 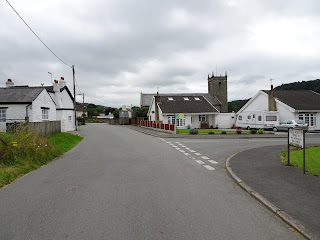 My OS Map app had shown me that there was a footpath through the woods to take me back down towards the station, so I crossed a stream by a single slab of rock and disappeared into a woodland.  It was a carefully laid out path, with wooden bridges to take me over the meanders and plenty of space to move.  Well-trodden from dog walkers and hikers and, judging by some of the litter, Eglwysbach's more rebellious teens. 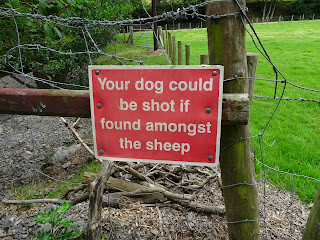 Soon I was back on the road to the station, only downwards this time, trying not to slip on the wet tarmac and being able to take in the view.  Wales is an astonishingly beautiful place.  No wonder half of England wants to buy it up for weekend cottages. 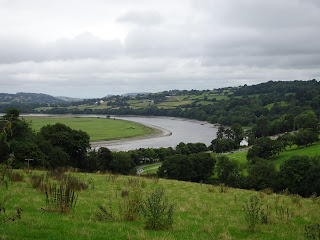 That brought me back to the station with plenty of time to spare.  I settled in on the bench and put on a podcast and let myself drift for a while until the train came. 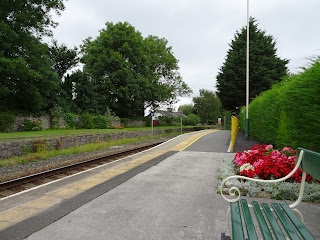 My plan at Dolgarrog was that I would cross the Conwy via the footbridge by the station, then head south via the quiet roads on the far side of the river.  I was out of luck.  The station was swarming with Network Rail employees, all suited in bright orange and politely waiting for the train to pass so they could resume their work.  The footbridge was blocked by a nylon mesh.  It looked temporary, and if I'd hung about they'd have probably packed up and gone, but I didn't want to risk it.  Instead I walked up to the main road. 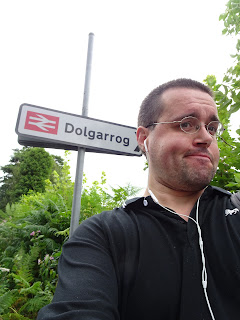 The A470 is a busy road.  It joins the two principal routes across North and Mid Wales, the A5 and the A55, and it does so without taking you over the mountains.  It also doesn't have a footpath.
My heart pounding, I wedged myself in the hillside as much as possible.  Brambles scraped at my arm.  Stinging nettles beat at my legs.  Every now and then a truck would go by and I'd cower, dust blown in my face.  Every passing place and driveway was a blessed relief from the relentless stream of traffic.  After a while, a gravel drainage channel appeared on one side of the road, so I darted across and walked on that.  It was uncomfortable but at least the cars didn't need to avoid me.
I was starting to wonder how much longer I could do this.  It was three and a half miles to Llanrwst, about an hour's walk, and the stress was really getting to me.  It was horrible. 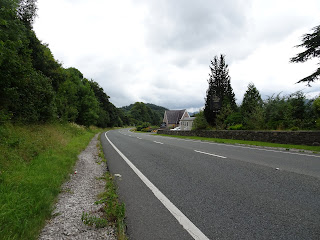 And then - salvation!  A bend in the road revealed the Maenan Abbey Hotel, but, more importantly, a bus stop.  I practically ran to it.  There wasn't a timetable that I could see but it didn't matter; there was a point where I could pause and think and decide what my options were.  I was about to pull my phone out to look for bus times when, even more wonderfully, the bus itself came round the corner.
"Sorry I'm late, love," the bus driver smiled at me.  It was a woman this time, and her steering wheel was free of mobile gaming.  "I should've left Betwys ten minutes ago."  If she'd been on time, I'd have missed the bus altogether.  Relieved, I collapsed into a seat, and happily rode into Llanrwst. 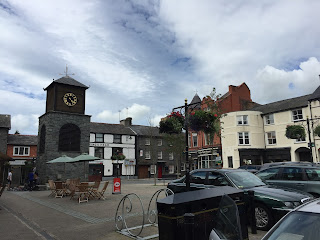 I fell in love with Llanrwst suddenly, and deeply.  I don't think you have an option in this.  Any rational person would see its pretty Victorian streets, its scenic shops and cafes, its happy residents, and immediately think "yes.  This is the place to be."  I walked from the bus stop, through the tightly curved roads, to my hotel.  It was a stone fronted, traditional place, quite the change from my Travelodge of the night before.  Put it this way: there was a suit of armour in reception.  As I checked in, I became aware that the other residents were far better dressed than me; a wedding party, boisterous, joyous, excited.  I went up to my room and found a pair of complimentary ear plugs on the bed. 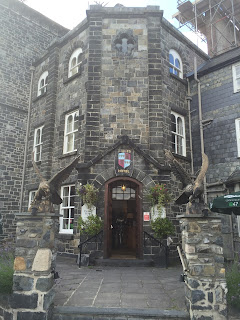 I showered and changed so I'd look at least slightly decent then ventured out.  I had one final train to catch.  Despite having a population of barely 3000 people, Llanrwst has two railway stations.  I walked out of town towards the older of the two, North Llanrwst, following an A470 that had been tamed as it passed through, with pavements and curves.  The shops fronts were delightfully old fashioned - tiled entrances, glass curved windows.  There was a Milk Bar that practically made me clap with joy. 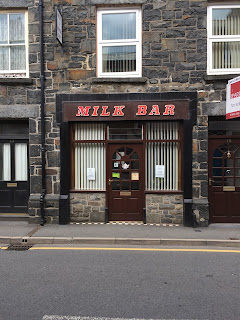 It's been four years since I passed that place but I sincerely hope it's still there, looking exactly the same.
For a century North Llanrwst station was simply Llanrwst.  In that arrogant Victorian railway builder's way, they'd put it out of town, and waited for the locals to simply move closer.  It never happened.  Eventually, in the Eighties, British Rail opened a new halt close to the centre of town, and the old station acquired its North prefix.  It's tucked away down a side road, surrounded by industrial works, the only bit of charm in a grimy corner. 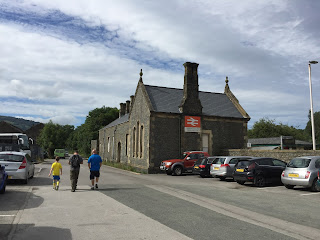 The station retains some of its importance as it's the only passing place on the Conwy Valley line, and as such, the only station with a platform on either side of the tracks.  This is why the service is so limited; for most of its length, you can only run a single train. 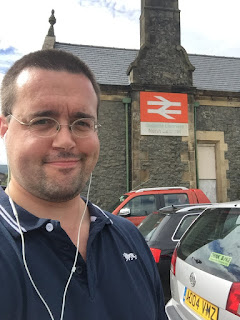 Llanrwst's inherent loveliness extended right up here.  On the platform it was calm and leafy.  A plaque informed me that it had been adopted by Soroptomists International Dyffryn Conwy; a quick search reveals that they're a sort of female equivalent of the Rotarians, although with a little less nod and a wink favouritism.  It also reveals that it's actually spelt Soroptimists; I can imagine the poor lad at Arriva Trains Wales was so used to red spellcheck underlines in his documents with all those unfamiliar Welsh names he simply disregarded them all. 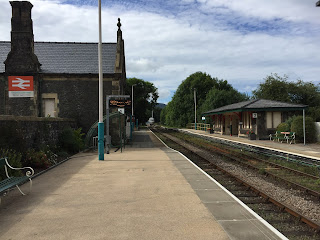 The train soon arrived and took me the half a mile south to Llanrwst station proper.  As you'd expect from something built by British Rail in 1989, it was deeply perfunctory.  A single platform in a cutting, no station building.  I left it and kept my head down as I passed under the sign.  I realise this is daft but I'd decided I was going to collect this station properly the next morning, when I left town.  Doing it now would've felt like cheating. 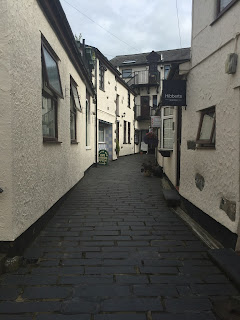 I thought I'd find a shop to buy a sandwich, a little Co-op perhaps, but then I decided to treat myself.  There was a chippy near the main square, wafting the beautiful scent of fried food out at passers by, so I popped in and got myself a sausage and chips.  The teenage girl behind the counter bellowed my order into the back in Welsh, then carried on chatting in English to a customer, switching back and forth so easily it left me full of admiration.  I took the hot package of delicious food and headed down to the river, crossing to the far bank beneath a restaurant terrace, and I sat on a bench and tucked in. 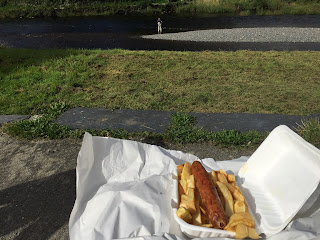 For a while I watched a fisherman in waders idly casting his line.  The sun warmed me and made me sleepy.  I'd been awake for hours, I'd walked and hiked and clambered all over the place, and now my body was enjoying the rest.  I felt the stress fall away with each warm chip. 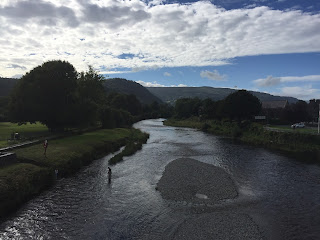 I walked back over the bridge to my hotel.  I thought I'd go up to my room and finish my podcast and then maybe some telly.  As I walked in though, I spotted the hotel bar was empty; presumably the wedding had its own function room.  I swerved inside and ordered a beer.  "Take a seat and I'll bring it over," the barman advised, and I stepped out onto a terrace overlooking the Conwy.  He delivered my ice cold lager and I started to wonder if I was too young to retire to Llanrwst. 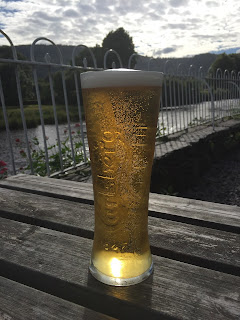 Stuck in England during lockdown, it seems you visited my neck of the woods for this part of your journey. Llanrwst is special isn't it, and Eglwysbach one of the words that it took me an age to learn to say when we first moved to Maenan, just down the road from it.