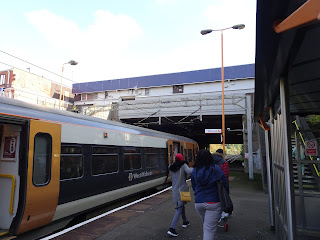 Perry Barr was ugly.  There's no other way of putting it.  I'm a great supporter of British Rail's 1960s stations, built as electrification swept the country - your Coventry, your Stafford - but Perry Barr was done on the cheap.  It was concrete above the tracks, it was concrete by the tracks.  There were metal fences by the steps and you stepped up to an overbridge wedged behind the dark ticket office.  It was how I imagine it must be to get transported to prison by train. 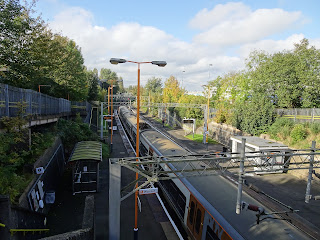 Step outside the station and you're in a parade of grim shops, trapped on a dual carriageway, with a flyover blocking out the sun.  Barriers hold you onto the narrow pavement.  A homeless man begged for change in the doorway.  It was dystopian. 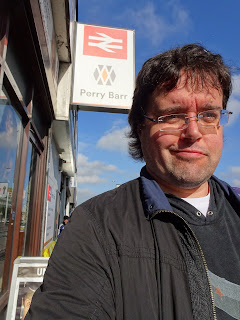 The one good thing about Perry Barr station was also a symptom of its neglect.  Above the doorway was a real old British Rail sign, a weird mishmash of styles that had somehow clung on through decades of rebranding.  It was all-caps, which was a no-no in later BR rules, and I'm not even sure if that's Rail Alphabet.  I'd guess it was from a period when British Rail was still a bit loose with how it applied the rules, and then for fifty years, it's entirely passed under the radar.  Someday West Midlands Railway will replace it with a huge piece of laser printed steel that has Perry Barr in big letters and the corporate logo front and centre, and that'll be sad.  In the meantime, enjoy it while you can. 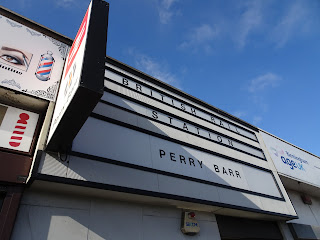 I threaded my way through the busy pavements and across the road to the One Stop Shopping Centre.  Don't be deceived by appearances; it may look like a miserable 1980s shopping arcade, but it's actually worse than that.  The One Stop Shopping Centre is a retail park with a massive Asda and outlet shops built surrounding acres of parking, and this run of glass is merely a front so the entrance from the bus exchange looks half-decent.  It is nothing. 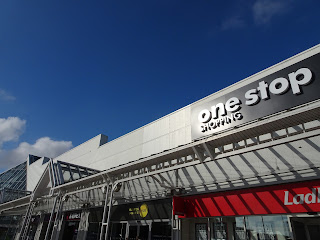 I walked past the succession of bookies and round the side, to where the delivery bays opened out onto the street frontage.  There was an unusual sight under the flyover; a man dressed in full John Bull garb talking to a journalist on the central reservation.  My heart sank as I wondered what nightmarish Brexit lunacy he was peddling, until I saw his sign: God Bless Our Flyover.  It seems the Perry Barr flyover's days are numbered, with the council planning to demolish it and calm the roads to improve the area ahead of the Commonwealth Games (the nearby Alexander Stadium will be the main location for the athletics events in 2022).  Only in Birmingham would people be fighting for a flyover; anywhere else in the country people would be grumbling about its existence.  There were no men in giant hats campaigning for the Churchill Way flyovers in Liverpool to be preserved, put it that way. 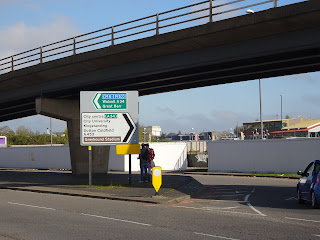 I choked back the traffic fumes and turned down a side road by a pub, the Seventh Trap, a low squat building that could be open for business or abandoned - I suspect it looks pretty much the same either way.  A bunker with barred windows.  I was heading for a small side road, really an access route for the backs of people's houses wedged alongside the River Tame.  A sign warned me there was No Dumping - £20,000 Fine, a sign which was comprehensively ignored by everyone. 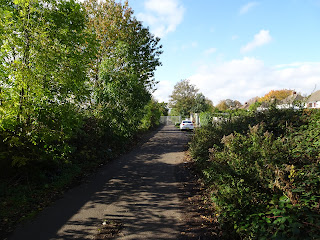 I walked past the mattresses, fridges, and general building waste that had been dropped in the hedgerows.  Around halfway I realised that this was probably a dumb idea.  I was here in a strange city, wandering down a clearly unpleasant back alley, vaguely hoping I was going in the right direction; if I was raped and murdered here, even the Crimewatch reconstruction would say I was asking for it.  I proceeded anyway, with the blithe confidence of an idiot who has Google Maps and a bloody-minded refusal to backtrack. 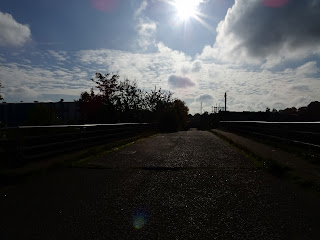 I pushed through a gateway that took me to a turning circle for the One Stop centre's delivery vehicles; a skip was full to overflowing, any hope of it ever being picked up abandoned.  There was a set of steps and I went down them and into a different world. 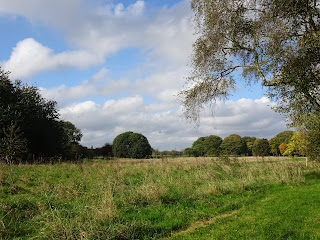 The mansion at Perry Hall existed for hundreds of years, passing from knight to knight, until in 1927 it was finally abandoned.  Birmingham City Council bought it and its lands and turned it into a public park for the benefit of its residents.  Now Perry Hall Park occupies a large swathe of the city, with grasslands, ornamental gardens, and sports pitches. 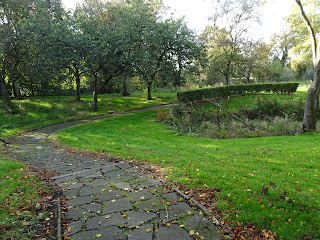 The shift was sudden and welcome.  Yes, I could still hear the constant drone of traffic in the distance, a grumble that never left, but now there were trees and grass.  I'd felt small by that flyover, intimidated and insignificant; I felt small here too, but in a different way.  Now I was overwhelmed by nature. 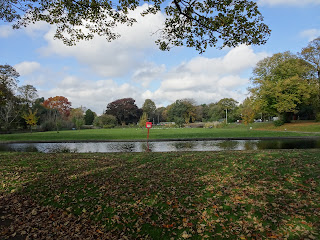 There's a green island in the park, surrounded by a curious channel with square corners; this is all that's left of Perry Hall mansion - the moat.  Where there used to be a stately home, there's now a very posh bird island, a flat expanse of lawn. 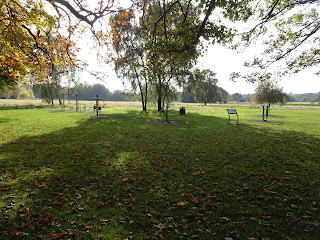 I crossed the River Tame and followed a high bank around the edge of the cricket pitches.  The grass acts as a flood defence, swallowing overflowing water before it reaches the city, but on a crisp October day it was nothing more than a quiet vista.  The more I travel in the West Midlands, the more these whipcrack changes of pace have become familiar.  In most other cities I've visited, a park like this would be feted and celebrated, and surrounded by beautiful streets.  In Birmingham I'm always finding sudden changes - incredible ugliness that snaps into picturesque views.  Old village centres surrounded by roaring motorways, blackened industrial estates next to dense woodlands.  Far more than Liverpool or Manchester, I'm never entirely sure what I'll find when I step off the train. 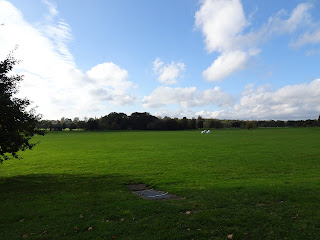 My path meandered through meadows, where dog walkers stood still and waited for their retrievers to retrieve, and then I was in a quieter corner of the park.  The path dropped low down to the level of the river so it could pass under the railway bridge; across the way, builders shouted obscenities at one another, which kind of ruined the pastoral mood.  Up again, and I was at the backs of houses, until I finally emerged on the Hamstead Hill. 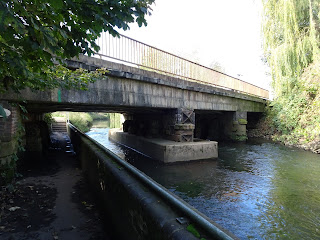 Yes, that's Hamstead, no p: this was very different to its London namesake.  While that is an enclave of prosperity, Hamstead no p is a former mining village swallowed up by the city.  There were no exclusive boutiques or elegant wine bars - instead I walked past Topps Tiles and the offices of a housing association, while the yellow sign of a Lidl caught the light in the distance.  The road rose up over the railway and I wandered to the Birmingham-bound platform. 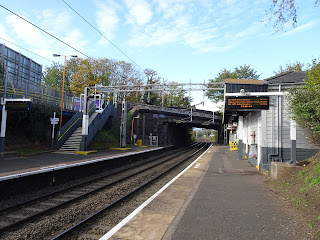 The ticket office was closed for refurbishment though, if I'm honest, I hadn't expected it to be open anyway; most of the ones I've encountered close at lunchtime and don't reopen until next morning. 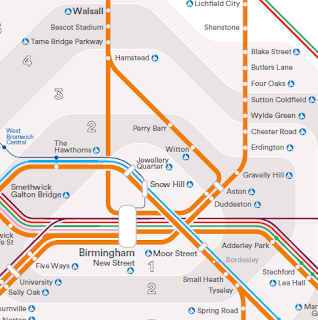 When I'd planned this day out, it was intended as a way of completing that loop above New Street.  I liked the idea of closing off that circle (well, more of a triangle) in one trip.  However, the map is slightly disingenuous.  There are fast and slow services on the loop, and the slow southbound services all go via Hamstead and Perry Barr; it wasn't possible to go direct from Hamstead to New Street on that left hand line.  (I would argue that you should move the station mark away from the branching point, in that case, and put it firmly on the Perry Barr line, but it is occasionally used by fast trains when engineering works close the Witton branch, so they're clearly hedging their bets). 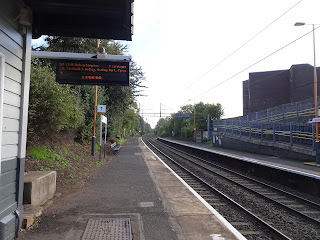 The west side of the loop will have to wait for when I visit Walsall.  In the meantime... it's good to be back. 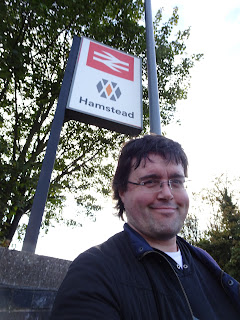 I had to go on that line all the way from New St to Rugeley last week. It is almost entirely horrible.

And Perry Barr is a particular low point. Not sure what sort of message we are sending out to the rest of the world, given that Perry Barr will be the nearest station to the stadium for the 2022 Commonwealth Games.

Honestly between this and TfWM changing the map after I criticised it I'm starting to worry I have too much power.