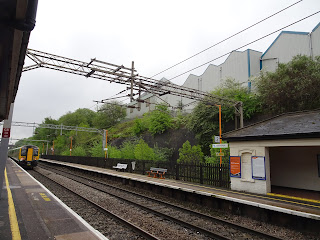 There seems to be an unofficial rule that the first station out of any major terminus should be a bit of a dump.  Edge Hill, one stop on from Lime Street, is historic but desolate: acres of rails and tarmac, unused, bare.  Ardwick, one stop on from Piccadilly, is a rusting staircase to a single platform, wedged between junkyards. 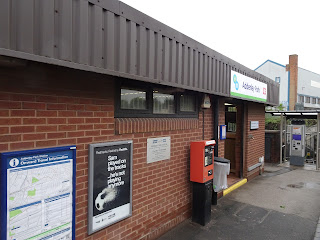 Adderley Park, one stop outside New Street, is low in a cutting between factories.  A brick staircase takes you up to the street, where the ticket office is a low Eighties structure built for security rather than passenger comfort.  Across the way, the Station Hotel pub rots slowly, abandoned, flaking.  It was a mean station. 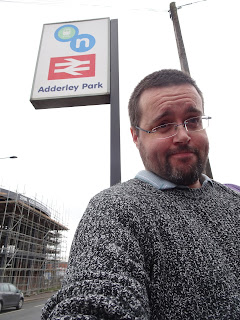 I wandered off in search of the next halt through long straight streets of Victorian terraces.  They were tightly packed with tiny yards out front - wheelie bin storage areas now - and bow windows covered in PVC.  On one street, a distinctive front door caught my eye.  It was black, with a curve of windows set in it, like a crescent; it stood out because it belonged on a modern apartment block rather than a hundred year old house.  What's more, the salesman must've cleared out his van on the street, because three other houses all had exactly the same door.  Hard to be unique when everyone copies you. 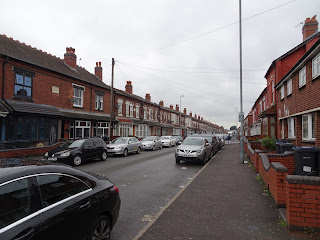 Soon I was on Alum Rock Road, a busy shopping street now entirely filled with Asian businesses.  I always like wandering into areas that have been occupied by a different culture.  I've seen so many British high streets that are basically the same, a pharmacy, a bakery, a newsagent, a hairdresser, a chippie.  The names change, the signs are different, but they're all of a type. 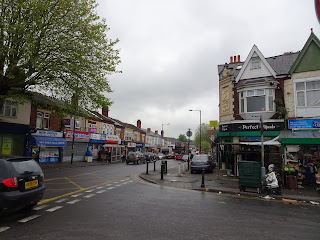 Here there were hijab and sari stores, swathes of exotic fabric shrouding shop dummies.  There were Asian confectioners, filled with unusual looking bricks of sweet stuff, still with the signs on the door saying "only three schoolchildren at any time" because some problems cross cultures.  The stores spilled out onto the pavement with boxes of fresh fruit and veg, and even the names for the most standard shops carried a tinge of exoticism - the Zam Zam Superstore is so much more exciting sounding than Morrison's. 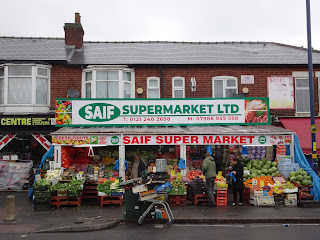 It was lunchtime during Ramadan, and I was impressed by the levels of activity around me.  My stomach was rumbling and I'd had toast and a yoghurt a few hours before; I'd been absent-mindedly popping mints into my mouth to try and hold down the hunger until I could stop for a rest.  There were men and women lugging boxes, shopping baskets, dealing with rowdy kids, and none of them could eat until sundown.  This is yet another reason why I am an atheist.  If I want a sandwich, I will get a sandwich, and I will let no religion get in my way. 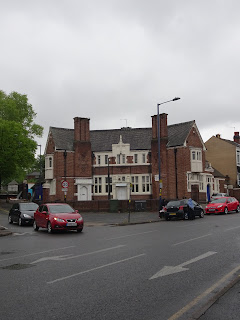 Of course the downside of an area filled with teetotal residents was the grand old pub at the head of the road was shuttered and converted into flats.  I climbed the hill, sweating in my overcoat - it had rained, slightly, earlier, so I'd slipped it on, but now it was dry again and it was too much hassle to push it back into my backpack - and turned off into an area of curved avenues and council houses beyond grass verges.  There was a ceramic toilet, dumped (no pun intended) behind a green BT box, and a banner hanging on some fences advertising the definitely not contravening any copyright laws "Burger Hut" with its "Double Flamey" burger (100% Halal!). 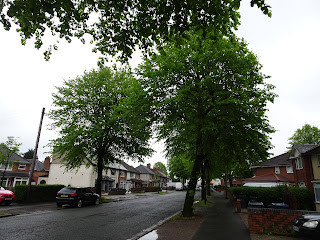 An ambulance sped by - the third I'd seen that morning; part of me vaguely wondered if there was some horrific accident somewhere I was completely missing - and I passed another entry in the canon of Incredible West Midlands Street Names: 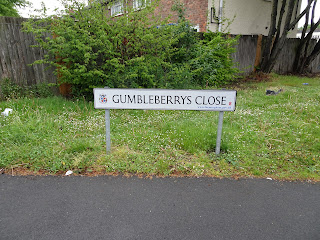 I had reached a mess of roadworks and chaos at the bottom of Cotterills Lane.  All I had to do was turn right to reach the station, but the whole junction was in disarray.  A busy main road narrowed to a single lane to cross the River Cole, and so the council were turning it into a dual carriageway.  It meant that pedestrians were sent on a lengthy diversion, that simple right taken away and replaced with a series of staggered pelican crossings.  By the fourth one I was thoroughly bored, and a little tense about the time for my next train.  The diversions were not friendly. 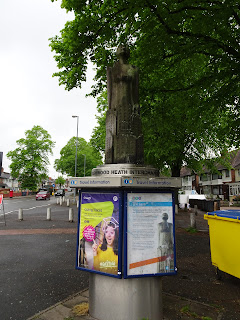 On the plus side it meant I encountered another Linkspot, the pieces of public art put up by Centro at public transport hubs.  This one was called Star Gazer, by Juginder Lamba, and was a carved piece of cedar atop a column for the "Washwood Heath Interchange" (a couple of bus stops either side of the road, but anyway).  The wet English weather had slicked it with moss and mould, and the trees overshadowed it slightly, but it was still good to see.  Another one to tick off. 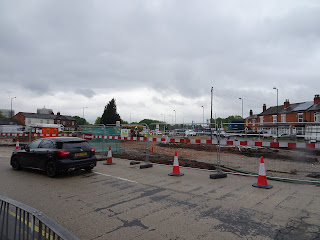 I crossed the river, where a woman politely lowered her brolly for me as she passed so that I didn't get poked in the eye - if only every other umbrella user was so considerate - and reached the roundabout on the other side.  It was another scene of chaos, and I was sent through more pelican crossings to a retail park I didn't really want to visit, especially since the McDonalds was pumping out the scent of fried food and grease and making me even hungrier.  I edged round it to Station Road and hurled myself across the traffic at a spot marked with an out of order crossing. 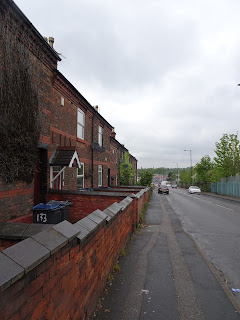 Another climb, past railway cottages, took me to the bridge over the tracks and Stetchford station.  I'd not needed to panic about missing my connection - it turned out to be closer than I thought - so I took my time. 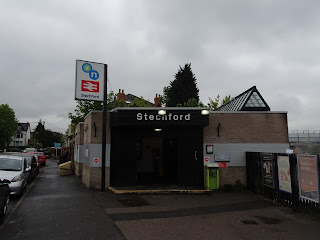 In a bid to make the building look a little less bunker-like, the outside wall had been decorated with an art project, "Faces of Stechford".  Photographer Ian Davies had worked with a scout group and taken pictures of locals to adorn the exterior. 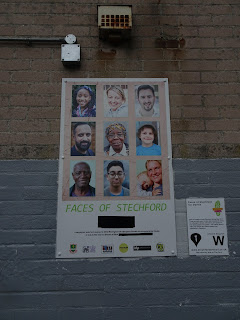 Admirable stuff, sadly marred by overenthusiastic employees of West Midlands Railway erasing any sign that the previous franchise holders ever existed.  Black rectangles obscured any mention of London Midland, like a Stalin-era re-education project, marring the friendly look of the posters and coming off as petty.  Instead of me seeing the people, I saw the black bars, and that's not the message they were trying to convey. 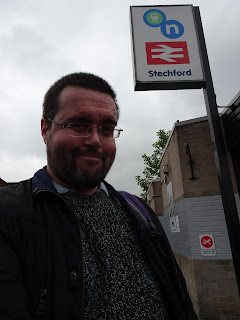 Stechford station was undergoing work to become step-free - handy when the only way to the platforms was via lengths of concrete stairs.  I crossed over to the island and waited for the train between a girl loudly discussing her Netflix viewing - "I mean there's so much of it that's just shit, but there's some good stuff, and I just, like, watch it all in one go, like" - and a group of boys hanging around the single bench.  It was a three-seater, and the ones sitting down were either black or Asian; the boy left standing was white but talked louder and more excitedly than any of them.  When they got up to board the train, he went to a different door, and they called after him: "Milky!  Over here!"  Which made me giggle all the way to Lea Hall. 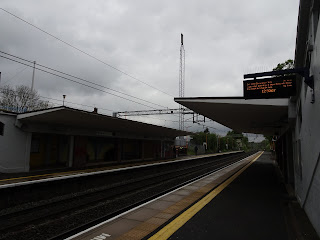 I was immediately taken with it.  The station opened in 1939 and was built in a striking Streamline Moderne style, with white concrete and elegant lines.  I was less keen on the platform shelter interiors. 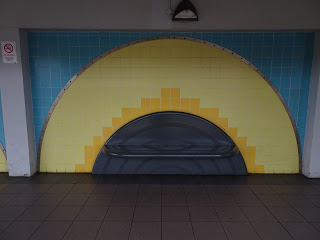 The station had been refurbished and while I understand wanting to stick some colour in there, that's just garish.  I climbed the orange tiled stairs to street level where, disappointingly, there wasn't an understated 1930s ticket office straight out of Poirot, but instead there was a load of 1980s red brick.  The sole concession to its age was an old iron clock tucked in the corner and which, of course, was showing the wrong time. 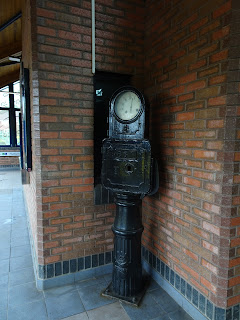 I left the station through an over-elaborate entrance.  Designed by Tim Tolkien, a grand-nephew of JRR, it seems to be symbolic of the universe, with stars and planets and orbits.  To me it looked like a bit of playground equipment that had got lost. 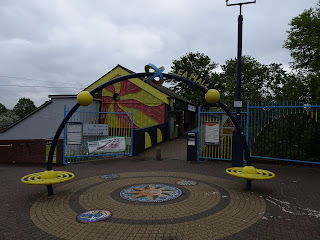 I wedged myself in against the boundary fence to take the sign pic, ignoring the bemused stare of a taxi driver opposite. 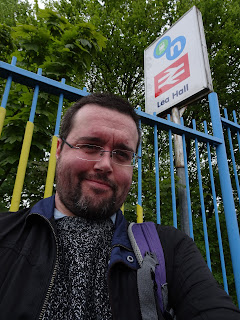 I passed the sad bulk of the Meadway Social Club, still encouraging you to watch the Carnival of Football of the 2014 World Cup, and another McDonalds (begone foul temptress!) and onto a long wide dual avenue.  Stout corporation houses were placed off to the side, separated from the traffic in a considerate manner you'd never get away with these days. 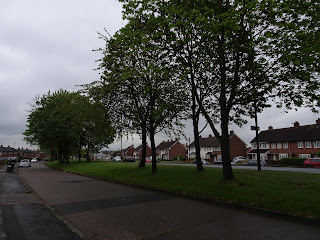 I followed the road to a hefty junction overseen by a reassuringly solid factory building.  On closer inspection I realised the factory was gone, the office block was now subdivided, and it was now the home of BJ's Bingo Hall. 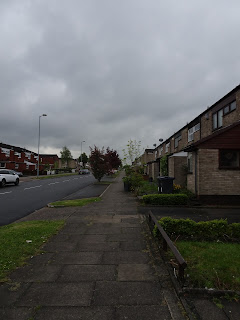 There was more council housing but this was far more modern, built with its back to the road and accessed via walkways.  It was done with the best of intentions - a way to segregate pedestrians from traffic - but it instead creates what my mum always used to call a "mugger's paradise"; dead ends, dark corners, empty spaces with nobody overlooking.  Above me I saw the bellies of 737s cruising low, leaving the runway of the airport and roaring over the houses.  There was a tear of engines and then a strange, almost funereal silence until the next one. 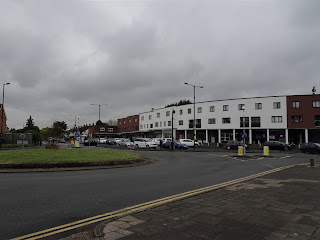 At the bottom of the hill a wide new development of shops marked the shift in social standing again.  I'd travelled from the inner city to the council hinterlands and now I was entering suburbia.  The houses were larger, semis, set back from the road and with trees outside.  Bits of countryside broke through, revealing green fields and scenic walks along brooks. 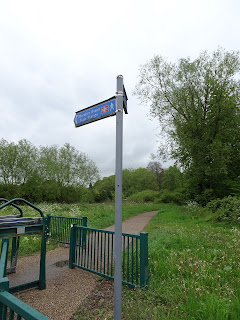 The border from Birmingham to Solihull was marked by a sign and a house with four cars on the drive.  I don't think it was a taxi firm.  Soon I'd found Marston Green station, and I nipped into the corner shop there to get a bottle of water and - finally - a sandwich.  I waited politely in the queue while the two women behind the counter tried to give directions to a delivery man in some of the thickest Brummie accents I have ever heard.  It was like being beaten over the head by the Bull Ring.  They finally noticed me, waiting, fuming, and served me, but it was too late: my train was already approaching the far platform. 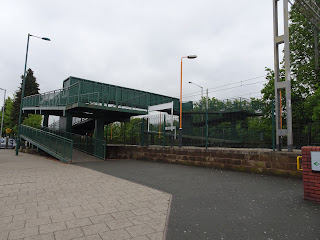 I negotiated the many ramps to take me across (only noticing on my way back down that there was a version with steps that would've been much quicker) and took a seat in the shelter. 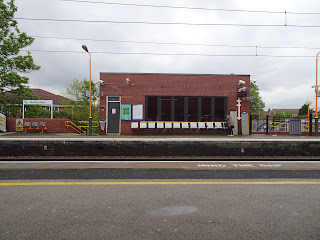 I'd thought about going on - to Birmingham International, the next stop on the line - but that seemed like a big job.  Birmingham International has an airport, and the NEC, and a cable hauled railway built on top of a maglev system; that was a stop that deserved thorough investigation, and I wasn't in the mood.  Instead I broke open my sandwich and tucked in. 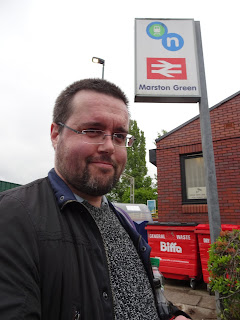 Possibly I have a diseased mind

The Solihull accent is one of the thickest in the West Midlands.

Good to see you back on the rails!

The closed pub looks a very typical outer-Brum roadhouse; probably Mitchells and Butlers back in the day.

If only all franchises did everything as well and as quickly as they eradicate any hint of the predecessors in signage and livery....

LOL at "a bit of playground equipment that had got lost".

'Milky' probably has grounds to sue, but hopefully won't.