Back in January, when I started up this nonsense all over again, I wrote a brief rundown of the West Midlands Railway map.  In passing, I casually noted it was:

It seems I have more pull with West Midlands Railway than I suspected, as they almost immediately updated the map.  And changed it. 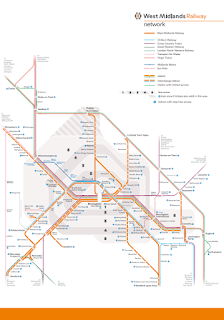 You can see the full PDF version here.

It's a pretty radical makeover.  The main colour scheme is now orange, instead of purple, but the basic form of the map has also changed.  New Street remains at the centre but the orange lines have been stretched and splayed: Shrewsbury and Hereford are now at the end of long diagonals, instead of verticals.  It makes the map more dynamic and creates a kind of "X" with Birmingham New Street at its centre.  That station also increases in importance and impact in the redraw. 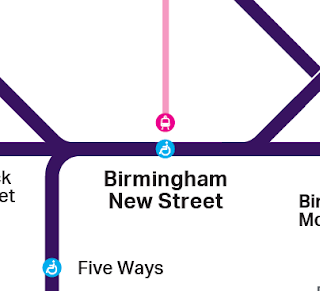 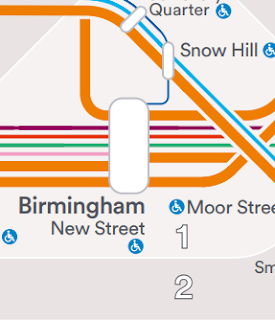 Each line is now kept separate, meaning there are three orange routes through New Street, plus a whole load of others (which we'll get to).  New Street becomes an expanded lozenge in a look that's very reminiscent of German S-Bahn systems.  It reflects the importance and complexity of the station and provides a bullseye.  If anything, they could've made it even more important - a thicker line round the lozenge, for example, to really draw the eye.

As to those other colours, the new map now contains indicative lines for all the other railway companies that pass through the region. 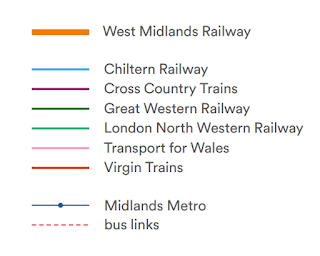 Again, this is a handy way of showing the interconnectivity of the West Midlands.  There are a whole load of other routes threading through which can provide alternative travel arrangements.  It means that stations that previously looked comparable in size and service on the old map. like, to pick two at random, Walsall and Birmingham International:

Become very different in importance on the new map:

A handy wayfinding tool and no doubt due to responsibility for the region's railways passing to a local government body.  This isn't about advertising one train company's services; this is about getting you around the region as effectively as possible.  It also means fare zones make an appearance though they're so faint as to be almost useless: 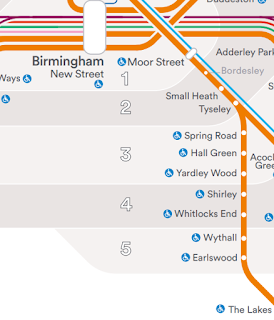 It has the effect of clearing up some of the more confusing corners of the old map, such as the triangle around Lapworth/Hatton/Cleverley.  On the old map it looked like this: 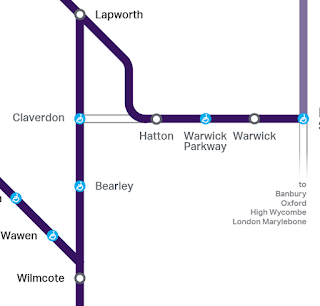 That straight line terminating at Claverdon implies a shuttle, or a single route from there to Leamington Spa.  The new map clarifies the exact services involved, and does it with pleasing curves rather than the awkward purple dog leg: 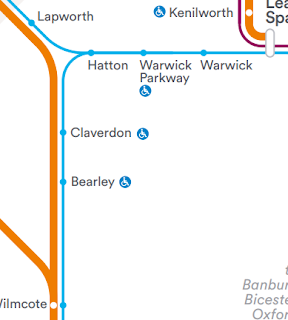 This spirit of interoperability means the Midland Metro makes an enhanced appearance on the map.  Previously it was a pink line with stops only where it had a rail interchange - New Street, Snow Hill, Jewellery Quarter, The Hawthorns and Wolverhampton.  Tiny text urged you to Check local publicity for tram details.  Now we've got actual tram stops: 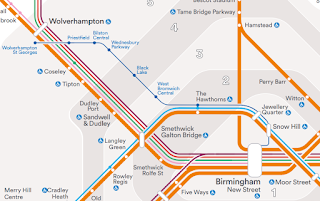 ...but only 10 tram stops; 16 are left off the map.  Obviously cramming all those stops into that little gap would be difficult, but this seems like a weird compromise, a bit "will this do?"  Also, and I know this is my problem and not theirs, but the stop for Snow Hill is actually called Bull Street and the stop by New Street is called (sigh) Grand Central.  That's not on the map.

On the whole, the new map works well for me, with only a few minor quibbles - some of the kinks are inelegant, like the tram from Snow Hill to New Street bending back on itself above, or the flaccid spur to Stourbridge Town:

Also, I'm not 100% certain this lozenge at Smethwick Galton Bridge includes the green London North Western line when the services definitely stop there.  That might just be my eyes. 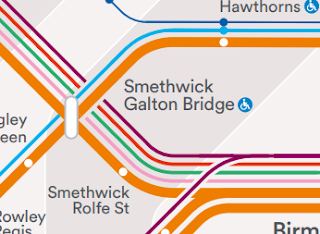 And I'm happy to report that Kenilworth is definitely there and is open.

From a purely selfish perspective, the amended map gives me a new total number of stations to visit and collect.  There are those extra six tram stops, for a start; I was previously in two minds about doing the Metro, but this has sort of forced my hand.  Elsewhere, the designers have allowed lines to spiral off the edge of the map, raising newer and lengthier journeys: 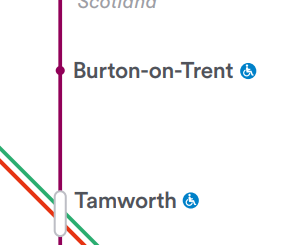 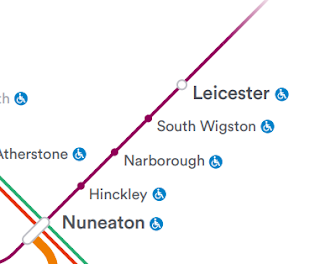 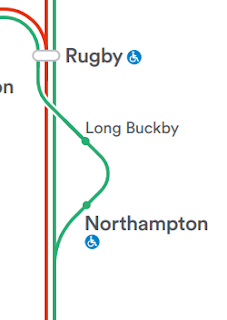 Worst of all, they've added Bridgnorth: a service accessed only by the Severn Valley Steam Railway.  Regular readers (hello you!) will be aware that I really don't like preserved railways and find them overpriced and boring.  And now I've got to go to one.

On the plus side, the new map removes one of my awkward moments.  In my original post in January, I absolutely refused to revisit Wedgewood, Barlaston and Norton Bridge, on the basis that


I have to admit this decision always bothered me, even though the map itself was barely interested in them: 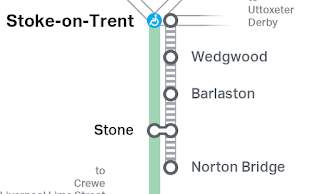 Well, the new map has taken the decision out of my hands, because those three stations have been completely wiped away. 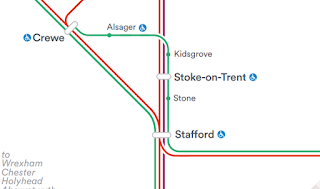 By my reckoning, there are 15 extra stations on the map, plus 6 more tram stops.  I suppose it gets me out the house, doesn't it?

So will you be visiting every station on the map, or just the ones served by West Midlands Railway?

Stourbridge should feel blessed that it earns this week's smutty comment.

Yes, it's the whole map, not just West Midlands Railway. I'm a completist!

I agree that the new map is a huge improvement but it is still irritatingly imperfect. For example. the map seems to suggest there are direct trains between stations to Worcester from stations like Selly Oak and Bournville.

The addition of the line between Hereford and Shrewsbury should be lots of fun with some great scenery and lovely small towns to explore.

Ah ok, that's fair enough, you can't really say you've see the West Midlands without visiting places like Tamworth, Rugby or Warwick, and you'll also get to experience the delights of fairly obscure places like Atherstone and Long Buckby.

Bridgnorth itself is rather nice, and has a cute little funicular railway. And you can get there by bus from Wolves. i'm just sayin'.

The Severn Valley Railway is not that bad... and there are plans to run West Midlands Trains to a new station at West Midlands Safari Park, along SVR rails.

Plus at the other end you have The Bridgnorth Cliff Railway