Ladies and gentlemen.  Let me introduce the newest member of the Northern Rail family. 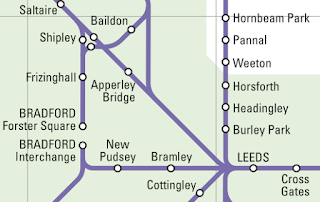 Yes, they've updated the Northern Rail map, and yes, Apperley Bridge has finally made its debut.  I didn't think they'd bother, to be honest, but it's nice to see it has arrived.  I would've thought they'd have added Kirkstall Forge next door to save having to update the map later - perhaps with an asterisked Opening Spring 2016 - but apparently not.  (What's taking them so long, by the way?  I mean, once you've stuck a couple of platforms down, surely the station is open - the waiting rooms and car park and all the rest are just gravy you can finish later.)

Incidentally, in 2014 I had a stab at what I thought the new bit of map would look like.  Unfortunately I worked on the assumption that all the trains on that stretch of line would stop at the new stations, but otherwise, not bad. 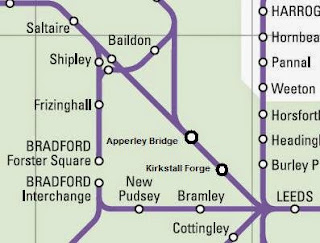 So I've updated my spreadsheet.  There are now 534 stations on the Northern Rail map, leaving me with 10 to collect (the 15 I had on January 1st, minus Woodlesford, Outwood, Clitheroe, Whalley, Langho and Rampsgreave & Wilpshire, but plus Apperley Bridge).  And no, I won't tell you which ones they are.

P.S.  There's one other tiny change - the Todmorden Curve is now on the map.  However, I think that might have been there a while and I just forgot to mention it. 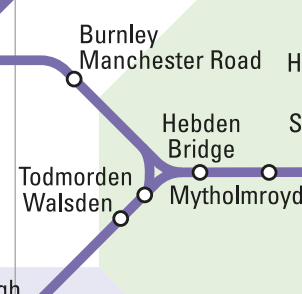 I think I can identify at least 6 of your missing stations... there is a strong urge in me to scour the map to work out the other 4!

Obviously I am staying anonymous.

If you've got the map, the inclination, and don't mind hours of mind numbing tedium, go for it! (But please don't spoil it on here. I like to maintain a fragile air of mystery).