The Shock of the New

The last time I visited Wakefield, the blog post was titled The Worst Railway Station In Britain.  I didn't think Wakefield Kirkgate was that bad - the title came from a Network Rail report.  But the station had a definite air of dereliction and despair.  It had been abandoned and neglected. 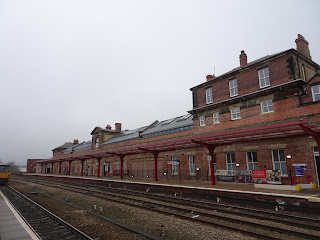 A huge amount of time, money and effort have been thrown at Kirkgate, and the result is a real transformation.  Kirkgate's proud station building has been restored to something resembling its former glory.  Bare walls have been scrubbed; canopies have been installed where there were previously nothing. 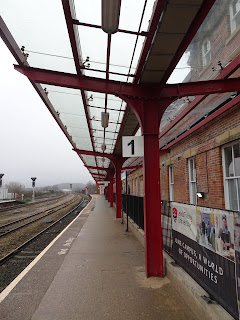 On the island platform, stranded between lines, they've made the station look respectable.  When I visited in 2012, these windows weren't filled with glass - they were filled with corrugated plastic: 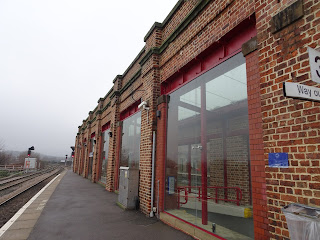 They've also built a proper cover for the underpass. 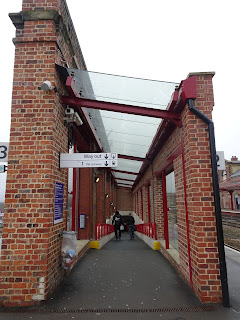 In the main building, new commercial spaces have been carved out; there's a cafe inside, and a taxi rank outside.  There's grass and landscaping, and new artworks.  What had been a dead hulk has been given new life.


The transformation's not as amazing as the one at Wakefield Westgate, though to be fair, they didn't do a restoration job there: they just demolished the old 1960s station and built a new one.  I'd walked there from Kirkgate and had the usual rush of memories from the last time I was in the town centre - it was all very familiar.  Then I turned a corner and entered a whole different place. 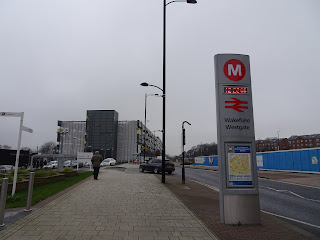 A huge area of land has been obliterated and colonised by hulks; big metallic shapes dropped randomly across the landscape by a deranged giant.  It's like nothing else in Wakefield, a second division city in West Yorkshire.  It's a bit of big league construction, and I don't feel like it fits. 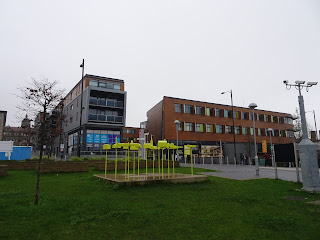 The station, on the other hand, is a triumph.  I'd complained last time that the old building was tired and grubby.  Times have changed.


No, it's not innovative or avant-garde, but it is clean and practical.  The interior is even better, changed from a narrow corridor with a flurry of facilities into a wide open space. 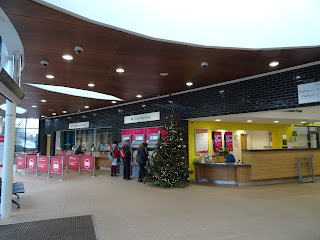 They've made room for more retail, of course, but it's been well-inserted.  I was pleased to see familiar, trusted brands, too, rather than the usual overpriced railway station nonsense.  A Subway sandwich beats an Upper Crust baguette any day. 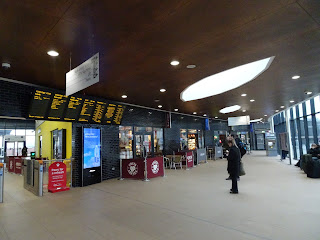 The tilework is carried over onto the platforms; clean, practical, hard-wearing.  Wakefield's two stations have gone from being an embarrassment to an example for the rest of the country. 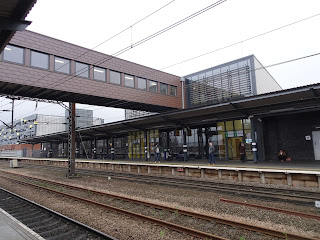 The third part of my West Yorkshire Regeneration Tour was a return to Leeds station.  I've always liked Leeds; it's bright and airy and works as a busy transport hub.  It's well laid out and uncluttered.  What lets it down is its interaction with the city.  The main exit is onto a busy bus lane, with narrow pavements and steps to get you into the centre.  Worse, it was lopsided, with an exit only to the north  - if you wanted to get to the south of the city you had to walk all the way round the station, and, as one of the biggest stations outside London, that's a bit of a walk.

The disappointing front entrance is still a work in progress, but they've finally solved the problem of the southern exit. 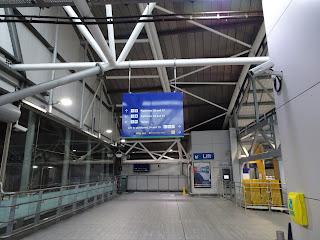 It's taken them decades to right this wrong because of Leeds station's geography.  The River Aire shadows the station, with a canalised branch running right under the tracks.  A southern exit would have to overcome the geography.  The architect's solution is a kind of pod, welded onto the back of the station and hovering right over the water. 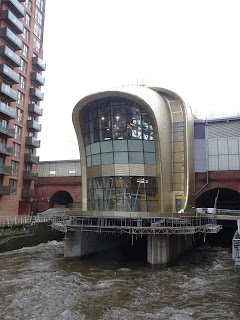 I'm not sure about the gold - it's a bit gaudy for my tastes - but it certainly makes the entrance stand out.  There are bridges across the water to take you to the new, slightly bland regeneration areas behind the station. 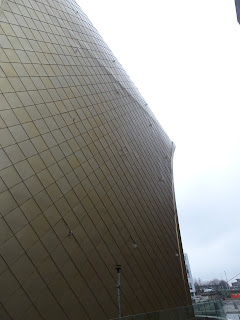 There's also an exit into the space beneath the arches, a space that's refusing to go trendy.  It's dark and wet and a little intimidating, though I should imagine the new station exit will change that.  Soon it'll be filled with artisan coffee stalls and trucks selling Mexican street food.  For now, it's the location for a horrible murder in a Silent Witness. 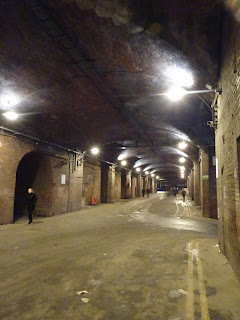 I did a bit of a tour of the regeneration area behind the station.  It feels underfed and empty, though as a district of restaurants and bars, a Tuesday afternoon probably isn't its prime.  The best part is the canal basin, pretty and historic. 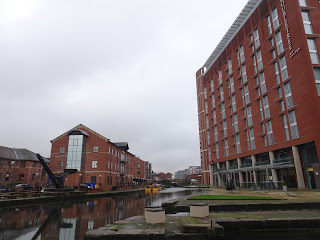 Inside the pod it's bright and airy.  I'm not sure about the yellow - that will date very quickly - but I love the brick of the undercroft, exposed and cleaned. 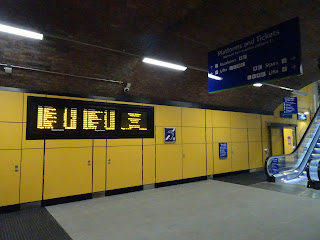 The ride up to the main concourse is the best part of the whole station.  Light streams in through the glass, though the lower windows have been frosted to stop tourists from standing there to admire the view and blocking the way for commuters. 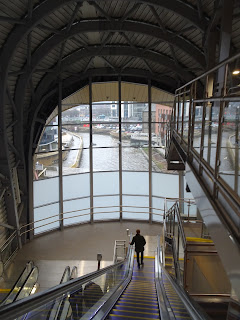 Above you is a stunningly engineered curved roof.  I was pleased I wasn't the only one taking pictures. 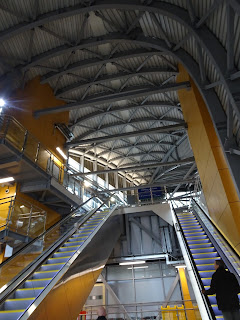 It's another wonderful facet to an already wonderful station.  Can you sort out that main entrance, now? 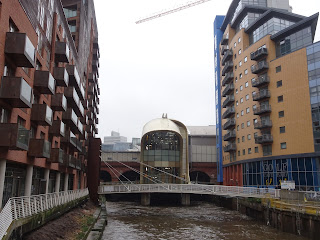 As a native of Wakefield I can tell you that all the new buildings around the station do not fit in at all. Most of them are still empty with only really the council moving in. All that has been done is kill off the area at the top of Wood Street which is mostly now empty.
On the upside at least we now have two decent stations.

As Wakefield's most famous son put it...

Bridges and rivers
And buildings pulled down
Time spent in places my footsteps had found
Mirrors in ballrooms lie smashed on the ground,
Walking with November mists...

Pathways and windows
And movies in May
Quiet old ladies who soon pass away
Paintings and songs that I'd done in a day...
Going round in my head...

Fires on spires and chimneys of black
Fields on horizons with pylons that crack
With singing sad wires of council house mystics
To apply their statistics
And read the tea leaves,
Time knows no limits for days such as these

The Kirkgate transformation has won a Heritage award. See: