Riding Through The Glen

How do you wash the taste of sexism and grease out of your mouth?  RAIL RELATED ANTICS OF COURSE! 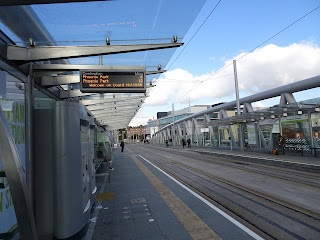 Nottingham really shouldn't have trams.  I mean, Liverpool hasn't got them.  Nor has Glasgow, Cardiff, Belfast, Newcastle.  Even London's only got a few, squirreled away in Croydon.  There are bigger, more important cities that should be higher on the list.

It has a network thanks to two reasons.  Firstly, good timing: it managed to have its plans ready to go for that very brief period of time when the Labour government loved trams, in the late nineties.  Secondly, it had a council who was absolutely committed to the scheme and willing to push it through.  Nottingham's city and county councils were totally on board with the tram concept, unlike say, in Liverpool, where boroughs who wouldn't benefit from Merseytram were able to vote down the idea.  (Damn you, Wirral).

The result was an instantly successful network, the Nottingham Express Transit or NET.  It was so successful, plans for extensions were quickly approved, and two new routes to the south of the city opened this year. 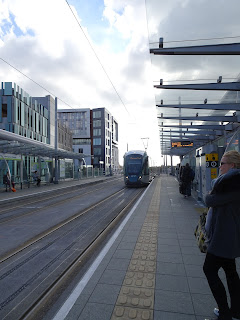 Everything about the system oozes class and style.  You buy a ticket before boarding - no Supertram-style conductors here - then board a swift, silent tram that glides through the city centre. 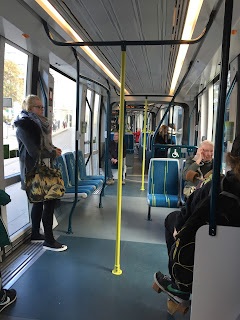 I rode out to David Lane, to the north of the city centre, where it splits into two branches, then turned round and went back into the city again. 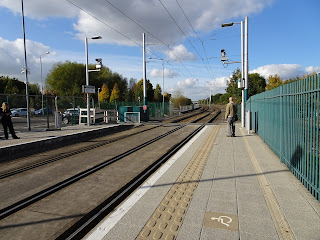 And I haven't even mentioned the new tram vehicles, which are sexy as hell.  There are older ones, slightly boxy like the trams in Manchester, but the new Nottingham trams look like science fiction vehicles.  Pointed fronts with a centrally positioned driver, like a lost Thunderbird.  Even that deep green colour is damnably attractive. 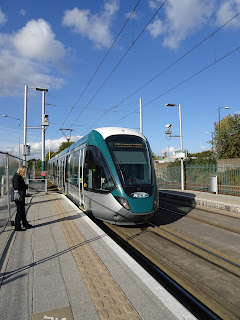 I returned to the city centre and found, perhaps, the ideal English town.  It was big, but not overwhelming.  Busy but not a crush.  There were extravagant moments of civic pride, like the Old Market Square, a European-style open plaza surrounded by shops with the elaborate Council House at one end. 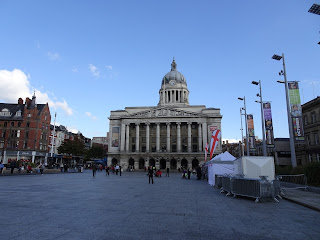 The streets around it mixed new build with heritage, plus the occasional moment of local colour, like the statue of Brian Clough. 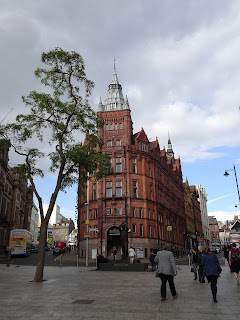 It was what you wanted from a town centre.  There were restaurant quarters and high-class districts, a big ugly mall (the Victoria Centre - she would not be amused), a beautiful theatre. 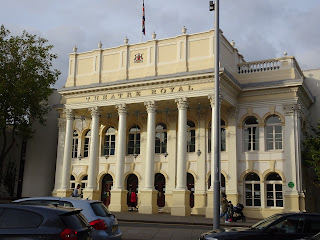 And, of course, there's Robin Hood.  Anyone who thinks that Liverpool harps on about the Beatles too much should travel to Nottingham and see their obsession; even a local utilities company, handing out flyers in the Old Market Square, was called Robin Hood Energy.  At least John, Paul, George and Ringo were real. 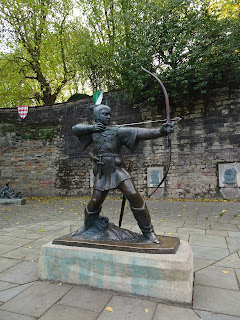 I crossed over Maid Marian Way - an unlovely dual carriageway that slices through the city centre; they make the typical English mistakes as well - and walked up to the Castle. 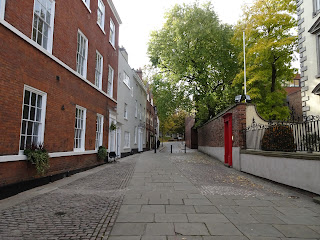 Regular readers will know I am extremely cheap, and so there was no way I was going to pay to take a look round the Castle, not least because it was nearly five o'clock.  They also appeared to be setting up for some kind of event; I strongly suspect that was Robin Hood related as well. 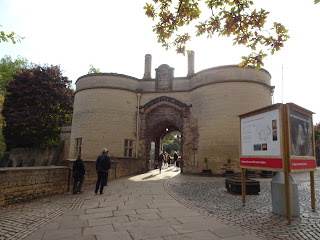 I crossed back by some wonderfully 1960s buildings, passing a cat cafe - yes, the type that lets you pet a kitten while you have a coffee, and no, I didn't go in; I'm a dog person - and did another circuit. 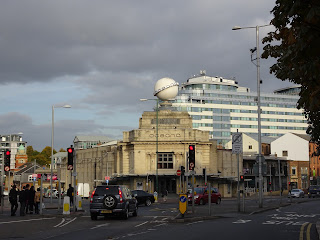 Nottingham didn't cause palpitations like Newcastle or Sheffield do; it was rather more small scale.  I felt like I'd seen most of its charms.   This is not to denigrate it in any way; what I saw mostly lovely.  I decided to have a pint and a sit down, and settled on the Lord Roberts, a theatre themed gay pub.  Posters of West End productions adorned its walls. 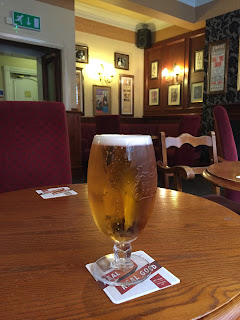 It was charming, quiet, interesting.  It was Nottingham.
Posted by Scott Willison at 14:02

You're a fucking liar, that's what you are. You have mentioned on this very blog, several times I believe, how much you dislike dogs, walking dogs, little bags of poo you have to carry while walking dogs, shouting after dogs and all the general things that go with liking dogs.

You are *so* not a dog person.

I am a dog person. Dogs are great. They're so much more fun. I don't like them enough to handle their shit.

Also, what about all the complaining you did about Nottingham being on the 'Northern' map and you having to spend 3 hours hauling your ass over there to bag the station?? Now, you've gone back to look at trams!

I rather suspect he did the trams while he was there rather than going all the way back!