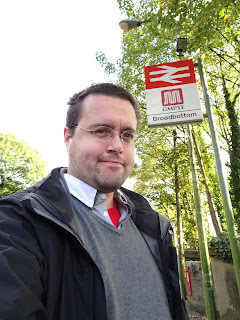 Oh, how I laughed. 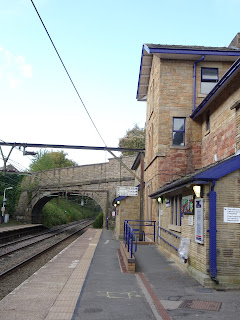 Yes, I am a fully grown adult, but really, how can you not laugh at that name?  It's not just the word bottom, rude word of choice for six year olds across the nation, but it's also the fact that it's coupled with a perfectly descriptive word as well.  "That Mrs Pensbury has a right broad bottom". 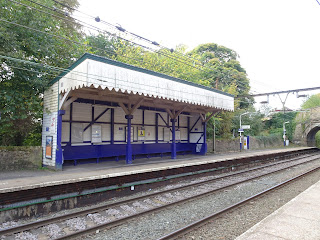 It does have a lovely station though, well taken care of, buried in amongst the trees on the edge of a valley.  I walked off the platform through a staffed ticket office, past an informal passenger library, and up the steps to the street.  There was a chain of stone homes threaded down the hill, and a war memorial continued Broadbottom's commitment to low-level fnars with two Sidebottoms, a Higginbottom, a Slack, and two Titteringtons. 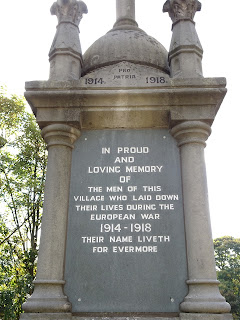 The road sloped downwards, severely, the kind of gradient that probably makes it incredibly popular with children on snow days, and then kinked back under the railway.  While the road followed the contours of the hill the trains flew above us on a viaduct, its arches acting as frames for perfect countryside views. 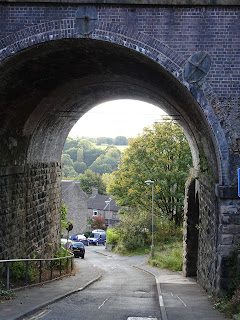 Broadbottom village - still funny, sorry - had all the local amenities you could hope for: post office, Chinese restaurant, pub.  At the local sandwich bar, a dummy had been propped up in one of the garden chairs outside, smiling vacantly at me as I passed.  The road carried on down, plunging to the level of the river Etherow, which loops around the village. 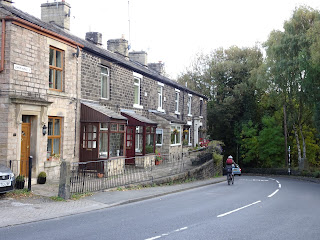 When I'd left the train a few minutes before, I'd been on the level.  I'd had to walk up to reach the road, in fact.  Now the railway soared. 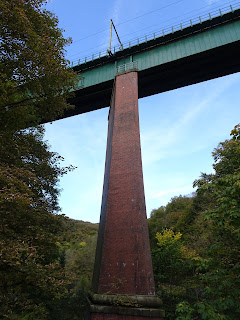 I turned up a side road and passed under the huge viaduct, bricks and ironwork flying above my head.  There were the noisy cascades of the river and, more surprisingly, a house, tucked underneath at the waters' edge.  I followed the gravelled road round, hugging the curves of the river beneath flickering autumn colours. 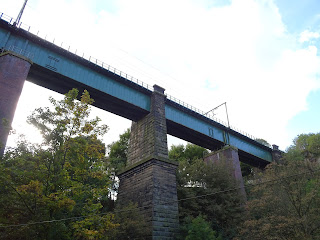 I was accompanied by a crane.  I disturbed him once, turning the corner as he stood on the rocks of a waterfall, and for the next ten minutes or so I shadowed him upriver.  Every time he flew on to a new fishing spot, I followed, making him flap off to find another one.  It wasn't deliberate - we just happened to be going the same way - but still, I guessed he wouldn't be happy when he got home to the nest that evening. 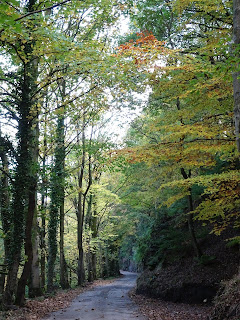 The trees fell back as I reached the end of the road.  There was a home here, the old mill, and a series of rough outbuildings.  Hefty signs warned me that it was private property, a soon to arrive luxury development and the public footpath was that way so move on plebs, but they still had a fair way to go before the BMW owners came in and ruined what was, at present, a lovely spot. 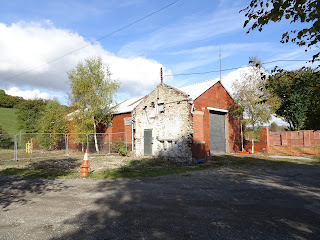 The path, narrow and fringed with nettles, curved round the edge of the millpond then began a further advance over the hill.  At first there were more trees either side, then they gave way to a long view over Derbyshire. 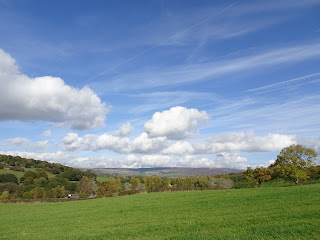 Down here, in the tamed parts of the landscape, Autumn was still gently stroking us.  The trees were fifty percent green, fifty percent yellows and reds; the weather still clear and bright.  In the distance I could see the future on the exposed moors, the dark dead scrub and lifelessness of winter.

My legs wet with dew, I followed the path round a paddock, then mounted a stile and came out on a busy road.  I wasn't in the mood for choking in exhaust fumes, so at the first sign of a public footpath, I swung off the main road and somehow found myself in suburbia. 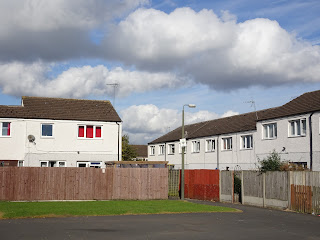 Broadbottom is, politically, part of Greater Manchester; it's in the borough of Tameside, though there's little there to indicate that you're part of a great metropolis.  Gamesley, on the other hand, is within the county of Derbyshire, but it was as Manchester as Liam Gallagher playing the theme from Coronation Street in a flat cap.  This was an overspill village, built in the late sixties to house exiled slum dwellers, and they'd built a tiny piece of inner-city Manchester on the edge of the High Peaks. 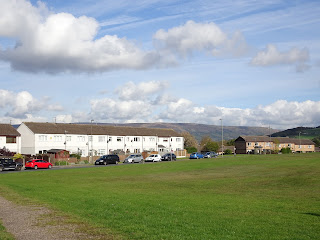 The houses don't belong here.  I'd become used to honeyed stone and chimney pots, not the stark blank faces of Corporation homes.  A main road loops round the estate - I suppose, technically, it's a village, as a residential district in the countryside, but let's be honest, that's an estate - and the middle of the loop is filled with tiny cul-de-sacs.  There was a handy map for the benefit of visitors, but that only managed to confuse me more.  Too many obscure street names in too close a space; the postman must hate it. 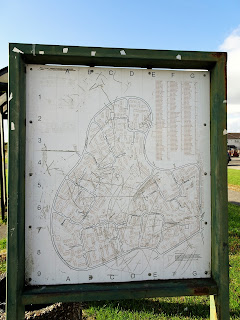 I didn't want a fake village here, a Disney-style theme park world of roses over the door and medieval churches built out of fibreglass for appearance's sake.  I wanted respect.  There had been a community at Gamesley for centuries, and this estate didn't care about them.  It had been transported wholesale from the city without any care for its surroundings.  Perhaps it was a ploy to make the displaced locals feel at home, in which case, well done. 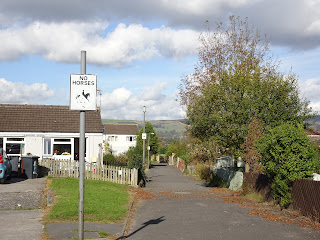 I left Gamesley and headed back onto the main road.  There were older houses here, the original parts of the village, and a wreck of a Sixties pub that was somehow still trading.  An playground butted up against the Pennine Bridleway, and a combination horse/human crossing had been provided for the road. 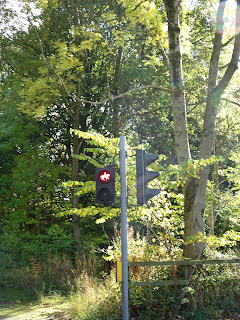 In line with pelican, zebra and toucan crossings, this is known as a pegasus crossing.  I like to imagine there's a room in a building at Whitehall where civil servants are tasked with nothing except coming up with appealing names for bland pieces of street furniture.  This is not a complaint, by the way; that's the kind of thing I want my taxes spent on.  Though personally I'd have called it a centaur crossing, because it's half human, half horse.  Oh, please yourselves.

I had ten minutes until my train from Dinting, which seemed simple enough - Google Maps told me it was just a couple of roads away - until I reached the A57 and looked up. 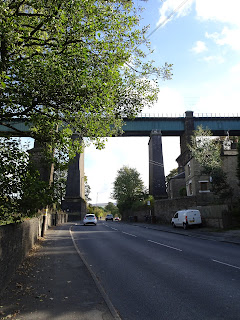 Apparently the station was somewhere up there, and I had to find a way to get up there.  As if to demonstrate that time was short for my connection, a train passed over the viaduct.  Trains can't technically saunter, but this one seemed awfully smug. 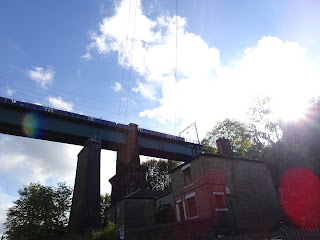 Cursing the engineers who decided the efficiency of the railway was more important than my calf muscles, I began to power walk up a steep footpath towards the station.  Halfway up I was rasping for breath, my lungs complaining that the previously gentle stroll had been turned into some kind of Olympic event; when a female dog walker appeared on the path ahead of me I hung back, so she didn't think I was a heavy breathing sex pervert stalking her.

Dinting station appeared to my right, and I relaxed a little.  There didn't seem to be a way onto the platform, but there was a road bridge and a sign. 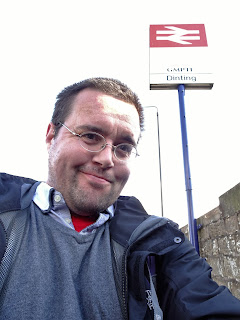 I was surprised to see my train leaving as I rounded the corner.  I checked my watch and, yes, I was on time; I still had a couple of minutes to spare.  The driver had decided to leave early and I could only watch, impotently, as it cruised off towards Glossop. 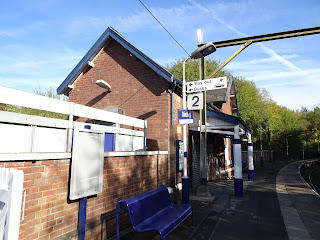 Dinting, at least, was a bit more interesting than your everyday station, a triangle of lines that form a junction between the Glossop and Hadfield routes.  Trains pass through Dinting, off to Glossop, then to Hadfield, then back to Dinting again in a loop; I was able to watch the train that had abandoned me pass by on its way back to Manchester. 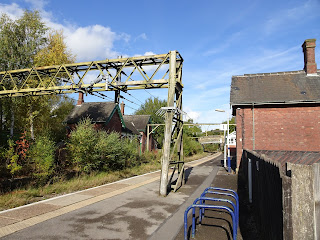 It was only a half-hour's wait, I know, and there were seats and sunshine, but I was still annoyed that my train had forgotten about me.  I plonked myself down and mentally began drafting a snotty letter to Northern Rail.  I wouldn't send it, of course - if I ever become the kind of person who sends snotty letters to service providers I'll have become, well, the BF - but it was still good to get it out my system. 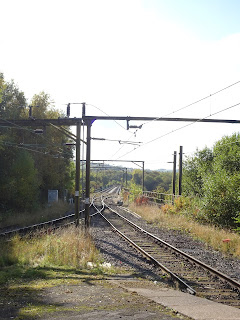 Heron, not crane. The only cranes in England are in Somerset. And on building sites, obviously. Gamesley is indeed awful, but it does have an actual Roman fort, Melandra. Although frankly it's not worth seeing.

This is why I have never been mistaken for Bill Oddie.

Used to be a pub in Broadbottom station's buildings. Shame its long gone.

PS. it's not amusing in any way.

Disagree. Broadbottom is extremely amusing in a minion-sniggering kind of way. How many more stations do you have to do? Can you post an update?

Broadbottom is and always will be very amusing.

Still a fair few to do, though Network Rail is currently conspiring to stop me doing all of them...

Merseyrail did that to me couple of weeks ago; wanted to do Helsby to Birkenhead, and the whole damn line was shut! Buxton up to Stockport and down to Macc tomorrow