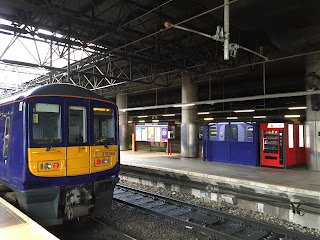 For years, this has been the typical view of Manchester Victoria.  Dark, dank, miserable.  In the early 1990s a cash-strapped British Rail flogged the air rights over the top of platforms 3-7, and now the Manchester Arena squats over the top.  It blocks out all the light, it makes the ceilings too low, it highlights the mess of electrical equipment over the tracks.  It's not good.

Until very recently, the other side of the station was just as inadequate.  A leaky roof.  Crash barriers to try and manipulate the crowds.  Compared with the glistening station-slash-shopping mall over at Piccadilly, this was very much bottom league.

A bubble has descended on Victoria, a giant plastic bubble made of steel and air.  Constructed out of the same materials as the Eden Project, the new roof floods the station with light.  What was dark and miserable is now lit like a catwalk. 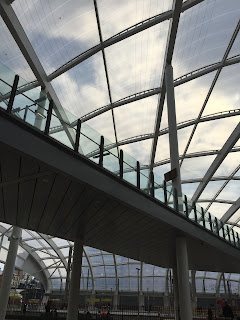 I was at the station with Ian and Robert.  Ian was making one of his sadly infrequent visits to the north, and when we asked him what he wanted to do while he was up here, he said "I'd like to see the new Manchester Victoria."  And this is why we're friends. 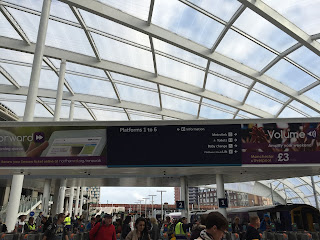 They've also installed ticket gates at the station, a fact which came as something of a shock to a lot of the passengers; there were long queues at the information desk as people were forced to actually pay for their trip.  We tripped through onto the older concourse, which has also had a makeover.  There's a Starbucks there now, for a start, despite the fact that they already have a store about eight yards away on the corner of Cathedral Gardens.  The bar has had a gastro makeover to turn it into The Beer House "bar and kitchen", in the traditional spot of the station restaurant. 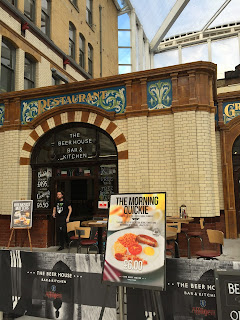 It looks trendy and hipster-lite, but it's actually just another of SSP's brands; this is basically a Pumpkin with pretensions, so expect overpriced beer and food.

It also demonstrates the clash of Victoria's 19th century main with the brash modernity of the 21st.  There are some utterly beautiful heritage features at Victoria which have been restored as part of the rebuild.  The famous tiled map, for example, now copied shamelessly at the new Wetherspoon's at Lime Street: 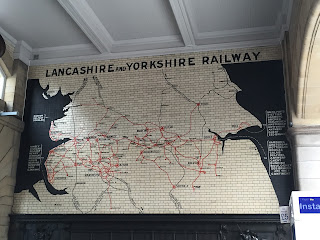 The wooden ticket windows are also present and correct: 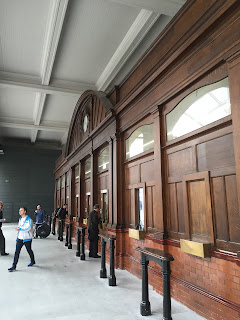 Look above them though, and you can see that the gleaming TFE roof has created a new set of problems.  There are bits of the station that were never meant to be seen, and now their plain brickwork and staining has been revealed to us all: 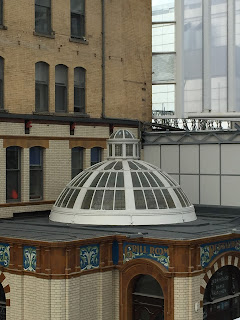 In other places, the tiling still marks out the old roof, making the renovations seem clumsy. 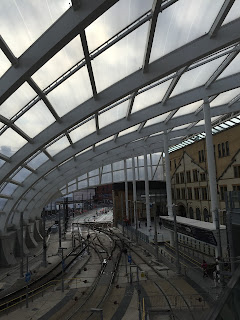 I wish they'd extend the tilework right up, carefully matched of course, to complete the effect.  This way it looks unfinished and messy. 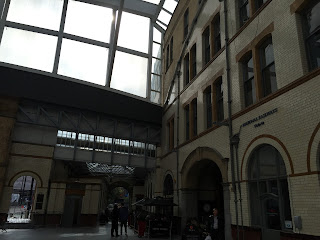 Is that Regional Railways sign now a heritage feature, do you think?

The other problem Victoria has, and always will have, is that damn Arena.  The new roof is gorgeous, but really the only people to benefit from it are Metrolink passengers and the terminating services to Leeds.  The through lines - the lines that are going to get busier and busier as more east-west services are sent through here instead of Piccadilly - are still ejecting their passengers into a cave. 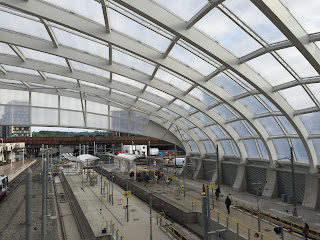 We left through the side exit, where the work on the tram's Second City Crossing has turned the roads into a confusing mess.  I was pleased to see that the Exchange Square stop seemed to have been finished already. 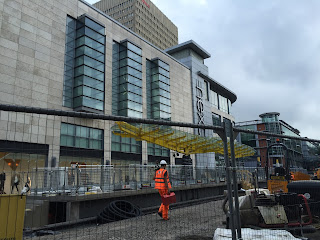 As we crossed the city centre on our way to Home, the recently opened replacement for the beloved Cornerhouse, I couldn't help feeling a little disappointed.  All that work, and Victoria still feels disjointed and second class.  This new look should have blown me away, made me pump my fist in the air with joy.  Instead the roof feels like an alien spacecraft, landed on top of the station and separate from the rest of it.  Like a bad birthday present that's been put in expensive wrapping to conceal its mediocrity. 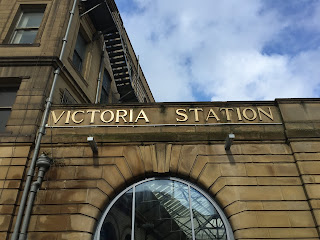 On the plus side, I saw it with friends, and that makes everything better. 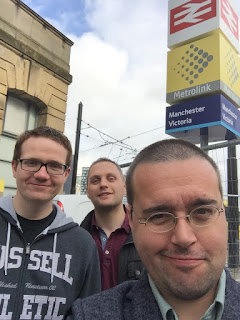 Do you do requests? If so, +1 for The Return of the Beard.

This isn't a democracy, G. Though you never know what you'll get if you make a generous payment to my Swiss bank account.