The Long Way Round

Dear Railways of the United Kingdom

Hi!  Scott the Merseytart here.  Big fan.  Pumped loads of money into you over the years - hope you're grateful!  (How about some freebies?)

I'm writing because sometimes, now and then, you annoy the hell out of me.  I hate to criticise, because criticising the railways is lazy and reductive.  We complain too much in this country; we complain about the railways and the BBC and the NHS because one part of it annoys us, and let a huge amount of good stuff just trot by.  We'll spend day after day, week after week, catching a service that arrives on time and is fast and goes where we want to go, but the one time there's a broken down train the British rush to shout "Typical British Rail!  What does my season ticket money pay for, eh?"

But a recent trip to Yorkshire provoked feelings of resentment and anger towards you, and I'm going to have to vent them here.  Don't take it too personally; I love you really.  You could just be a bit better.

Compared to other stations around Goole, Saltmarshe is positively overburdened with trains.  The Sheffield-Hull trains don't all stop there, but there are enough trains in the peak hours to constitute a relatively good service.  There's no need to spend eight hours in the pub, put it that way.

Regular readers will know I like to walk to and from stations; I visit them both as a pedestrian and as a passenger.  And here, railway bosses, is where I encountered my first problem of the day.  Getting from Goole to Saltmarshe on the train takes five minutes: 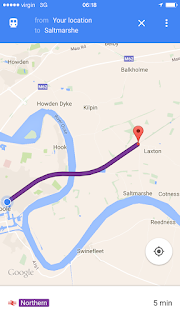 Walking, on the other hand, takes two and a quarter hours: 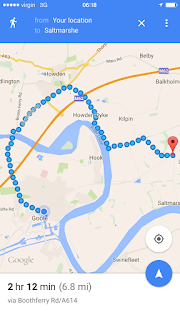 The simple reason for this is the river Ouse, looping around Goole.  I accept that it's expensive to build bridges, particularly footbridges over major rivers.  But there's a railway bridge right there.  Railway companies: can you not string a little footbridge along the side for us walkers?  We're no bother.  A footbridge on the side of the rail bridge would have cut out that huge diversion for me. 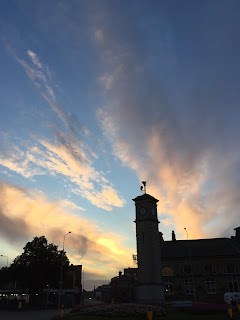 Instead, I got up a 5 AM so I could get to Goole for the first train to Saltmarshe.  It was an astonishingly pretty morning.  Pink and yellow streaked the early skies.  It almost made me sad to leave.  My train slowly pulled out of the station, burdened with dozy commuters, then crossed the aforementioned bridge: 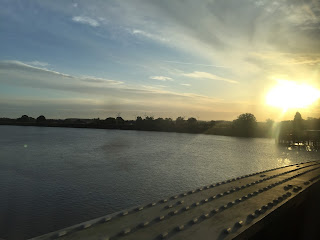 See?  Just a little footbridge.  Nothing fancy.  Right there.

Across the way I was deposited at the idyllic country station of Saltmarshe.  Close your eyes and imagine what a station called Saltmarshe should look like. 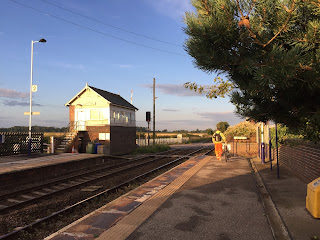 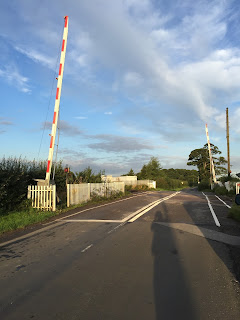 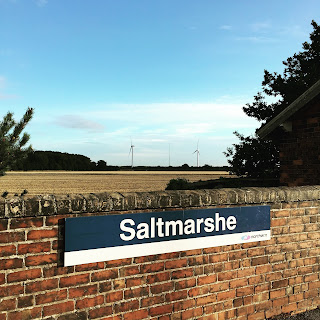 Check, check, check.  On that morning, peaceful and sunny, it was exactly where I wanted to be. 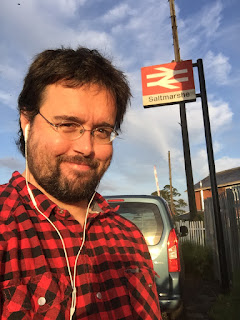 I went and sat in the brick shelter on the platform to eat my breakfast: a bag of Haribo Tangfastics.  I'm not a big fan of Haribo, largely because of their truly awful adverts, and Tangfastics are not tangy enough for me (you're reading the work of someone who has to put three Extra Strong Mints in his mouth at once to get any kind of buzz), but I'd bought them in Slaith while under the influence of all those pints.  They were ok, a bit bland, but at least the sugar buzz stopped me from dozing off. 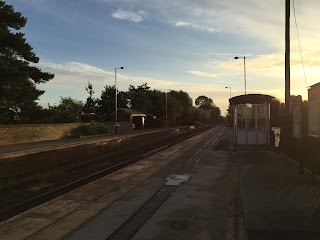 Not long before the train to Gilberdyke arrived, a young woman joined me in the shelter, reeking of perfume and resentment at being up so early.  She applied mascara as her stomach rumbled.

Here's my second complaint, Network Rail: I wanted to get from Saltmarshe to Pontefract Baghill.  Here it is on a map.

The two stations are in vaguely the same solar system.  The only way I could get there, though, was to travel from Saltmarshe to Gilberdyke, then wait an hour.  Then a train from Gilberdyke to York, to wait another hour.  To kill the time, I bought a chicken wrap from a trendy food place on the platform; only on eating it did I realise it was gluten-free, and I suddenly got an insight into why people with food intolerances can get so angry.  Finally, having spat most of the wrap into the bin and bitterly regretted not spending my four quid at Burger King where at least my low expectations are met, I was on board my third train to Pontefract Baghill. 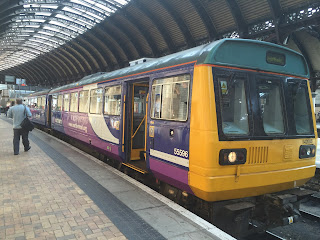 Is this any way to run a railway, eh?  An as-the-crow-flies journey of 25 miles turned into a lengthy trip of more than double the distance?  Hours after I'd left Saltmarshe, I was finally able to unfold onto the platform at Pontefract Baghill. 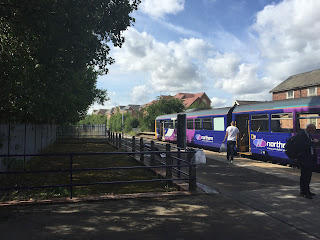 Remarkably, for a town of its size, Pontefract has three stations, all relatively close to one another.  I'd already visited the magnificently named Pontefract Tanshelf, which serves the racecourse.  Baghill is on one side of the town centre, and Monkhill is on the other side. 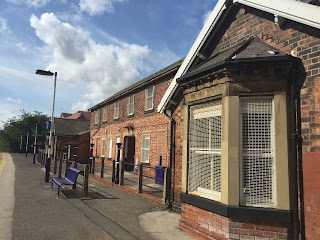 Baghill still has its buildings, but in that kind of twist of fate that exists in real life but would be laughed out of a script conference, the station is now a driving test centre.  Clumsy symbolism alert! 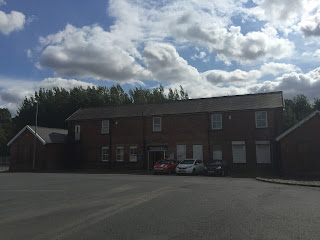 It's no looker, but it has a simplicity that's quite appealing.  I made my away across the tarmac, behind a nervous test subject who was taking way too long to get her Micra out onto the main road, and headed into the town. 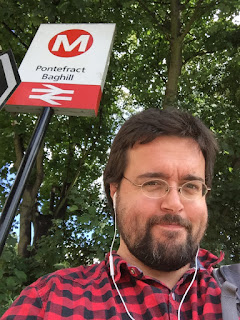 I had an idea of what Pontefract was going to be like.  I'd only skirted it on my last visit, and I was looking forward to visiting a historic town with a castle and plenty of ancient buildings.  A sort of Chester, or Warwick.  Instead, I saw this. 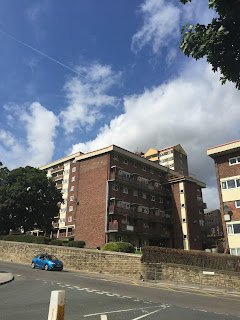 High rise flats stacked into the hillside.  Behind them, more flats.  I was confused.  Surely these were the exception?  There were prettier, older buildings behind? 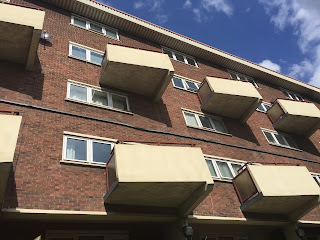 I walked around them, staggering up almost vertical slopes, and found... more of the same.  Pontefract wasn't the gem of West Yorkshire I'd expected it to be.  It was another ordinary, dull little town, another place with a redbrick precinct and a Farmfoods and a load of pound shops.  The streets had properly medieval names - Horsefair, Beastfair, Cornmarket and, I'd spotted on the map earlier, the amusingly titled Slutwell Lane - but they were lined with ugly buildings.  Only the Market Place hinted at finery. 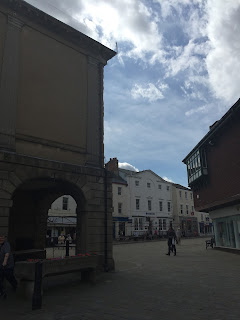 Disappointed, I walked round the bus station to find Monkhill.  The road circled the castle, but I never saw it.  The hill it was built on was too high, and the building on top was too small.  All I saw were a lot of old stone walls and trees. 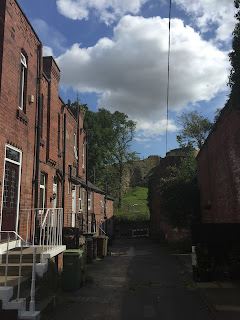 The sign for Pontefract Monkhill took me by surprise: there was no trace of a station building, just a road heading towards a bridge. 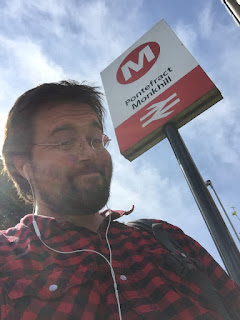 In fact, there was no station building at all, just a void where it had no doubt once been before "rationalisation" decided it was far too welcoming and attractive and replaced it with a Meccano set on a hill. 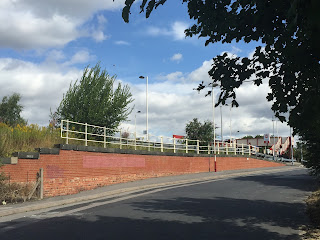 The only good part of Pontefract Monkhill was that finally, from its footbridge, I got a view over the rooftops that made the town look like I'd imagined it would be. 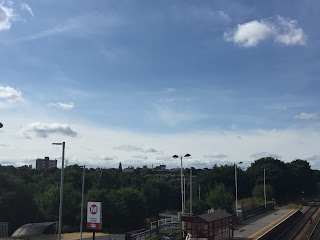 Unfortunately, in the opposite direction, that historic vibe was destroyed by Ferrybridge power station looming over everything, but never mind. 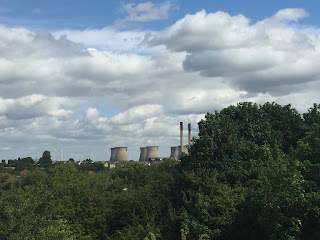 Knottingley is the last one in West Yorkshire, and it has a real end of the line feel to it, even though it's a through station.  To reach it you pass under motorway flyovers, acres of concrete and graffiti, and then you end up amidst a web of sidings and weed-infested tracks.  The passenger facilities are secondary here to the goods lines. 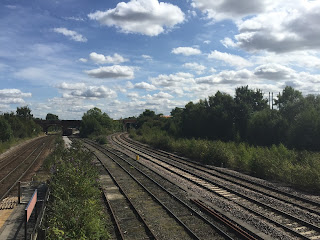 The train set off down the tracks, ready to turn round and become another Leeds service; on the platform, two Metro employees sat down for a rest.  They'd been checking tickets on the train as a market research effort, and looked very enthusiastic with their clipboards.  I suppose it was a day out of the office for them. 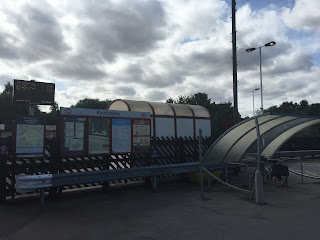 Outside the station was a builders yard, with a sign warning that cars caught parking in front of the entrance would be removed if necessary by fork lift truck, and then a stout pub.  Again I wondered how many pubs were called the Railway.  Must be in the hundreds. 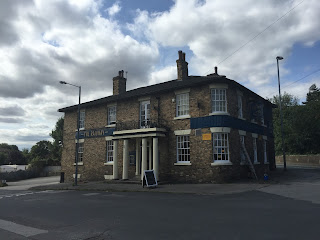 The idyllic blue skies were beginning to be tinged with darkness as I took my sign picture.  I had two more stations to collect that day, but they only got services in the evening.  I had an afternoon of dozing in a Premier Inn to look forward to first. 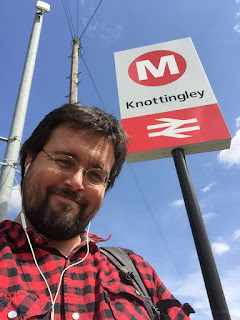 Interesting that Saltmarshe's sign appears to use a BR-like font rather than the more modern looking one Northern usually use.