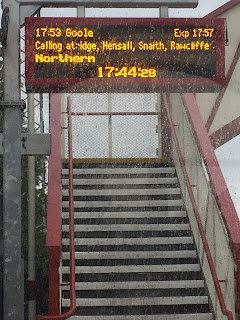 I returned to Knottingley amidst a summer rainstorm.  It was sudden and heavy, the first shot of autumn being fired across the bows.  I'd not got a coat so I hid in the shelter and hoped it'd pass before I had to walk between stations.

A train came in at the opposite platform, depositing the last of the rush hour's commuters, and they scurried across the footbridge with coats over their head.  Then I was on my own again, until the Goole train came in, that one evening service. 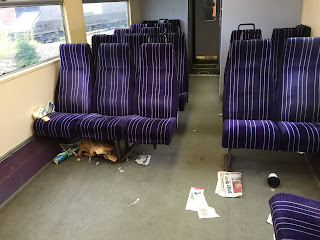 It was easily one of the filthiest trains I've ever been on.  There was litter everywhere, on the floor, the seats.  I guessed that it had been defiled by schoolkids, bored in the last weeks of the holiday, celebrating their day out in Leeds by making life a little bit shittier for everyone else.  I found a rare seat that hadn't been violated for the trip to Whitley Bridge.

En route I saw something I don't think I've ever seen before: an actual working coal mine.  I've traveled all over the north and all I've seen are legacies of the mining industry.  Abandoned husks of towns, working men's clubs, the odd piece of preserved machinery.  This was a real mine though, with mountains of black crisscrossed by conveyor belts.  Of course, it's also marked for closure, and come January it'll be gone. 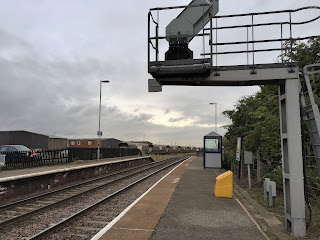 I got off at Whitley Bridge with one other person, a young woman who'd moved carriages when I'd got on the train at Knottingley.  I'm being charitable and assuming that she'd moved because she didn't want to be in an empty carriage with one man in case I was a sexual pervert.  Either that or I have a massive B.O problem. 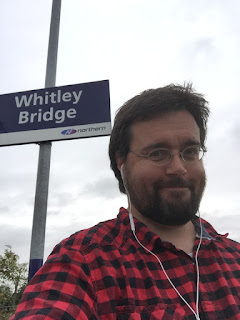 I set off into the village at a super-fast pace.  I had just over an hour to get to Hensall, the next station along, or I'd miss the one and only train back to Knottingley.  I didn't fancy being stranded at the station.  At least the rain had stopped.

A better name for the station would be "Eggborough"; that's the name of the village nearby.  I walked by pebble-dashed local authority houses, some of them with their doors open to let a breeze through.  The heft of a brick flour mill blocked out the sky; next door was a new development of "executive homes".  I bet the owners thought living next to a mill was charming, right up until that one in Cheshire exploded earlier in the year.  Suddenly every odd grind of machinery coming from next door will be tinged with tension in case you're about to get brained by your own front window. 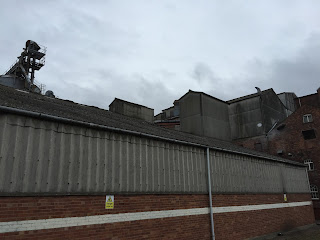 I turned right in the village centre - a couple of pubs, a Spar, a car showroom - and got my first glimpse of the cooling towers of Eggborough power station.  Eggborough, and its near neighbours at Ferrybridge and Drax, would be the reason for that coal mine continuing into the 21st century.  They're also the reason for the Goole line persisting, despite the criminally bad passenger service.  The line's there to bring fuel to the power stations, and human cargo is unimportant. 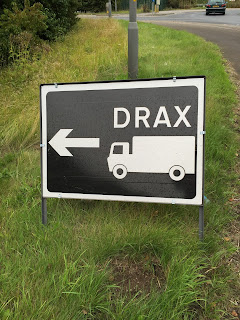 All the signs for Drax power station of course made me think of (Sir) Hugo Drax in Moonraker, because I am nothing if not obsessed.  Ian Fleming, being the magpie that he was, probably saw the village's unusual name and filed it away; the power station came after his death.  It gives the road signs an unintentionally sinister air - to me anyway.  It was hard not to see them and imagine that Drax was somewhere nearby, surrounded by beautiful women and building a new space station. 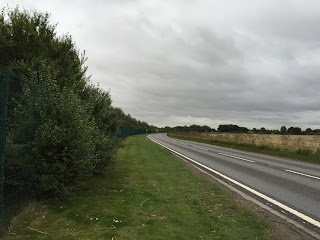 The Drax of the novel is one of Fleming's best villains, but Michael Lonsdale in the film is actually even better.  He's incredibly sinister and measured, each utterance half-whispered and dripping with menace.  It helps that he's got some of the best evil dialogue in the series: "Look after Mr Bond.  See that some harm comes to him," and "you appear with the inevitability of an unloved season," are absolute joys, and his grandiose speech to his perfect physical specimens on board the space station is pure brilliance.  I read the autobiography of the film's writer, Christopher Wood, and he dismissed Lonsdale's performance as tedious and one-note.  He could not be more wrong. 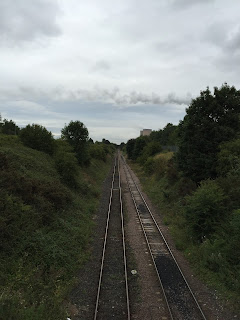 I passed over the power station's goods line, walking on the grass because there was no pavement.  Normally the only traffic I see on country roads are speeding cars, but this one was heavy with trucks.  I was glad there was room for me to walk on the verge, because I didn't fancy dodging them in the road. 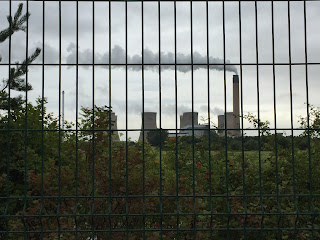 The factory for Saint-Gobain glass cause me to shudder involuntarily.  We recently got new windows, and the BF is always incredibly thorough when it comes to home projects.  Any large purchase is researched extensively, with a heavy reliance on spreadsheets and analysis.  The usual result is that by the time we actually get the new item, I am sick to the back teeth of talking about the bloody thing, and I never want to hear about it ever again.  Saint-Gobain's sign brought back unwelcome memories of lengthy discussions about acoustic glass and triple glazing and their manufacturing process versus Pilkington's and oh God make it stop. 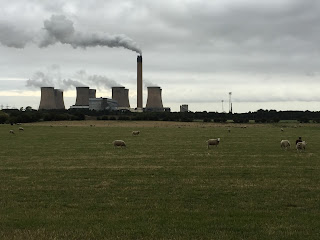 Could that shot be any more like a Britpop album cover?  Roughly 80% of the music produced in the mid-90s had a slightly depressing image on the front, with a bitingly satirical instrumental about the suburbs on the B-side.  In fact... 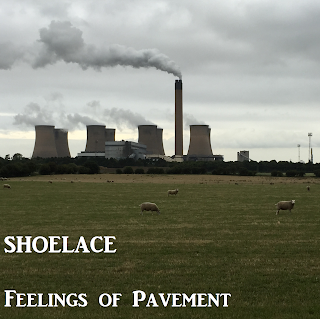 Coming to an Our Price near you!

There was a quarry, with a sign outside warning Danger!  Quarries are not a play area!  Frankly, I think children who have to be told that should be allowed in.  Thin the herd of some of the less intelligent kids before they get old enough to spawn.  I was fortunate, a little further on, to catch sight of a Guinness World Record holder: the ugliest house in England. 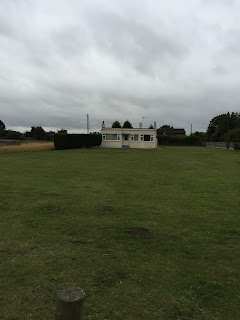 I assume the enormous lawn is for the protection of passers by, rather than for any aesthetic reasons.

A little further on was a level crossing; I'd have to pass over the railway then double back to get to the station.  Next to it was a speed camera, but behind that was a curiously sleek post. 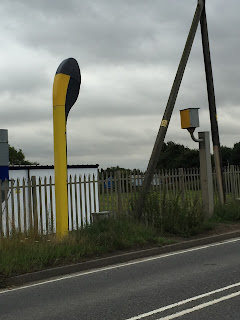 Closer inspection of its twin across the tracks revealed it was actually a Network Rail camera.  I presume it's there to monitor the safety of traffic passing over the crossing, and also to provide us with hilarious YouTube videos when a Ford Fiesta gets trapped and is then scythed in two by a goods train.  I like the design though; far more attractive than the boxy police camera, as if Apple did surveillance devices.  If we're going to have cameras watching our every move, let's at least make them pretty.

There was a stable around the next corner, with a couple of horses and, incongruously, a llama.  It stopped in its tracks and stared at me as I passed.  Is there a haughtier looking animal than the llama?  It's got a permanent face of judgement, like Margo Leadbetter in a fur coat.  While the horses carried on trotting round their paddock, the llama just watched me, making sure I passed without doing anything common. 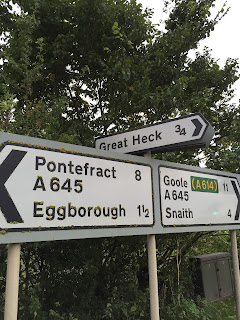 I really want to live in Great Heck.  It's like something Minnie the Minx would shout in the Beano.  "Great heck, that was a smashing pile of mashed potato with sausages poking out of it!"

Hensall's Station Road had some new houses, squeezed onto a tiny plot, and a playground.  There was one of my favourite features outside it, a village notice board, with the minutes of the parish council and a poster for the Hensall carnival on Bank Holiday weekend.  There was a bit of a design whizz on the committee, it seemed; a simple call for tug-o-war teams had been turned into a Soviet propaganda poster. 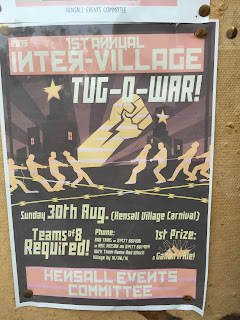 I fell in love with Hensall station at first sight.  It helps that it's one of those lonely, virtually unused stations that mean I can temporarily claim it for my own.  I'm always pleased to give a station a bit of life.  I like to imagine that somewhere at Network Rail, a little counter trips over one spot with my arrival. 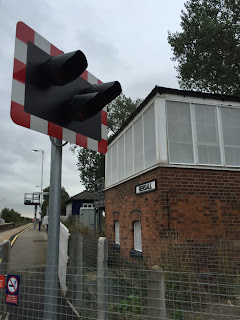 More joyously, the owners of the Station House have embraced their railway location and turned their home into a tiny museum. 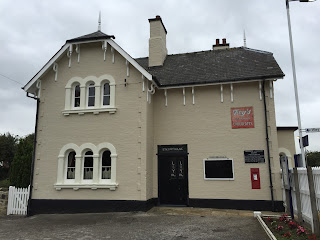 Not only was it a charming home, well-looked after, but they'd decorated with period appropriate tin signs.  I was annoyed that I was on the wrong platform, and couldn't inspect them properly. 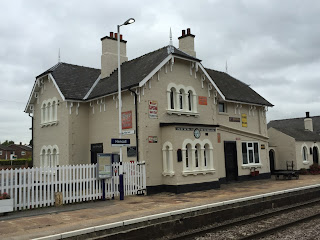 Even better, that station clock actually worked.  I wanted to knock on the door and tell the residents how great they were.  Bless you, Hensall station house owners.  You're doing God's work. 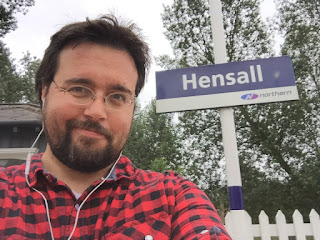 fun fact: llamas make good guard animals for livestock. They make a lot of noise and get between you and the other animals if you get too close. It's probably not just a case of "let's just get a llama because why not", although that is a valid reason too.

A quick bit of counting based on your end of year post and scanning 2015 posts makes me reckon that you have just under 50 stations left... I demand a countdown for the final tarts!

I would do a countdown but I'm pretty sure my calculation is wrong, and that would be embarrassing...

Surprised you didn't mention probably the thing Great Heck is known for?
https://en.wikipedia.org/wiki/Great_Heck_rail_crash

I didn't realise that the rail crash happened at Great Heck: I'd always heard it referred to as the Selby rail crash.