I stood on the platform.  Staring. 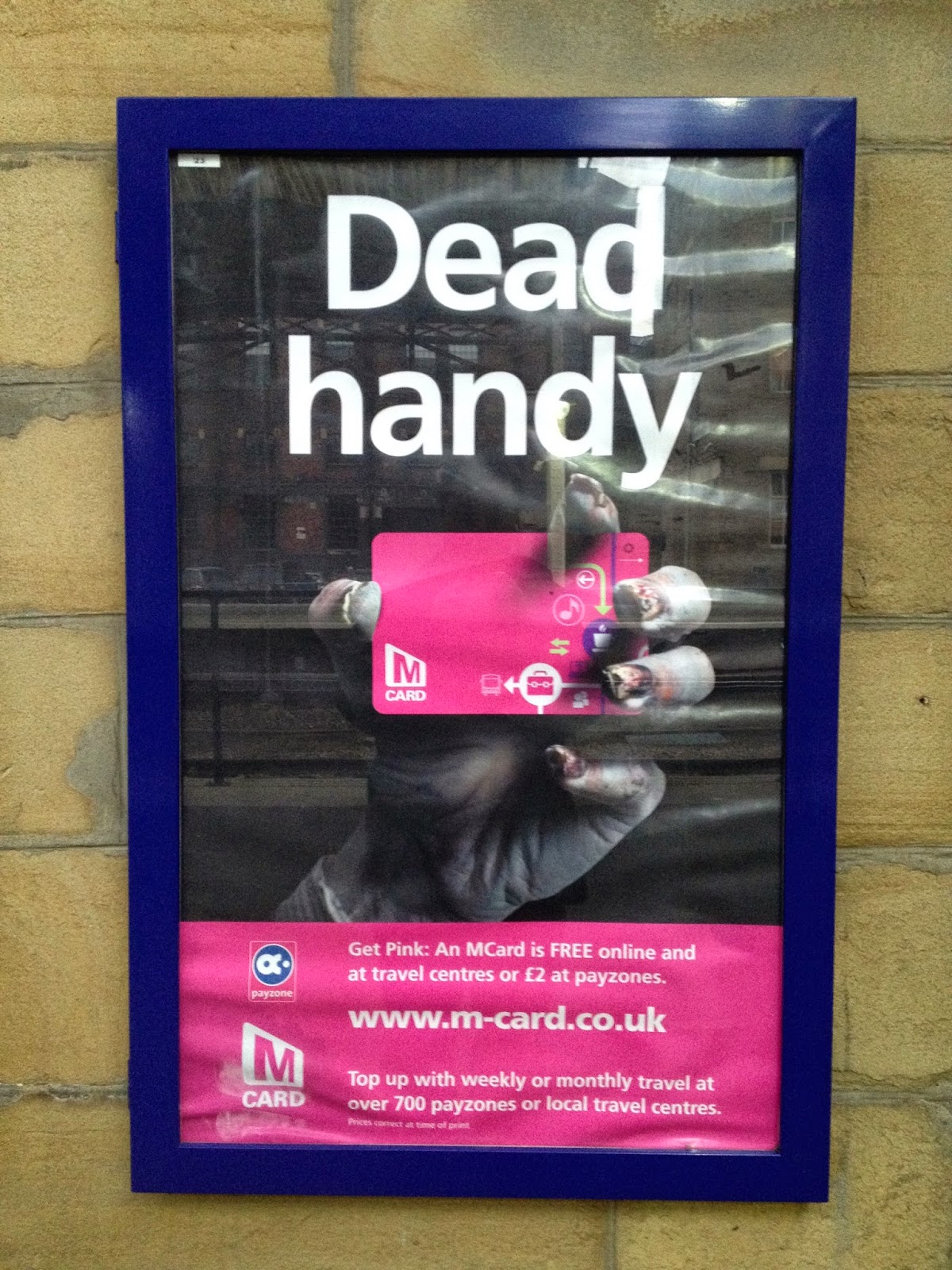 I know advertising execs operate on a different plain to us mere mortals, one where they think "Chocolate = a gorilla playing Phil Collins!" and "Outrageously unaffordable loans = puppets of old people!", but really.  Sign up for our new smartcard - as used by zombies!  I can only assume someone in the office said the words "dead handy" and they followed a train of thought.  A train that probably should have been derailed.

I was back in Huddersfield to complete some unfinished business.  Regular readers (hello you!) might recall an incident a couple of months ago where I had a small... moment.  I abandoned a planned trip to the Penistone Line and instead spent the day in bed feeling low and miserable.  The line remained unfinished.

So even though I was only in Huddersfield a couple of weeks ago, I'd returned to the station to polish it off.  I wasn't going to be defeated, dammit. 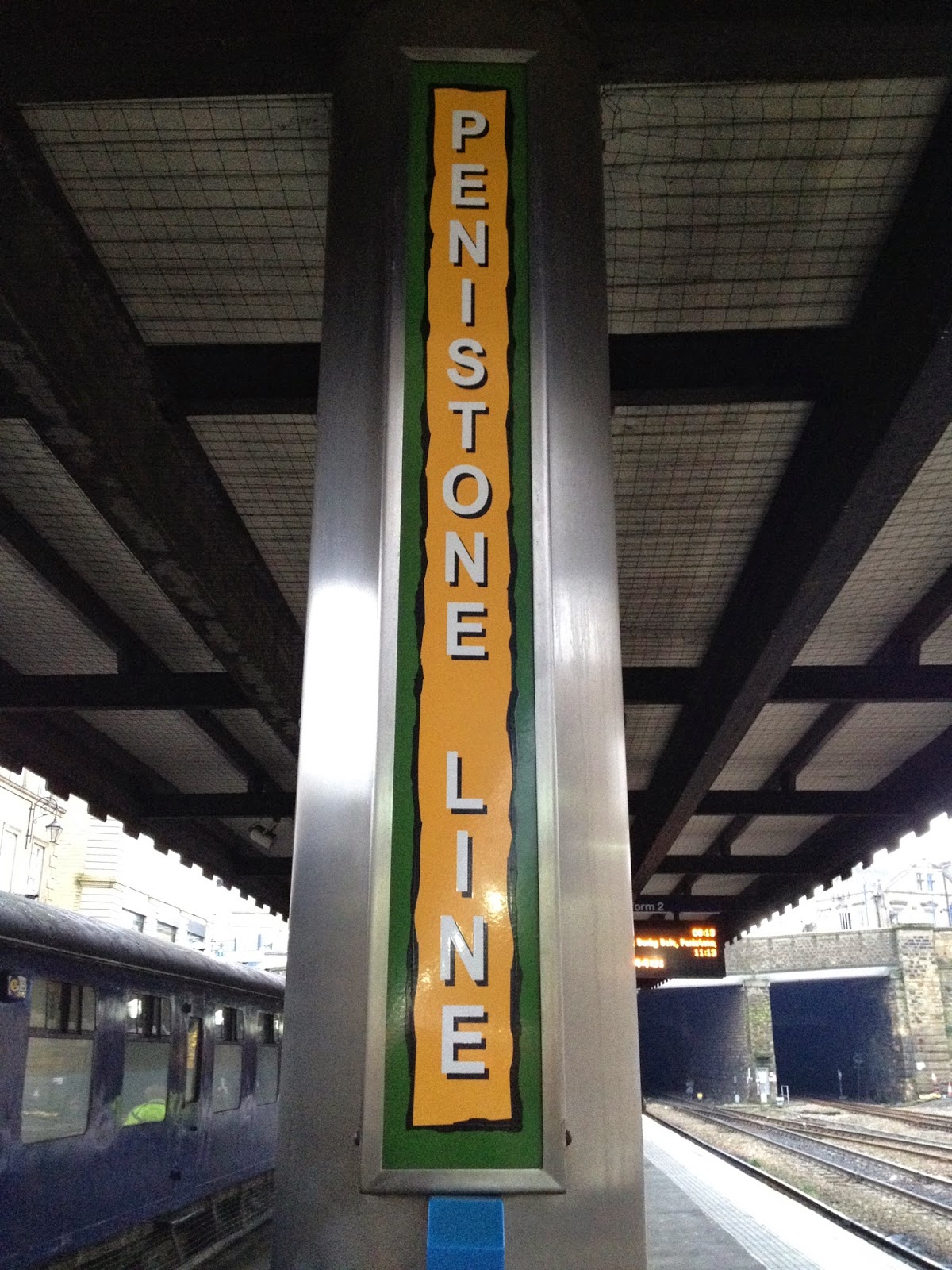 Besides, it's the Penistone Line: a gift to smut lovers like me.  It's got the word Penis in it.  I was barely on the train before I started yuk-yukking like Finbar Saunders.

We zoomed through white hillsides, over the county border into South Yorkshire, and stopped at Penistone.  It was a busy station, with a horde of passengers ready for their trip into Barnsley or Sheffield.  Two workmen were shoveling the snow off the platform, stacking it up at the end while their supervisor took pictures with his phone.  I assume it was for some sort of evaluation purposes, and he wasn't just admiring the fragile beauty of the wintry scene. 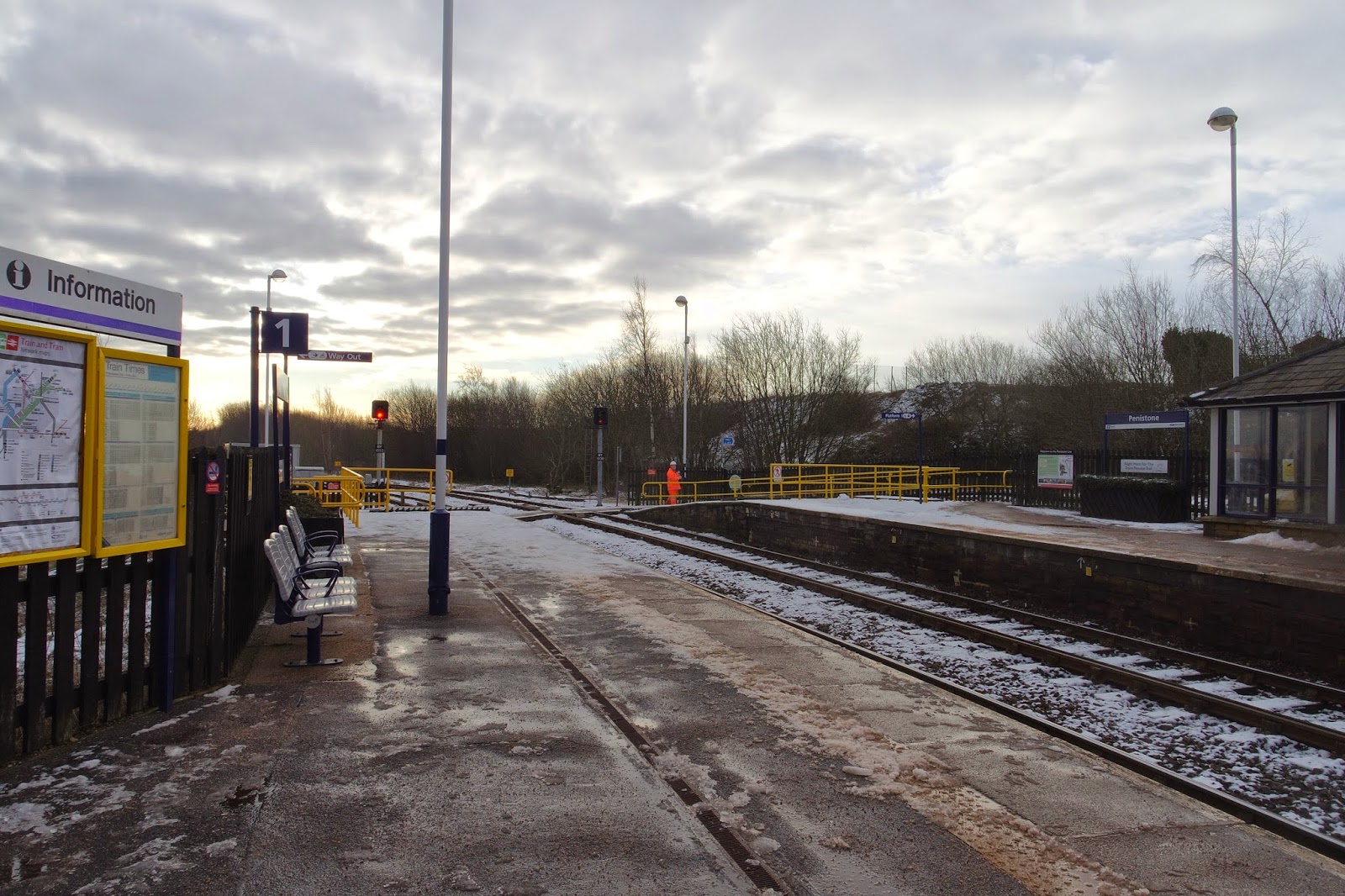 I do know it's pronounced Pennystun, by the way.  It's a shame.  I feel they should embrace the smuttiness of their name.  IT'S PENIS-TOWN.  Sell t-shirts and postcards and key rings.  This is Britain, home of the Carry On films: go with the fact that everyone is going to snicker when they see it written down. 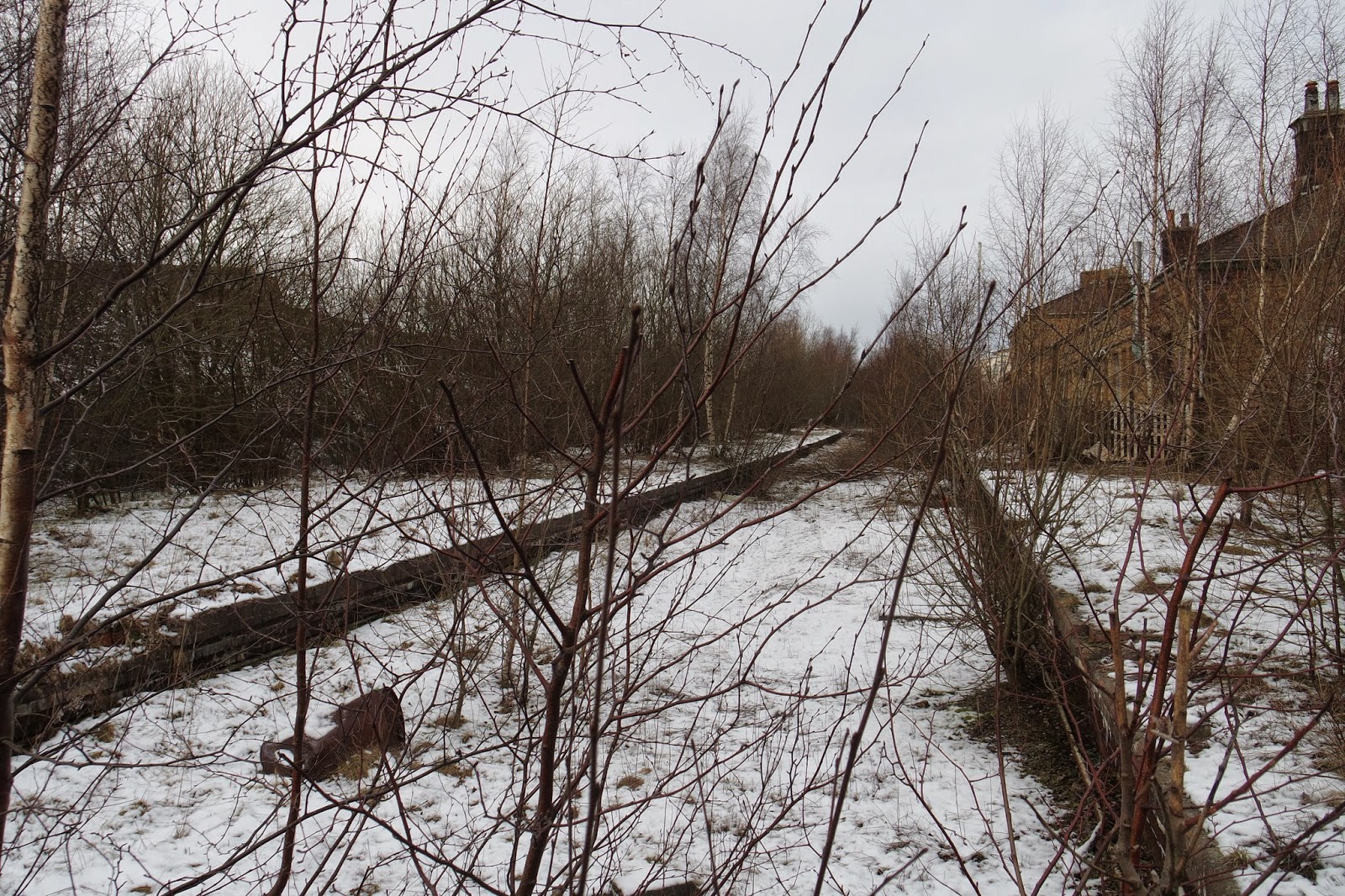 Penistone used to be a junction, with a further two platforms the other side of the now closed station building.  The second line headed off to Manchester through a tunnel under the Pennines on famous Woodhead Line.  This was the first line in the country to be electrified using overhead lines, but, in a typically British fudge, the system used wasn't adopted for the rest of the country.  The Woodhead Line remained as a strange blip until British Rail decided in the early Eighties that people really wouldn't want a fast electric train route between Manchester and Sheffield and closed the whole thing.  It's part of the Trans-Pennine Trail now, though there are periodic calls for it to be rebuilt. 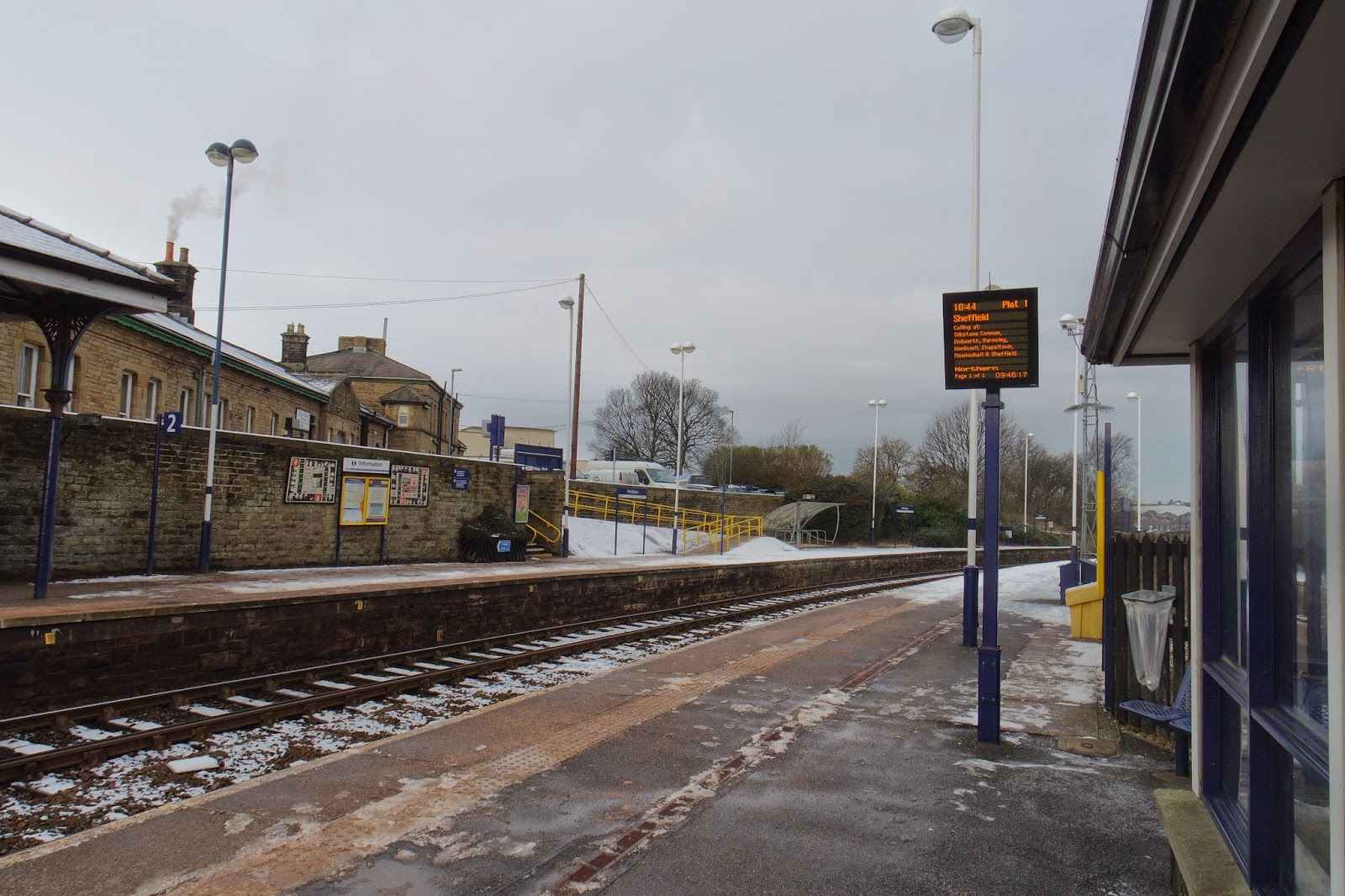 I'd be visiting the other end of the Woodhead Tunnels at Hadfield later on, so I headed down the slippery road outside the station into town, pausing at the bottom for a smirky sign picture. 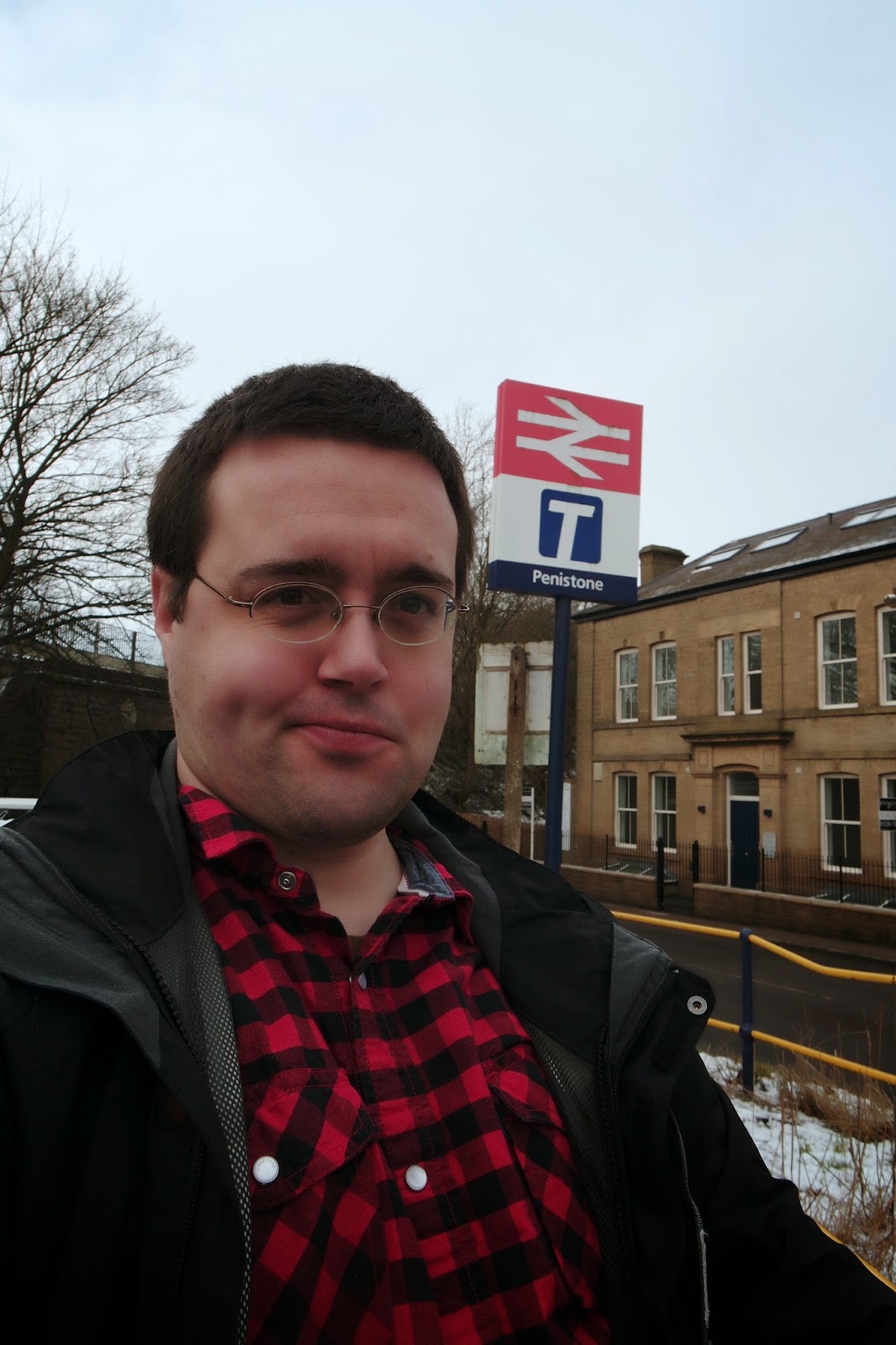 I had an hour until the next train south so I decided to go on a walk round the town centre in search of filth.  I'd decided that Penistone must be filled with all sorts of smut and I wanted to laugh and point at every double entendre I could find, because basically I'm a twelve year old boy. 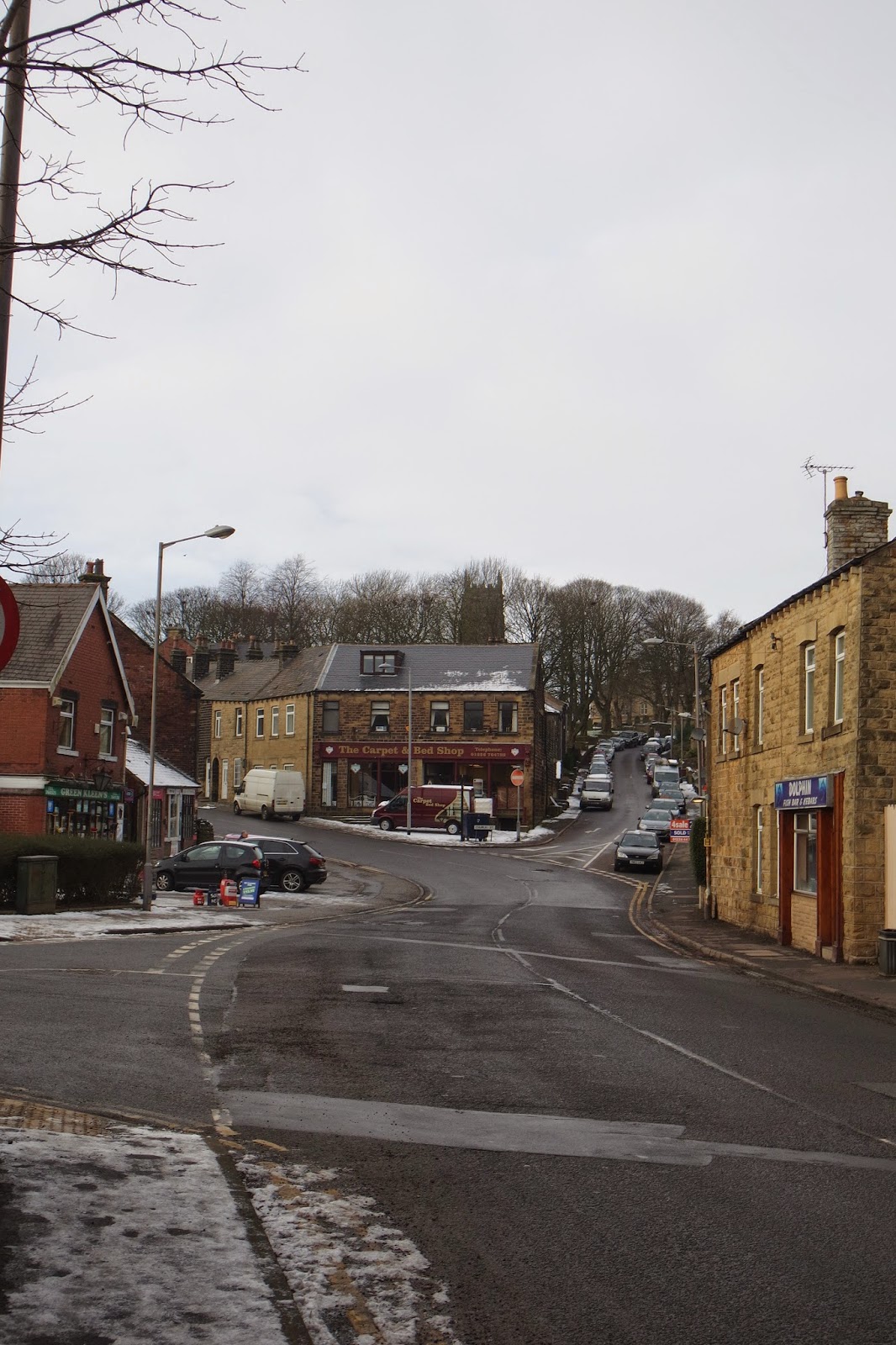 Initial signs weren't good.  Penistone seemed like a perfectly reasonable small market town.  There were chippies and dog grooming parlours (dog groomers seem to be the new tanning salon; every town has one) and a home interiors store.  They had a sign in the window advertising Bill Beaumont Textiles, and I had a quiet giggle to myself at the thought of the former rugby player squatting over a knitting machine.  I felt quite foolish when I got home and found that, yes, it is that Bill Beaumont; the former Question of Sport team captain has a family history in the world of soft furnishings.  Live and learn. 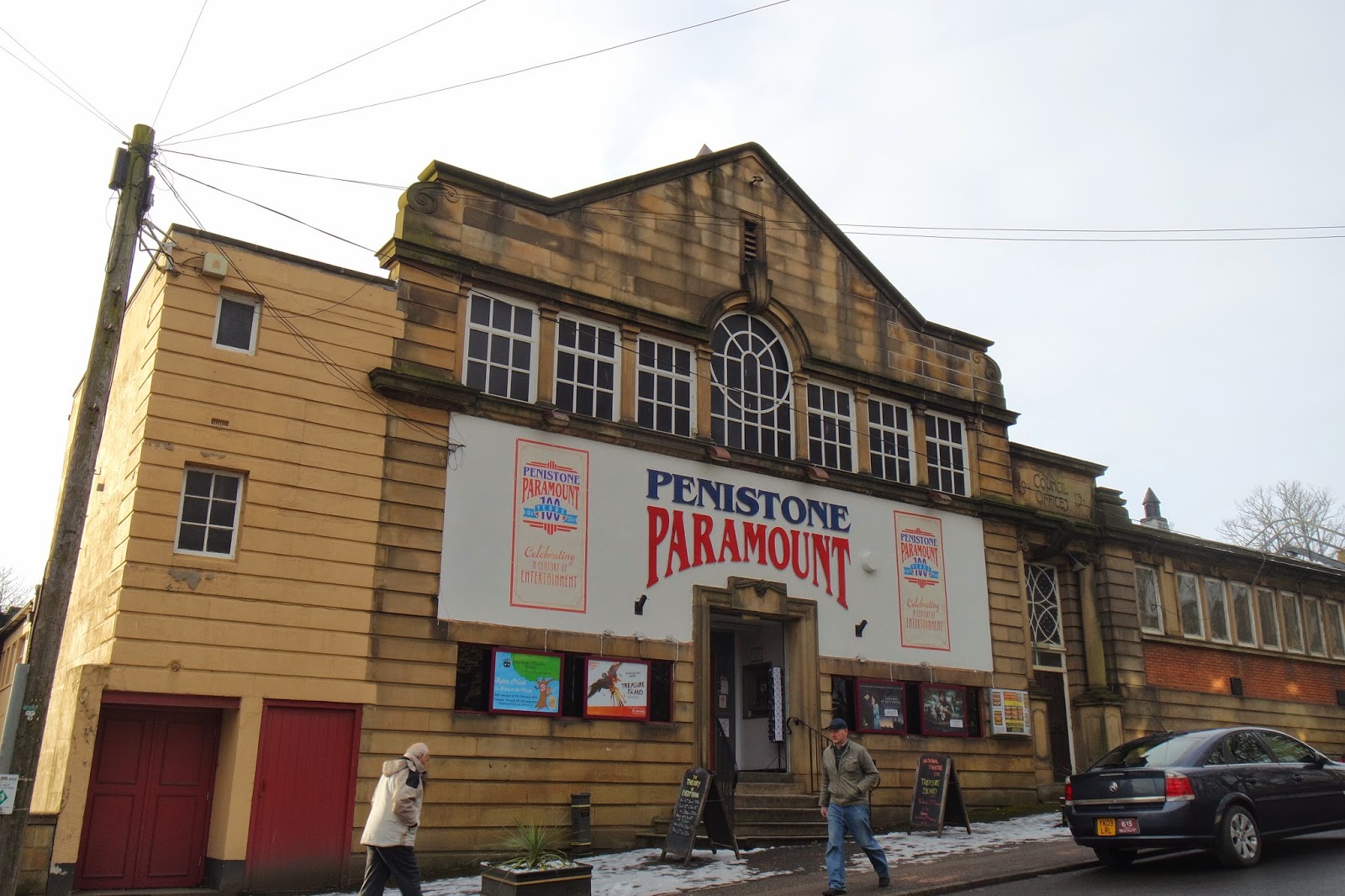 I struggled to get a decent eyebrow raise out of the Penistone Paramount, not least because it's lovely to see a small local cinema still functioning in the era of multiplexes and Netflix.  They were showing The Theory of Everything and the latest Hobbit, two films I'd only see at gunpoint, but good on them anyway.

Past the parish church, into the main street.  There was a pub called The Spread Eagle, which is sort of rude, but it looked far too classy to indulge in that sort of undignified filth.  A small cafe with gingham curtains had windows obscured by steam, while a man sat in Greggs and ate a sausage roll with calm deliberation, each mouthful carefully considered. 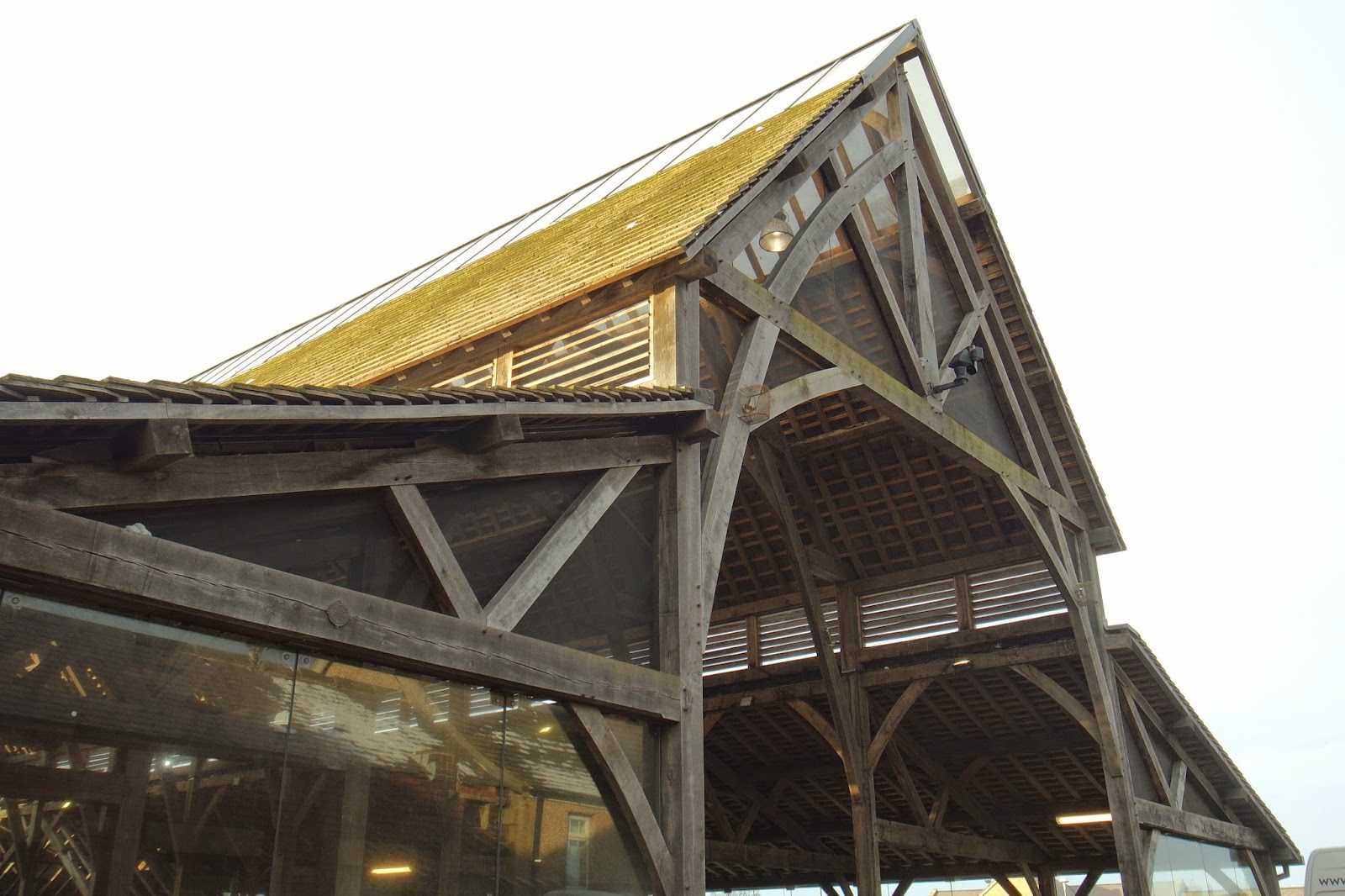 My attention was grabbed by the Market Hall.  Looking like an old barn, it was attractive and impressive, but I couldn't help noticing there were hardly any stalls in it, and even fewer patrons.  A glance further down the street revealed the reason: the car park of an enormous Tesco.  It was clear the timber-framed Market Hall had been built as a sweetener for the town, a deal with the devil to allow the construction of the huge superstore.  The town council had agreed, and now it found that no-one actually wanted to use the Market any more because the Tesco over the way was cheaper and you could buy a DVD and drop off your dry cleaning while you was there. 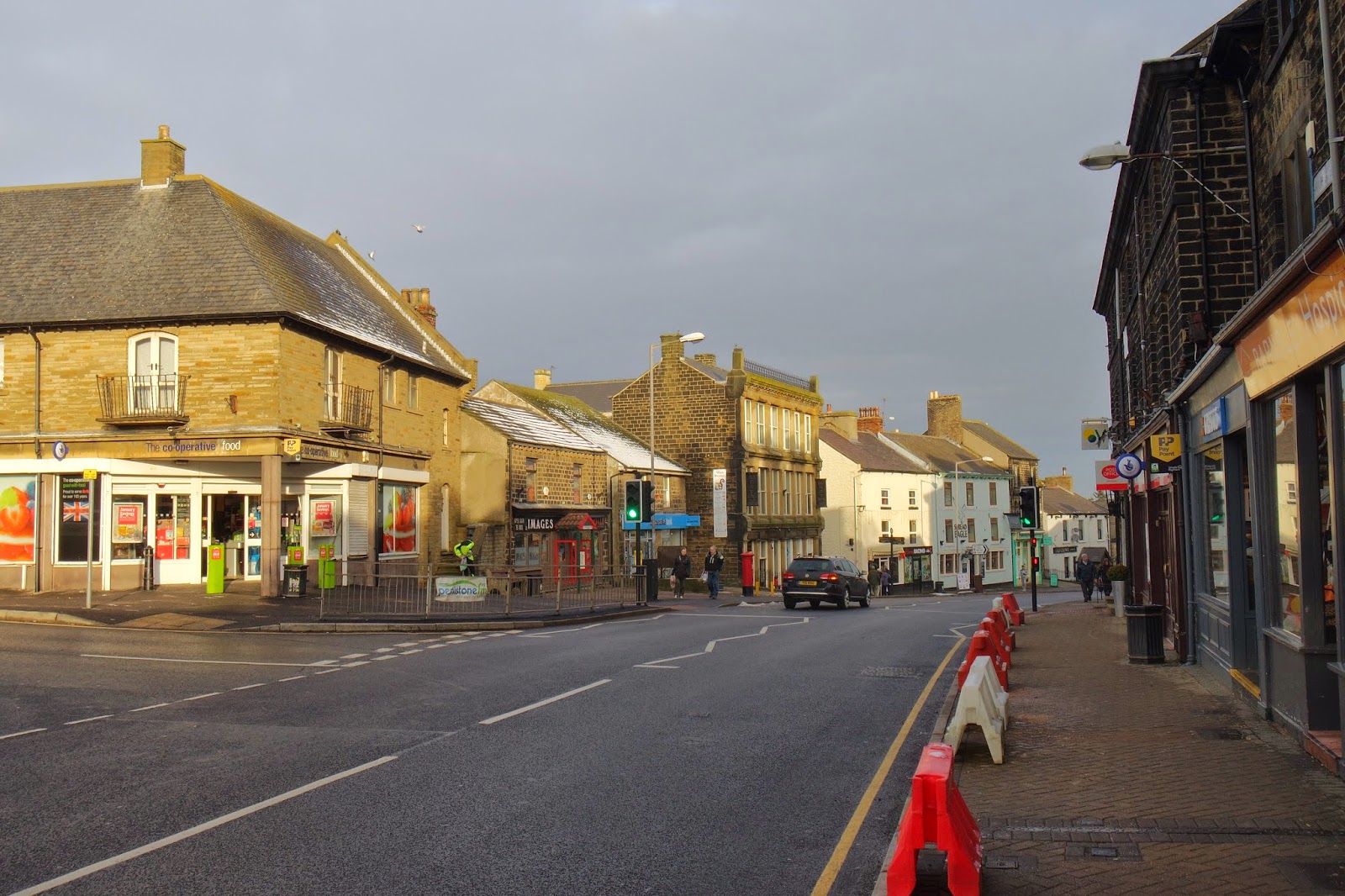 Back on the High Street a woman cowered when she saw my camera - "I don't want to be in your photos!".  I continued past a beauty salon that offered "HD Brows" - real life is High Definition; you can't do anything to your eyebrows to change that - then turned into the residential Victoria Street.  The pavements were slick with ice, so I walked slightly bow legged, each step like the start of an episode of Casualty.  When the way ahead curved down a hill I gave up and walked in the road. 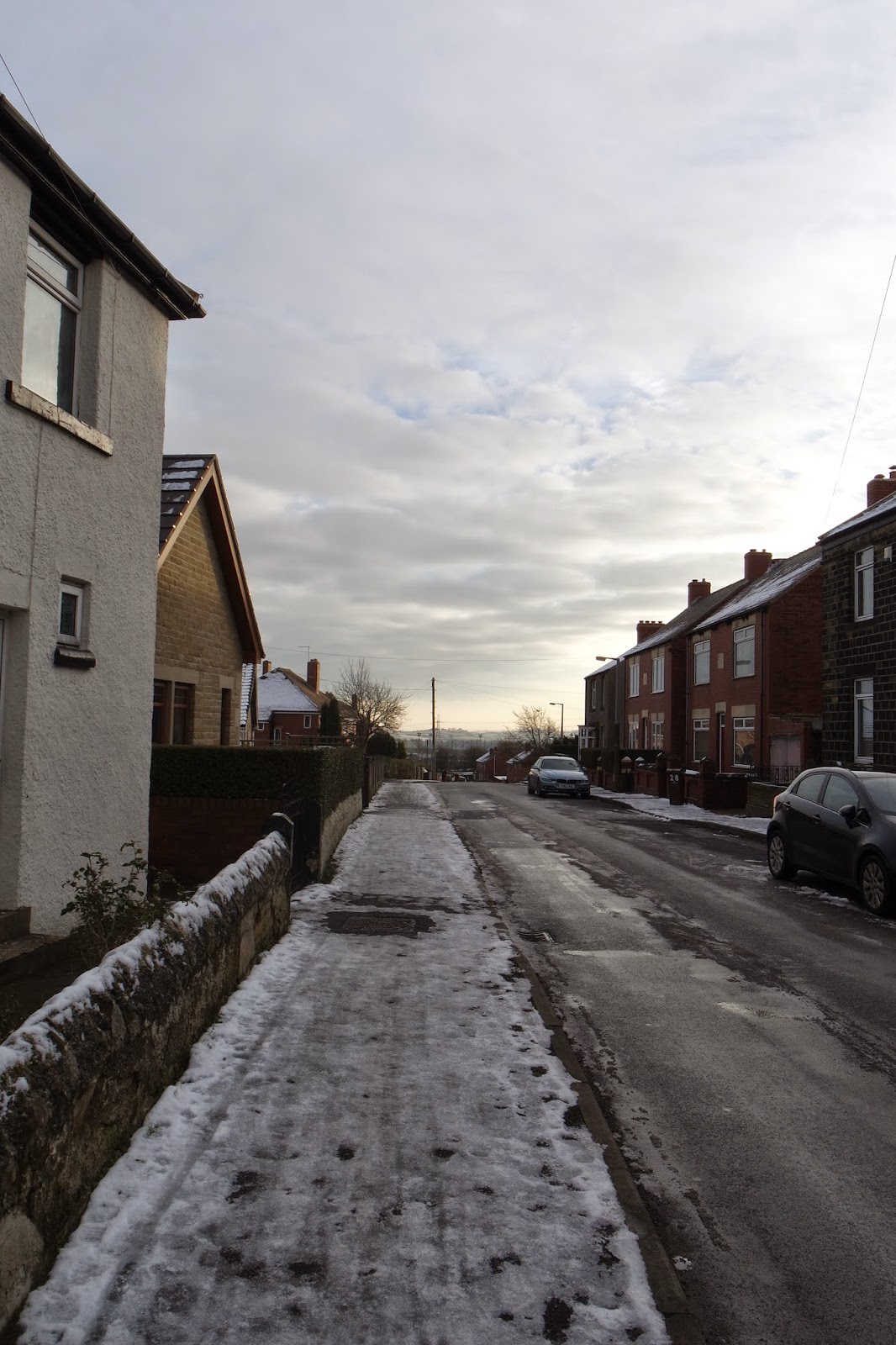 I was starting to feel guilty for laughing at Penistone.  It seemed like a perfectly nice little town.  I mean, I wouldn't want to live in a town with that name.  I imagined phoning up a gas company or a credit card and giving my address.

"Can you spell that for me?" they'd say, and you'd sigh and go through it.  After the fifth letter you'd hear a little snort down the phone, or they'd get annoyed with you for wasting their time, and you'd wonder why you hadn't just bought that house in Denby Dale instead. 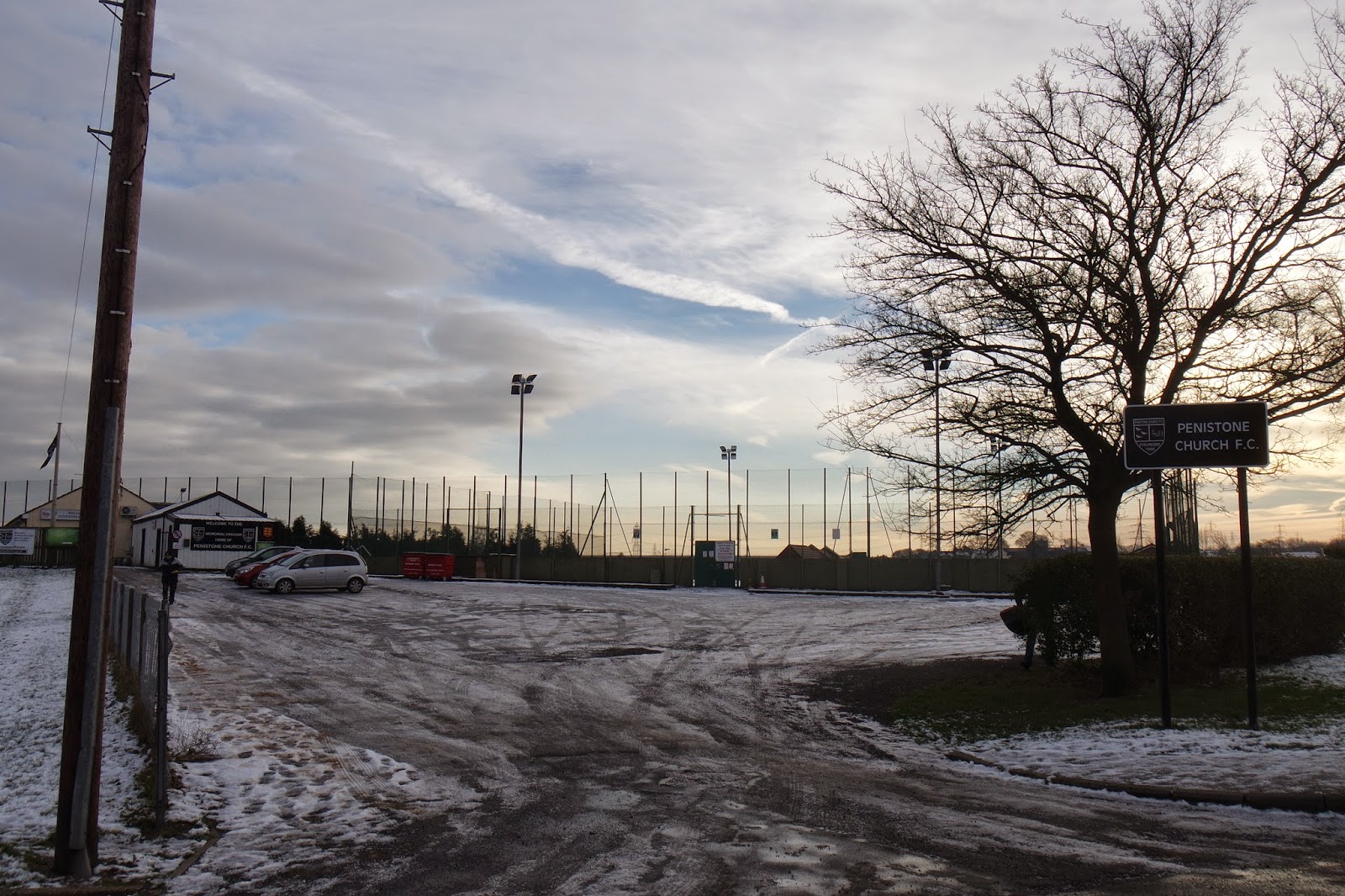 After twenty minutes I was back at the entrance to the station again.  It was too cold for me to just sit on the platform so I went back into town, taking a different route.  I paused at a noticeboard which informed me that the local horticultural society has a website at http://growpenistone.org.uk/, a website that is probably blocked by a lot of workplaces.

Yeah, ok, I didn't feel that guilty about laughing. 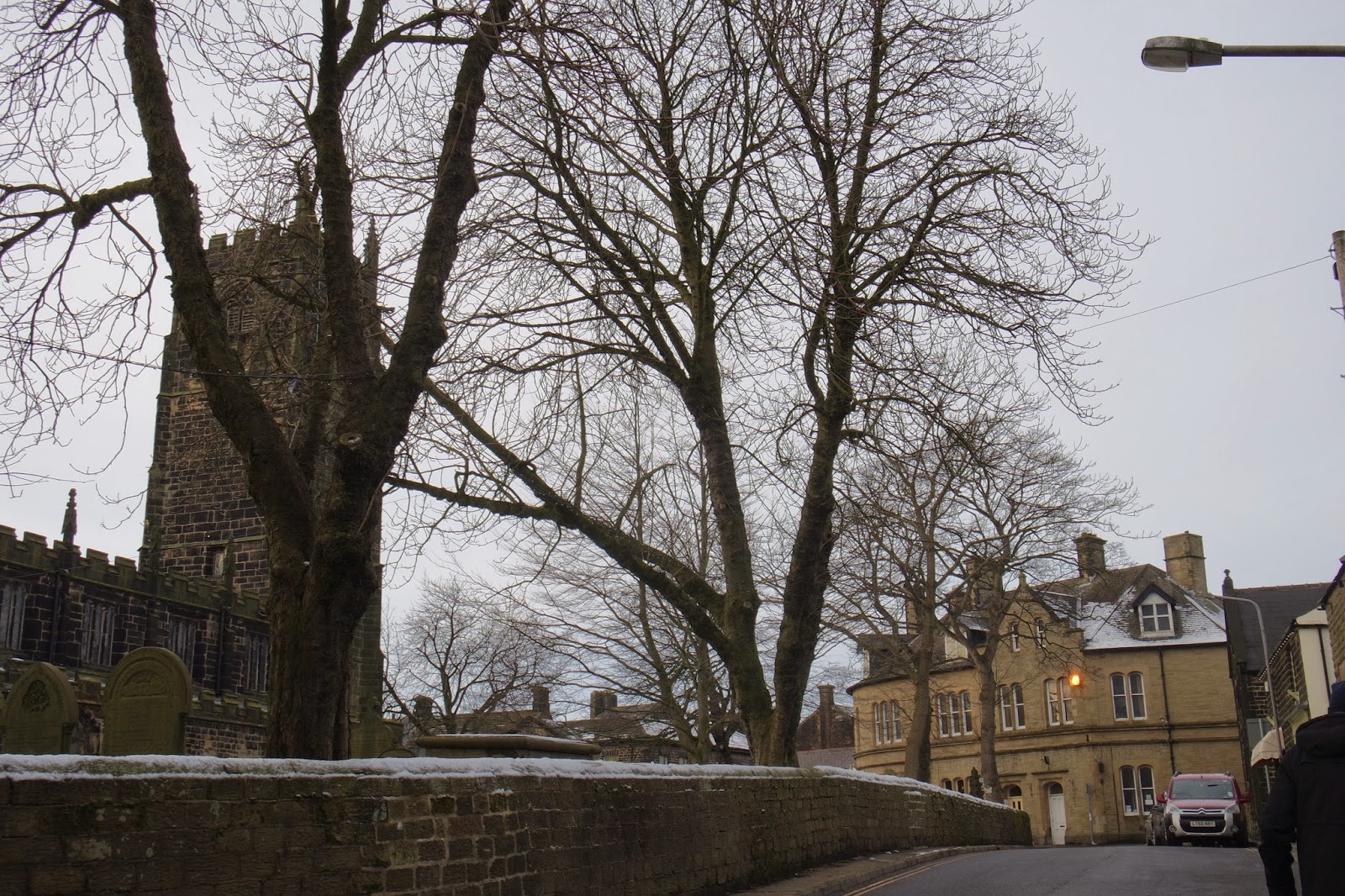 Walking up the hill I got a bit of a shock when a skinhead emerged from a side passage.  He didn't come at me with a Stanley knife, nothing like that; it was just that he was 100% skinhead: bald, checked shirt with braces under a bomber jacket, jeans that were turned up just above his boots.  He was straight out of the 1970s, or rather, straight out of my family album: much to the amusement of my brother and I my mum used to be a skinhead.  Like everything that happened to your parents before you was born, this has provided hours of laughter for us.

(In the interests of tonsorial equality, I will point out that my dad spent much of the seventies with a white man afro, my brother once dyed his hair the colour of marmalade by mistake, and this very blog is an ongoing catalogue of my battles with a whole series of hairstyles that don't suit me in the slightest.)

At the top of the hill, eureka!  A smutty sign! 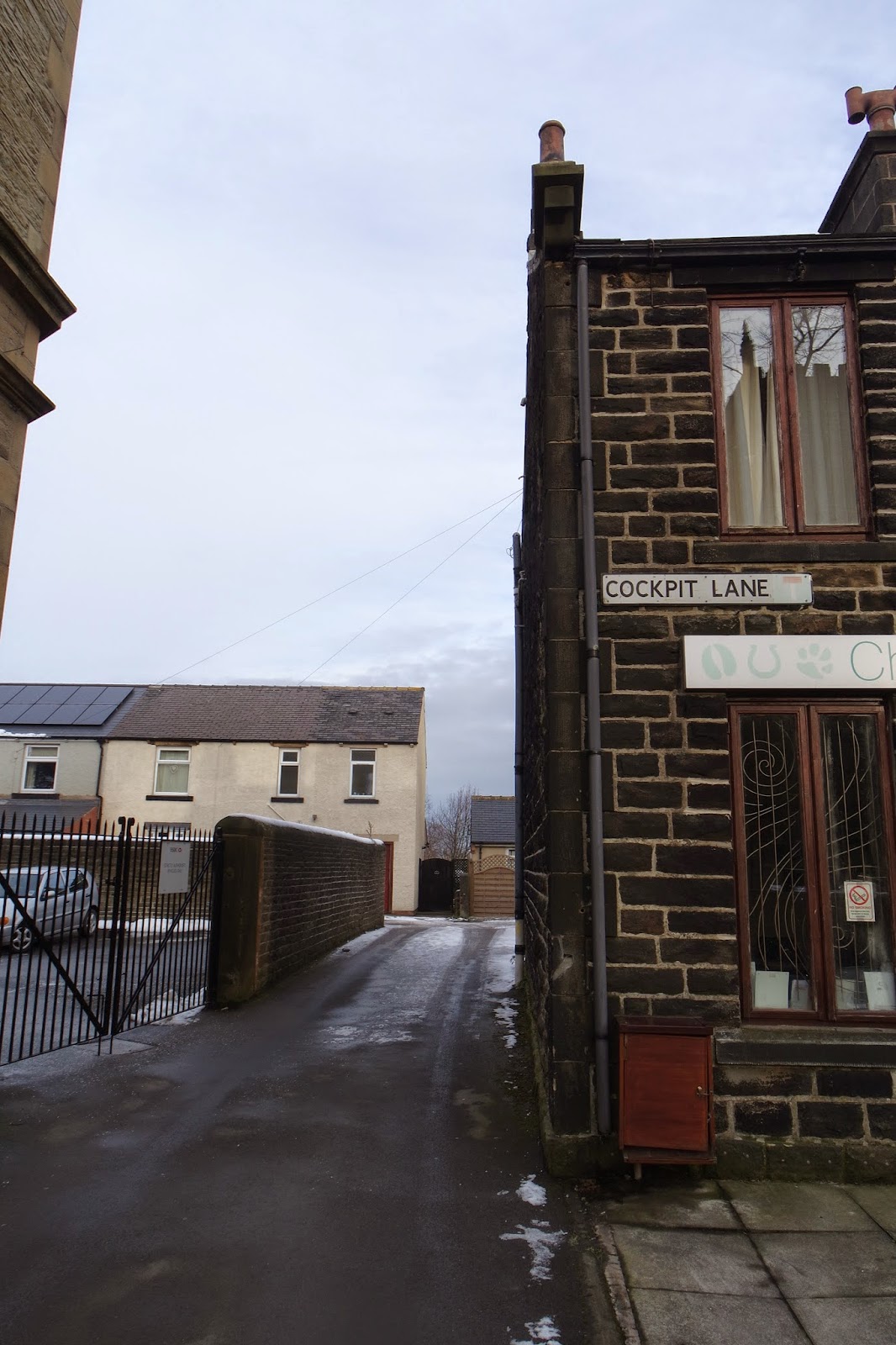 I'd have laughed louder except there was a funeral just arriving at the church over the way. 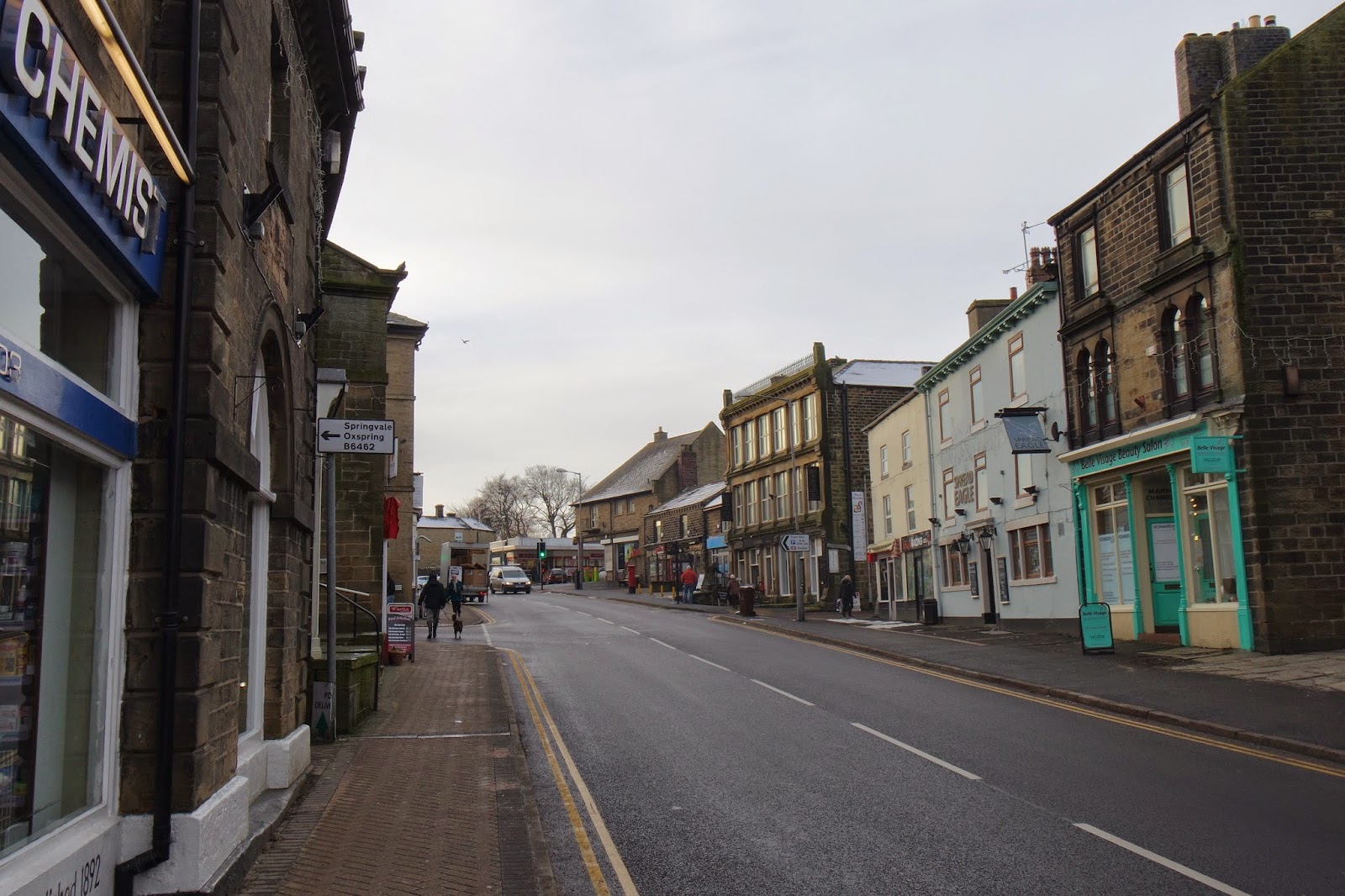 I figured that was as good as it would get for Kenneth Williams-esque blinders so I headed back to the station.  The workmen were still there, now shoveling the snow on the other platform, chatting about their girlfriends all the while.  To hide from the cold, I went into the waiting room, but it smelt like my rabbit's cage when it needed mucking out so instead I sat on the platform and waited for my next train. 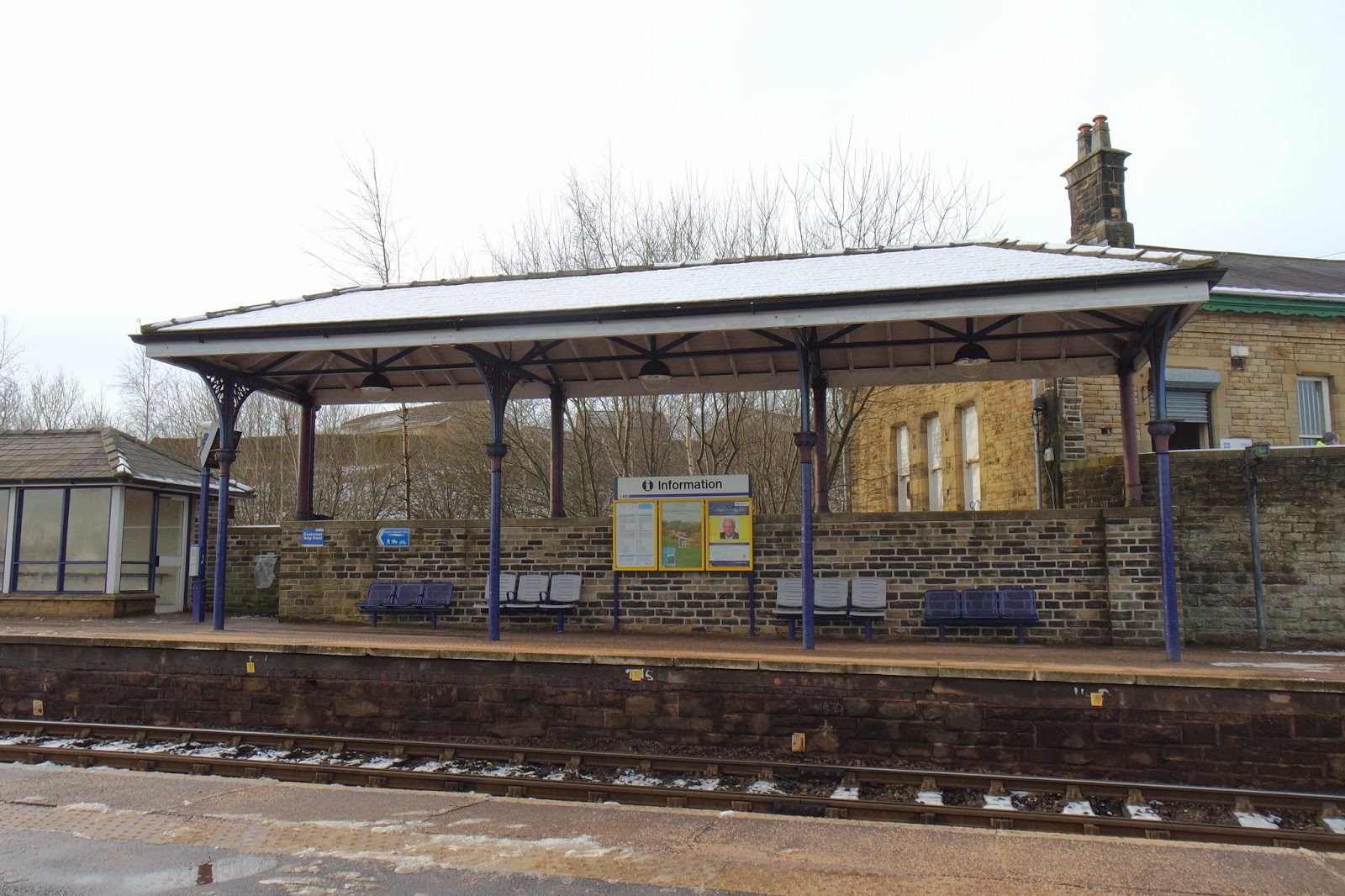 I hoped the train would be a nice smooth modern one, not a rickety Pacer.  There's nothing worse than climbing on board for a ride then bouncing around so much you end up with a sore backside. 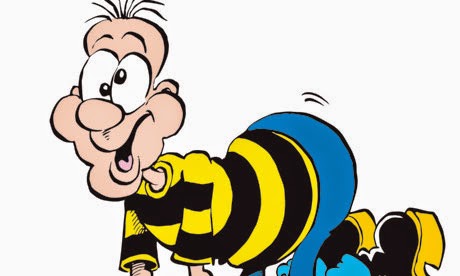 I don't see any jokes in your entry (fnarr fnarr!) about Scunthorpe!

I have very little interest in Scunthorpes.