Jump Back In Time 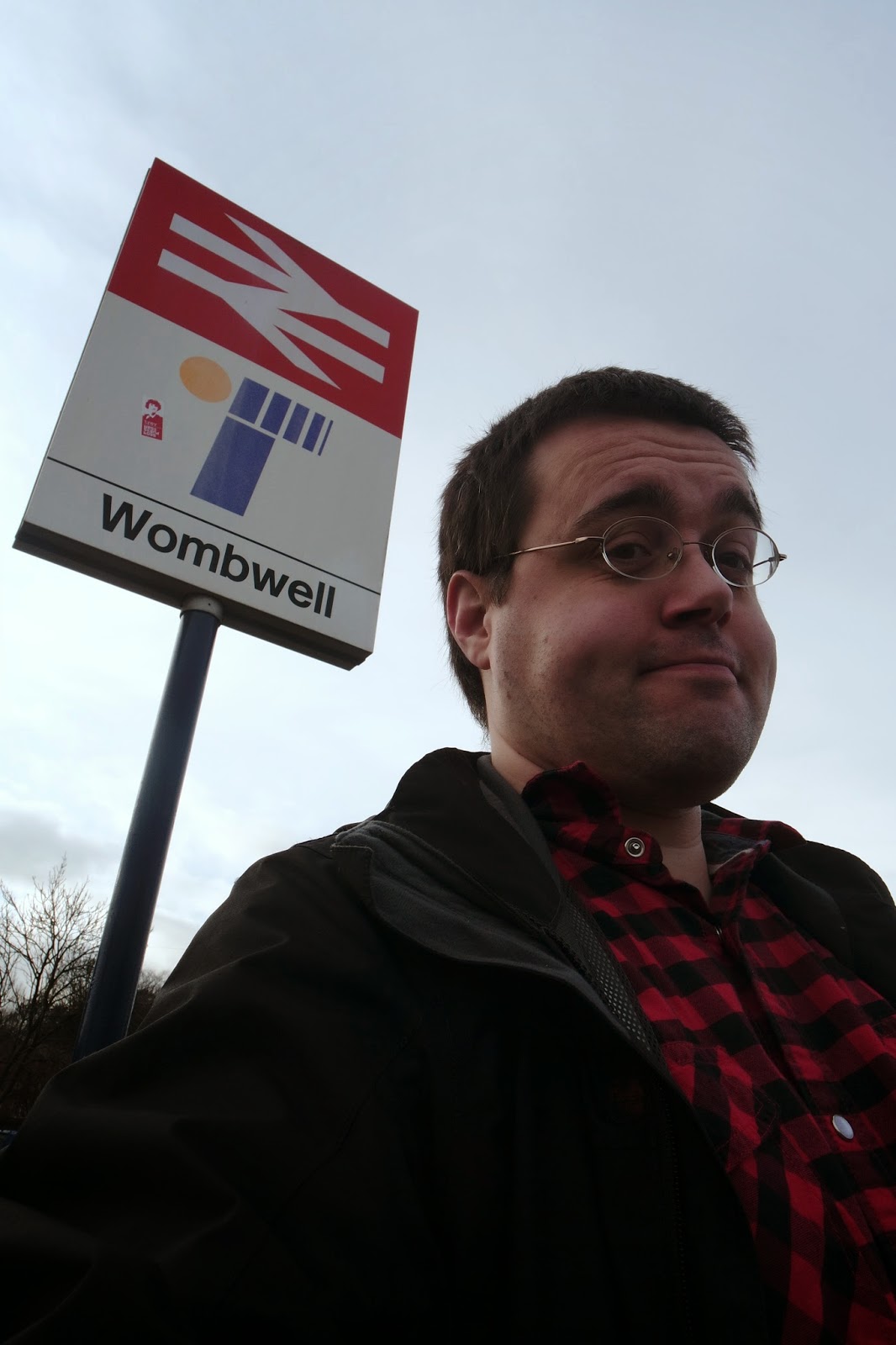 "How dare you!  That's none of your business!"

Still, I suppose after my adventures in Penistone, it was only fair I paid the reproductive organs of the ladies some attention as well. 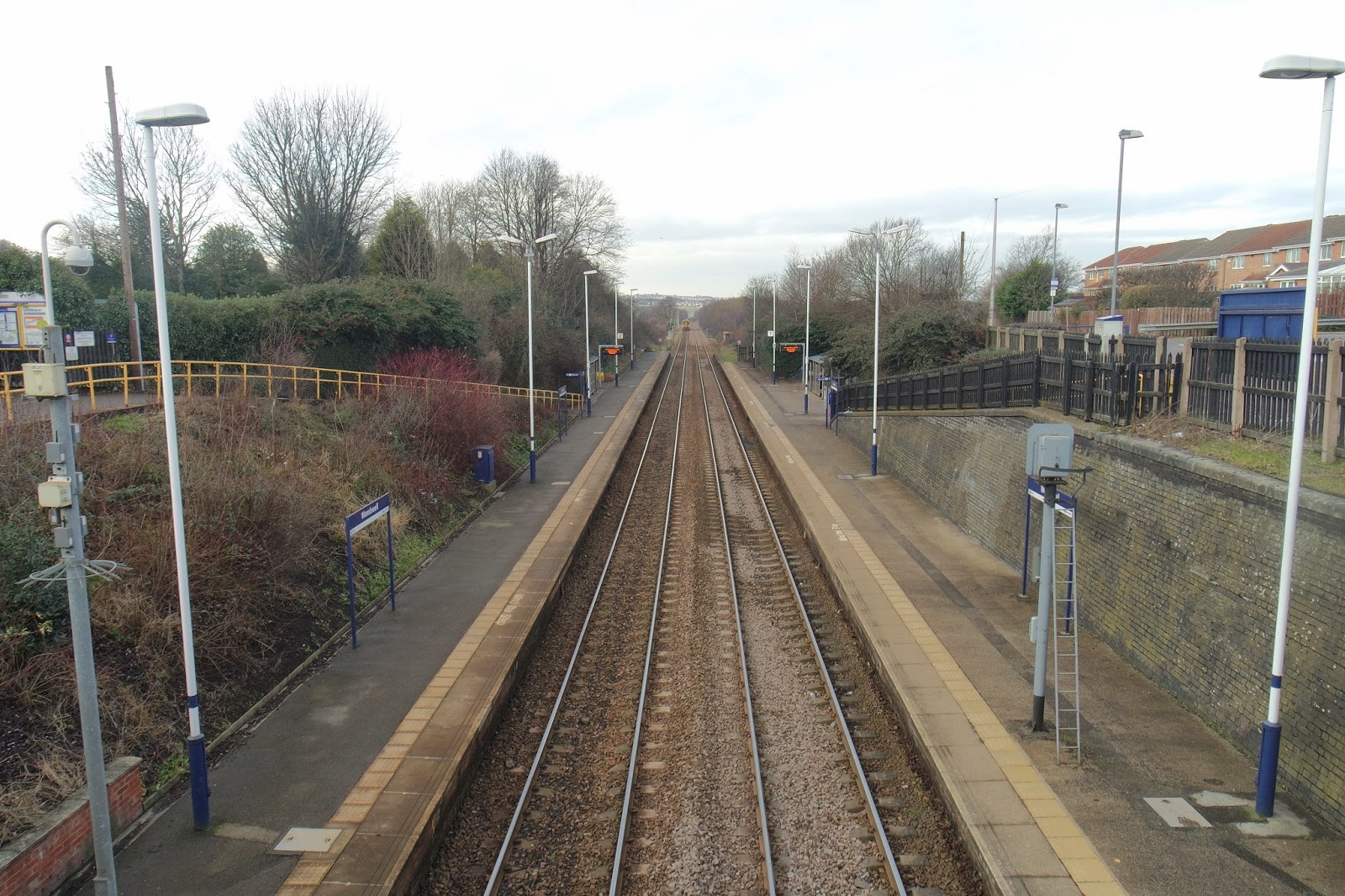 I'd risen up the social scale at Wombwell.  The houses stood well back, with long drives and grass verges at the roadside.  The verges were unsullied by car tracks, the way they are in some places; the people here had double garages they could store their second car in, so they didn't need to churn up the public highway.  Behind the homes the trees of Wombwell Woods swayed in the wind, giving the homes a vaguely fairy tale air. 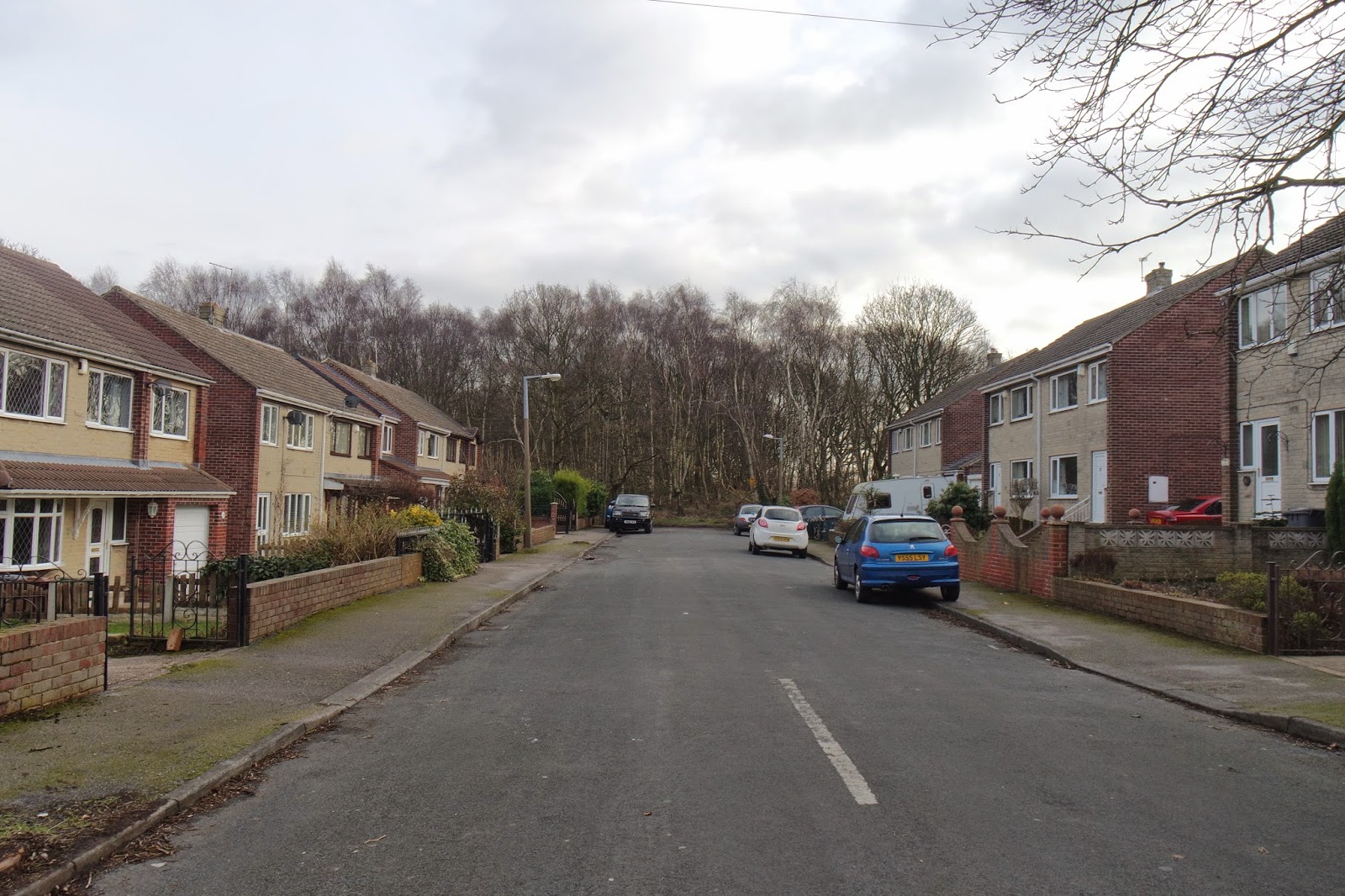 It was exactly the kind of street you could picture children being snatched from and taken off to be murdered in the woods.  If you have a twisted imagination like me.

While the road turned right, I turned left.  I immediately regretted not being in my walking boots. 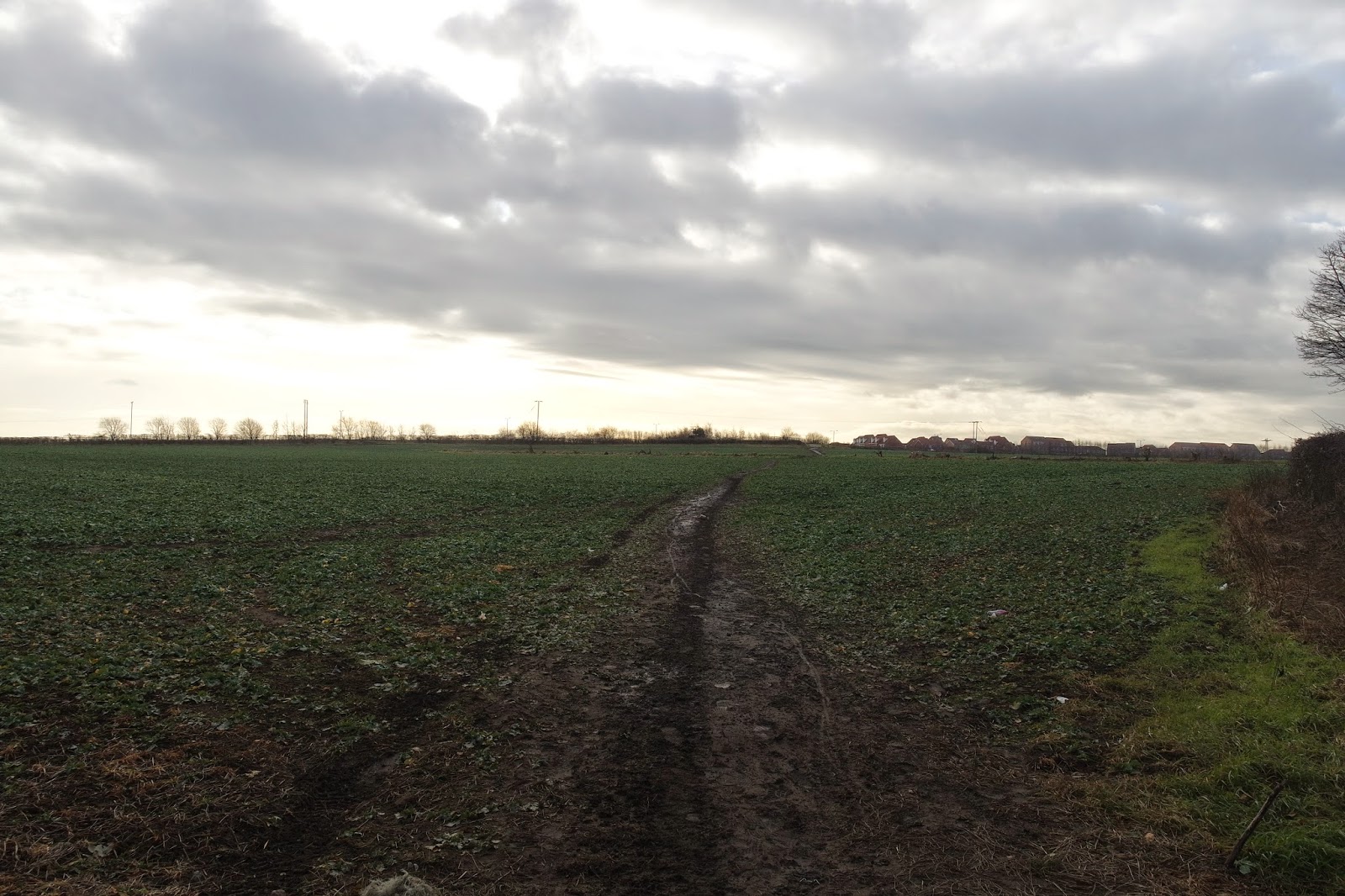 The ground had been sodden and had frozen and then had melted again, leaving the mud sticky and moist.  The surface was like walking on wet clay.  I skidded and slipped, trying to follow the places where it had been churned up - the cycle tracks, the dog paw prints - but most of the time I just minced.  Tiny, delicate steps, quickly placed so I didn't sink, tapping over the field.  I imagined a farmer turning up on a tractor and just watching me with bemusement.

A concrete footbridge over a dual carriageway gave me a moment of firm land - and also a fine view of the local hills - but then it was back to the sludge for a last dash across a field.  Finally I was able to stagger up a slope behind some new houses, where I kicked off the worst of the mud. 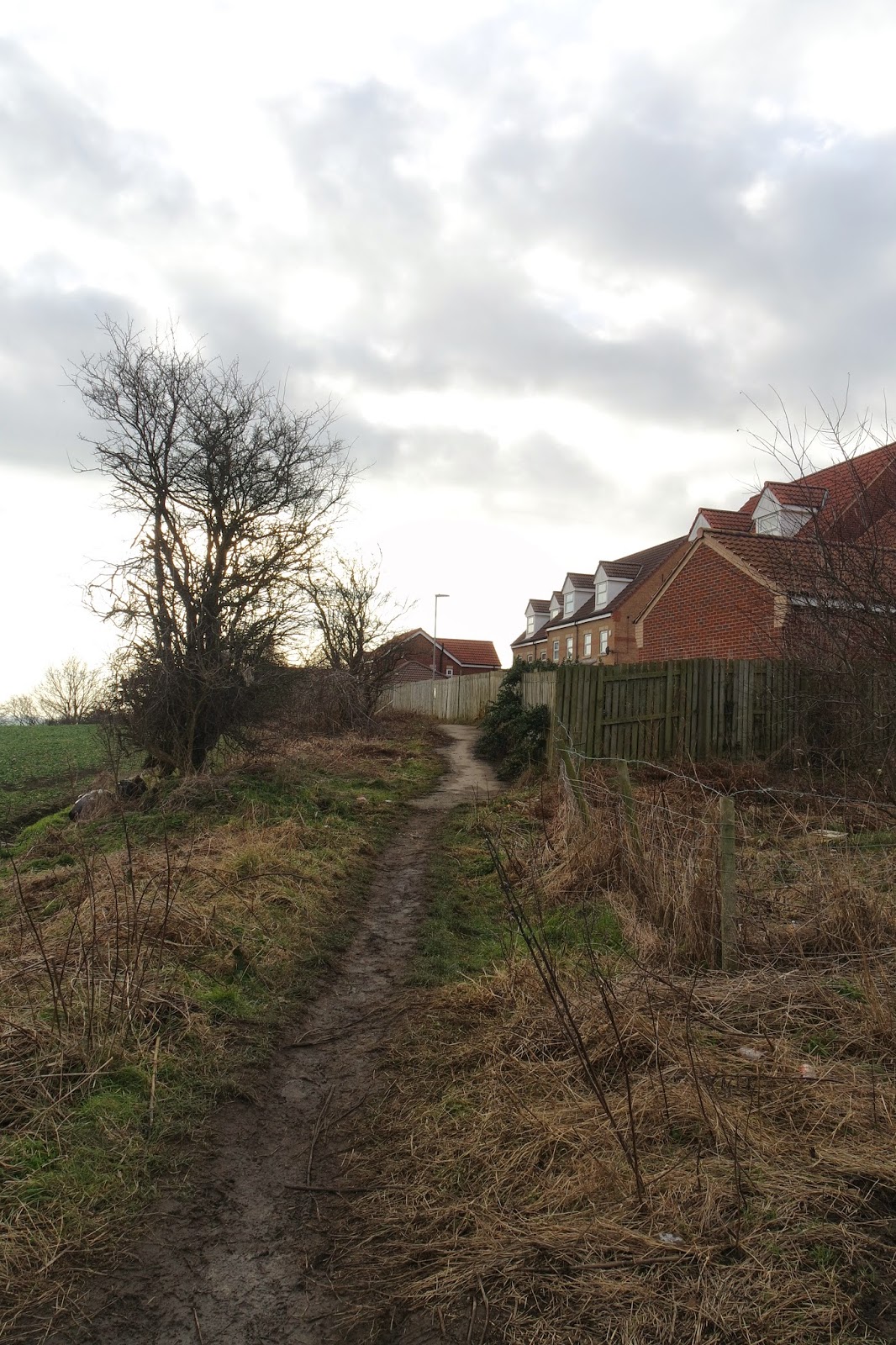 The path continued as an alleyway, before opening up into Jump Park.  That's not a local council trying to get its citizens healthy and active with an exercise yard; I was actually in the village of Jump.  Obviously that goes straight into my top ten of placenames.  How lovely it must be to say "I live in Jump."  The only way it would be better would be if there was an exclamation mark at the end: Jump!  Why should Westward Ho! get all the plaudits for having punctuation in its name.  The residents should start a petition. 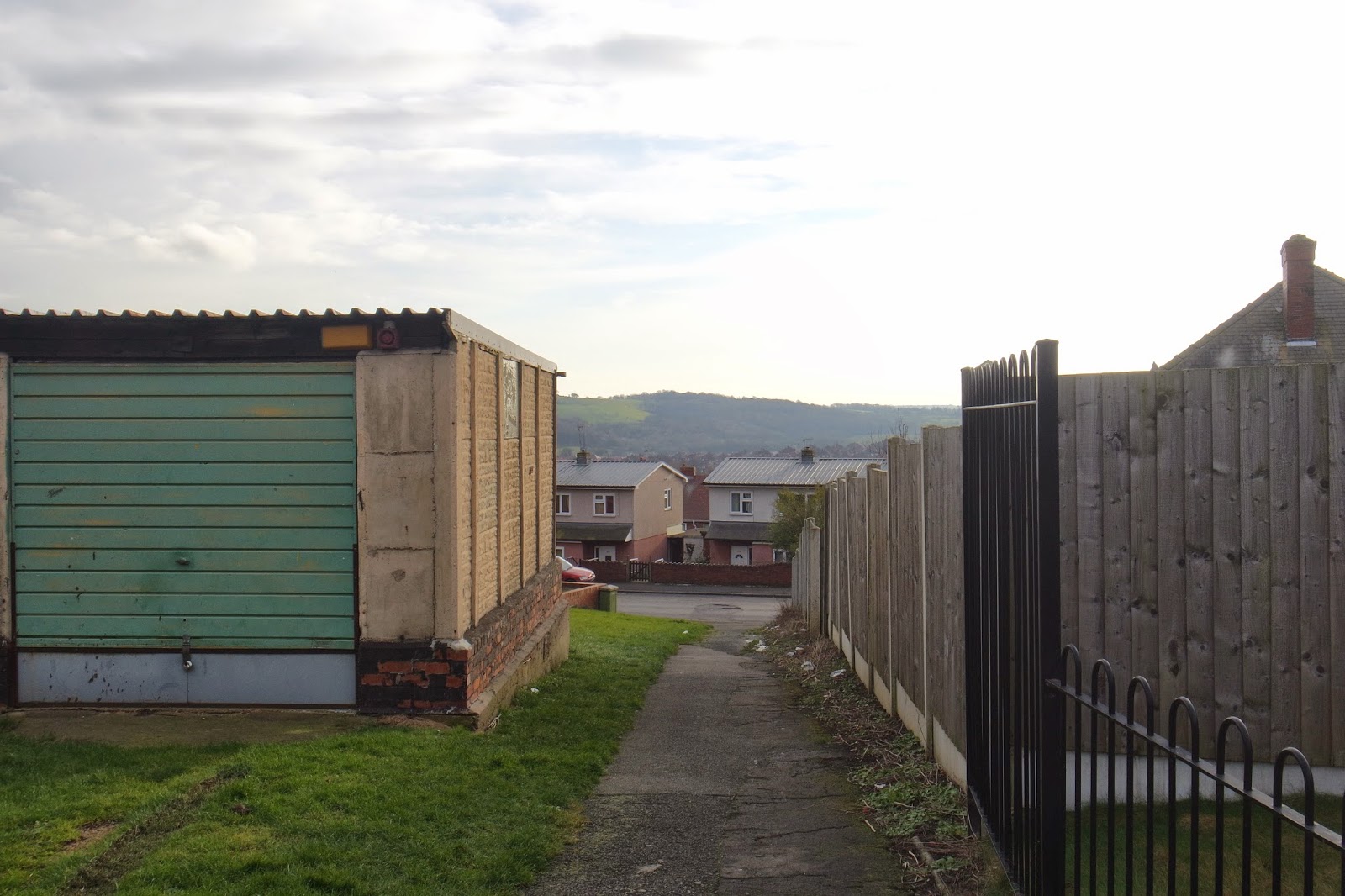 Walking around, though, I soon realised that the residents of Jump had more important things on their mind.  It was a sad, downtrodden place.  Terraces of old houses with broken windows.  The remnants of a bus stop, reduced to its footings.  A relatively new row of townhouses had patches of grass out front that were little more than rubbish tips.  Some of it came from the houses themselves - boxes for a new stereo, the remnants of Christmas decorations - but most of it was litter kicked into the yards from the street.  I couldn't help noticing the high number of cheap beer cans. 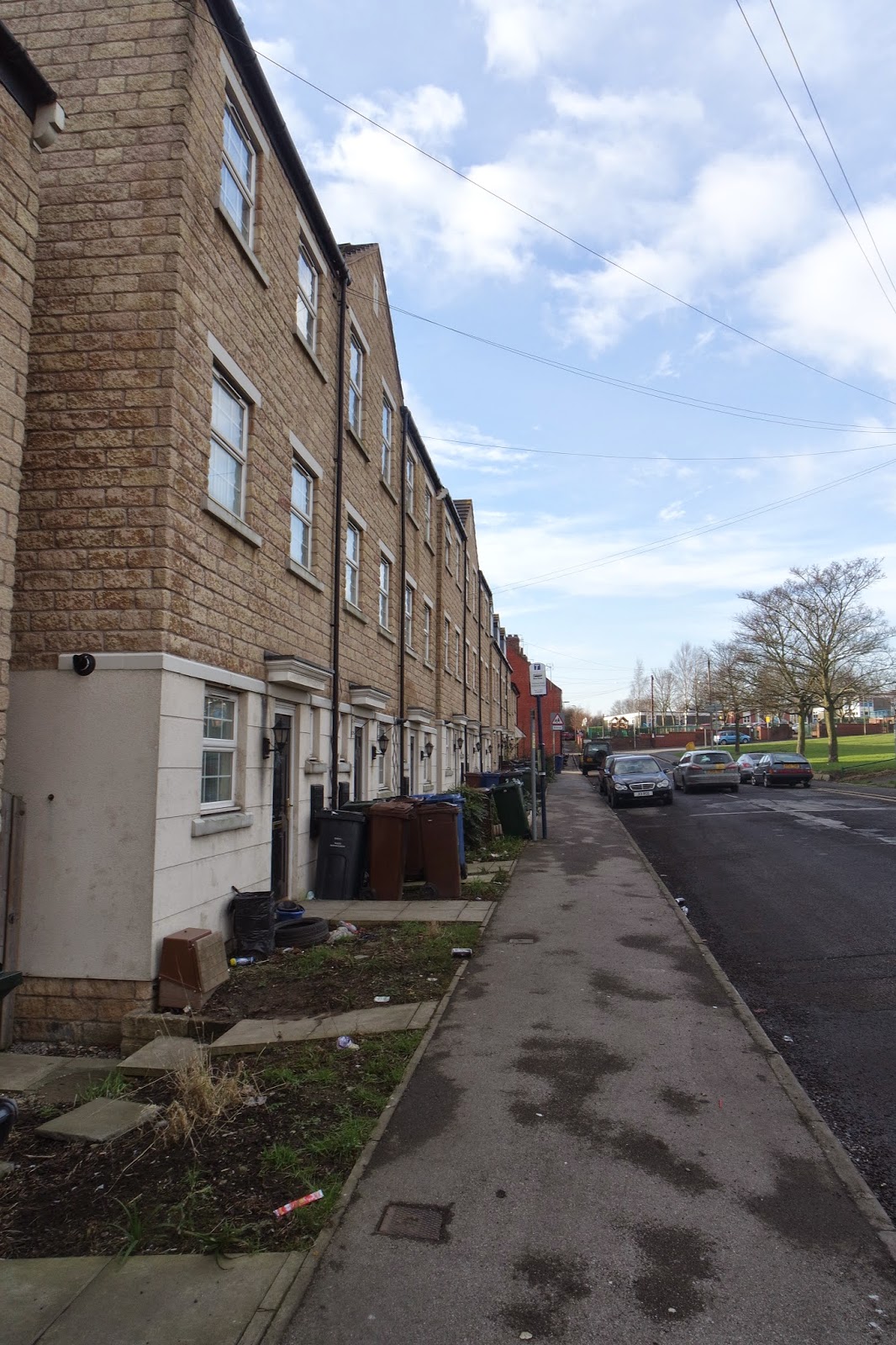 I headed down the hill by the Flying Dutchman pub, its chalkboard still wishing us Merry Christmas and a Happy New Year, and past a brand new Sure Start Centre.  It was surrounded by high razor wire, giving the impression that the children inside were in some way feral.

It brought to mind the great Yorkshire poet, Jarvis Cocker.  As I left Jump, heading into the countryside that separates it from its neighbour at Elsecar, the words of Common People popped into my head:


You'll never watch your life slide out of view

And dance, and drink, and screw

Because there's nothing else to do

What else was there to do for a teenager in Jump besides sit at a bus stop necking budget lager?  There wasn't an easy way out.  I imagined it could be a horribly lonely and isolated place. 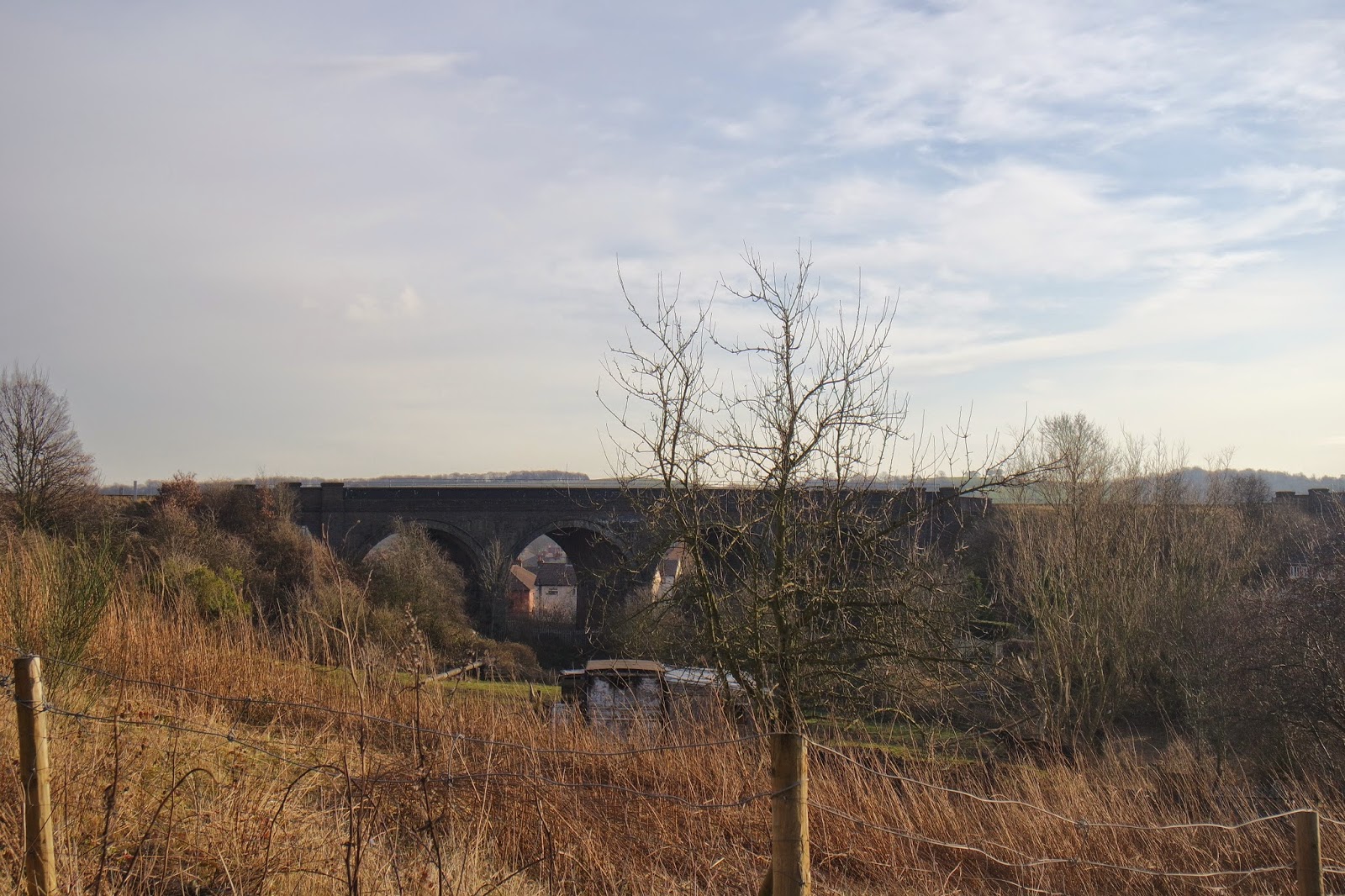 I headed further into the valley, then under the viaduct and into Elsecar.  I had nearly an hour until my next train so I decided to take a circuitous route instead of heading straight to the station.  I walked through some of the quietest streets I have ever known.  There were no cars, no people, no sound.  The only noise was me (my trainers had developed an irritating squeak).  I didn't see a soul.  It was eerie. 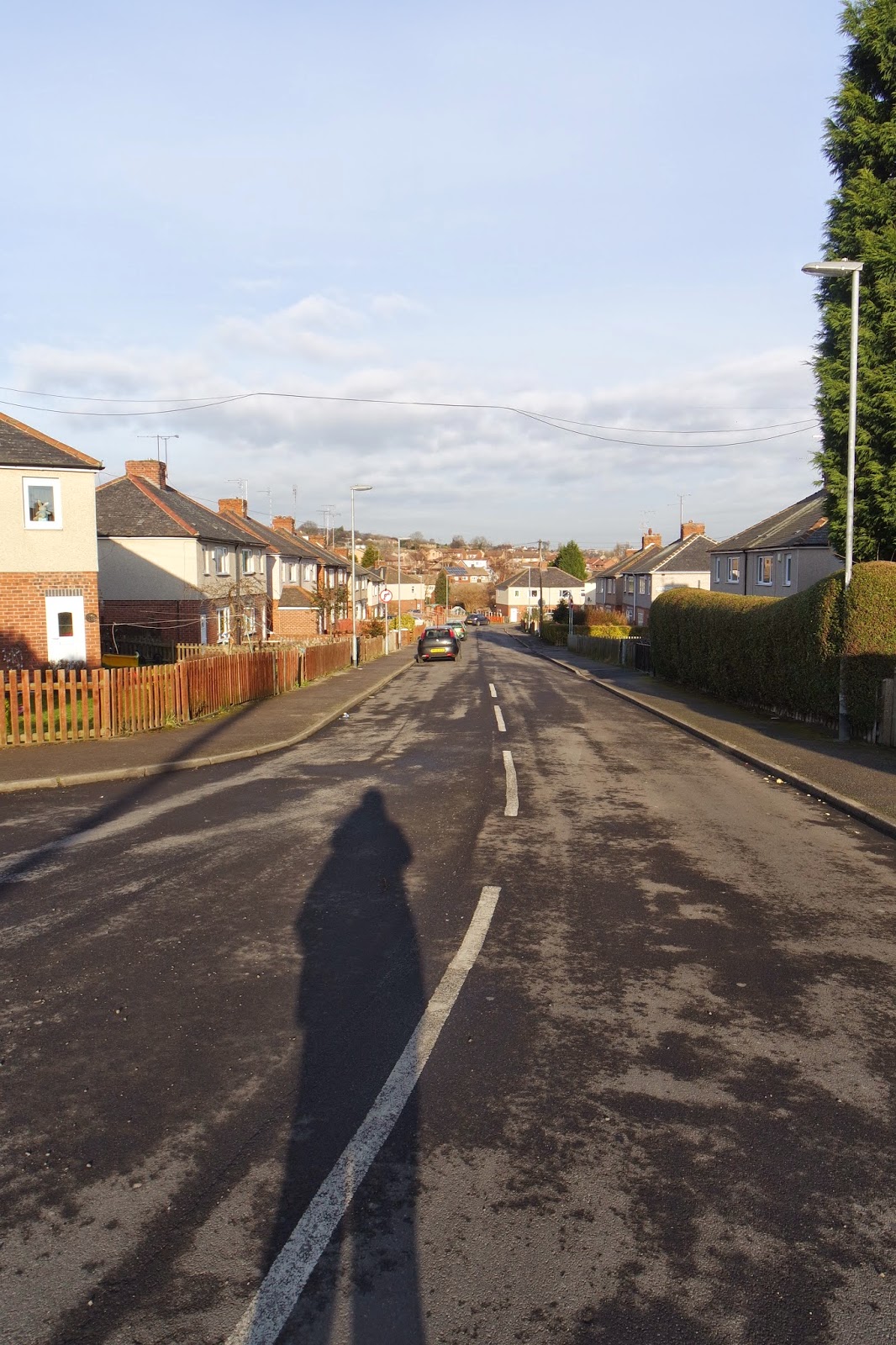 I was almost deliriously happy to reach the main road and see actual traffic.  Elsecar was, like most places in this part of the world, a mining village, and down by the River Dearne there were Victorian terraces and workshops.  Now they were extremely desirable, despite the busy road outside; the gardens here were well tended to and neat, unlike their Jump counterparts.  The only objects scattered over their lawns were garden ornaments. 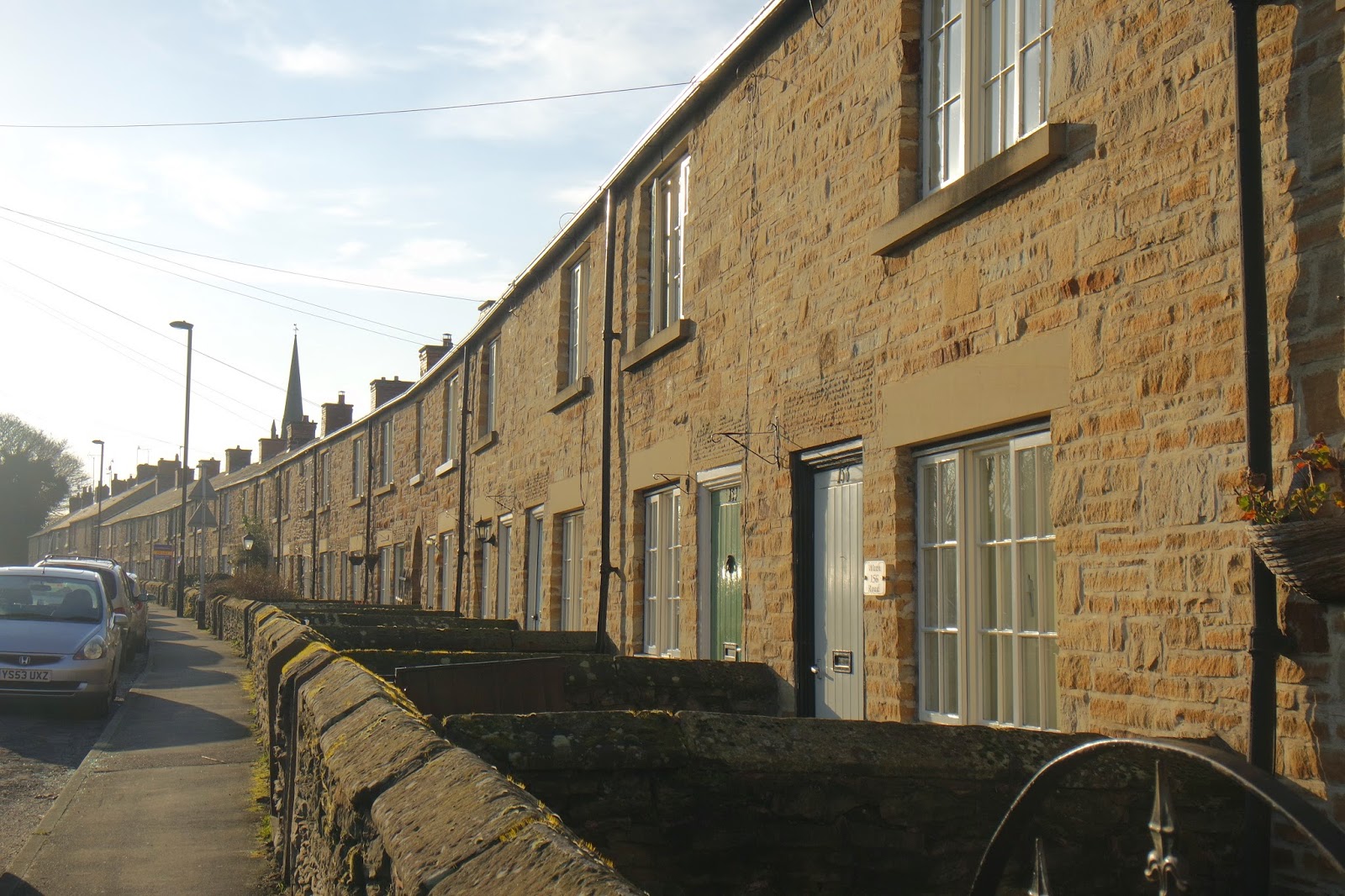 There were larger homes, plus a pub that had been converted into flats: it still had the Saloon stained glass over the door.  A woman came out of the building to get into her Land Rover and, even though I was a good six feet away, I could smell her incredibly strong perfume.  The inside of her car must have been like a gas chamber.

Elsecar's sexy and it knows it.  The industry has been replaced with tourism because it's such a pretty example of a Yorkshire mining village.  It's the cleaned up, polite version of course; no-one wants to see filth in the streets or children with rickets, but it's the sort of place that would turn up in an inspiring Sunday afternoon film.  One where the grumpy but old-fashioned mine worker - with a moustache and a flat cap - finally acknowledges his son's desire to move to That London and get a fancy university education with a hard-pressed smile.  Then they sing a Lionel Bart song, and the people in the street outside do a dance with their thumbs jammed in their braces.  Or something. 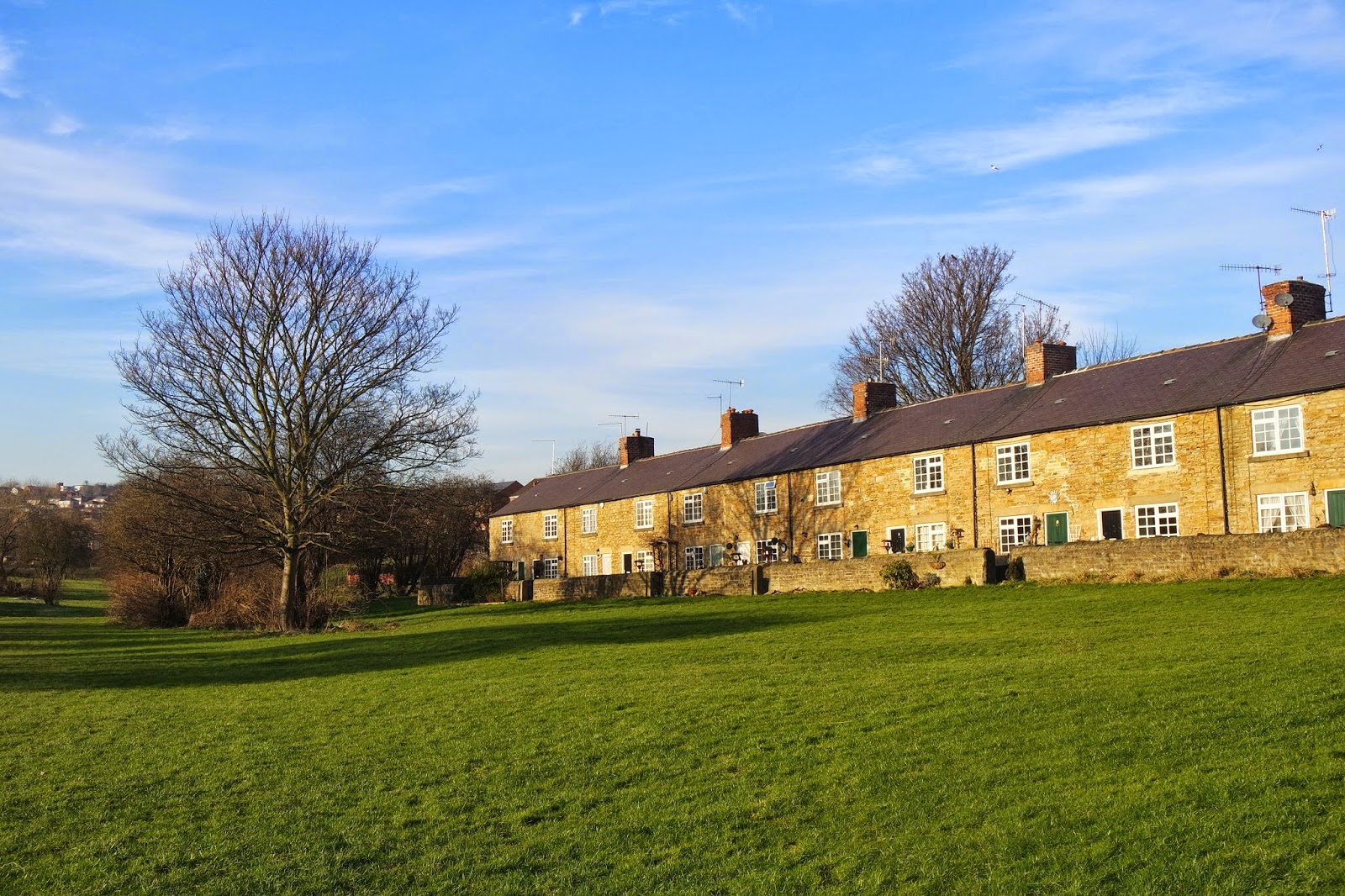 I walked past the church, which featured some frankly terrifying Victorian angel statues (damn you Moffat!) and down towards the Elsecar Heritage Centre.  The former ironworks have been turned into a visitor attraction.  Note that I say "visitor attraction" rather than actually describing what it is, because to be honest, I couldn't quite work it out.  There was a courtyard with a little cafe, as you'd expect, but then there were a load of shops.  They were artsy, crafty shops, yes - interior designers and antique dealers and places selling charming little tchotchkes - but they weren't exactly destination stores. 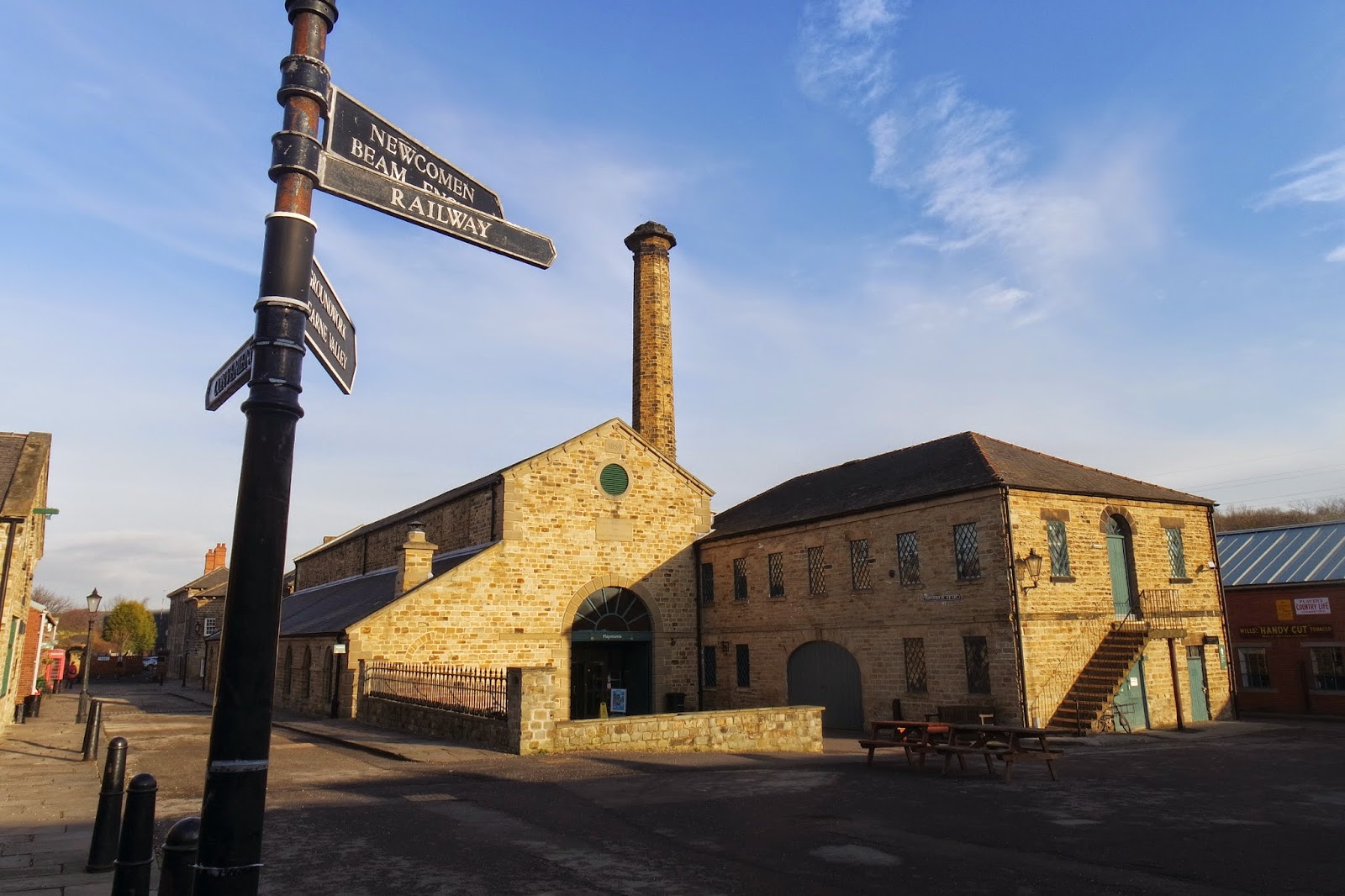 It was, basically, somewhere to go of a Sunday afternoon.  It didn't really have any reason to exist rather than there were some nice old buildings no-one wanted to see go to waste and there are a lot of desperate parents out there looking for something to do with their kids at the weekend.  On a weekday it was deserted. 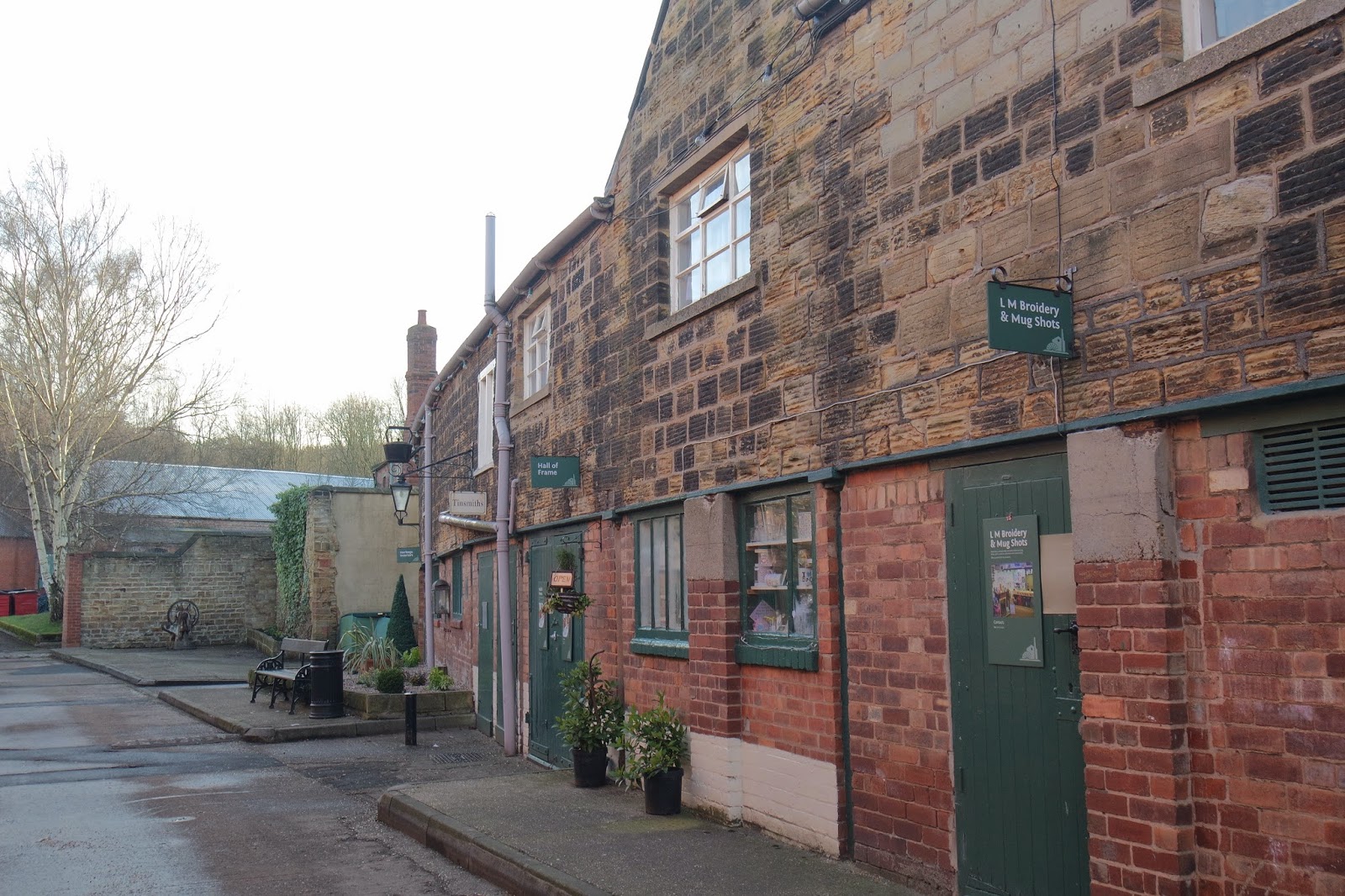 Its main selling point is the Elsecar Heritage Railway, a preserved steam line that runs from the centre.  I walked round to the back and found a lovely clapboard station, with preserved engines and carriages waiting alongside.  Someone, somewhere, was working on an engine, and I could smell the smoke. 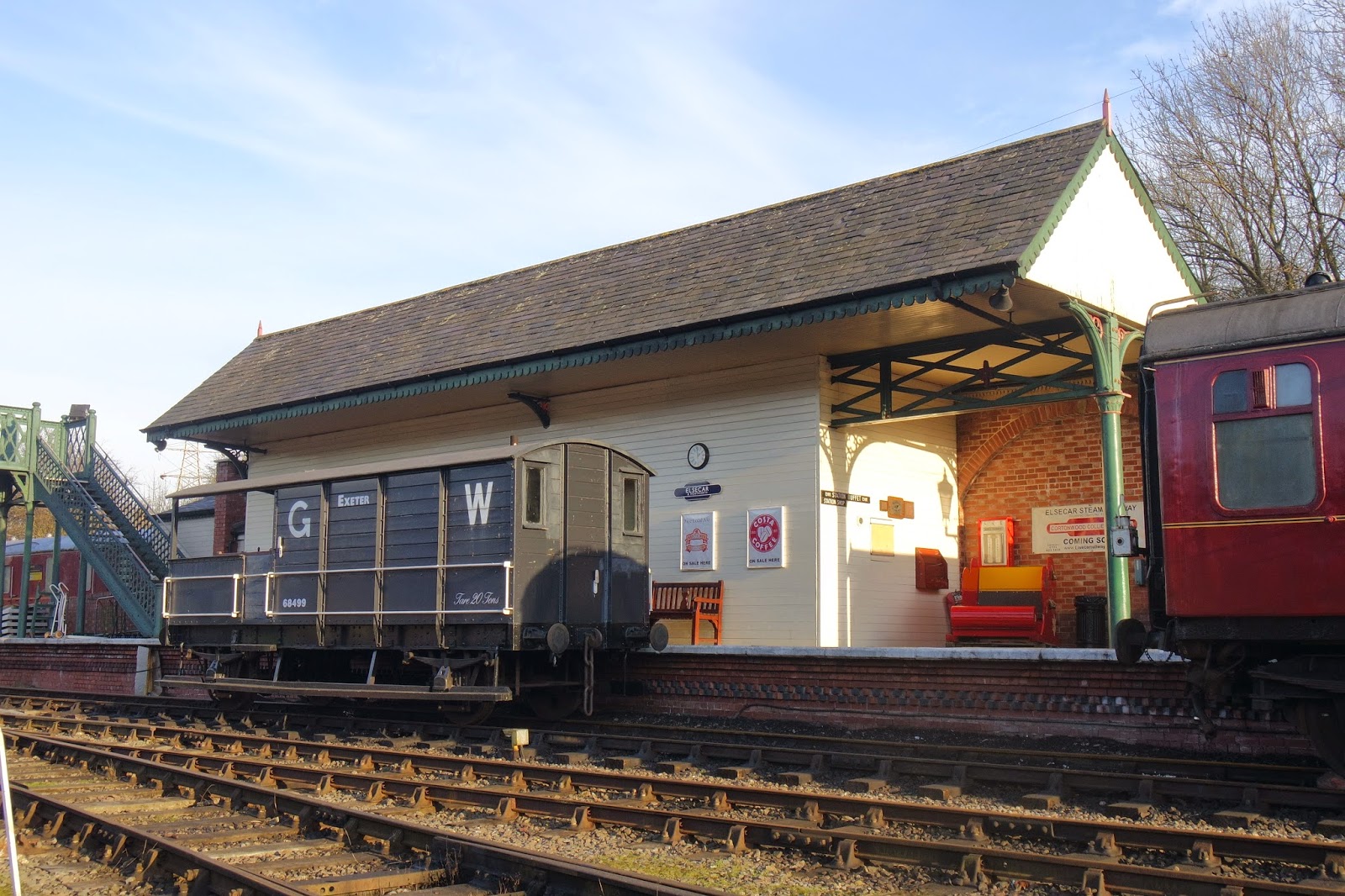 At the moment, the line is a cul-de-sac.  Trains can run as far as the Hemingfield basin, then they have to reverse and come back again without passengers getting the chance to alight.  They've recently raised enough money to construct an extension and a new halt, to make it into more of an experience. 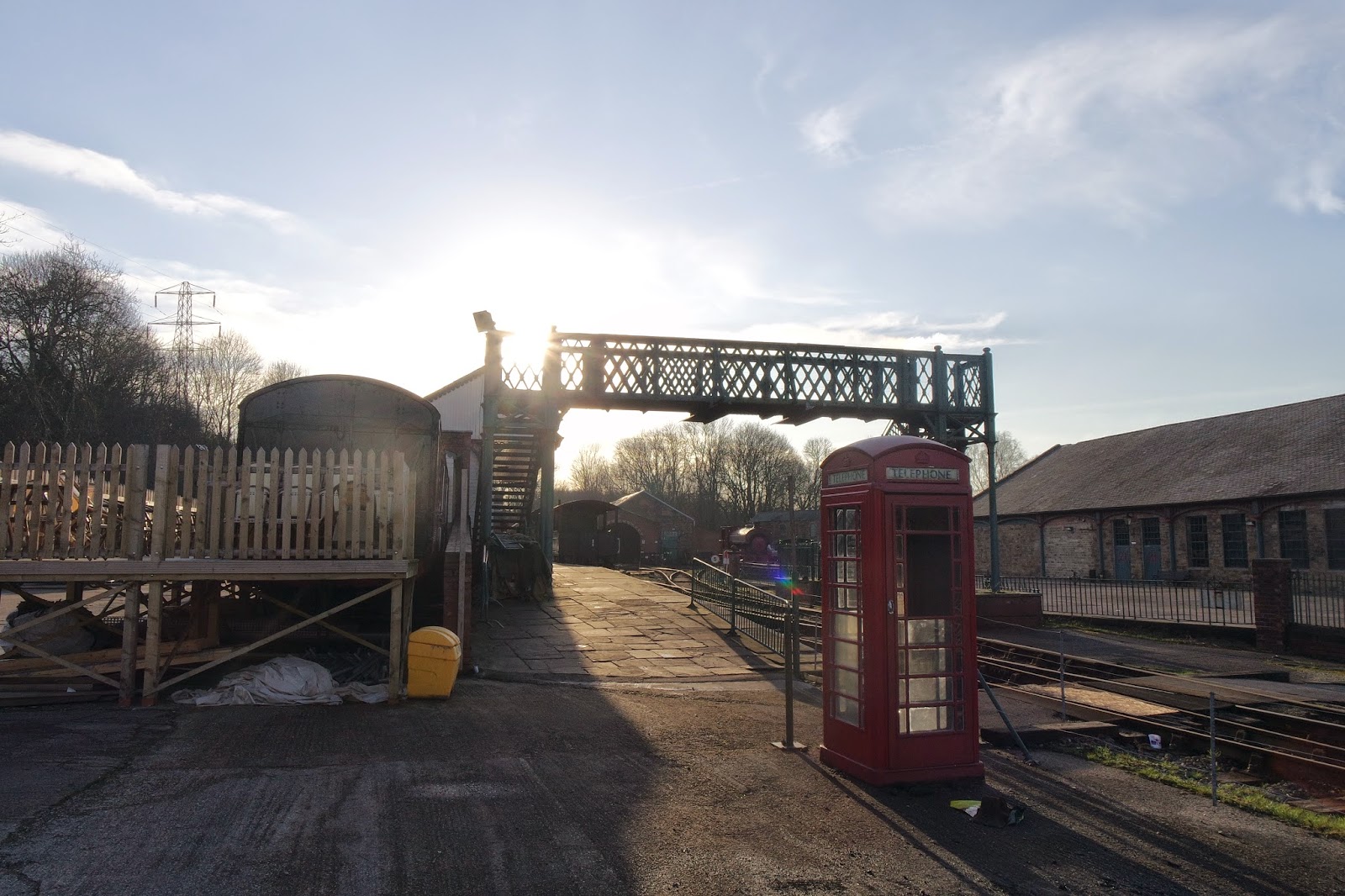 There was a museum carriage, too, but I didn't have time to visit it.  My leisurely strolls meant that I now had only fifteen minutes until my train left, and I still had to get up the hill to reach it.  I had just enough time to do one thing: 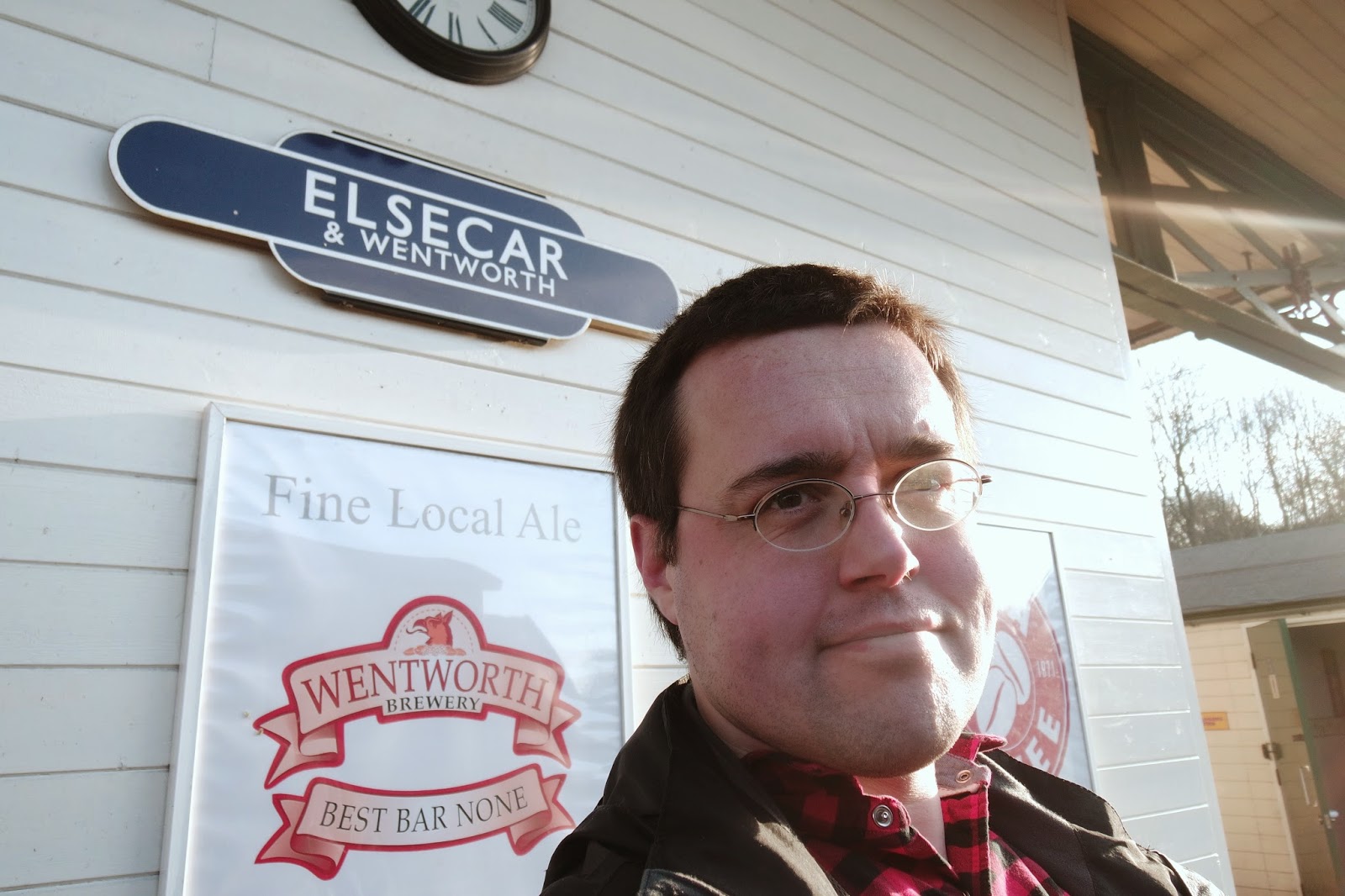 I did also have time to stop outside the pub by the heritage centre and take a photo of one of the most wonderfully naff pub signs I have ever seen: 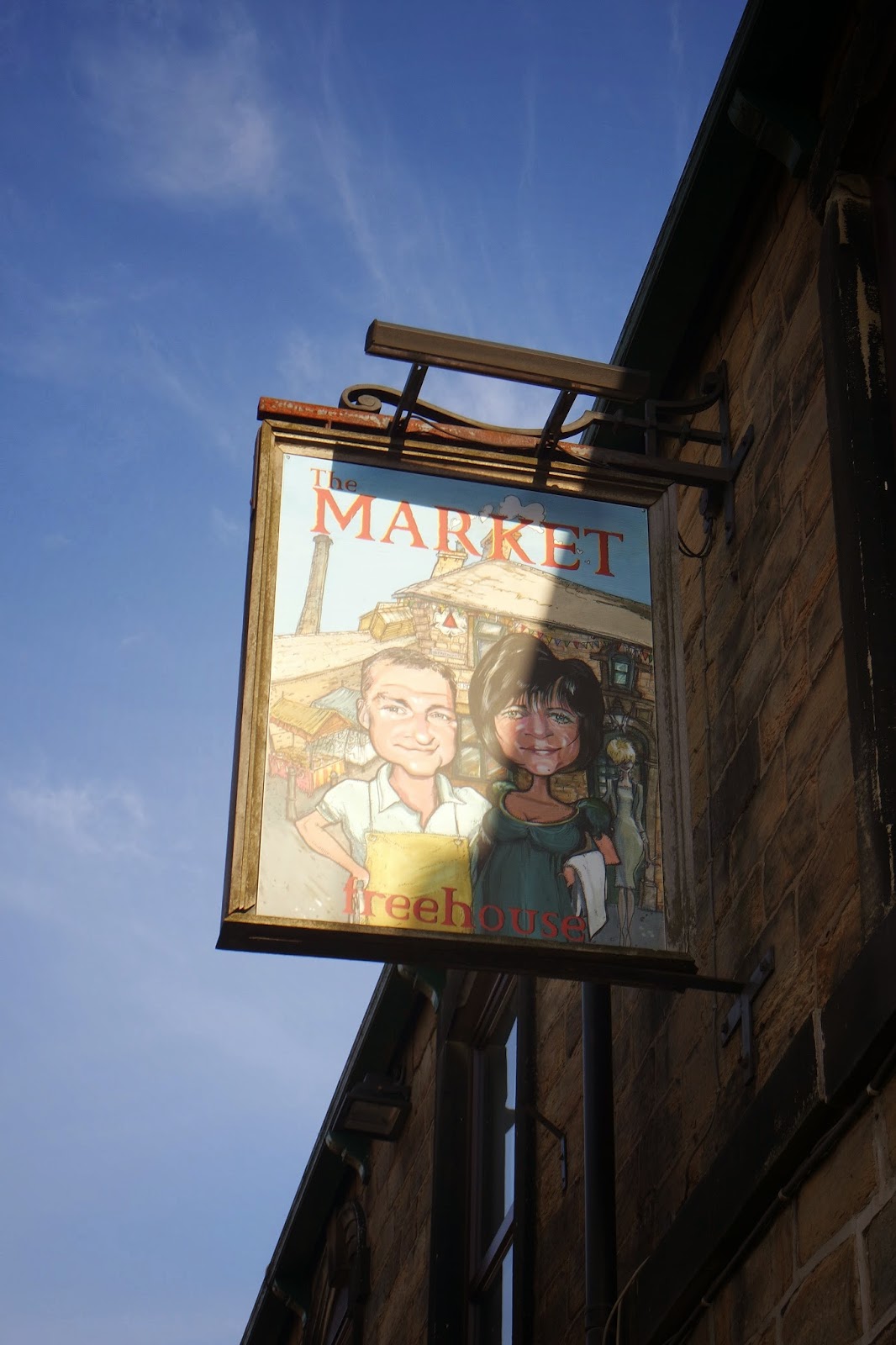 I sincerely hope the landlady was pregnant when they painted that, otherwise I'd want my money back.

I passed an old garage, still advertising Austin Morris cars and flying a tattered Union Jack, then pushed up the hill towards the station.  This part of the village was less scenic, but still seemed like a good place to live.  There was a tiny cafe, the Cottage Kitchen, with a poster saying Pea and pies served TONIGHT!, and a couple of solid pubs named after dignitaries. 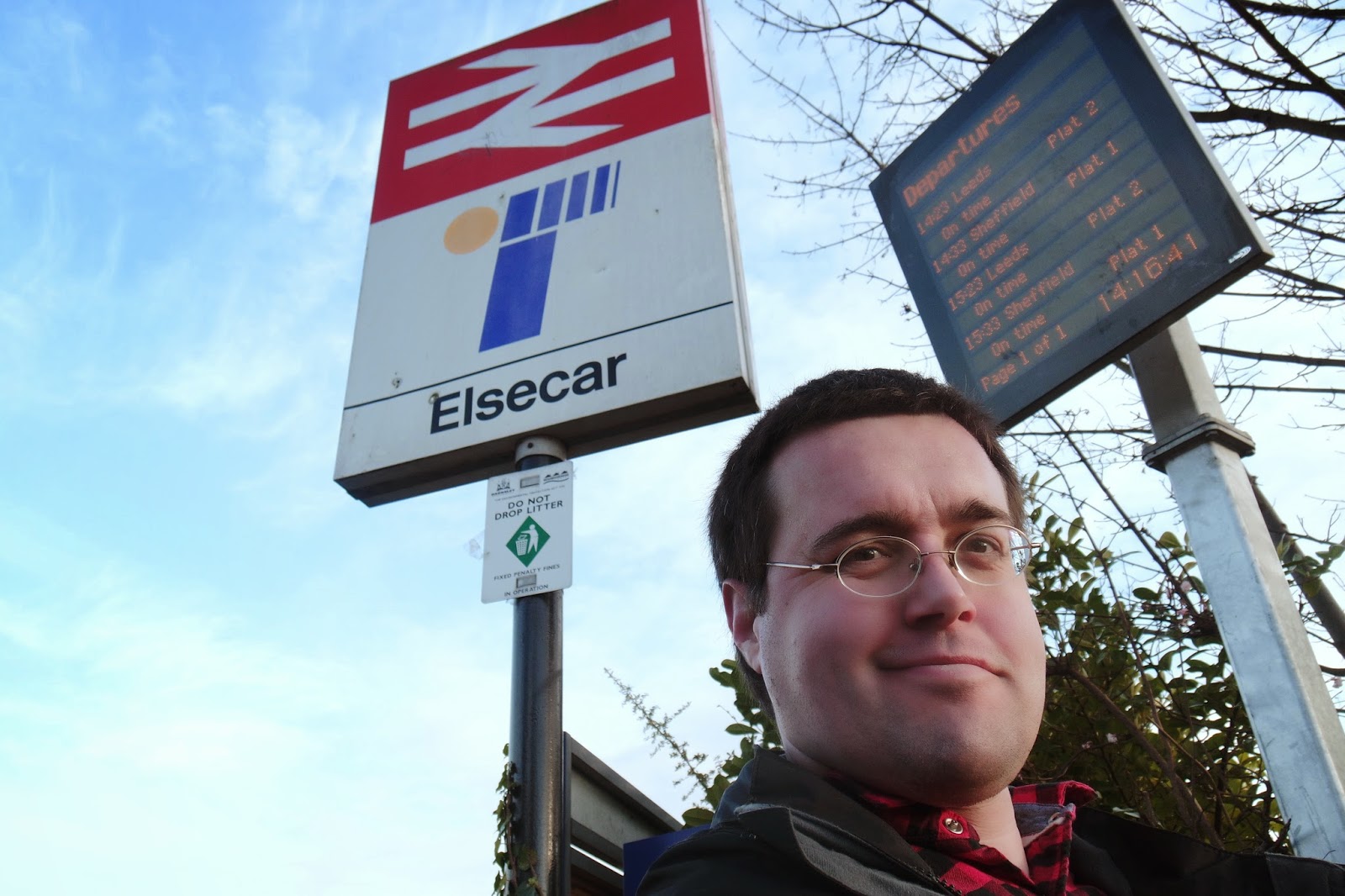 Elsecar station used to have a ticket office, but it was closed a long time ago.  The building remains, decaying, the goods yard turned into a builder's merchant.  Decisions about what is and isn't worth preserving on the railway sometimes seem so unfair. 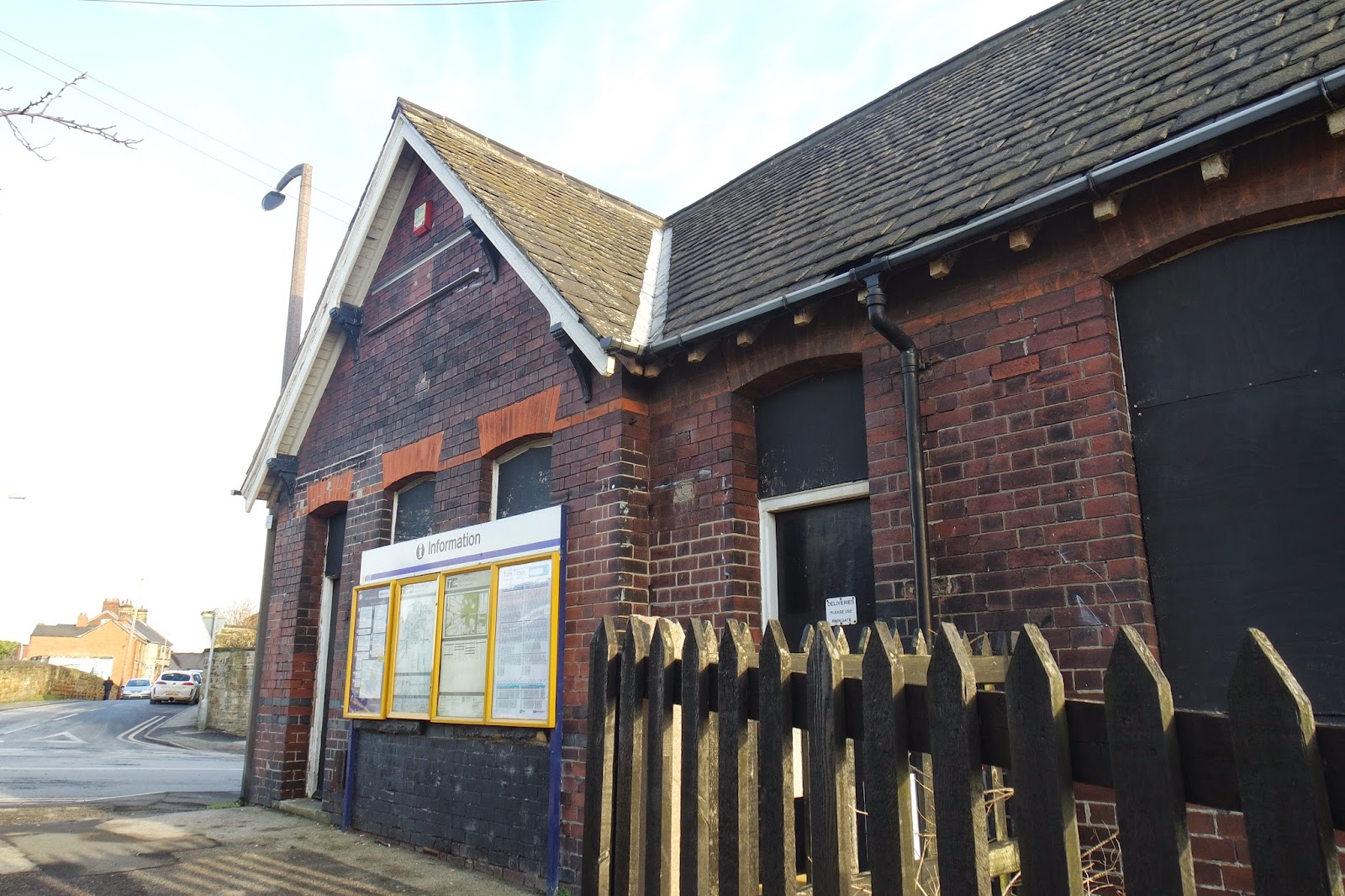 At the platform level the station had been refurbished and modernised, with plenty of ramps for the disabled and bike racks and electronic notice boards.  The tannoy system was in full flow.  Someone at Northern - and if I ever find out who it is, I'll kick them to death while wearing football boots - has decided that just having safety announcements isn't enough.  That's boring.  There are the terrifying children making announcements that I recoiled from at Marsden a few weeks ago, but even when it's a grown up it's no less irritating. 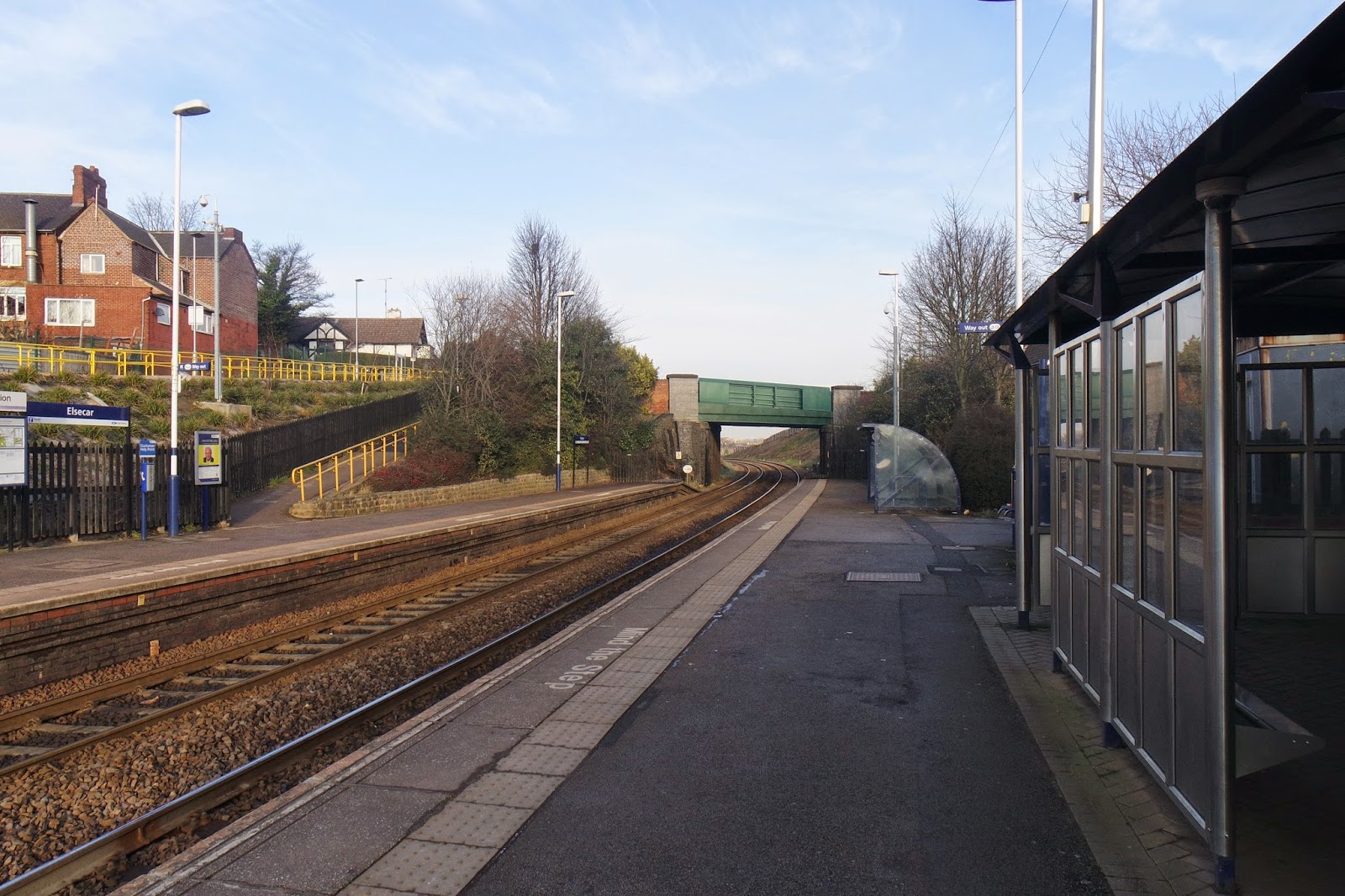 Earlier, at Barnsley, I'd heard "Any unattended items will be removed and possibly destroyed - no matter how nice they are!"  Now I got "Ooh, smile!" - the oooh pronounced in a way Barbara Windsor would have deemed over the top - "You're on camera!" , followed by the actual legally mandated notification about CCTV.  Worse was "Mind the gap between the platform and the train.  This is not a place you'd want to visit!"  That one doesn't even work. 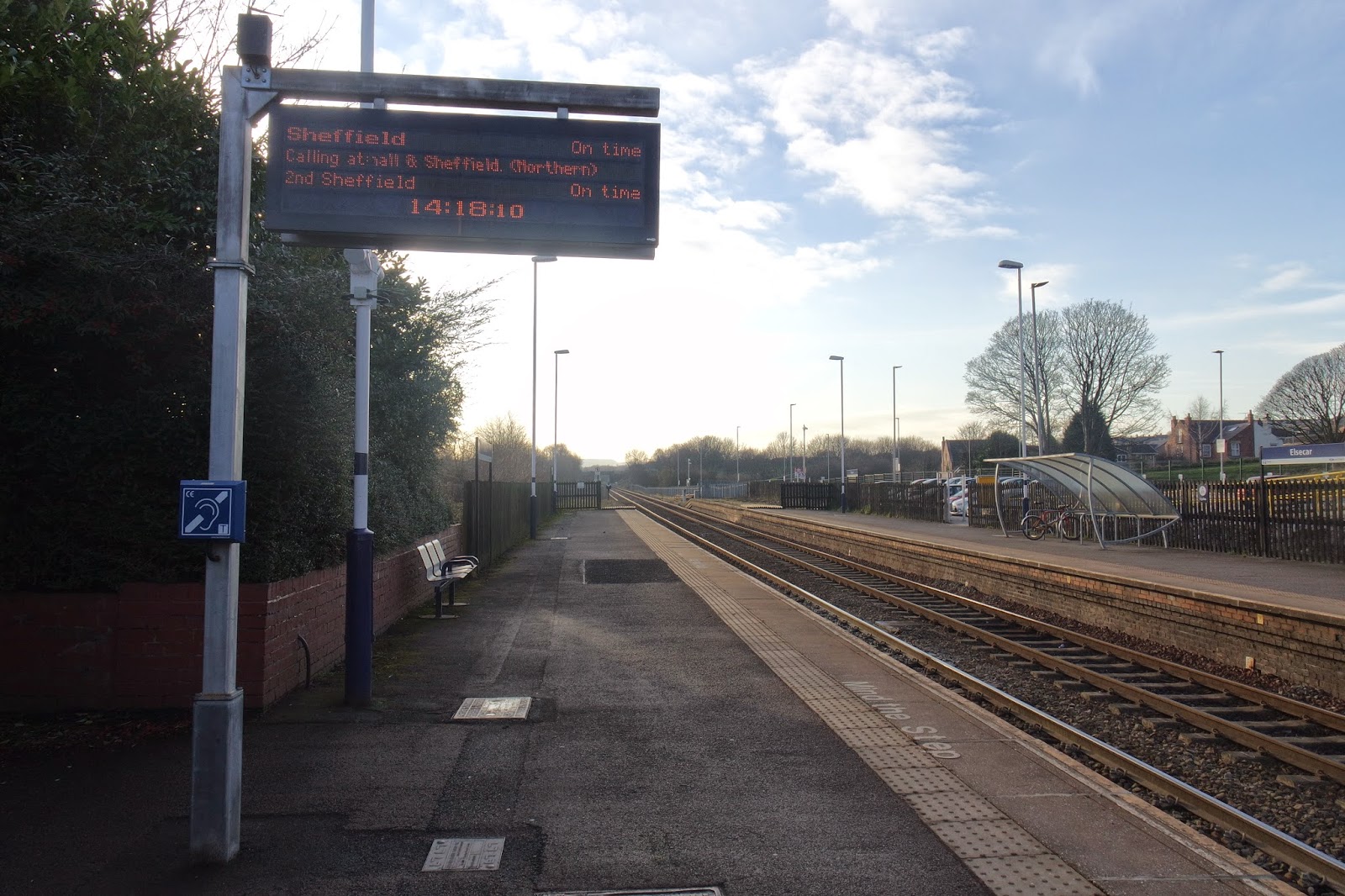 Stop it now.  This comes under the same category as smoothies that describe their ingredients as "yummy strawberries" and comedy menus.  Treat us like adults.  If you want to write a sitcom, go off and do it; Carla Lane's had loads on telly, so it can't be that difficult.  Leave our safety announcements and our information boards unvarnished and ordinary.  I was ecstatic when the train arrived and I no longer had to listen to the endless mithering. 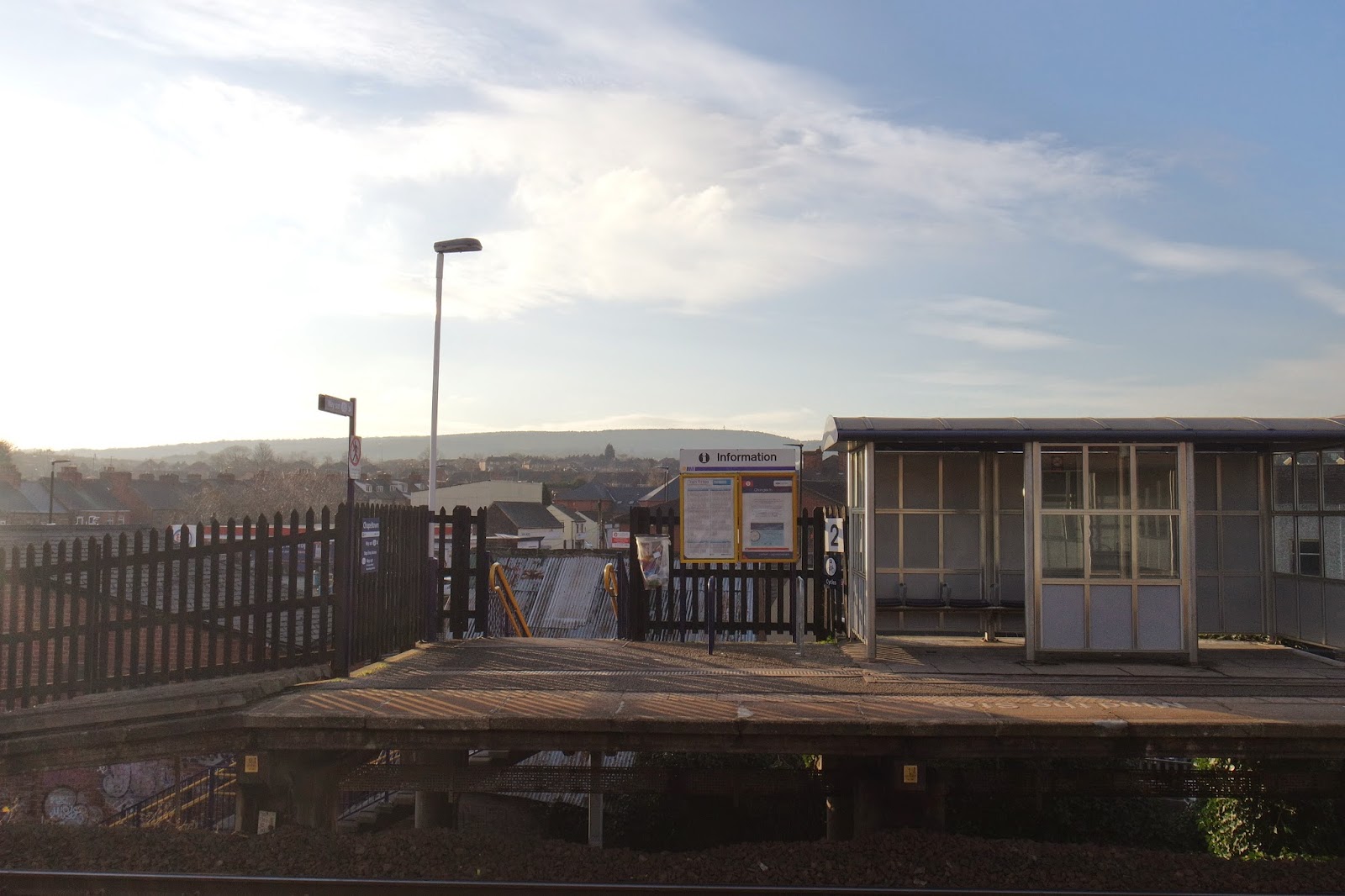 Chapeltown was my final stop for the day, and it felt like I'd reached the city.  Though it's technically a town in its own right, separated from Sheffield by countryside, it seemed like I'd hit the suburbs.  There was an Asda superstore and semi-detached homes stretching into the distance.  Down at street level, I found a small shopping precinct and a busy roundabout.  I also found this sign on the railway bridge, which I loved: 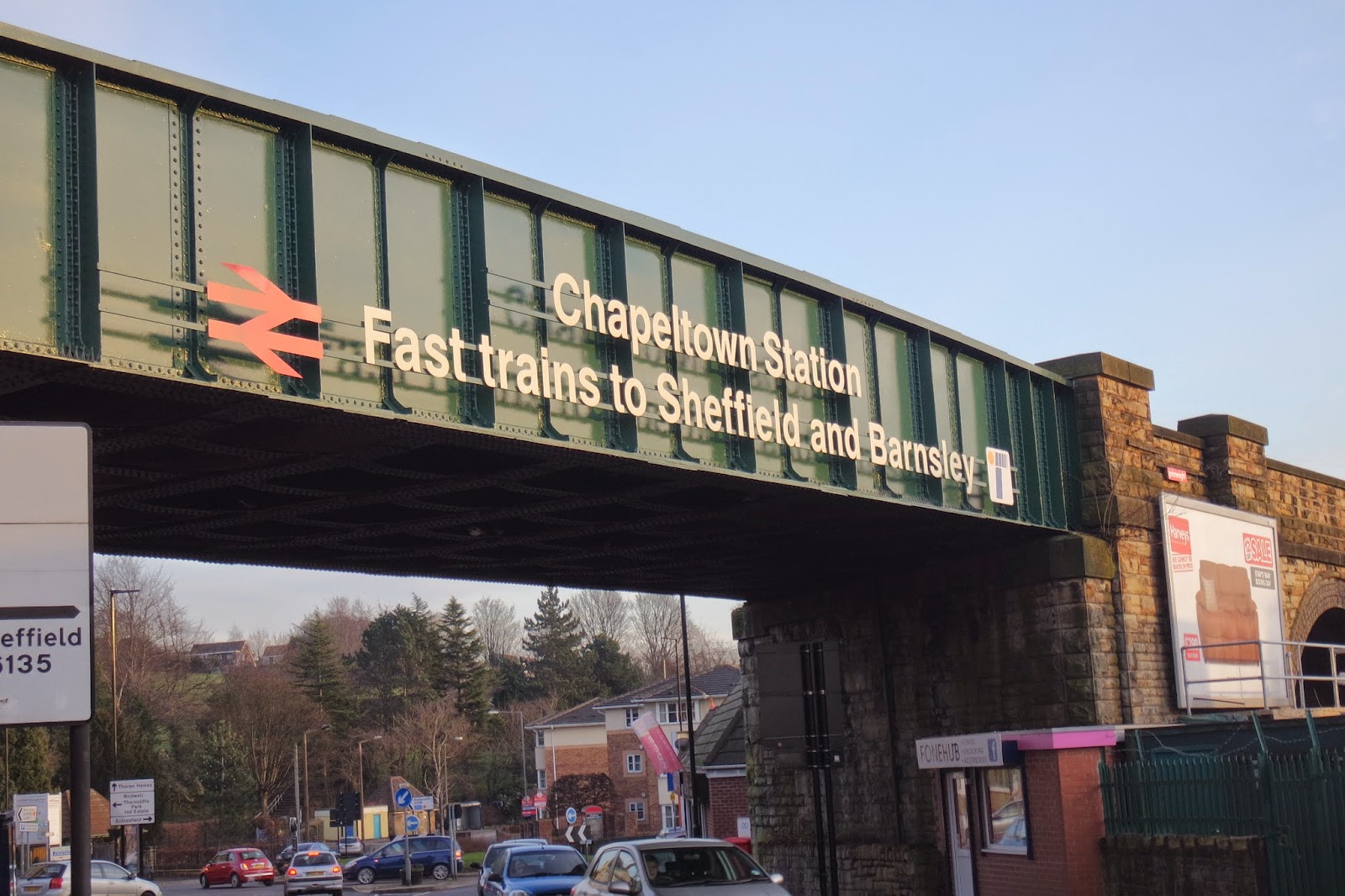 It's the "fast" that really sold it for me.  It's a deliberate two fingers to the drivers trapped in a jam underneath it. 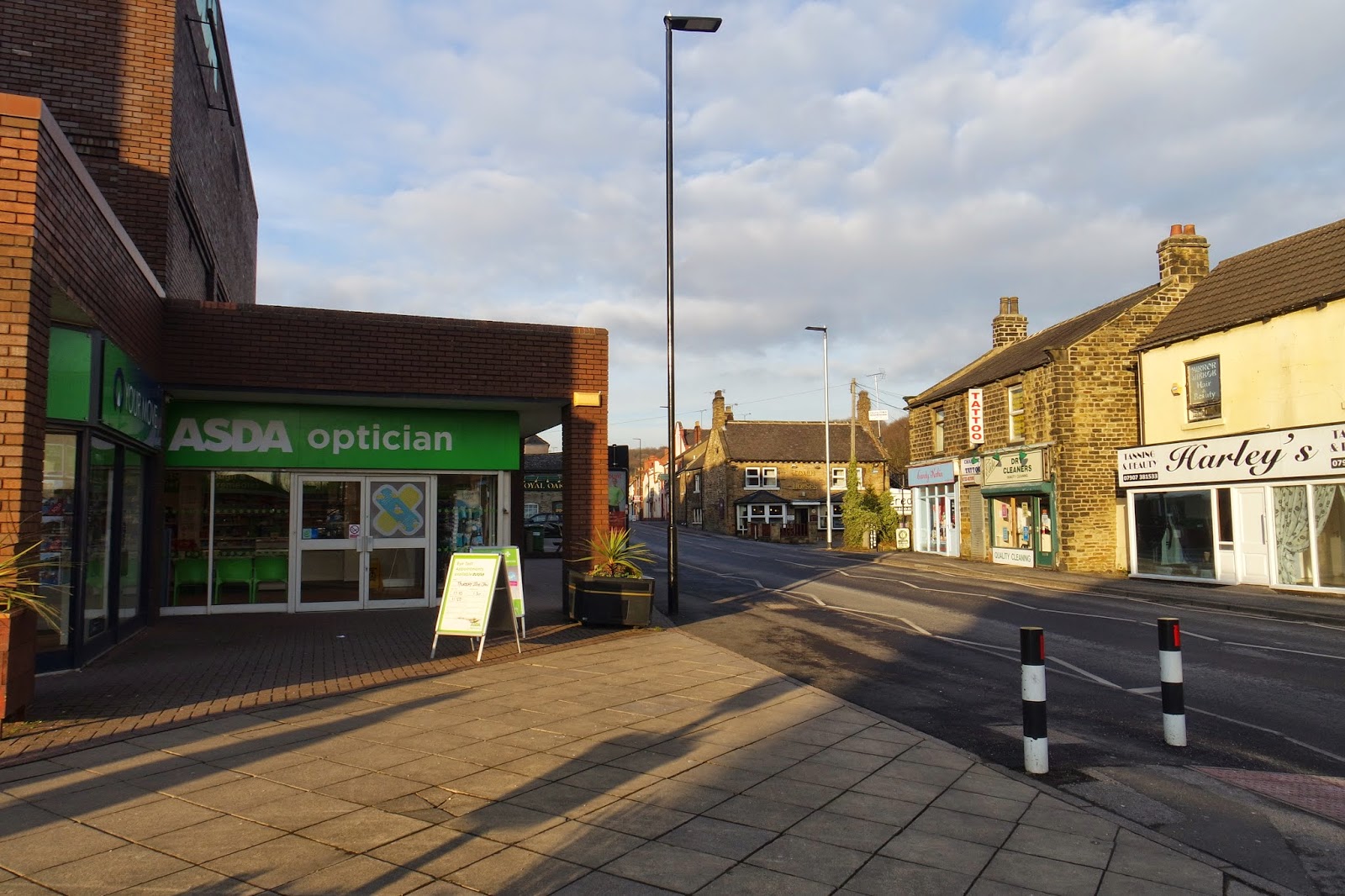 I should have had a proper walk round the town, appreciated its sights, its ambiance.  I had an hour until the train back to Huddersfield after all.  Unfortunately, right outside the entrance to the station was a Wetherspoon's, and I am weak. 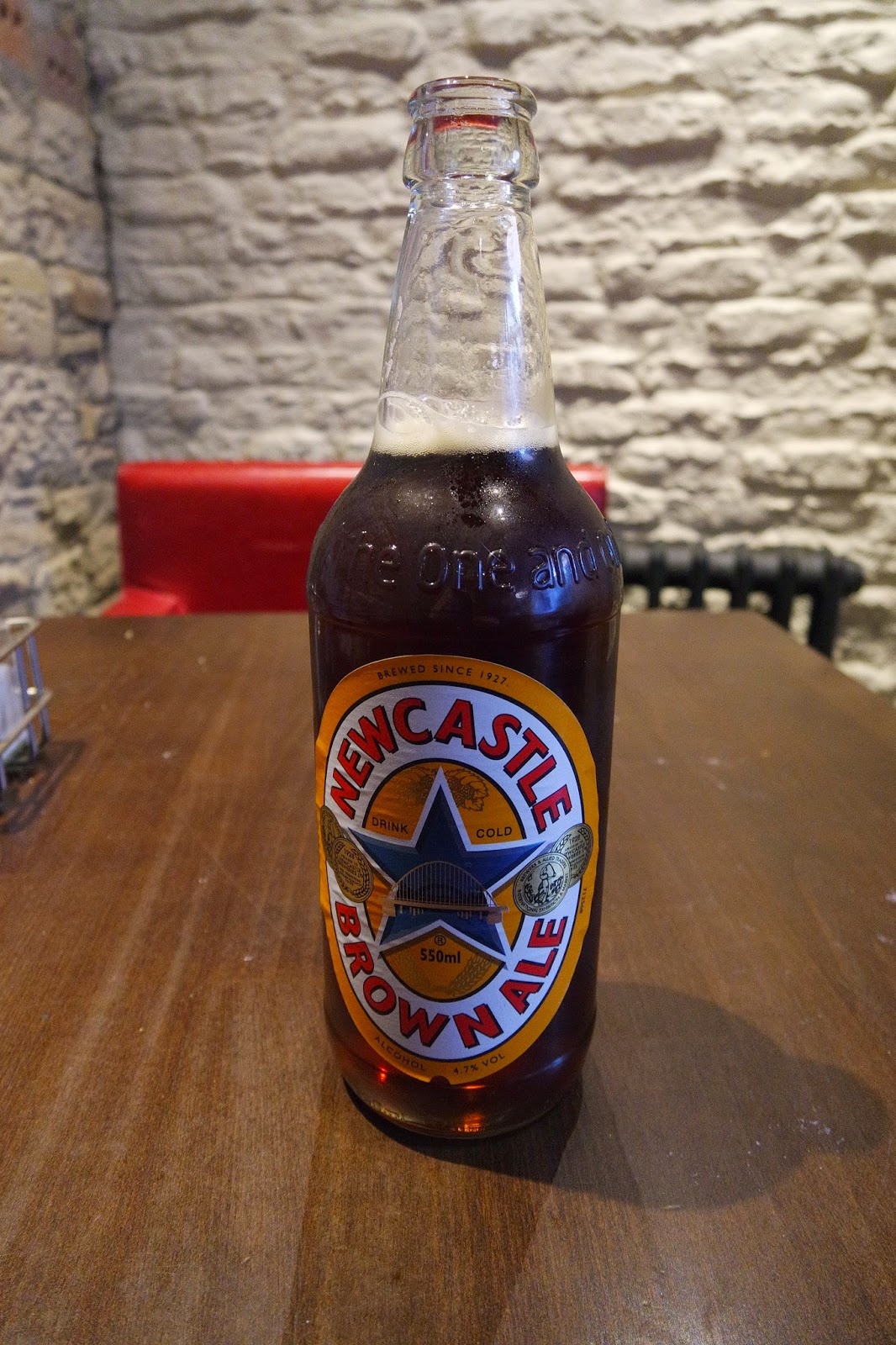 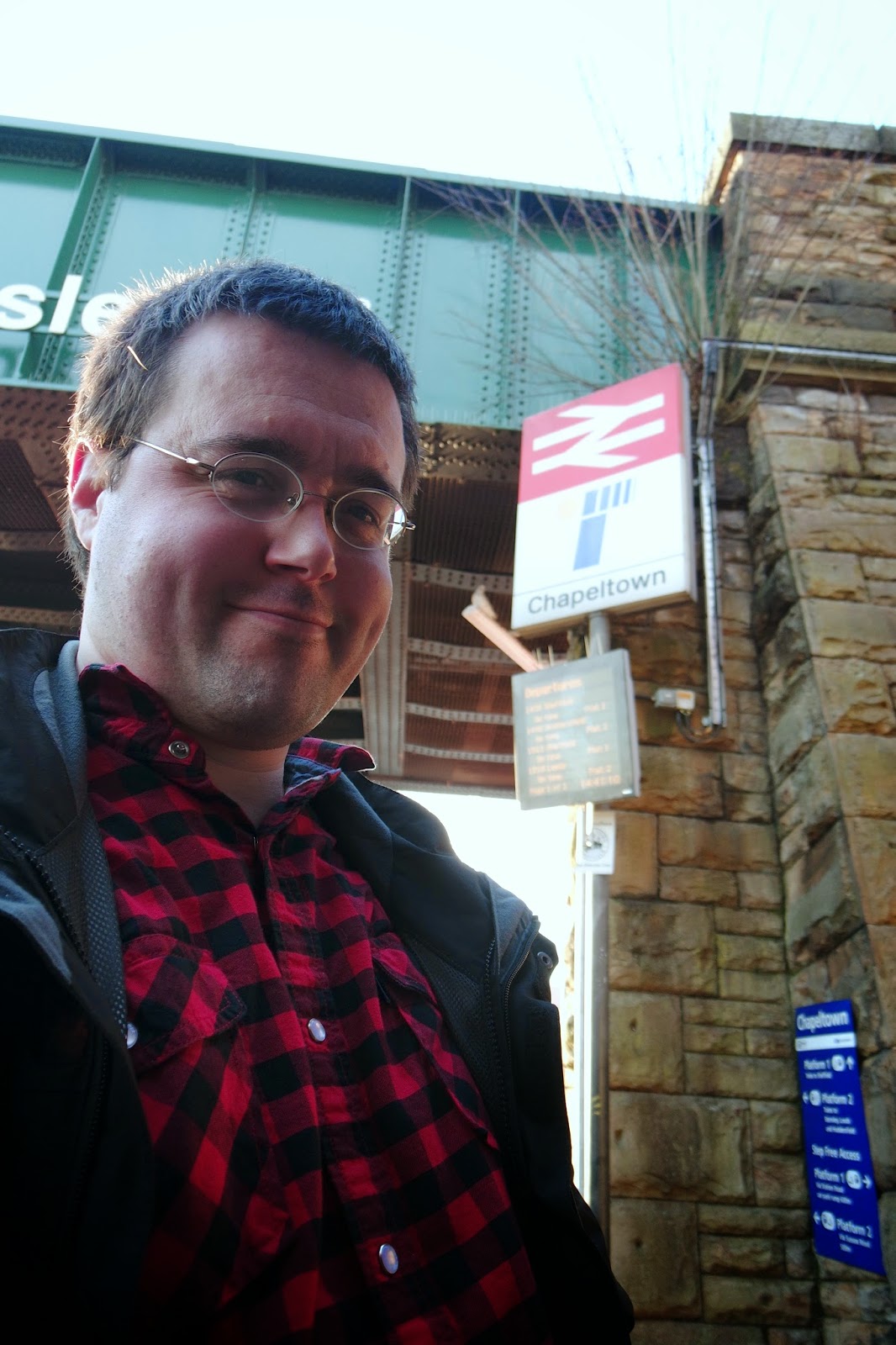