The Railways vs. Spontaneity 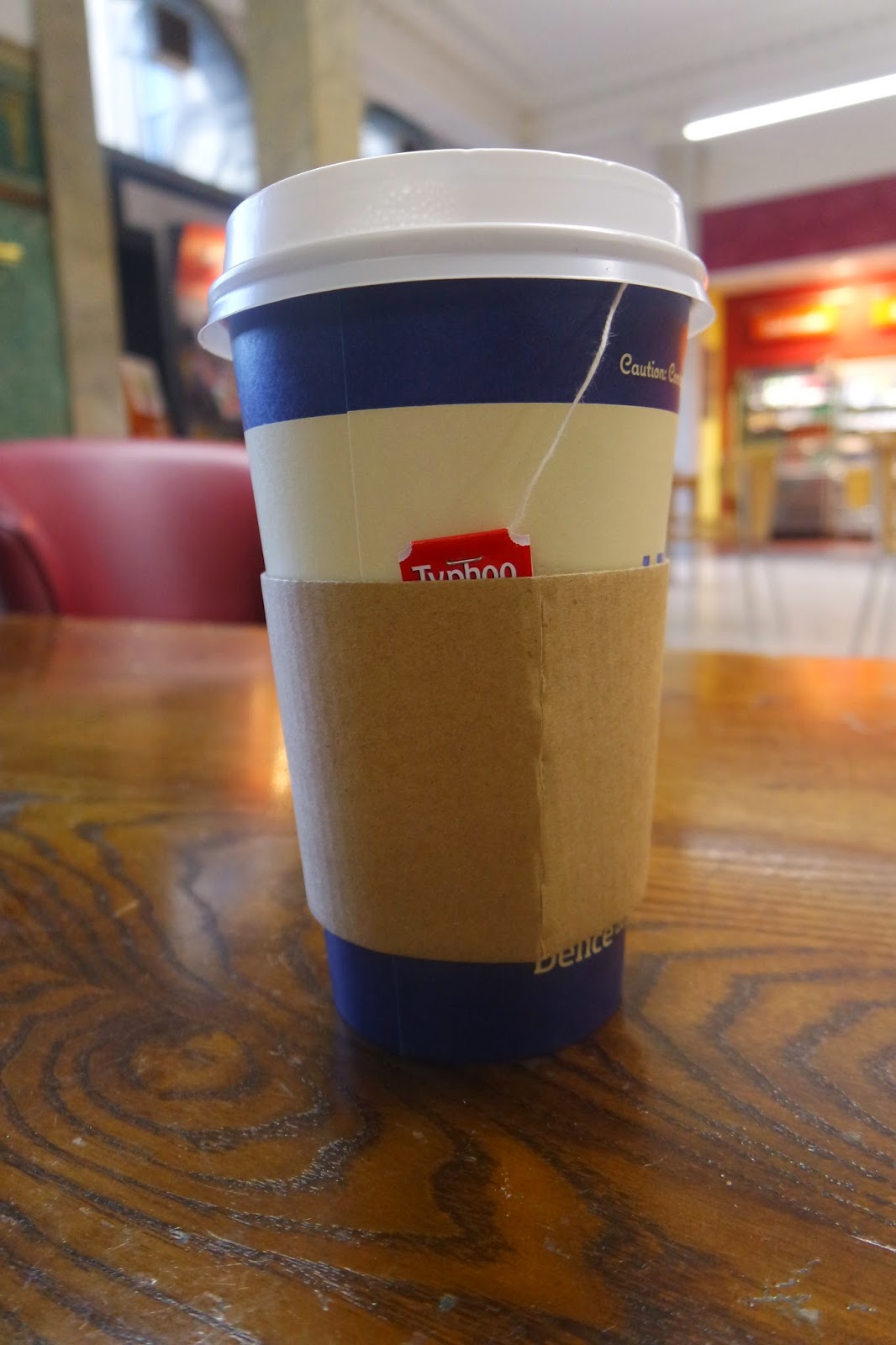 Tea makes everything better.  Tea soothes and calms.  Tea relaxes and massages the tensions away.

I needed a cup of tea.  Another one.

I'd decided to be spontaneous.  It'd been too long since I'd gone out on the trains; a couple of plans had to be aborted, and I'd had a lot of stuff going on at home as well.  The run up to Christmas was getting hectic.  A nice day out in the hills, I thought.  A quick wander round the North.  That'll clear my cobwebs. 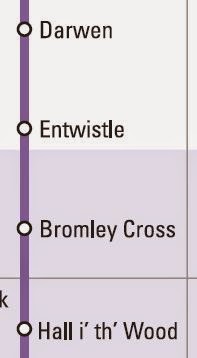 I picked the Darwen branch almost at random.  It connected two stations I'd already done, Bolton and Blackburn.  It mixed town with the scenic Pennines.  I figured I could collect it and still be home for four o'clock, because I had some stuff on that evening (it's been a positive social whirl around here, I tell you).

It was only after I'd bought my Lancashire Day Ranger that I realised how bad the "signalling problems at Lime Street station" actually were.  The big friendly board above Costa promised me that my train to Manchester Victoria was running and on time; it was the Newcastle service, so I figured it would get priority over the grunting Pacers running to Blackpool.  As I stood on the other side of the barrier, at platform 3, I watched tense unhappy faces twitch with each announcement.

This is a platform alteration...

This service will not call at...

The dull flat tones of the computerised voice drizzled fake sympathy into our ears.  The Wigan service, due to leave at 10, was cancelled by the autotuned woman, only for a bluff Scouser to break in a few moments later - "please disregard the previous announcement.  The 10 o'clock service to Wigan North Western will run as normal."  Words that became sarcastic as it tipped past 10, then 10 past 10, then carried on, with the diesel on platform 2 remaining dark and untouched.

I bought myself a cup of tea.

I stood at the head of the local platforms, watching for trains.  The way into Lime Street is via a long cutting, giving you a moment of excitement as the white lights of the engine burst out of the darkness.  The trains that arrived were rolling Pacers, lolloping from side to side and chugging their way up to the platform.  There was no sign of my First TransPennine train, the long blue cylinder with a first class section and a trolley service.  Just these dying workhorses of the rails.

My departure time ticked by without any sign of the train.  There were no announcements.

The Wigan train was still at platform 2.  They were just taking the piss now.

Suddenly my train crashed out of the station throat, six cars of Desiro, along with an announcement that the Newcastle service would now leave from platform 6.  There was a hustle of disgruntled passengers - none of us actually angry, just resigned - a crash of suitcases, impatient coughs to get old ladies to move to one side to let thrusting businessmen rush by.  I found a seat at the back of the train while around me people looked at the reservation tickets, wondering if they were valid.

As we sped across Chat Moss en route to Victoria, I did some calculations.  We were twenty minutes late.  I was going to miss the hourly service to Darwen, which meant a long wait in the station and a recalculation of my plans.  I didn't have time to do four stations any more.  I could only do one pair - either Hall I' Th' Wood and Bromley Cross, or Darwen and Entwistle.

In the Pumpkin cafe, with my anxiety-crushing second cup of tea, I turned to Twitter.  Which pair should I do?  The response was unanimous: Darwen and Entwistle.  It was the more scenic route, the nicer walk, the more interesting stations.  There was a lovely country pub at Entwistle.

I made my decision.  I would get off at Bromley Cross. 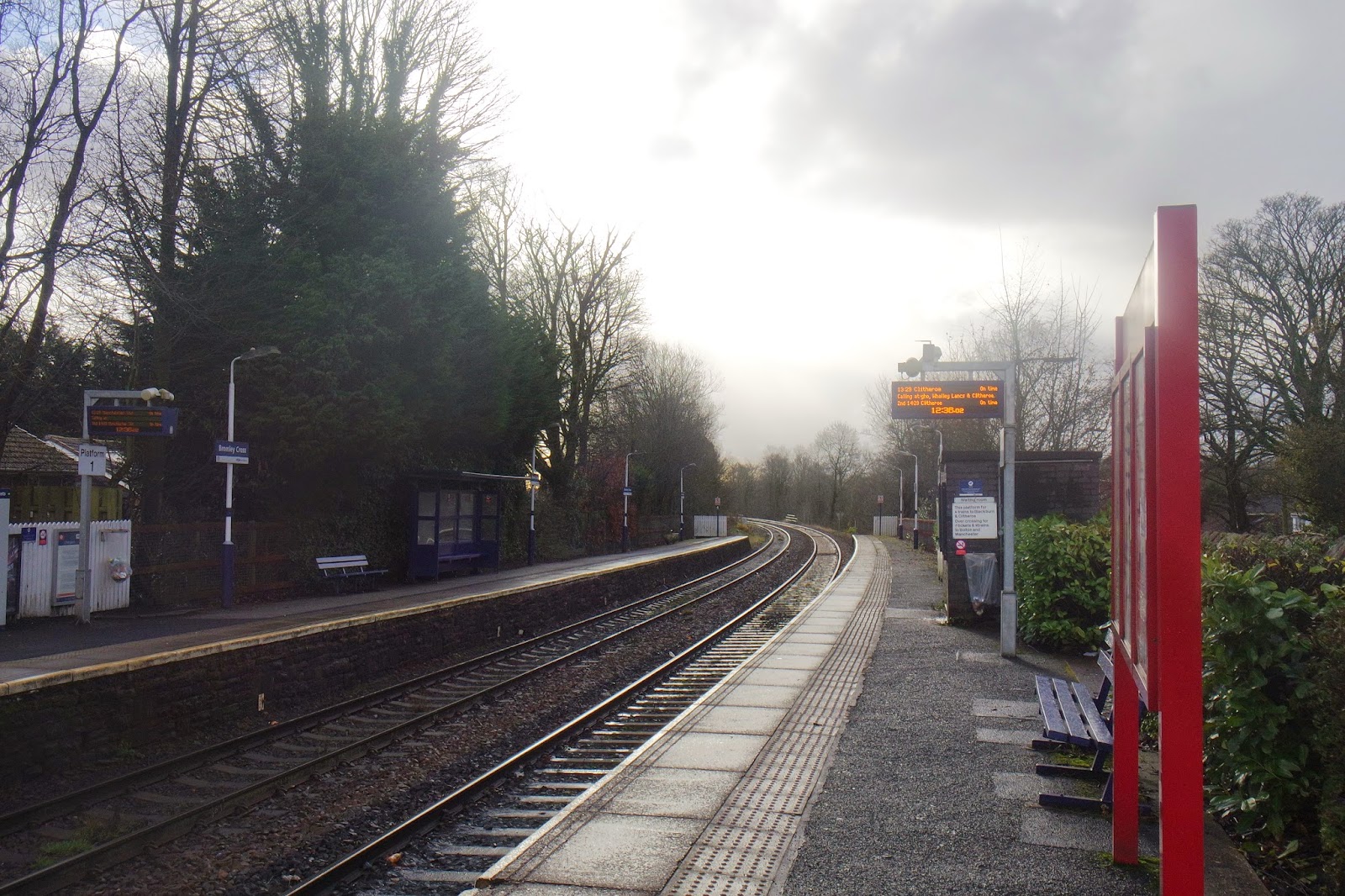 Hey, this isn't a democracy, people.  If you want to influence where I go on my trips you can start paying for the tickets.

Besides, as we pulled out of Victoria, our train began to be battered with sleet.  The weather forecast had been changeable - meaning, they couldn't make their damn minds up what was going to happen.  When I'd left the house there'd been a prediction of snow; it was downgraded to sleet, then rain, then the snow came back on the horizon.  I decided that perhaps Entwistle - a request stop which features a couple of reservoirs, a pub that may not even have been open, and that's it - might not be the best place to be stuck in the snow, particularly after a five mile walk from Darwen. 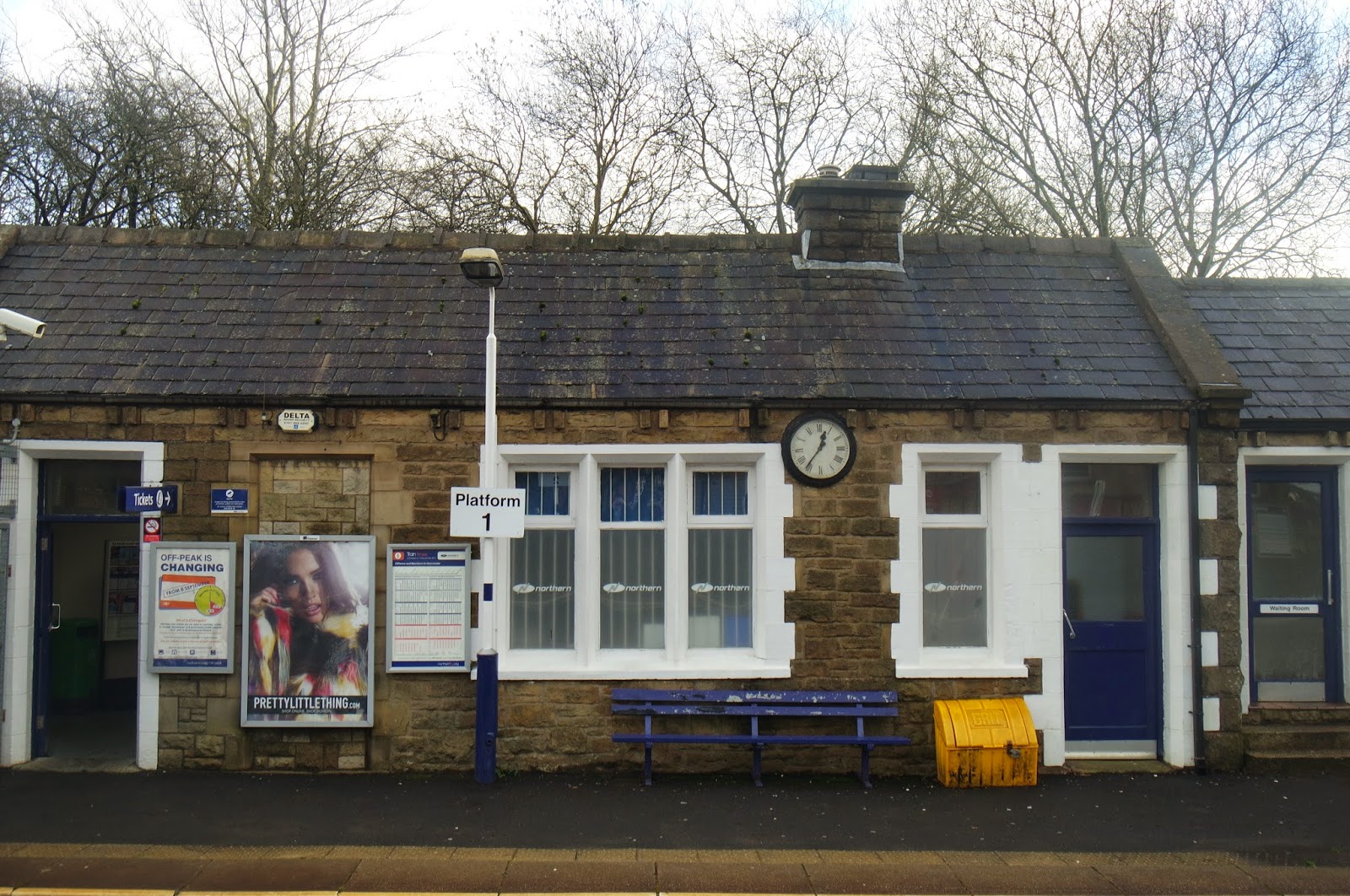 Bromley Cross didn't seem like a bad station, anyway.  It had a ticket office and a signal box.  There was a working station clock and a barrow crossing to get you between platforms.  It was okay. 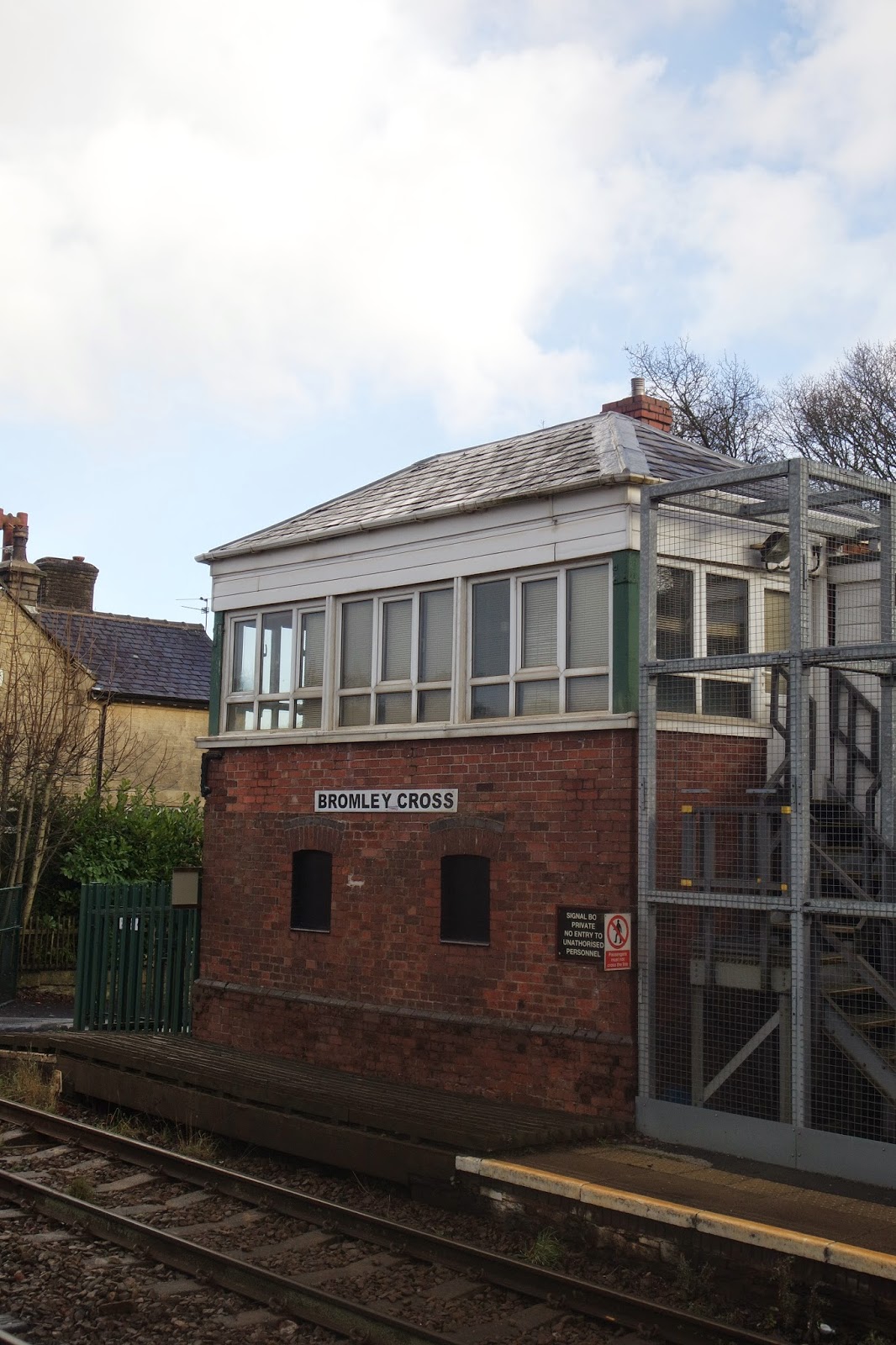 No station sign though.  GMPTE had done one of their cheap jobs, erecting a generic BR/PTE sign that didn't name the station on it.  I walked all the way round in search of a proper sign but there was no luck, so I ended up squatting on the platform like a weirdo. 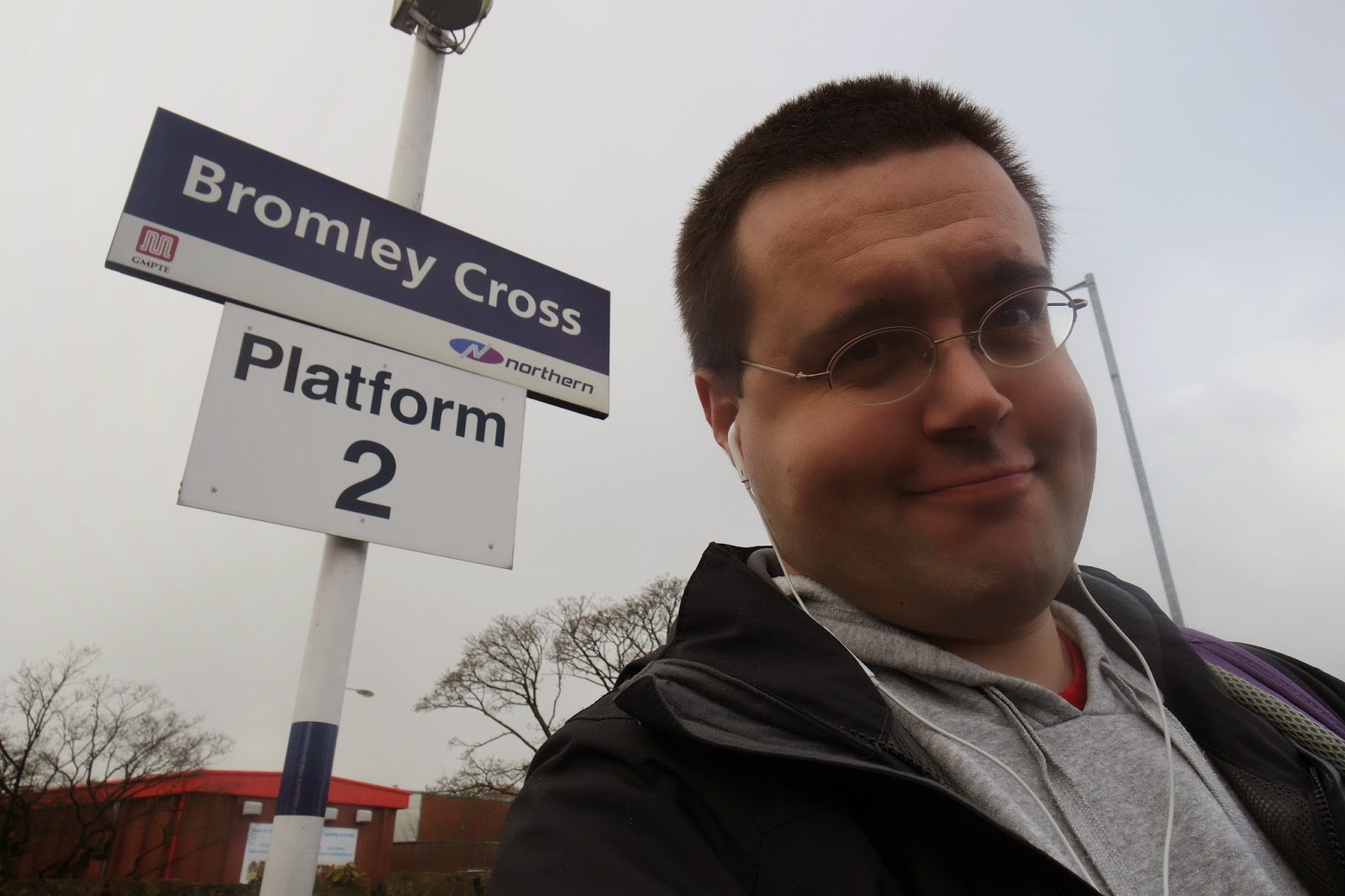 The sleet continued to whirl about me as I wandered into town.  I was right on the fringes of Greater Manchester, with stone terraces mixed with new build cul de sacs and the occasional block of flats.  Innocuous streets ended with a staggering view of the Pennines, like a Government-sponsored mural painted on a brick wall to cheer up a low area. 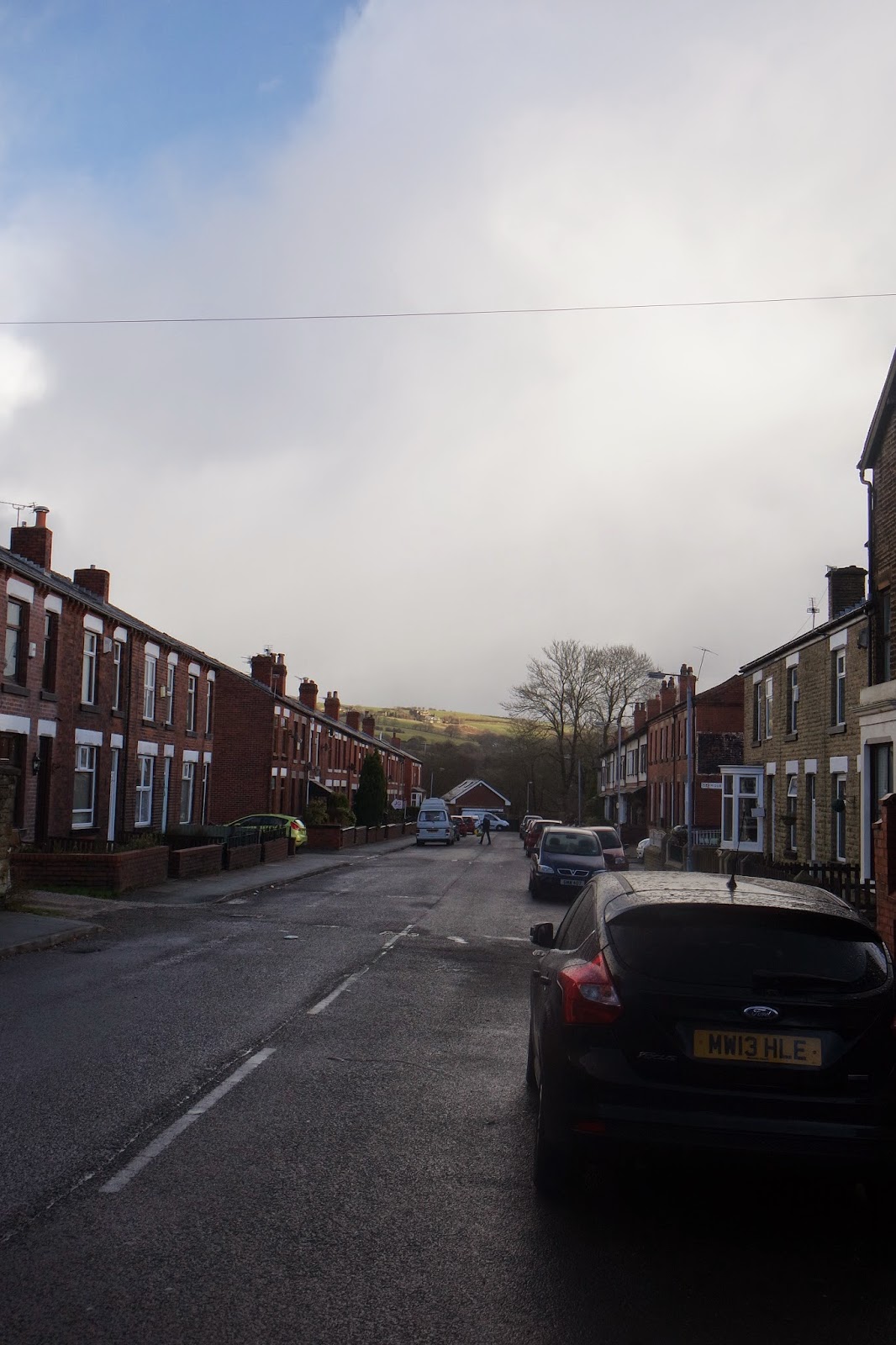 The weather finally gave up then.  It'd been fighting the too-warm December, trying to bring a little bit of wintry atmosphere to my walk, but it wasn't going to happen.  It folded and let the day become mild.  The sun breached the clouds in laser-shards, low above the horizon and making me squint.

After a brief snigger at a sign for Ramsbottom - I am thirty seven years old - I turned onto a busy main road.  It was lunchtime at the local Catholic school, and teenagers were chomping chips and burgers.  Jamie Oliver would have had a fit.  They clustered in twos and threes with their heads low.  A white van cut into a side street, then paused; it rose from the main road at a ridiculous angle, and he had to rev his engine hard to get the power to go up it. 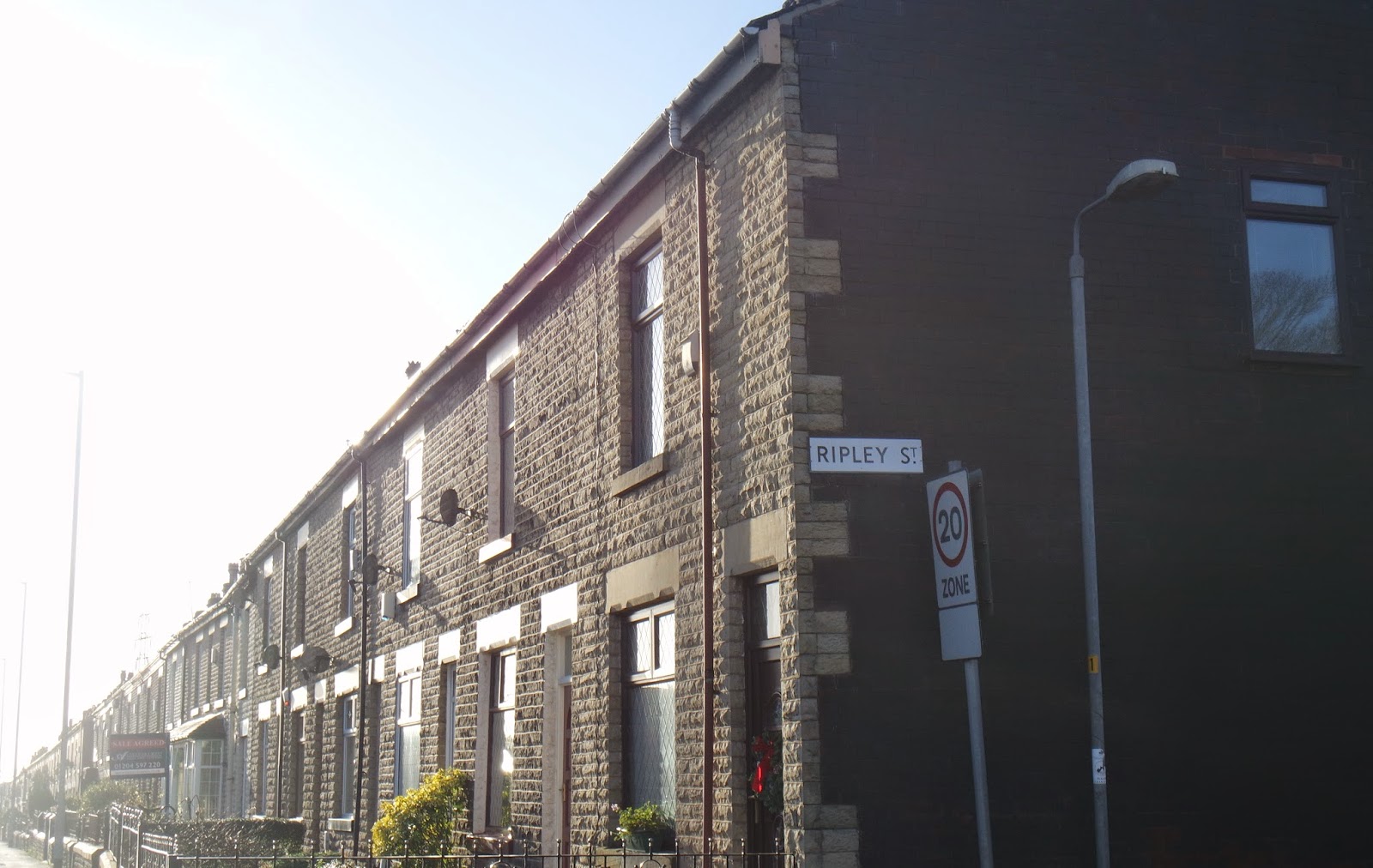 I turned right at the Bolton Castle pub and saw the railway bridge in the distance.  Is that it? I thought.  I'd seen hardly anything of interest, just the edge of town.  It had taken me about twenty minutes.  And here was my second and last station of the day. 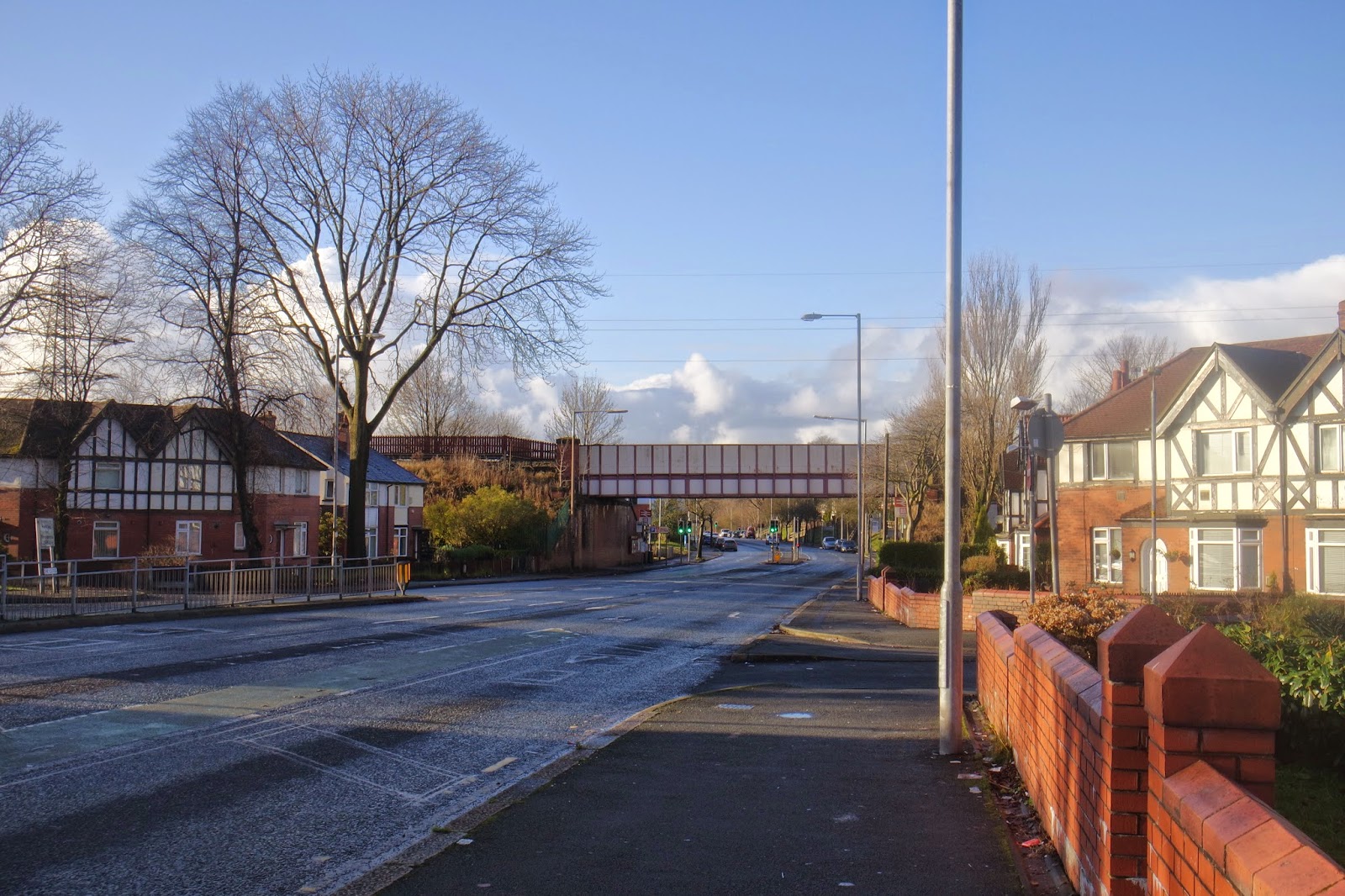 On the plus side, what a brilliantly named one.  Hall I' Th' Wood.  Apostrophes necessary.  Is this the only example of a dialect pronunciation making its way into a station?  I can't think of any off the top of my head, but then again, I have a terrible memory.  The area is named after a 16th century mansion, unsurprisingly in a nearby copse, and referred to by that nickname.  It's great.  It deserves a better sign though. 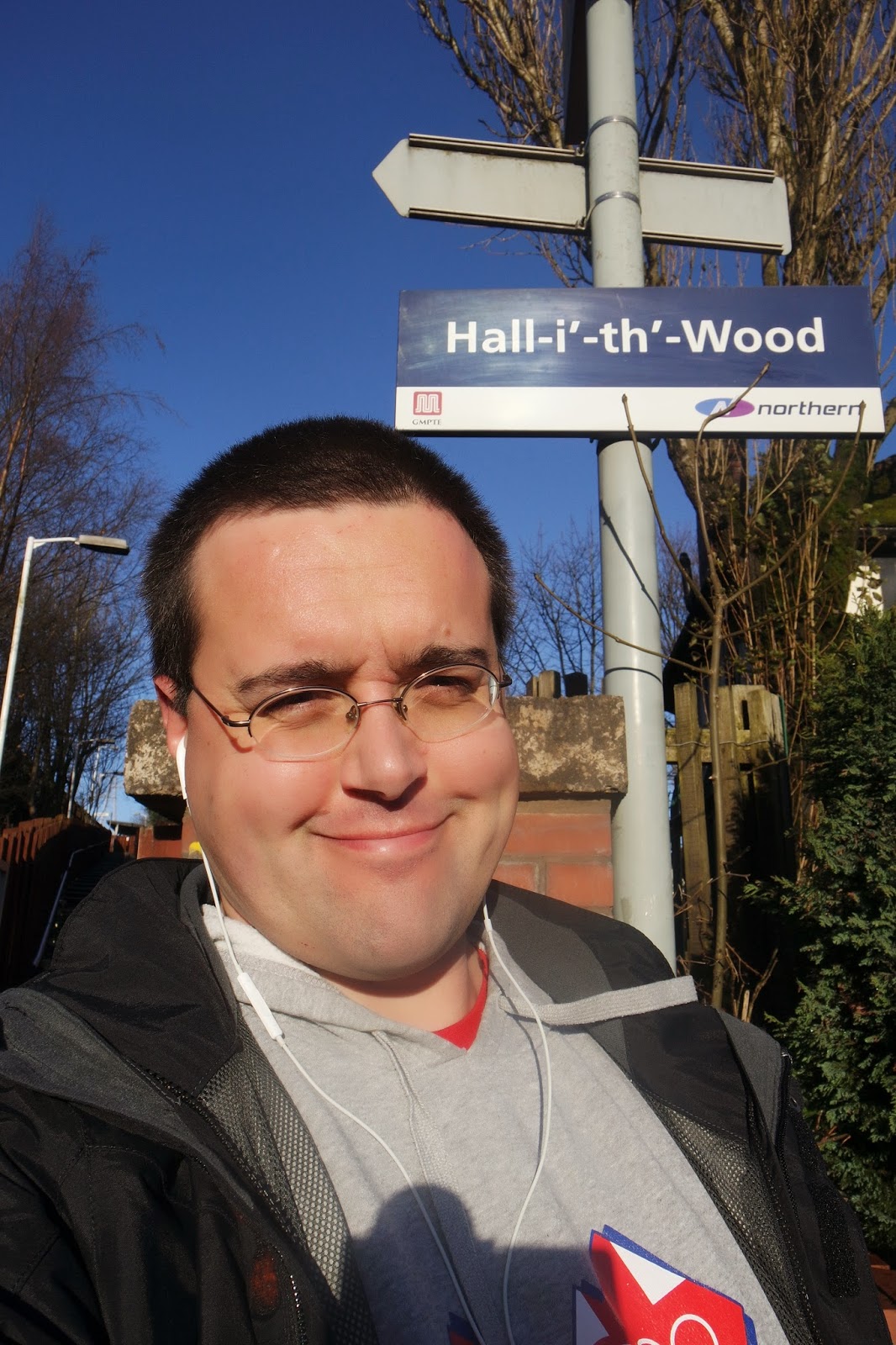 It's a relatively recent station, too, opening in 1986 and consisting of two platforms splayed either side of the main road.  There's a little wooden shelter and a bench but that's it.  I stood by the track, rocking backwards and forwards on my heels, waiting for my train. 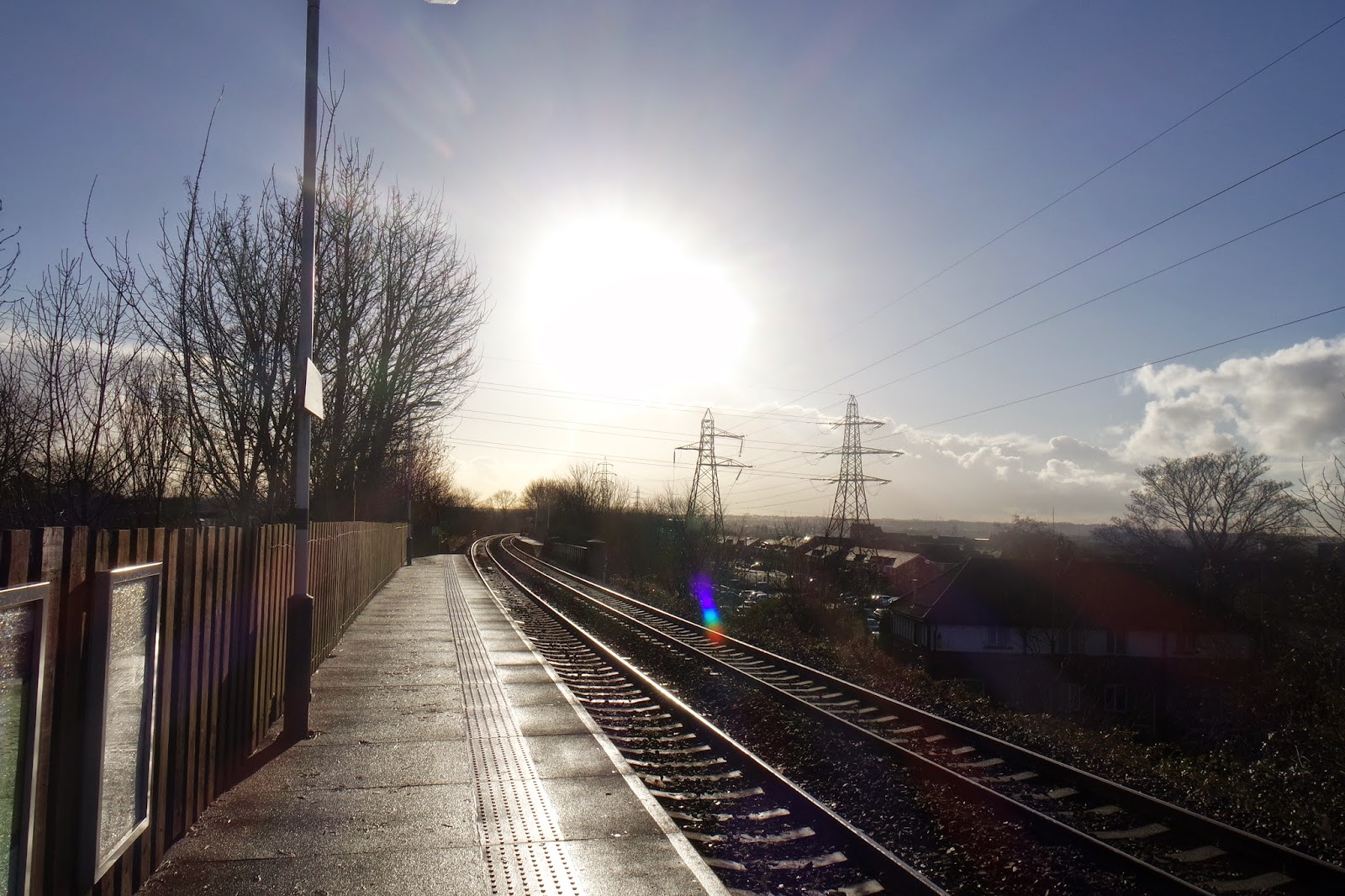 What a let down.  All that way for just two stations.  Not even difficult to get to ones - these weren't Redcar British Steel, just regular commuter towns.  Perhaps I should have listened to my Twitterati?  (No, let's not be hasty).  I resolved to be more organised in 2015.  I resolved to plan better and not be so casual about my station collecting.  And I resolved that, when I got back to Manchester Victoria, I would have a cup of tea.
Posted by Scott Willison at 12:23

Besses o' th' Barn used to be a railway station with a local dialect spelling. It's Metrolink now. Does that count?

Ah. I now see this is long-closed. I must have seen it on the old map at Manchester Victoria and assumed it was still open. Mea culpa.

ps glad you're back on the rails, as it were!

Yes! Besses O' Th' Barn. I thought there was one on the Metrolink but - and this is a good indication of the passion I put into these blogs - I couldn't be arsed looking it up. Still, it's another Lancashire one; is there nothing in Scots or a delightful Cornish dialect?

The east end of the tube map definitely needs an 'Ackney Wick, an 'Aggerston or an 'Ainault.

I always loved the name Besses O' Th' Barn. But Hall I' Th' Wood is even better.

"Various
legends exist of how the name (Besses O' Th' Barn") came
about, including one involving Dick
Turpin and his horse "Black Bess".

The most reasonable sounding tale is
of a local pub which looked like a
barn and was run by a lady called
Bess. The local invitation to a drink would be, "let's go see Bessie at th' barn. Later, as houses were built around, the name came to mean the village.
whole village, not just the pub.