319 Problems and My Trains Ain't One 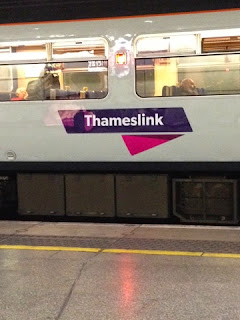 I'm writing this on an iPhone. A 4S as well, not one of your modern times new the size of a dinner plate. I'm tapping at it with chunky thumbs and getting a hunch in my back.  I'm writing it just because I am so devoted to you, my beloved readers.

Actually that's not true.  What happened was I rode up from London to my mum's house in Leagrave on a Thameslink train yesterday. Not news of course, but the fragment of interest in it this year is that these are the trains us poor souls in the north are going to be gifted with. 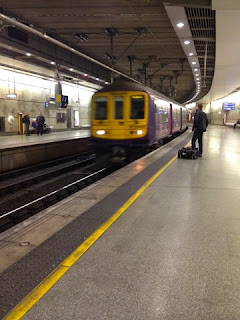 If and when Network Rail get round to finishing the electrification of the Manchester-Liverpool route, these will be the workhorses that will run the services. These are class 319s and they're twenty odd years old: too old for the Capital's commuters apparently, but fine for us northern scum. I suppose the thought is "you've got Pacers right now, so be glad you're getting anything;" this is the same principle I used when I wrapped an empty crisp packet for the BF's gift tomorrow. It's better than NOTHING AT ALL. 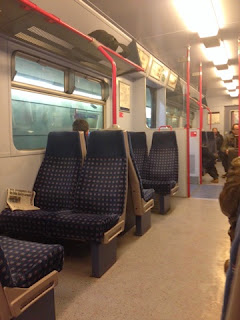 We've been promised a refurb before they come our way. Possibly including air conditioning but I'm not holding my breath. With any luck they'll address the on-board toilets, which have always been a crime against humanity: faeces smeared boxes that are cleaned only once a decade. Still if I squinted I could pretend I was riding THE TRAIN OF THE FUTURE. 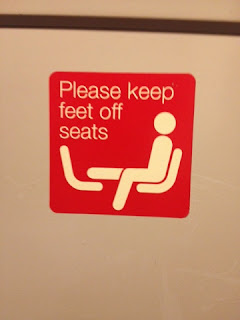 Apparently feet aren't allowed on the seat, but enormous penises are.

So yeah: they're ok. They're electric trains, which is a plus, and yes, they're not bloody Pacers, or that mad scheme to turn wrecked Tube trains into something suitable for the mainline. Hard not to feel just a little bit unloved though. 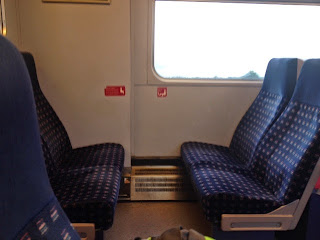 (Also, merry Christmas and all that jazz).
Posted by Scott Willison at 17:53

I assume you've seen the pictures of the first refurbished unit on Northern's web site? http://www.northernrail.org/northern/electric-trains

Oi! We have plenty of older trains than the 319s in the south east, thanks! And I suspect when you get them, they will look a lot nicer than they currently do. And what is it with older trains and toilets being terrible. I was on a FGW train a few weeks ago and the toilets were disgusting

So funnily enough, I was on a 319 today. It was a Thameslink train in Southern livery. And inside was a remarkable sight. Mostly the train was in the style of the Connex era refurbishment but with (very faded) First CC moquette in the seats.

But one bank of seats in the carriage had been stripped out and replaced with a completely different style of seats, complete with FCC pink grab rails (probably the old "lounge" area that Connex put on the trains). Meanwhile some doors and panels had been rather randomly repainted in FCC colours, resulting in a mix of blue and lavender all over the place. Oh, and the entire of the toilet had been repainted in FCC style too. Except the seat.

Given Northern are refurbishing them, I'm sure you'll be getting them in a far superior state than they'll be leaving us in... Cos clearly FCC couldn't have given a rats monkey about the state of the fleet they were putting out.

I rode from Leagrave to Bedford on a former Southeastern train that was unbelievably sexy. Smooth movement, automated voices and dot matrix signs, nice seats. It reminded me that we up North really are getting some second hand shit.

The Class 377s are nice. Worth knowing why they were purchased in the first place - they were originally purchased to replace the old slam door stock; the last on the network.

Now they were pretty dreadful trains as well!

As a Trainee Driver (soon to be qualified I hope!) I can correct you on one thing for sure

and despite them being a little old, they are fantastic trains!

They are comfortable to sit in, have windows you can actually OPEN and are a real train to drive, much more hands on than the newer ones we have now

I personally LOVE them, they will keep going in the wind and rain, snow and ice, so when your able to get home in the winter and us Southern Softies are struggling with a little snow flurry, your hopefully remember me :)