Waiting at Bedford station for my train north, a thought occurred.  I'd only been along this route once before in my life, on a trip to Keele as a green sixteen year old.  I was checking out my first choice university though, in all truth, there was no need for the trip: I'd already made my mind up where I wanted to go.  It was Keele or bust.  It just appealed.  The trip involved a train to Derby, then another to Stoke, then a bus; the only things I can really remember about the journey now was the cobbled streets outside Derby station and the railway bookshop at the side of the entrance to Stoke-on-Trent.  Even then my imagination was caught by stations and books and not much else.

The Midland Main Line is still run by diesel trains, unlike its electrified brothers to the East and West.  It's dirty and old fashioned.  It delighted the trainspotting teenager and his dad on the island platform though, the boy pumping his arm up and down in a vain attempt to get the driver to blow his horn.  Unfortunately we'd all heard him blow it as he crossed the river, and he didn't want to push his luck by honking twice in quick succession.  The boy shrugged philosophically, and folded up his camcorder and tripod to move to a different spot for a different video. 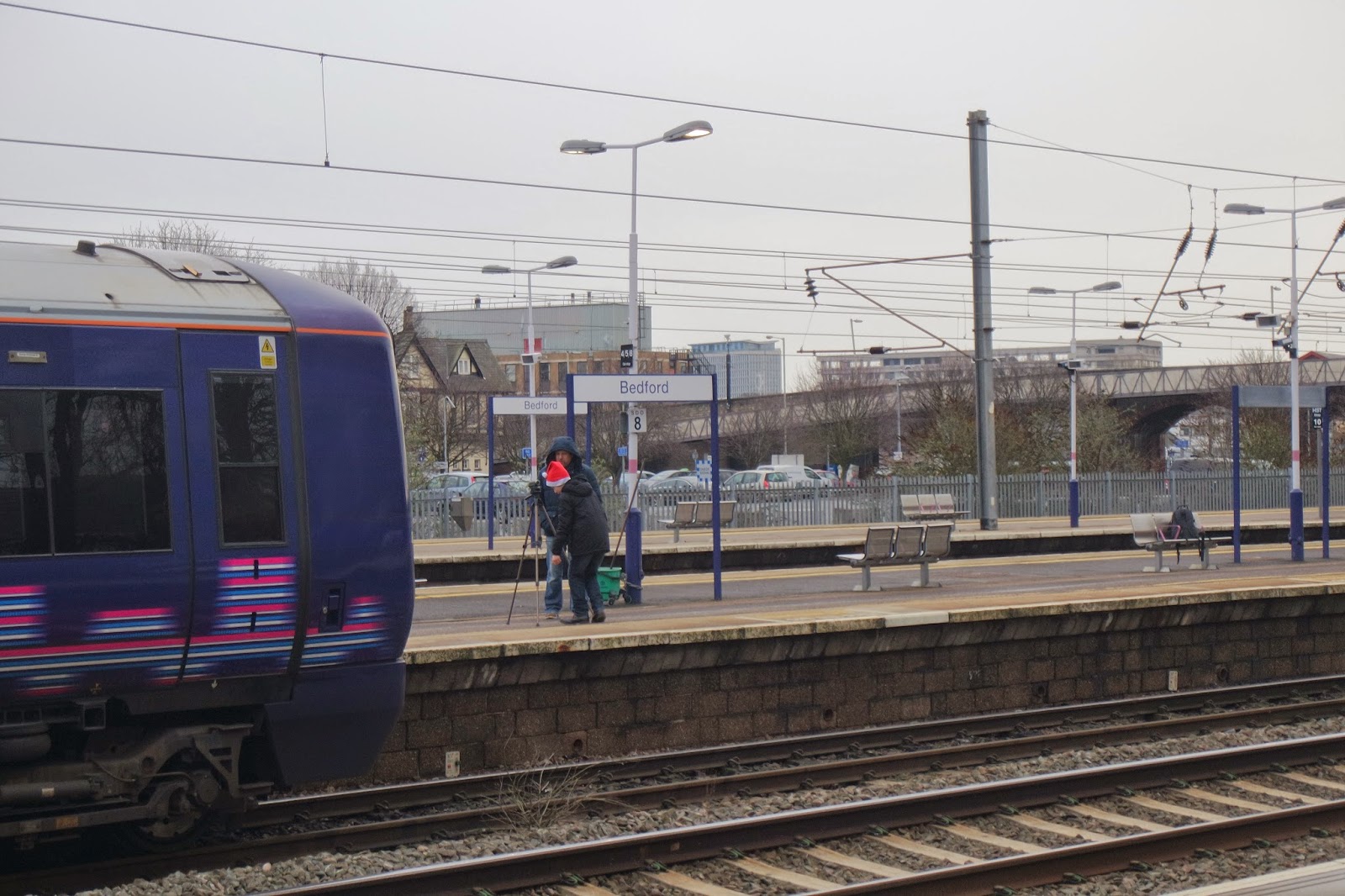 I bagged a seat by the luggage rack, luckily; my bag was laden with presents after my Christmas at my mum's.  She got me alcohol and my brother got me Blu-rays - they know me so well.  It was a chilly train, the old InterCity 125s not blessed with the same level of comfortable air heating as the Pendolinos (but not cursed with their frequent faults either).  Across the way was a tired mother and son, him watching a DVD on a tiny player, her leaning back and trying to rest despite his frequent interruptions.

Bedfordshire quietly went by.  Flat and unexciting, the land dotted with ponds made from gravel and clay pits.  A dual carriageway appeared alongside and raced us for a while.  Small towns went by, places that probably used to have a local train service until Beeching, leaving behind only the occasional mossed over platform or a sudden widening of the gap between the tracks to accommodate a long-gone building.  The change to Northamptonshire was unmarked and unnoticeable.

Wellingborough was a surprisingly tiny station.  It looked like a little country halt, with preserved lamps and a field on one side.  We discharged a load of passengers then carried on again, to Kettering next, then onto Market Harborough.  They were towns I recognised - names from a distant map - but I couldn't tell you a single fact about them.  Was Kettering Wicksteed Park?  And Market Harborough... nope, nothing.

Snow began to appear on distant fields.  We'd only had rain in Luton over Christmas so it came as something of a novelty.  The snow crept in, first on flat roofs, and far off hills, then the fields became dusted at their tips.  It got thicker and deeper.  Untouched expanses of white that I wanted to break with footsteps.

Leicester - finally somewhere I'd heard of.  Ugly though.  Big blocky buildings and a station that was in need of refurbishment.  We loitered for a while, even though we were already late, and I watched another gaggle of trainspotters at the end of the platform.  Half a dozen of them, drinking Pumpkin cups of coffee; one had a Tupperware of sandwiches.  They were laughing and jocular, and a member of the station staff kept giving them sideways looks.  I wondered if he was going to ask them to move on.  Tell them to take their tripods and their powerful cameras and leave because of, oh, I don't know, "security concerns".  That's as good a reason as any.

Pushing on, and the local stations reappeared, little halts in little towns for commuters to Leicester.  We barrelled past without stopping, not even at Loughborough.  The mother across the way started packing up the crisp packets and bottles of coke she'd accumulated since London.  A man came down the carriage with a bin bag and her son stood up excitedly on the seat.  "Us!  We've got rubbish!"

I nipped to the toilet, clicking the lock and making the "engaged" sign light up (all lower case Rail alphabet, the last bit of Seventies style to cling on in the privatised train).  Those twee, "Please do not flush nappies, sanitary towels, your ex's jumper, hopes..." stickers have migrated to the Midland Main Line.  I expect that kind of crap from Virgin, a train company that probably has EPIC BANTZ on its logo, but I thought East Midlands would be above it.  I pumped with my foot to get the water to wash my hands and went back to my seat.

I thought East Midlands Parkway was the place where HS2 would stop, but it turns out that's East Midlands Hub, about 5 miles away.  Parkway was built to try and act as a midway point for Leicester, Nottingham and Derby commuters, only for it to be astonishingly unpopular.  I can never fully get on board with a station called "Parkway" - it's a made up word that only developers like.  It didn't help that it was built alongside Ratcliffe-on-Soar power station, cowering under its cooling towers and lending the station a bleak dystopian air.  You wouldn't want to come here unless you had to.

Through Attenborough and Beeston, names that rang bells for Dickie and Cheshire reasons rather than anything to do with the stations themselves, and then the outskirts of Nottingham.  I metaphorically closed my eyes.  Nottingham's on the Northern Rail map, so I'll have to come here and visit it properly.  I didn't have time today.  I had a connection to the Liverpool train to get, and I was antsy about getting a seat.  I didn't fancy standing for three hours.

The Midland Main Line is no beauty.  It's the B-team.  The West Coast and East Coast Main Lines, and probably the Great Western as well, connect up properly important places.  They get the big hitters and the big names.  The Midland goes to Conference towns - only Sheffield, as its grand finale, scrapes into the Premiership.  It does the job, but I couldn't see Michael Palin turning up with a camera crew for a Great Railway Journey any time soon.
Posted by Scott Willison at 12:15