Introduction: The Name of the Game 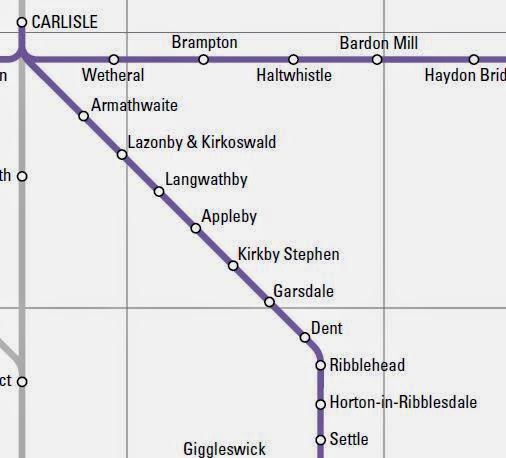 Back then, there were only two stations below Carlisle: Appleby and Settle.  All the rest had been closed in a mass extinction event, not long after the end of steam trains.  British Rail hated the Settle & Carlisle, and really wanted to get rid of it.

Even the company that built it wasn't too keen.  The Midland Railway, which ran trains down the spine of England, wanted to access the lucrative Scottish market but didn't have a line of its own.  It had to send its services over what is now the West Coast Main Line, paying for the privilege and getting to the back of the queue behind the London and Northwest Railway's own trains.  The Midland applied to build its own line to the border, avoiding the LNWR's tracks and going through the wild northern landscapes to finally hit Carlisle.

After a while, though, they changed their mind, and tried to get the Government's permission to abandon the scheme.  It was refused.  Grudgingly, the Midland went ahead with construction.  They sent the line through gaps in the Pennines, following the contours wherever possible.  There wasn't much interest in serving the locals.  Stations weren't in the middle of towns, in the most part, but were just vaguely in the vicinity - Dent is more than four miles away from its village.  The Midland wanted to get to Scotland as quickly as possible, for a slice of that lucrative traffic.

To get over the border it had to cross some of the hardest, highest landscapes in England.  From Settle, the land rises quickly and steeply.  It would have been impossible for steam locomotives to follow the mountainous terrain.  The engineers instead created a line that continually rose at a gradient the engines could accommodate, always rising via tunnels and viaducts, until it reached the pinnacle at Ais Gill (1169 feet) and Dent, the highest railway station in England.  From there it was a more gentle descent back down towards the terminus at Carlisle.

It's a wild, untamed landscape, and one that was particularly rugged in Victorian times.  Entire armies of men were shipped out to build it, creating brand new communities along its length.  At Ribblehead, where a brick viaduct curves across a deep valley, a shanty town sprung up for the navvies.  They stayed there, no matter what the weather; stone bunk huts were constructed along the route for them to hide in when the winter got too bad.

After seven years of construction the Settle & Carlisle opened in 1876.  It suffered from its lack of connections - the LNWR was sweeping past Manchester, Liverpool, Preston and Lancaster on its way to Scotland, while the Midland had a pause at, erm, Appleby-in-Westmorland - and when the Midland merged with its rivals to form first the London, Midland and Scottish Railway, and then British Rail after the war, the route became less and less important.  The removal of competition meant that the best route - the West Coast Main Line - would get all the attention, and so BR closed the intermediate stations in 1970, and then made tentative plans to get rid of passenger services altogether.

It's an expensive line to maintain - the harsh weather and cruel seasons attack the infrastructure, and every time something goes wrong it takes an inordinate amount of time to get to it.  The Ribblehead Viaduct was a hundred years old and being quietly run down so that repairing it became an extravagance BR couldn't afford.  In the Eighties, they finally bit the bullet and applied to close it.

The application was refused by Michael Portillo.  He's subsequently claimed this is his proudest achievement while in office, but considering what else he got up to as part of the Thatcher government, that's not much of a boast; it's like Kim-Jong Un proudly declaring that he's set trends in the field of monocoloured boiler suits.  With the intervention of a team of committed volunteers and experts, the line began a resurgence.

It had a new purpose: tourism.  Its isolation, once a negative, was now seen as a virtue, and rail tours and excursions began powering their way along the line.  It started appearing in those list articles you get in newspapers - the greatest railway journeys in the world, that kind of thing.  Its name took on a legendary status, and the stations started reopening, now restored and repainted in their historic colours.  Additionally, the fact that it bypasses the always-rammed West Coast Line meant that it became a valuable short cut for freight trains, and more and more started to take the route.

Which leads us right back to 2014, and its newest accolade: being collected by the Merseytart.  I'd sort of held back on travelling the Settle & Carlisle because I was a bit over-awed by it.  There aren't guide books devoted to the bit of line between Bolton and Salford; you don't get walking guides based around the delights of Middlesbrough city centre.  I'm an urban traveller mainly, and I didn't think I'd be able to do the line justice.

Plus, it's a mammoth undertaking.  The stations are isolated and lonely.  The service is infrequent - one train every couple of hours, with the last one in the early evening.  The weather could be hostile, and if it wasn't, I might have found all the trains rammed full of tourists.

I finally bit the bullet and spent the last week in March travelling up and down the Settle & Carlisle and its near neighbour, the Bentham Line.  I managed to cross off all the stations, though it wasn't always easy, and it was definitely tiring.  Nineteen stations, one man: it's another Epic Journey With Little Purpose...

Excellent. Looking forward to reading about your travels. I'm a keen photographer, and have shot many fantastic structures (St Pancras/The Forth Bridge....), but the most impressive by far, I visited last December...... well I guess having traveled up and down the line, you know.....

Looking forward to hearing about your journey. This is such a beautiful line and my favourite Northern route. I've been for a walk from most of the stations. I love the fact you can get off the train and be right in the centre of some of the best scenery in Britain.