Day Two: As Good As New

Sometimes I wonder if I should turn vegetarian.  I'm not especially welded to meat.  I've gone for a few days without eating it, and only realised when I stopped to think about it.  Cheese, bread, vegetables, pasta - that's pretty much all I eat anyway.  I might have to be pescatarian, because I do love fish, but still; it doesn't seem that much hassle.

Then I have a bacon sandwich. 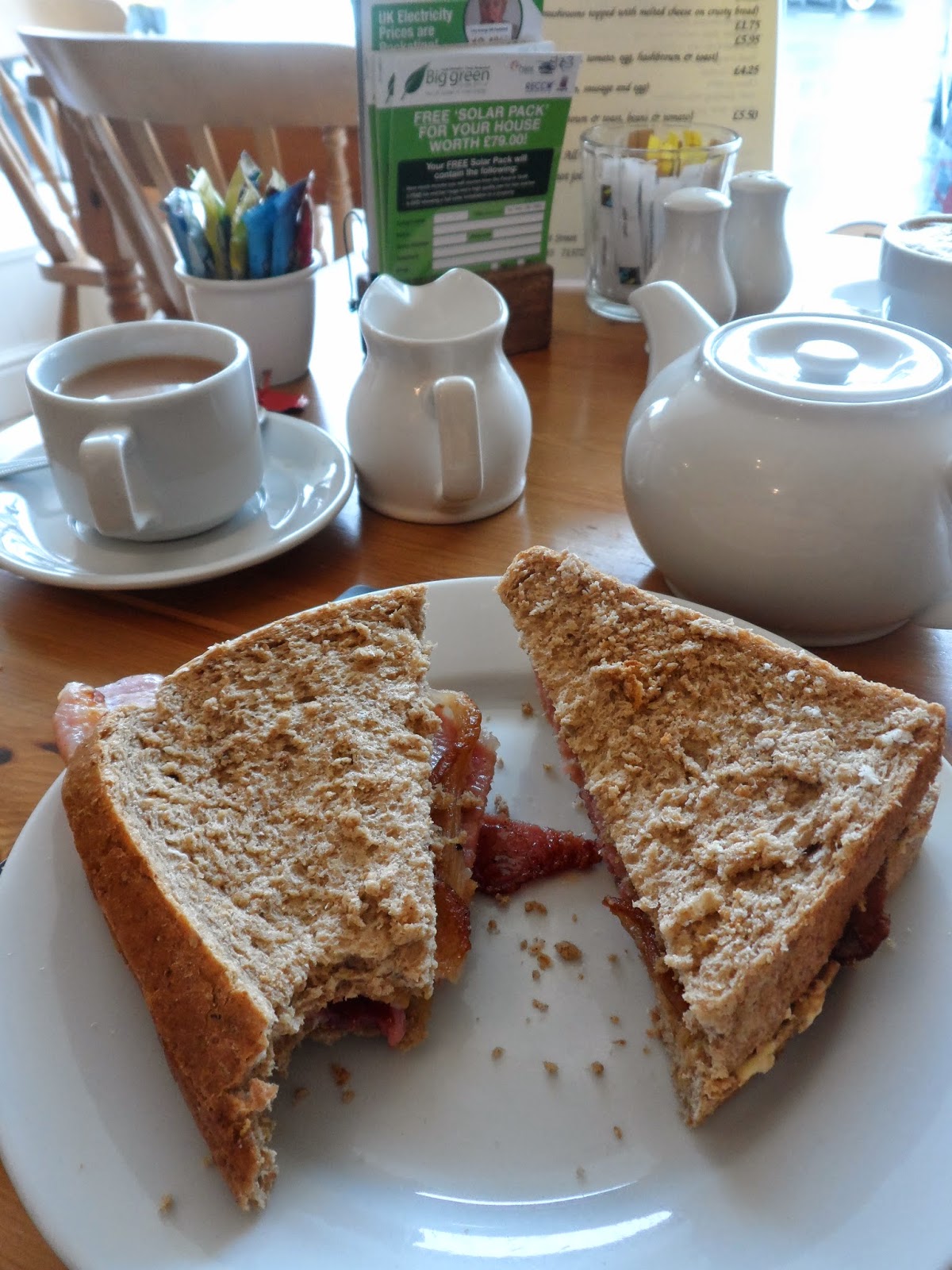 Oh, the mysterious alchemy of a bacon sandwich!  The soft, yet crunchy meat.  The salty tang.  The run of fat into the bread, infusing it with its tasty goodness.  The way the butter melts, swilling more grease around your plate.  Chewing the crusts at the end.  Sometimes - for a treat - smearing the meat with tomato sauce, so thick it globs onto the plate and runs down your chin.  It's a life giving joy.  You could probably tempt even the most hardline Islamist to the Western cause with a decent bacon sandwich.

The one I was eating was very good indeed.  I was in the Mulberry Bush, a cafe-cum-bistro in the marketplace of Kirkby Stephen.  There was a pot of tea beside it - Yorkshire Tea, as a sign in the window proudly proclaimed - and they were playing light jazz.  The only other patron was a builder with strong black tea and a plate of eggs, thumbing through the Yorkshire Post.  It was a wonderful start to the trip.

I had the time to indulge myself because I had a ticket I could only use outside peak hours, and the first train north was at 10:35.  I had time to head into Kirkby Stephen proper for a mooch around and a big hunk of dead pig. 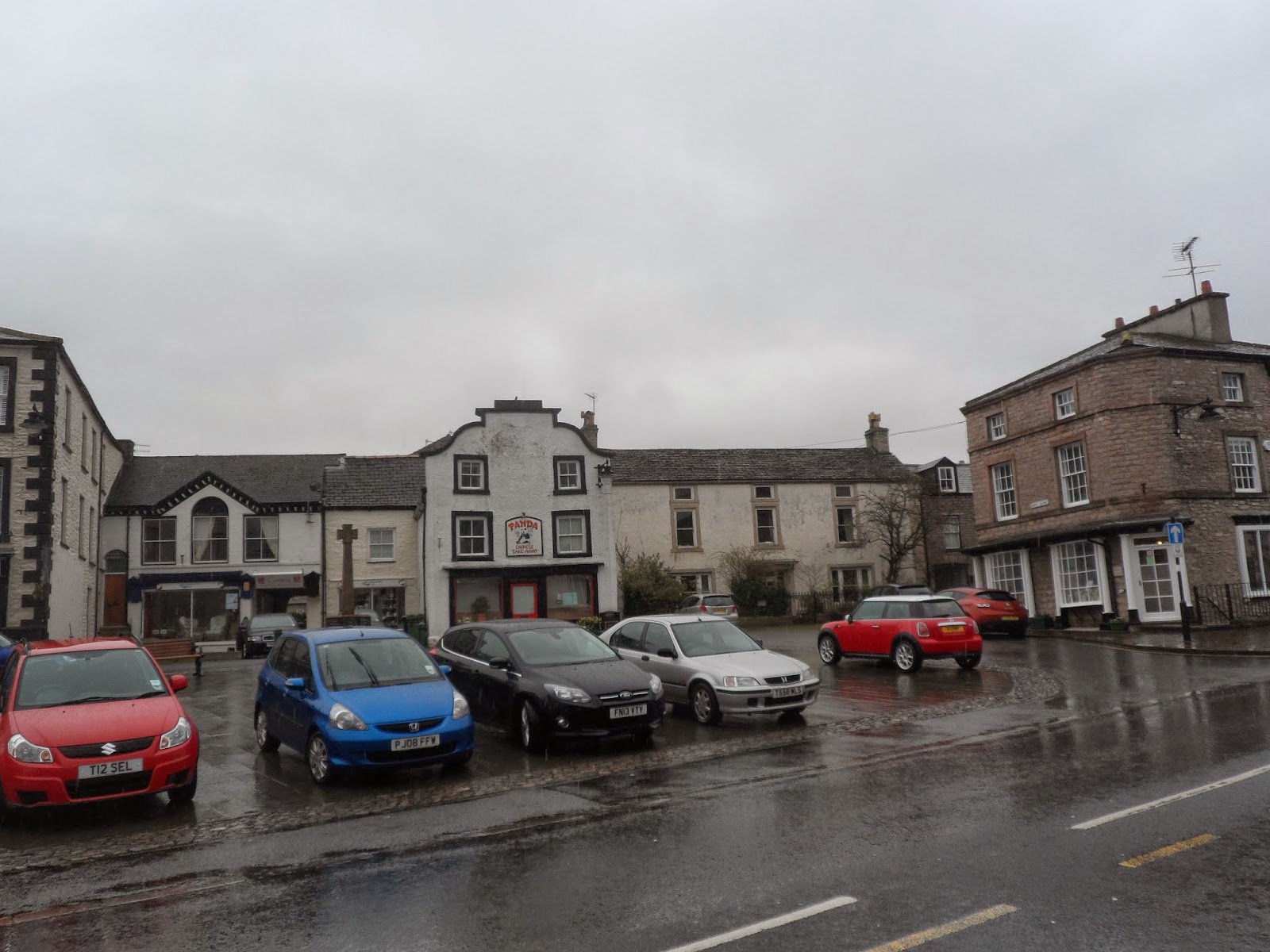 The sparkling, delightful spring of the previous day had been replaced with a relentless drizzle.  I wandered around the charming market square, peering through the windows of shops that weren't yet open, ducking down tiny back alleys between medieval houses.  Kirkby Stephen considers itself a gateway to the Lake District, and there were plenty of cafes, pubs and outdoor shops for all those passing through.  Behind the main street was an extensive cattle market, and a bit of park.  I avoided being run over by a manic lady in a mobility scooter - she weaved along the pavement as though she was riding a Ben Hur chariot - before heading back out of town towards the station for my first train. 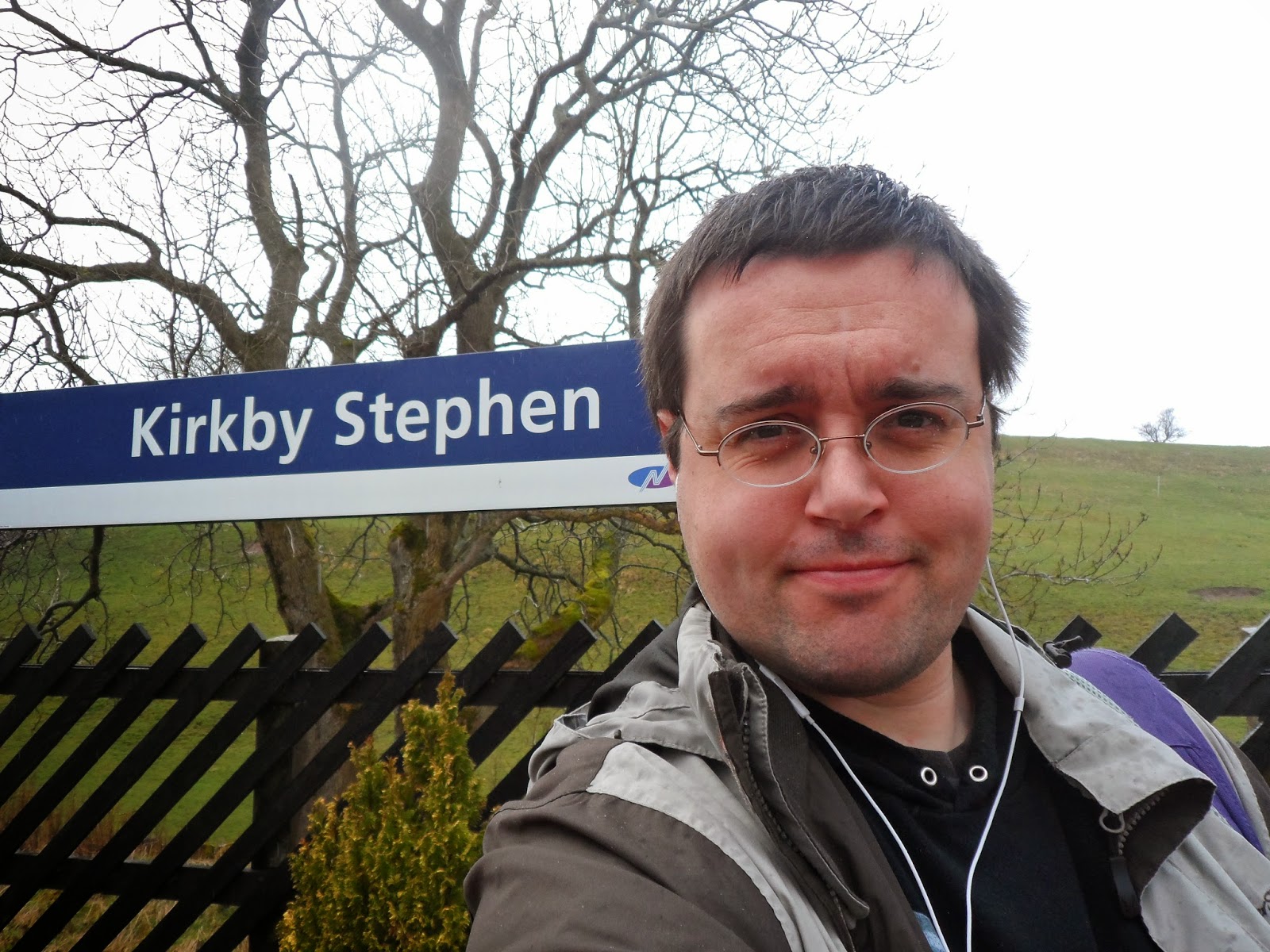 My plan for the day was to collect the four stations between Kirkby Stephen and Carlisle: Appleby, Langwathby & Kirkoswald, Lazonby and Armathwaite.  One fairly lengthy train ride later - Kirkby Stephen really is miles from anywhere - and I was getting off the train at Appleby. 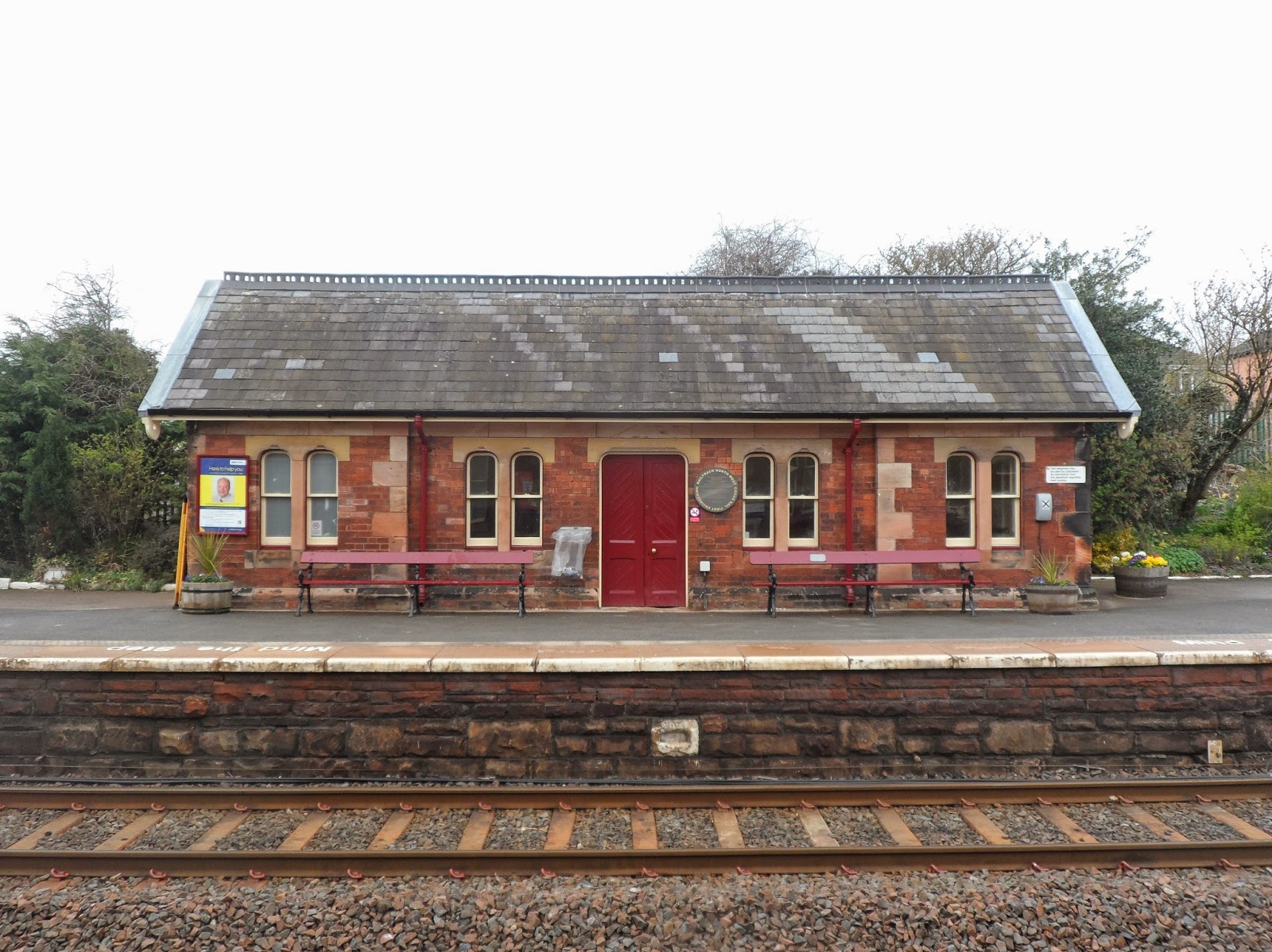 As a station, it was very much like the one I'd just left, only a little better cared for.  If you remember, Appleby was one of the few stations to remain open after the 1970 cull, mainly because it serves a considerable community and is close to the town.  It's definitely under the control of the Settle & Carlisle Partnership now though, having been painted in the traditional colours and incorporating a little waiting area with historic parcel scales and a hand cart.  At the far end of the platform, a water tower had been carefully restored. 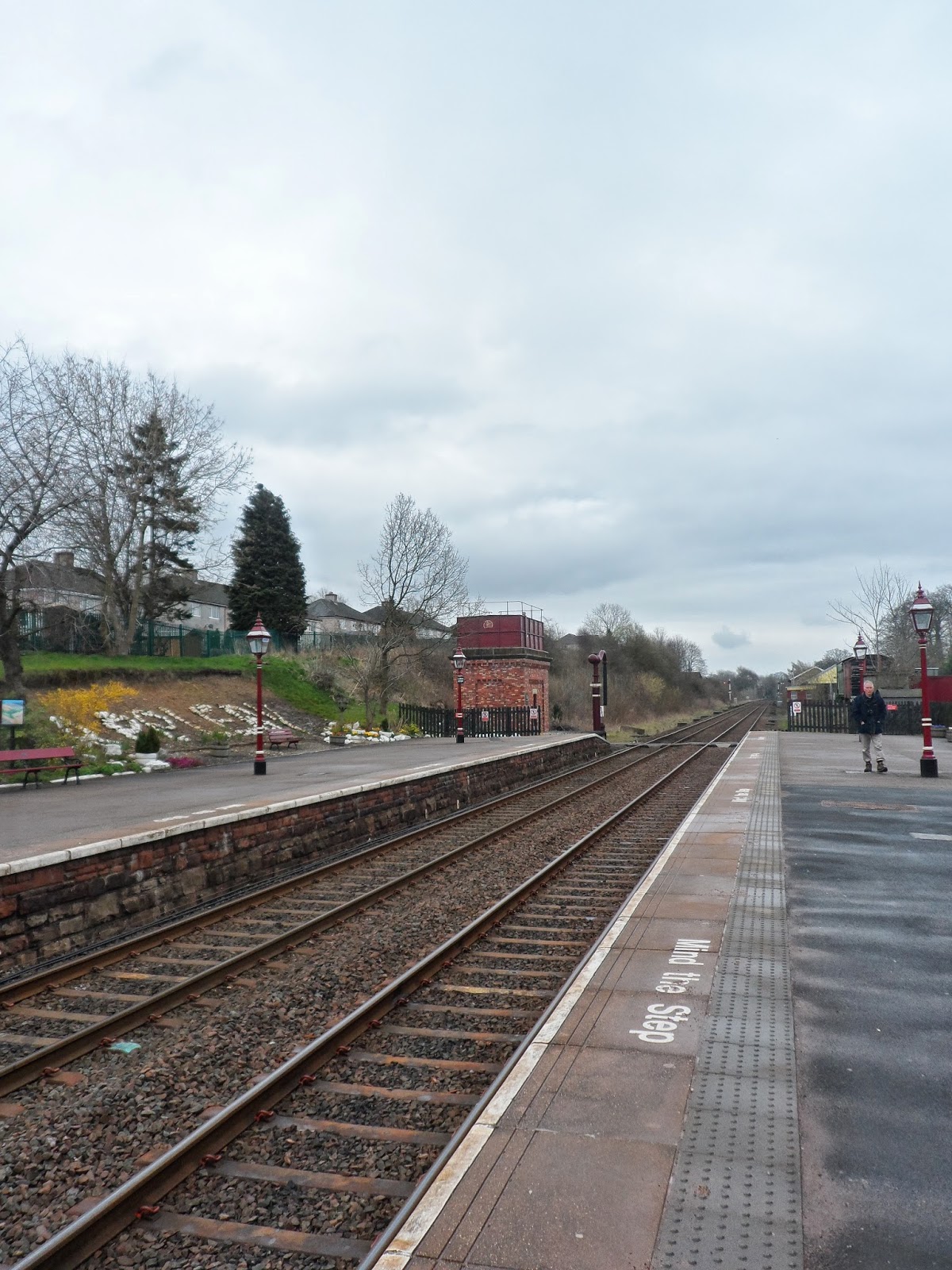 I wasn't the only person to be snapping shots of the station.  A number of elderly gentlemen with serious photographic equipment alighted with me and began clicking away.  I felt quite inadequate with my little Samsung point and snap, until I remembered it's what you do with it that counts.  Did any of these men have a blog that reached literally tens of people a year?  Probably not.  I didn't really look into it. 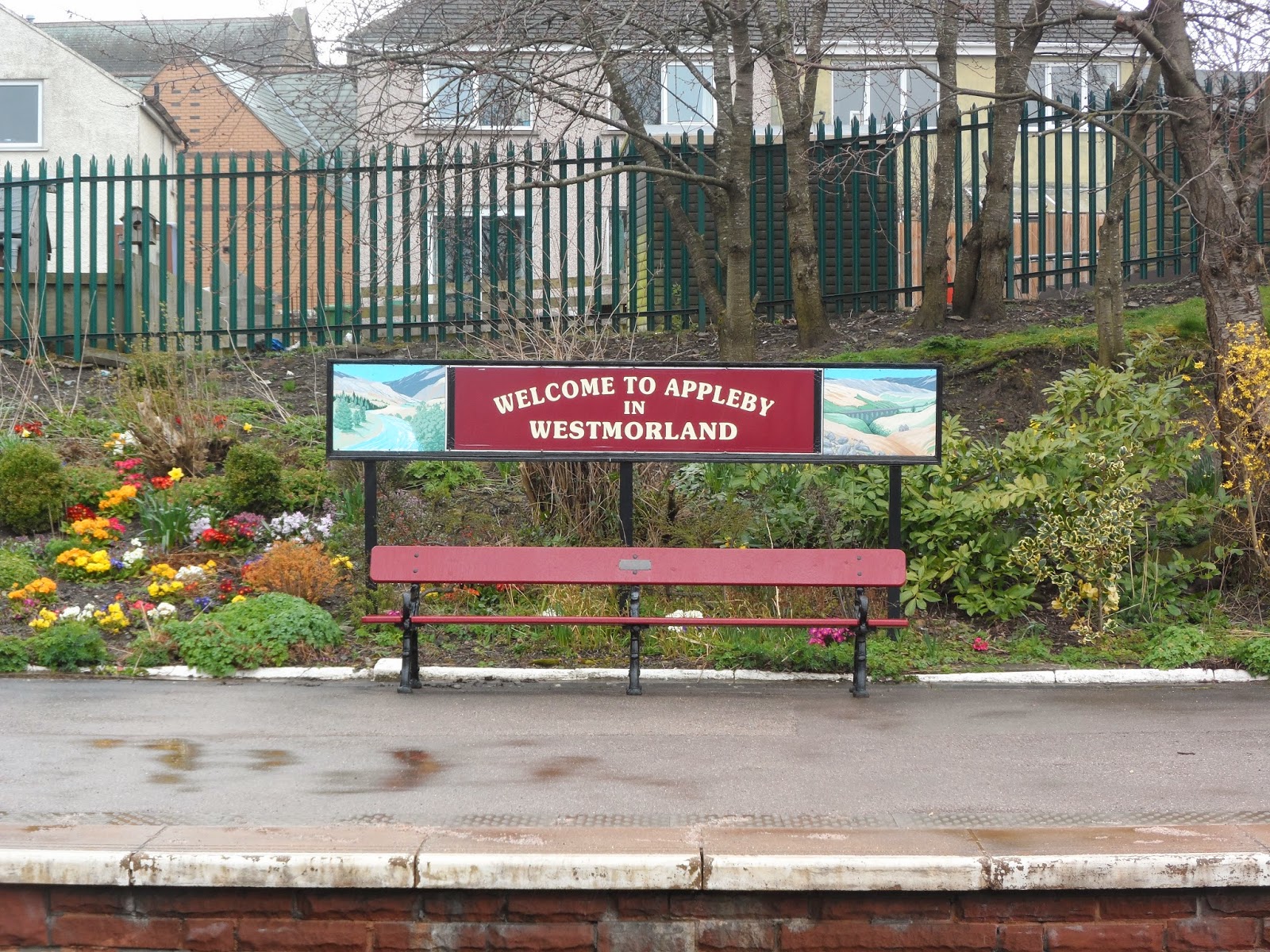 I let them trickle away so I could take some decent snaps.  There was a working platform clock, and the rain seemed to be letting up. 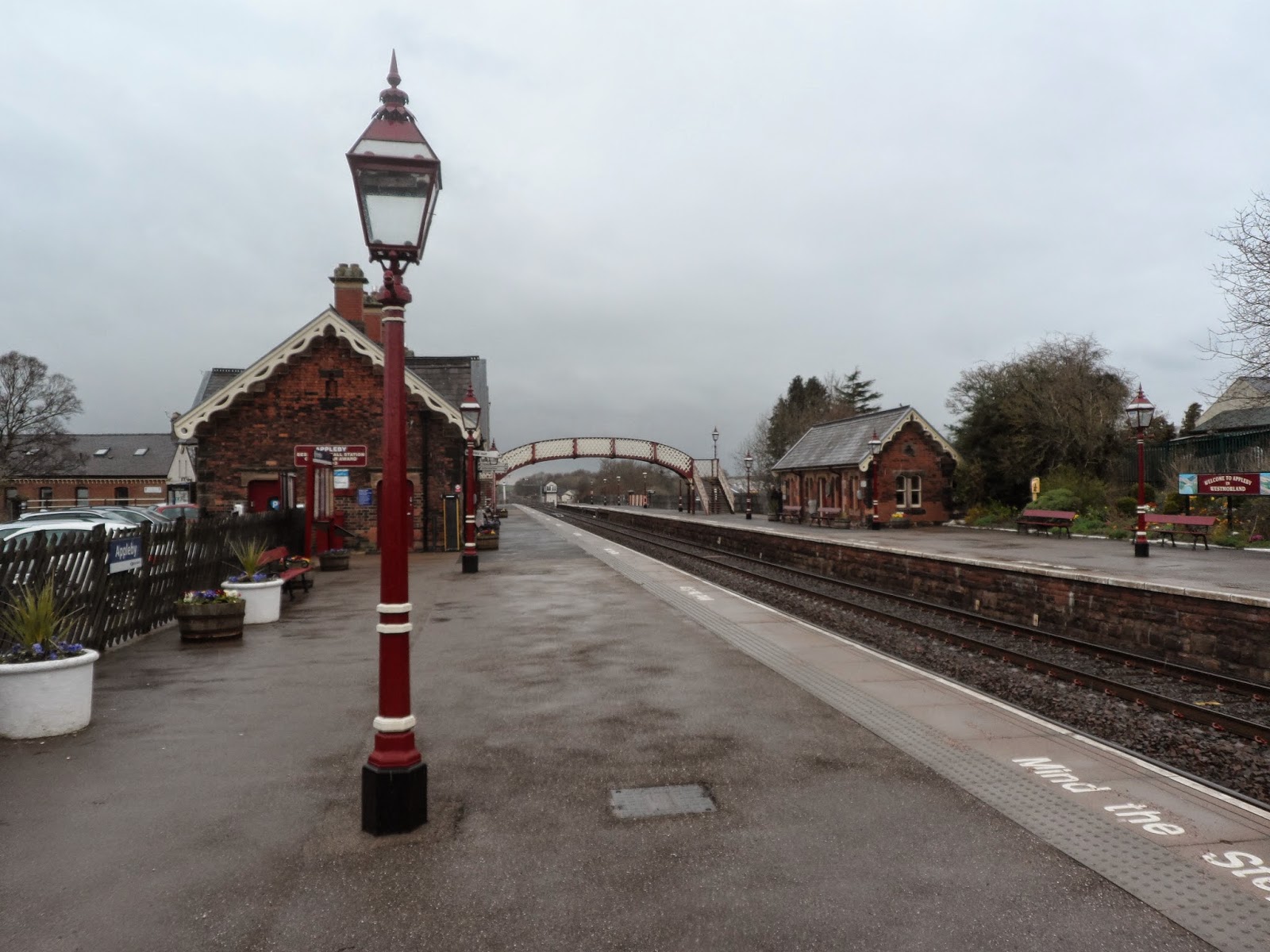 Another plus for Appleby: it had a decent station sign, a proper totem outside.  As you may have guessed, Kirkby Stephen doesn't have one, and it turned out that not many of the stations on the line did.  There were brown heritage road signs but they just said "Station - Settle & Carlisle" with the BR logo.  I can't pretend I wasn't disappointed.  All that effort to restore the oil lamps to working conditions and they couldn't find a few hundred quid for a nice sign outside. 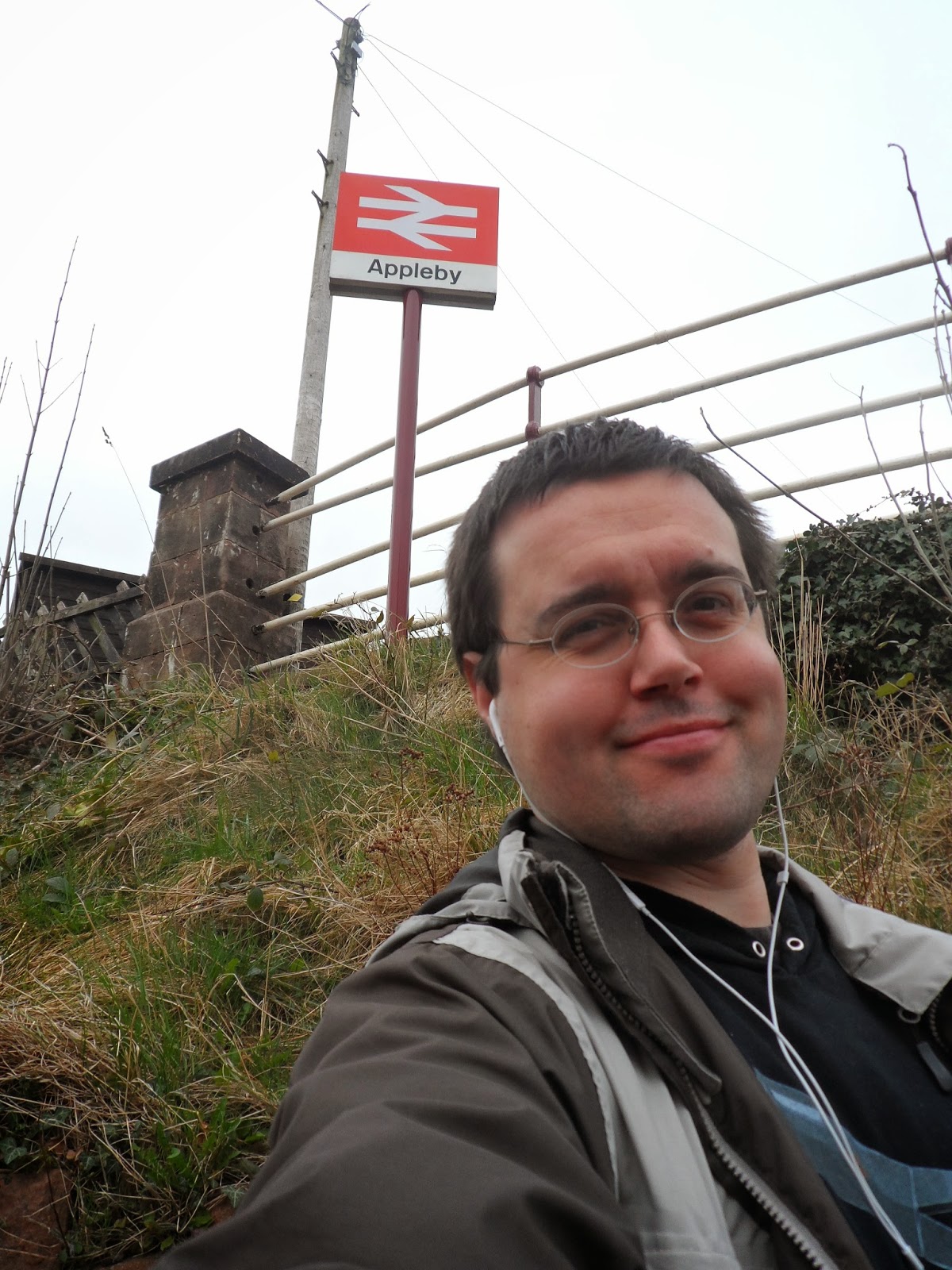 The station's at the top of a hill, looking down on the town itself astride the river, and there's a ridiculously steep set of steps to get down there.  In winter, you presumably just ski down them; I can't imagine anyone would willingly walk on the icy plunge unless they want to recreate that bit in the novel of OHMSS where a SPECTRE guard is pushed to his death down the bobsleigh. 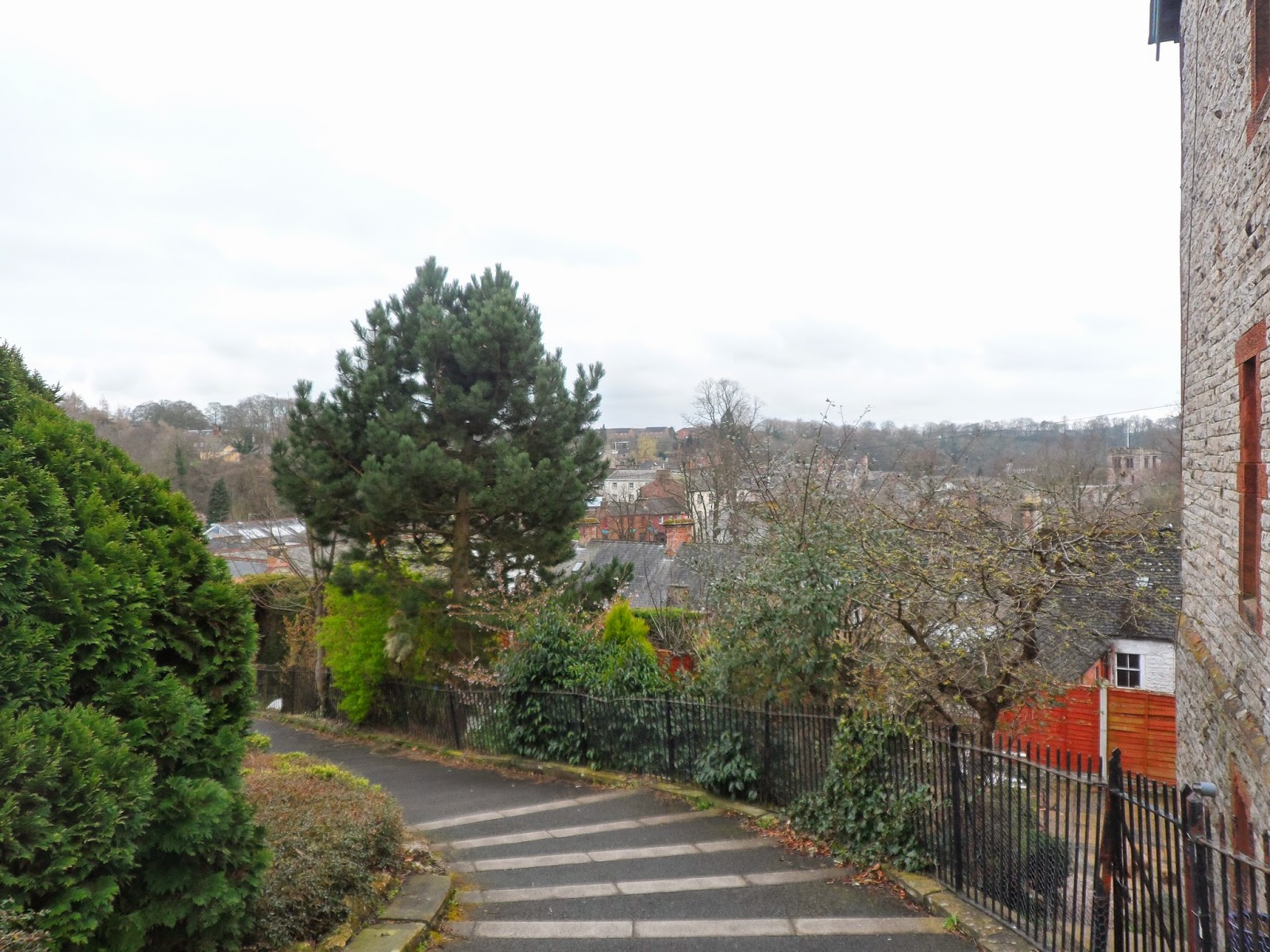 The river splashed against the banks, with inquisitive ducks wandering over to me to see if I was there to treat them, and then a stone bridge carried you into the main street. 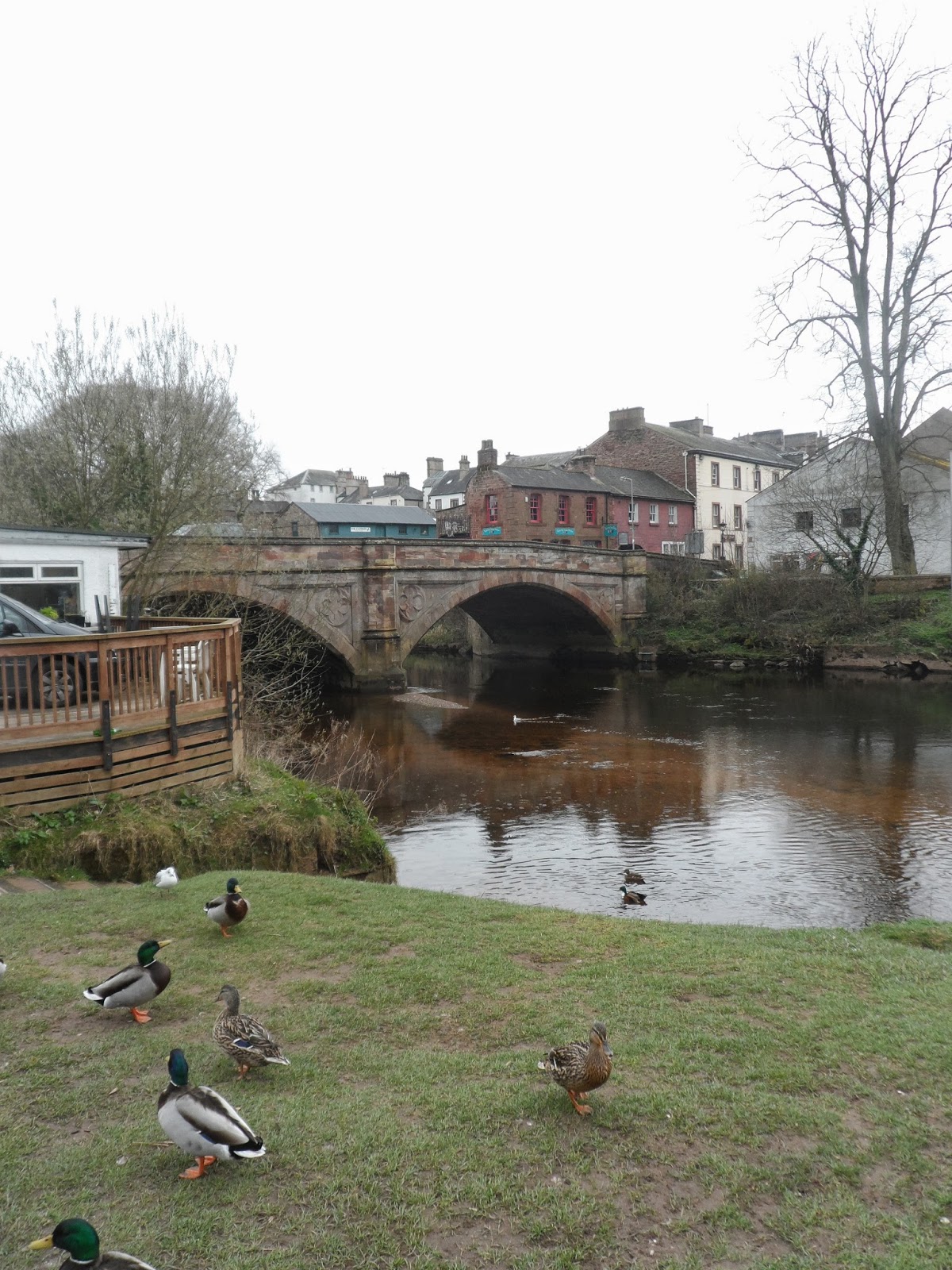 A yellow sign advised No Horses allowed in Town Centre.  At first I thought this was just a quaint marker of rural life, but flicking through a book in one of the gift shops I learned about the Appleby Horse Fair.  Held ever since the reign of James II - and quite possibly for centuries before that - the horse fair takes place every June and is a site of pilgrimage for Gypsies and Travellers all over the UK.  They come to the town in the summer to meet, trade and celebrate.  It was odd to think of this quiet town suddenly gaining thirty thousand visitors in one weekend; sort of like a Romany Glastonbury pitching up on the fields. 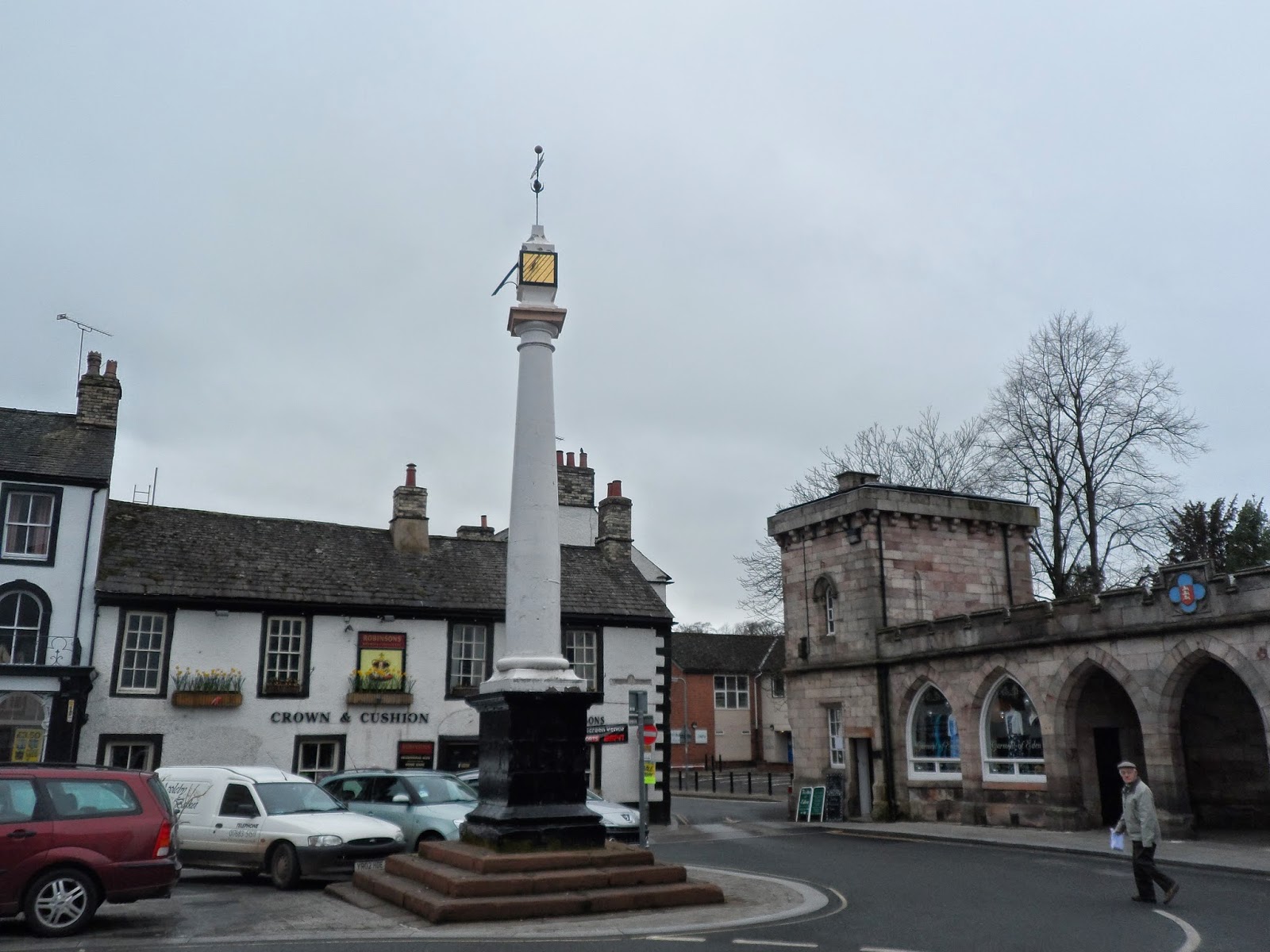 I could see why the Appleby Fair had persisted while others had died out.  The town was resolutely old world; the modern cars and vans seemed like interlopers.  I couldn't pin down a specific era that it belonged to - from some angles it was medieval, from others it was Miss Marple - it just didn't seem very 2014.  The occasional hint of the 21st century, like an Indian restaurant or a website address, seemed like a mistake, like a set dresser had slipped up while she prepared the background for the new Jane Austen adaptation. 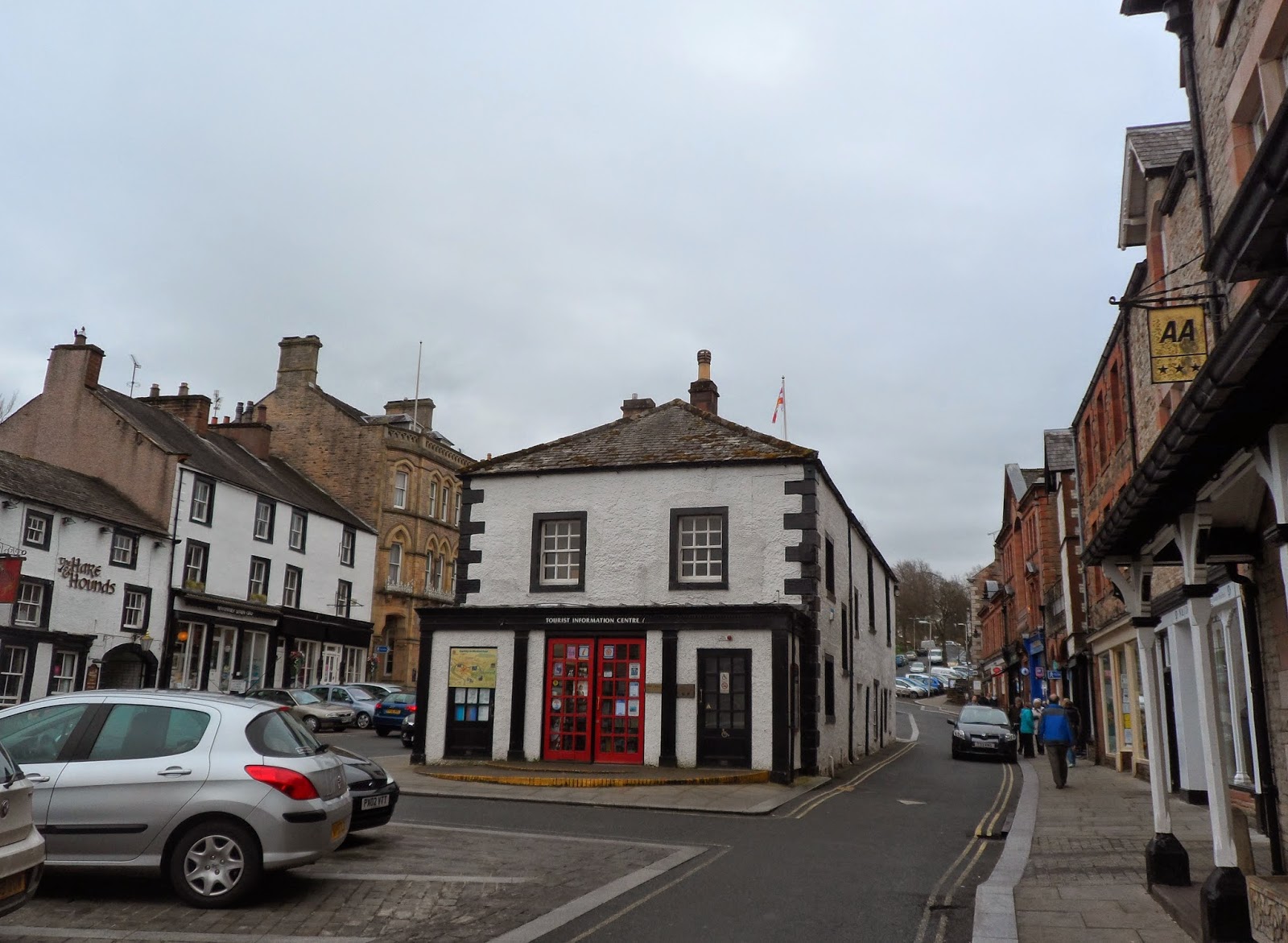 I did a circuit, then expanded my walk to the back street, where I encountered the spectacularly named Doomgate.  Imagine having that as your address!  You'd have to change the name of your house to something appropriately gothic - "oh yes, I live in Black Death Cottage on Doomgate.  Next to Pestilence House.".  Also on Doomgate was a little petrol station, with a sign warning This is NOT a self service pump.  A Mini pulled up and a wheezy old man staggered out to serve it; the driver greeted him by name, and they chatted as he filled her car. 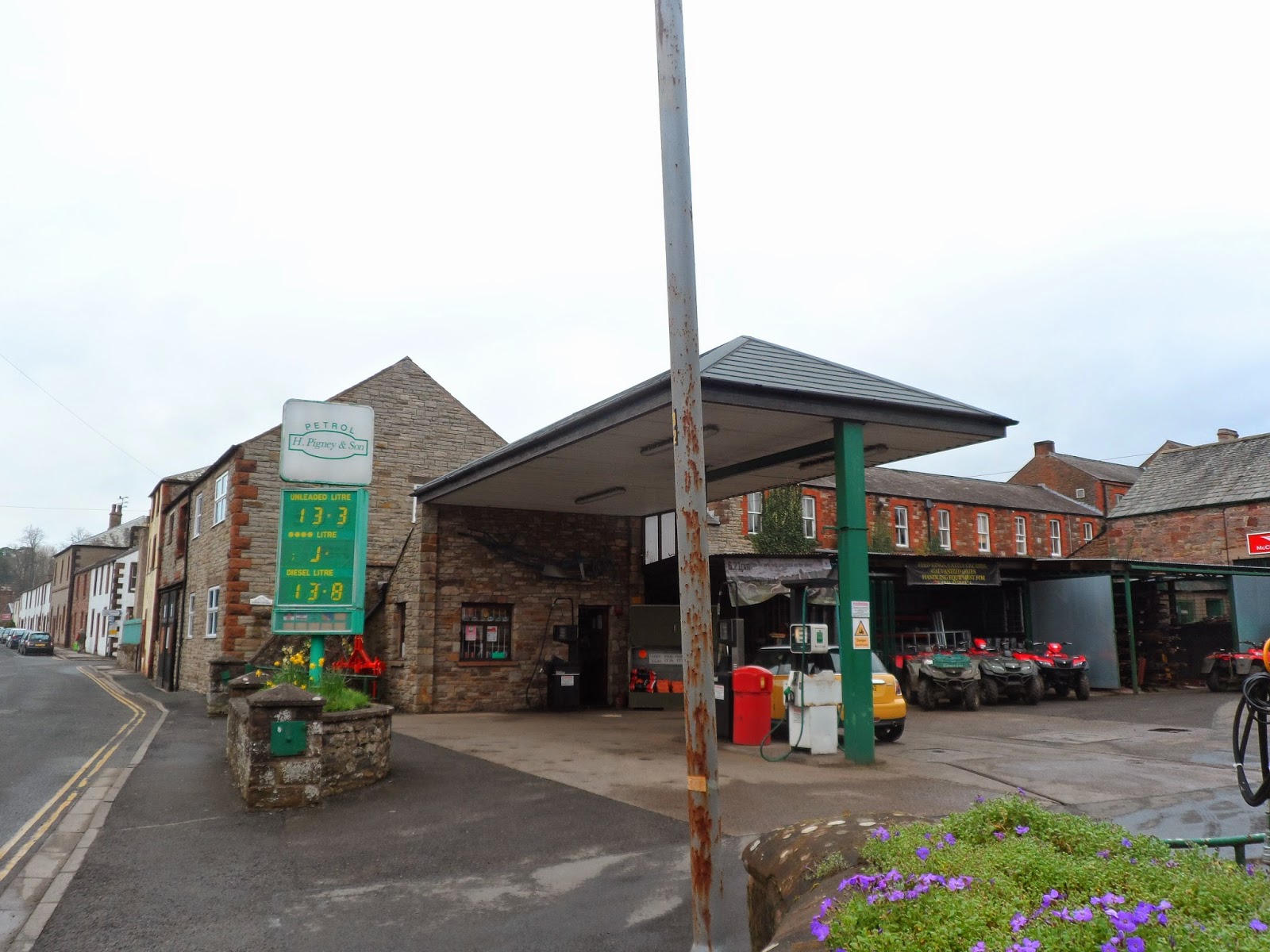 I'd pretty much "done" Appleby by that point, so I found a cafe for a cup of tea.  It was so warm and steamy inside, my glasses immediately fogged up, leaving me to stumble up to the counter like Mr Magoo.  I wiped the precipitation away and took up a seat looking out onto the street.  Two Cockney ladies, probably a mother and daughter, were eating toast across from me, the younger woman occasionally reading out headlines from the Daily Mirror with a tone that said "fancy that!".  There were slate tiles and pansies in jam jars and one of those woven twig hearts hanging in the window.  I don't understand them.  They're like a Christmas wreath for all year round, only not pretty or traditional, just twee. 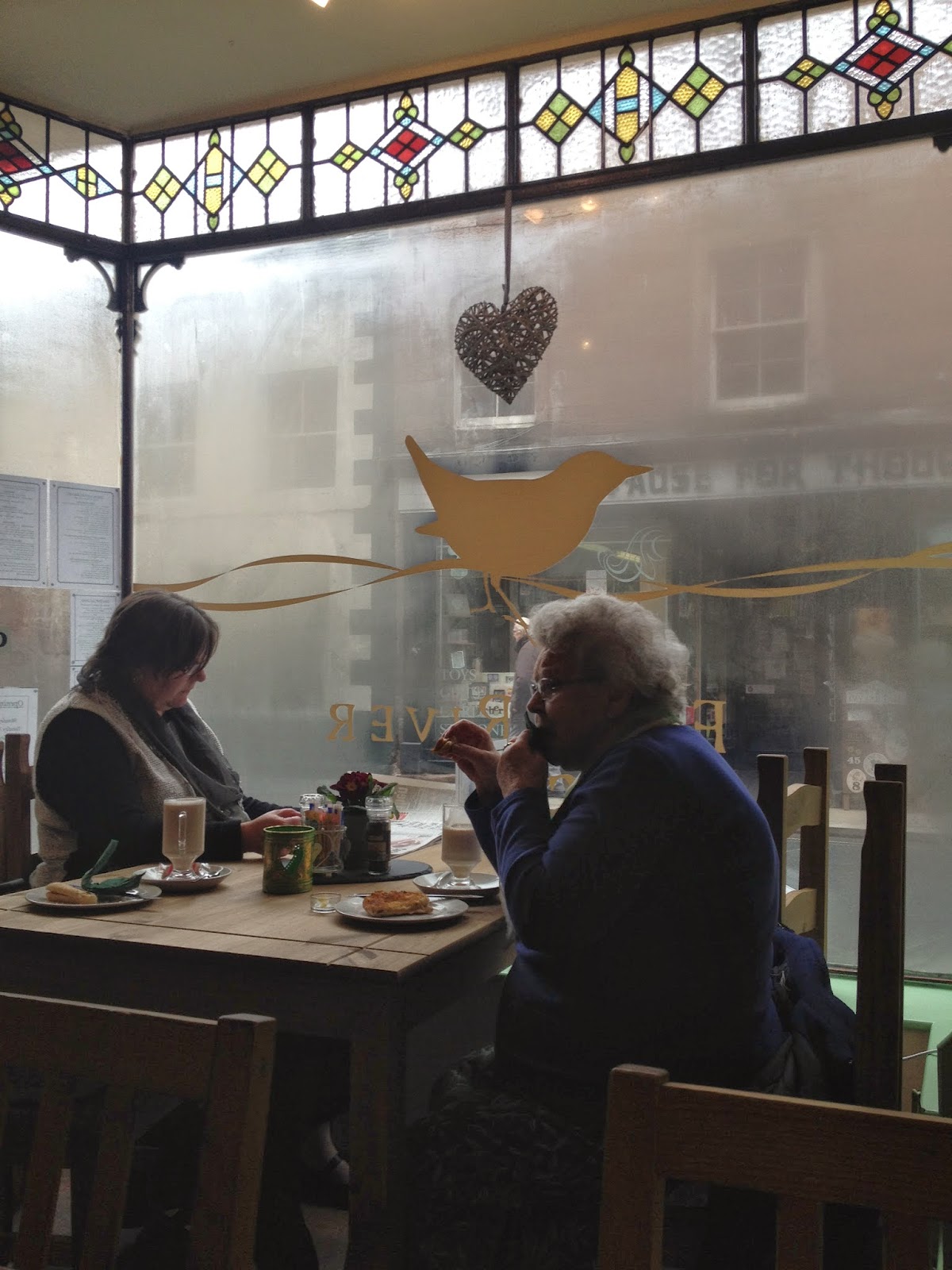 I was feeling stupidly relaxed.  The bacon sandwich, the cups of tea, the lack of any real exercise - this was more like a holiday than a quest.  I was just chilling out.  I had walking to do that afternoon but at that moment it seemed like an alien concept, something someone else was going to have to do, not me.  A dangerous feeling.  The kind of feeling that could see me binning off the rest of the day and just heading back to base for a hot chocolate and a bit of a doze.

Appleby must have sensed this, and on my way back to the station, it sent me something to agitate the blood and fill me with furious adrenalin. 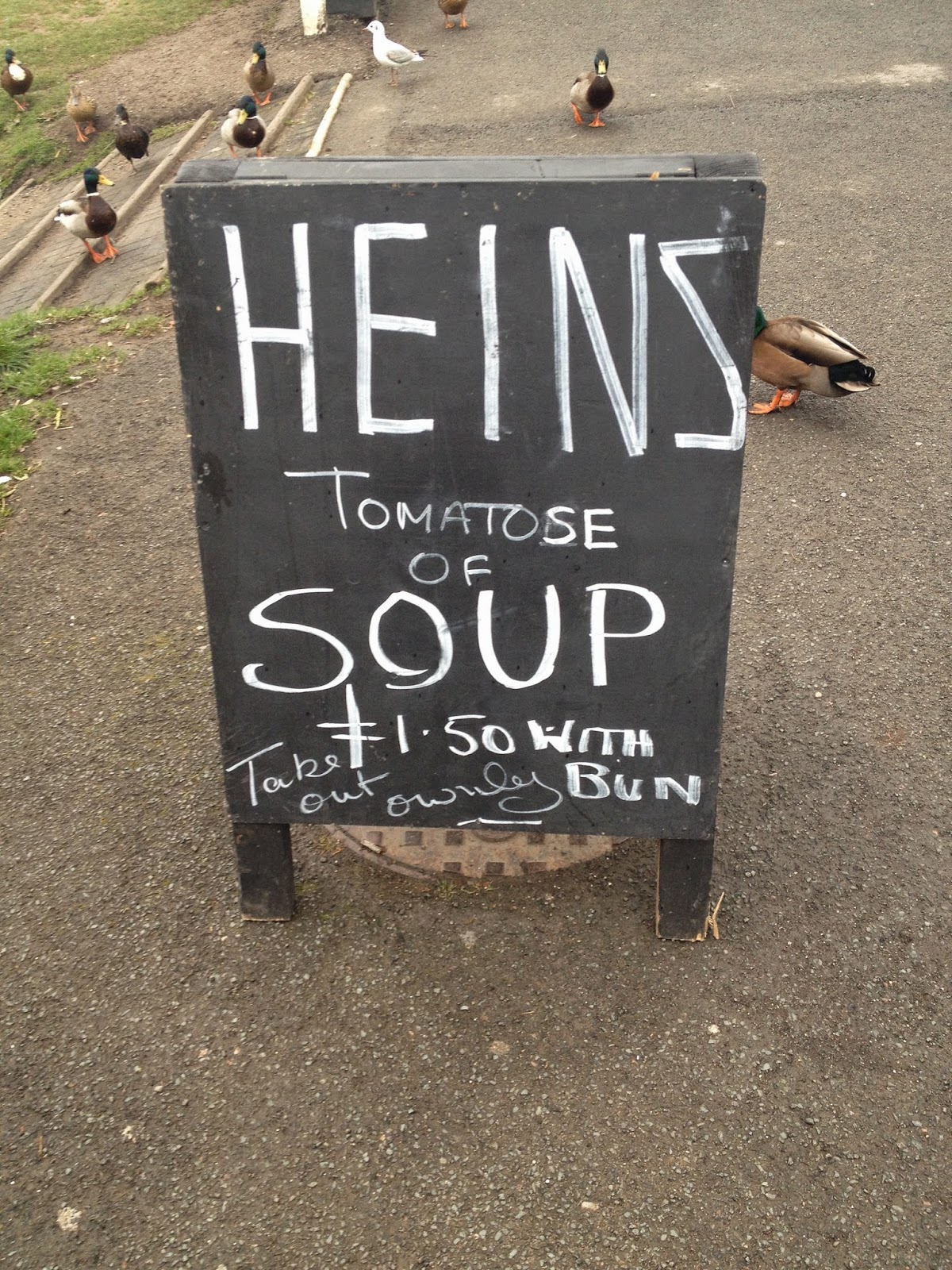 WHAT IS THIS I CAN'T EVEN.  It's so wrong, so very very wrong, that I'm almost in awe.  I'm a person who gets unnecessarily riled up about misplaced apostrophes; you can imagine how this crime against the English language gripped my pedantic synapses.  Actually, is it English?  "Tomatose of soup" certainly bears no relation to any English sentence I know.  The "ownly" is like a burning spike through my soul, and as for the back to front Z in Heinz... I'm going to be generous and suggest that perhaps the person who wrote this sign was dyslexic in some way.  Not too generous, because if you have a learning disability, you get someone else to do the signwriting.

Filled with the rage of self-righteousness that only the most pedantic can feel I remounted the hill to return to the station.  As a further tribute to Appleby's mysterious magic - perhaps the Gypsies have a point? - I found another completely incorrect signboard on the platform, advising me that "Trains are operated by Northern Spirit" - Northern's predecessor for the franchise, and a company that hasn't existed for about 14 years.  Kudos to Northern for their excellent job photoshopping the old train company's logo out, though. 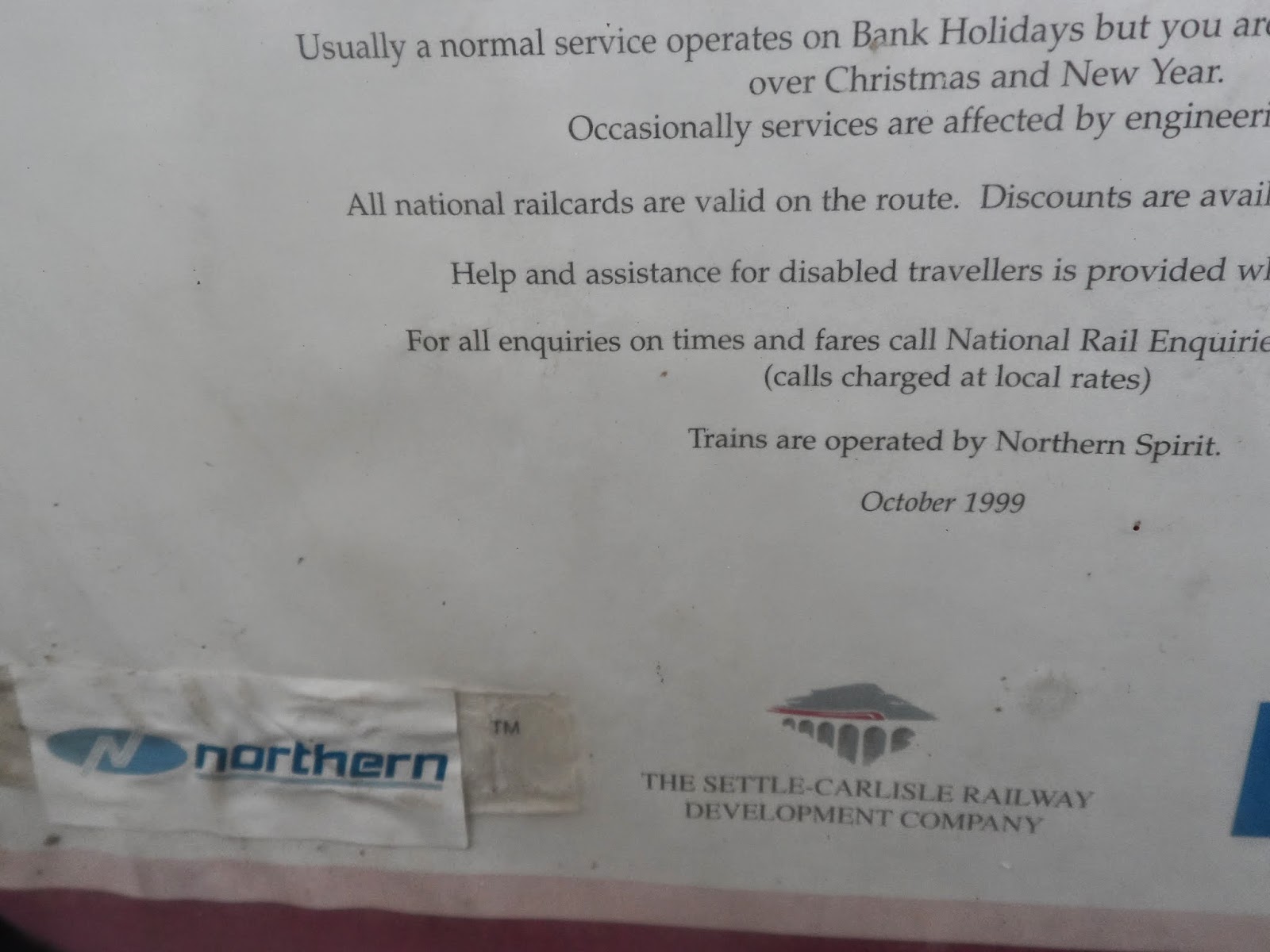 Seamless.
Posted by Scott Willison at 12:03

That's a great analogue photoshop there. However, considering the central logo is for the Settle-Carlisle Railway Development Company (that's a mouthful), I presume it was them who did it rather than Northern themselves, though I could be wrong of course.