The problem with these week-long jaunts is I have to stay somewhere else.  I'm a total homebody.  I can go days without leaving the house and that's fine with me.  I have my telly, I have the internet, I have a kettle to make tea.  I hear retired people complaining that they go days without seeing anybody and all I can think is, "you lucky sod."

My usual solution is to find a Travelodge somewhere, because they're blank and impersonal and I don't need to get involved with anybody.  No breakfasts, I know, but there's probably a McDonald's or something nearby.  It's clean and cheap; that's enough.

I'd planned on a Travelodge this time, until I was doing some research on the Settle & Carlisle website (yes, I do actually do some research before I write this load of old cobblers) and I spotted this:

It turns out that the railway trust have restored some of the stations on the line and turned them over to self-catering accommodation.  At Kirkby Stephen, the station's been split into two cottages, the Platform Cottage and the Booking Office Cottage.  I checked the availability and it turned out the Platform Cottage would be available for the week at a reasonable cost, so that was it: a week in a railway station. 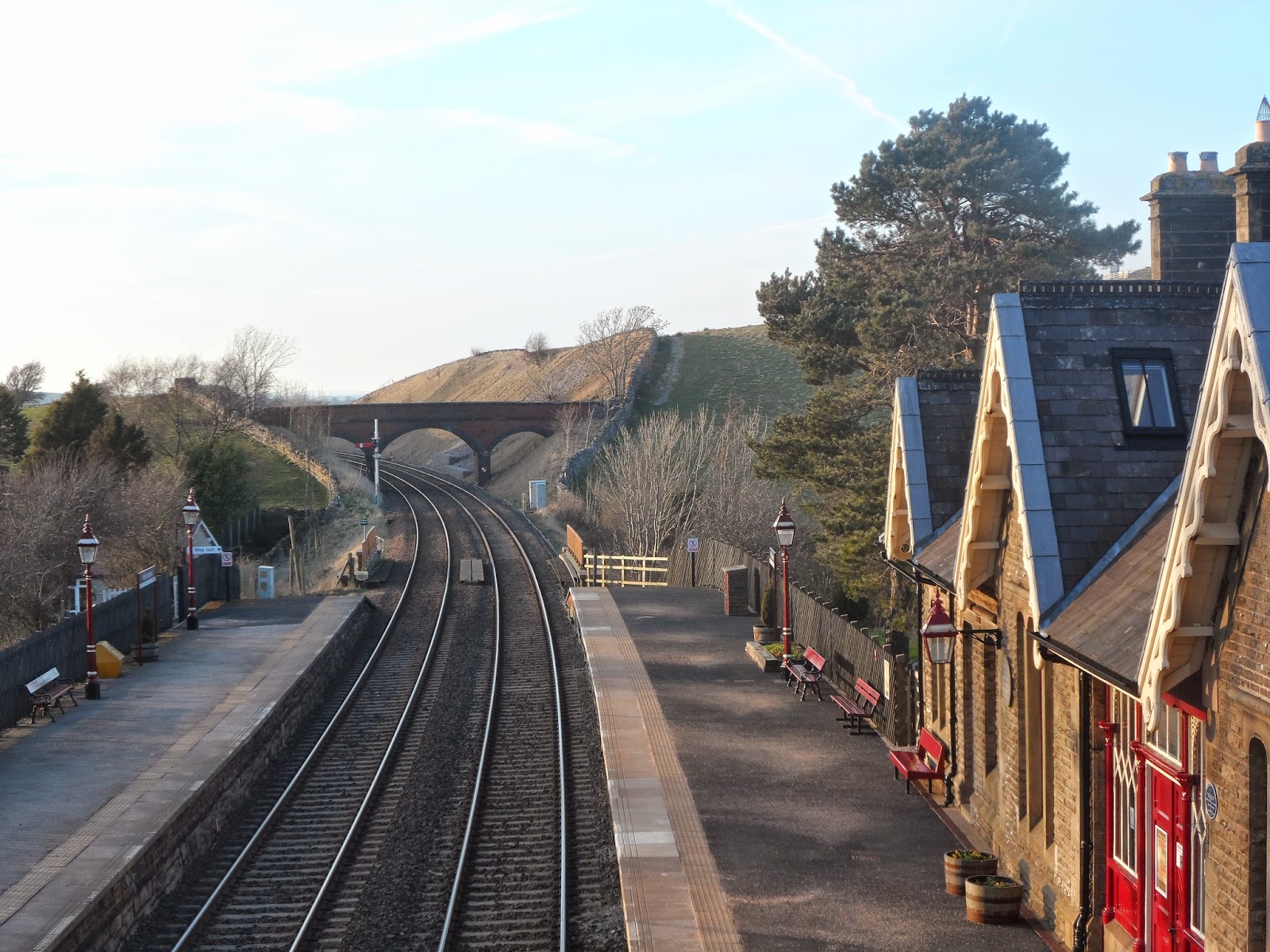 I was met outside by Susan, one of the caretakers for the station house, a jolly lady in an orange apron who nipped across the road from her cottage to let me in.  She walked me through the Platform Cottage's features, its furnishings, how to operate the immersion and so on.  I wasn't really paying attention, I have to admit, because the whole place was just gorgeous. 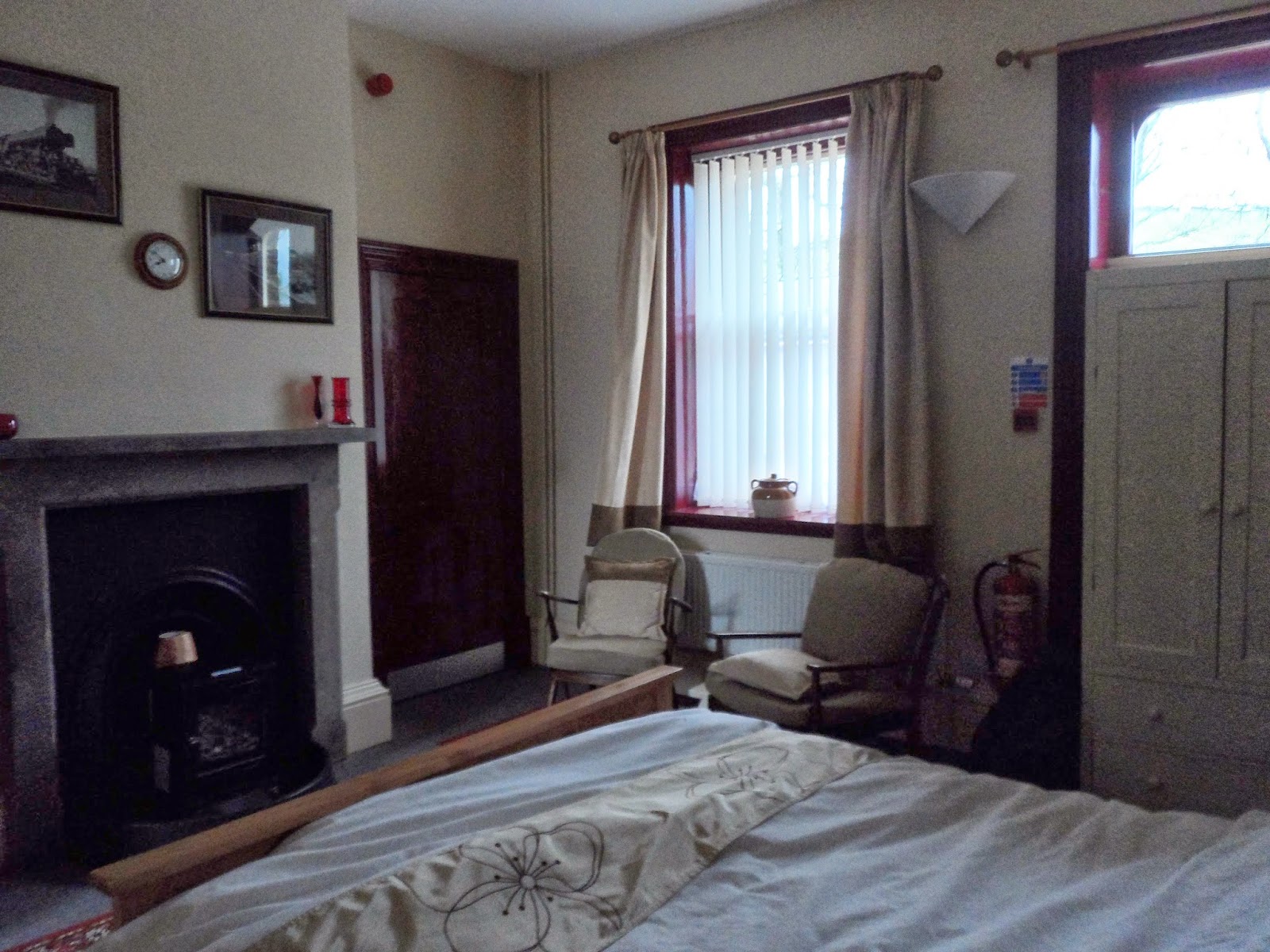 The cottage has been done out to a fantastic standard.  There's comfortable furnishings, plenty of space, and it's clean and warm.  Downstairs is a bedroom with en-suite, featuring quite possibly the softest bed I have ever slept in, plus a kitchenette so that disabled users can use the cottage.  The windows look directly onto the platform.  I made sure to leave the curtains closed when I came out the shower, but really, it wasn't much of a problem.  Kirkby Stephen isn't a busy commuter station; I saw at most a dozen people waiting for a train.  With the thick double glazing the entire Band of the Grenadier Guards could have been outside and I wouldn't have noticed. 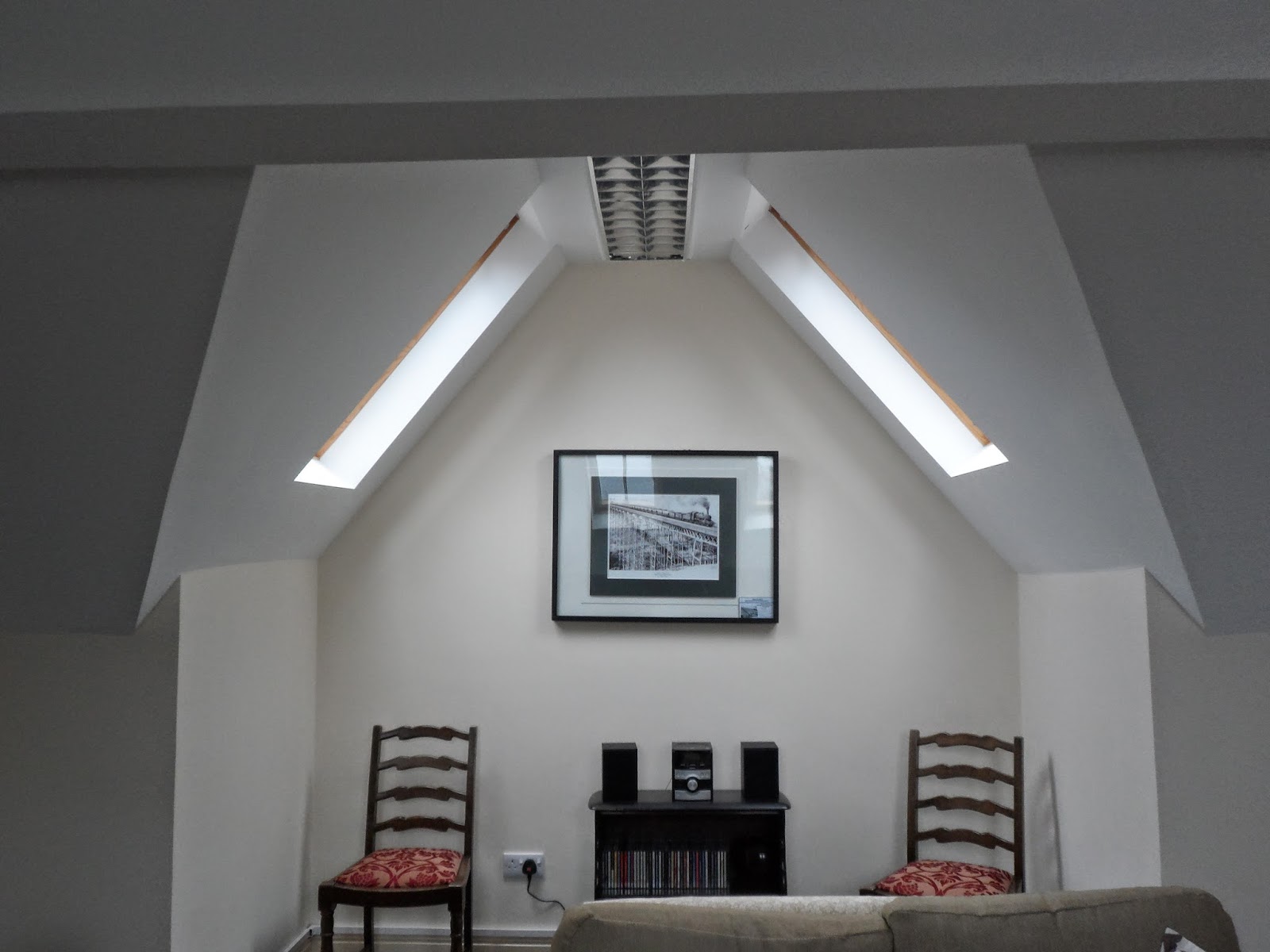 Upstairs are the more extensive living quarters: another bathroom, a larger kitchen, and a living room.  There's also a "dorm", with four single beds, meaning you could cram six people into the whole cottage.  It wouldn't be a strain - the place is just that big.  Susan showed me the entertainment options - a VCR and DVD player, a stereo, Freeview.  There were some CDs - a heavy emphasis on Cliff Richard and Boyzone - plus a selection of films and railway videos.  There were books, too, and a stack of railway magazines - "they've started building up again," Susan sighed, as though they were a natural hazard in the house, like a colony of bats.  She was so lovely, I spent the rest of the week feeling guilty whenever I did anything even remotely dirty.  I hung up the towels with far more care than I would in a four-star hotel, and I made my bed and wiped my feet and generally acted as though she might pop round any minute to check up on me.  Perhaps hotels should consider introducing you to your chambermaid when you arrive; once there's a face to the person who'll have to scrub the toilet after you, it's harder to be truly disgusting.

My only complaint about the living quarters is they were tucked in the eaves of the house.  It meant that none of the windows were actually angled at the track, and even if they were pointing in the right direction, they were too high for you to be able to see anything.  The exception was a window in the kitchen, out of which you could see the sidings and the signal box; there was a special platform here so that you could peer through the glass like a meerkat for as long as you wanted. 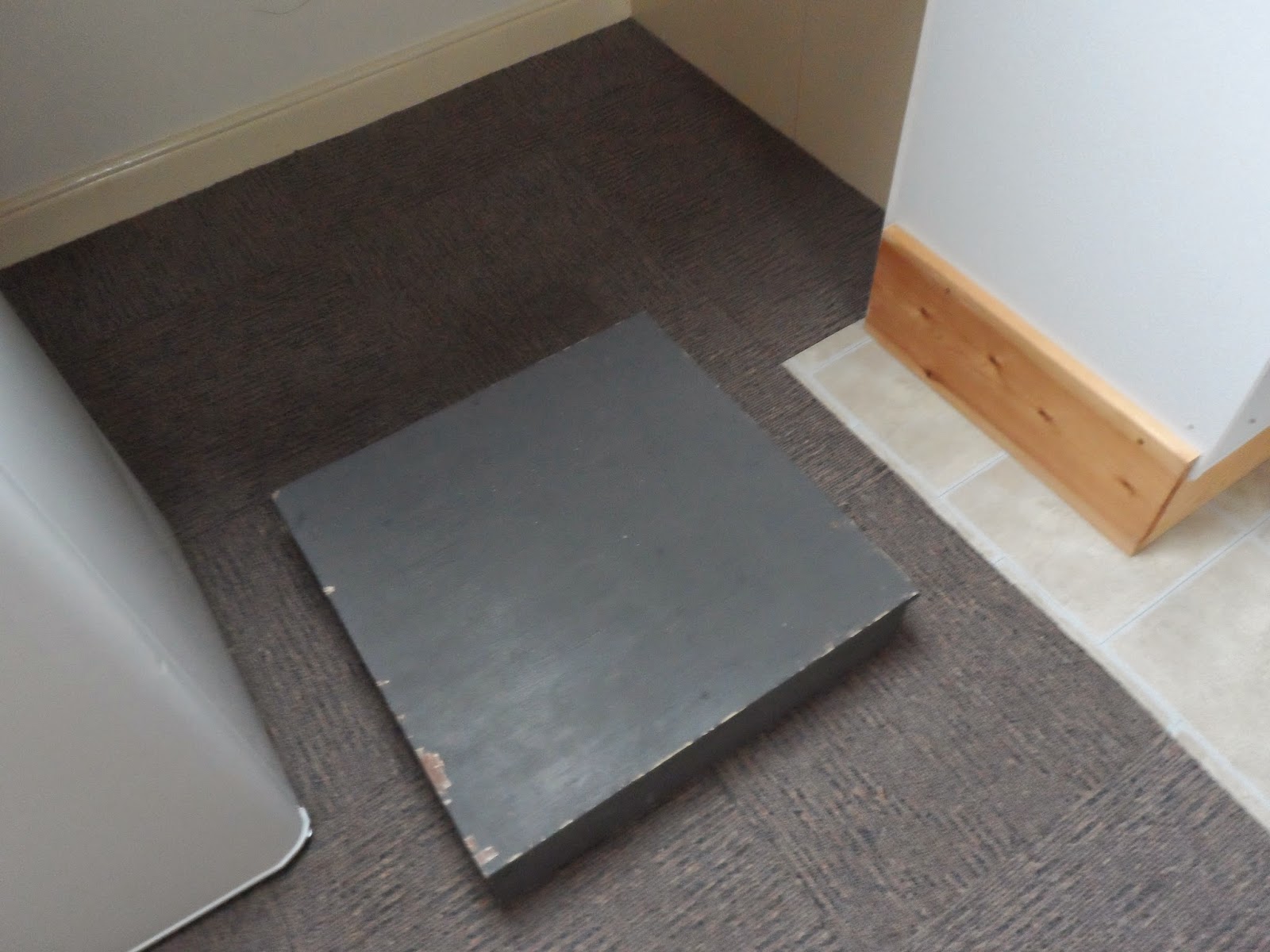 After Susan left I wandered around, marvelling at just how lovely it all was, and how it would be all mine for a week.  It was Monday evening and the sun was casting a final rose pink glow over the hills.  I wandered out onto the platform in my socks with a mug of tea in my hand just to take it all in. 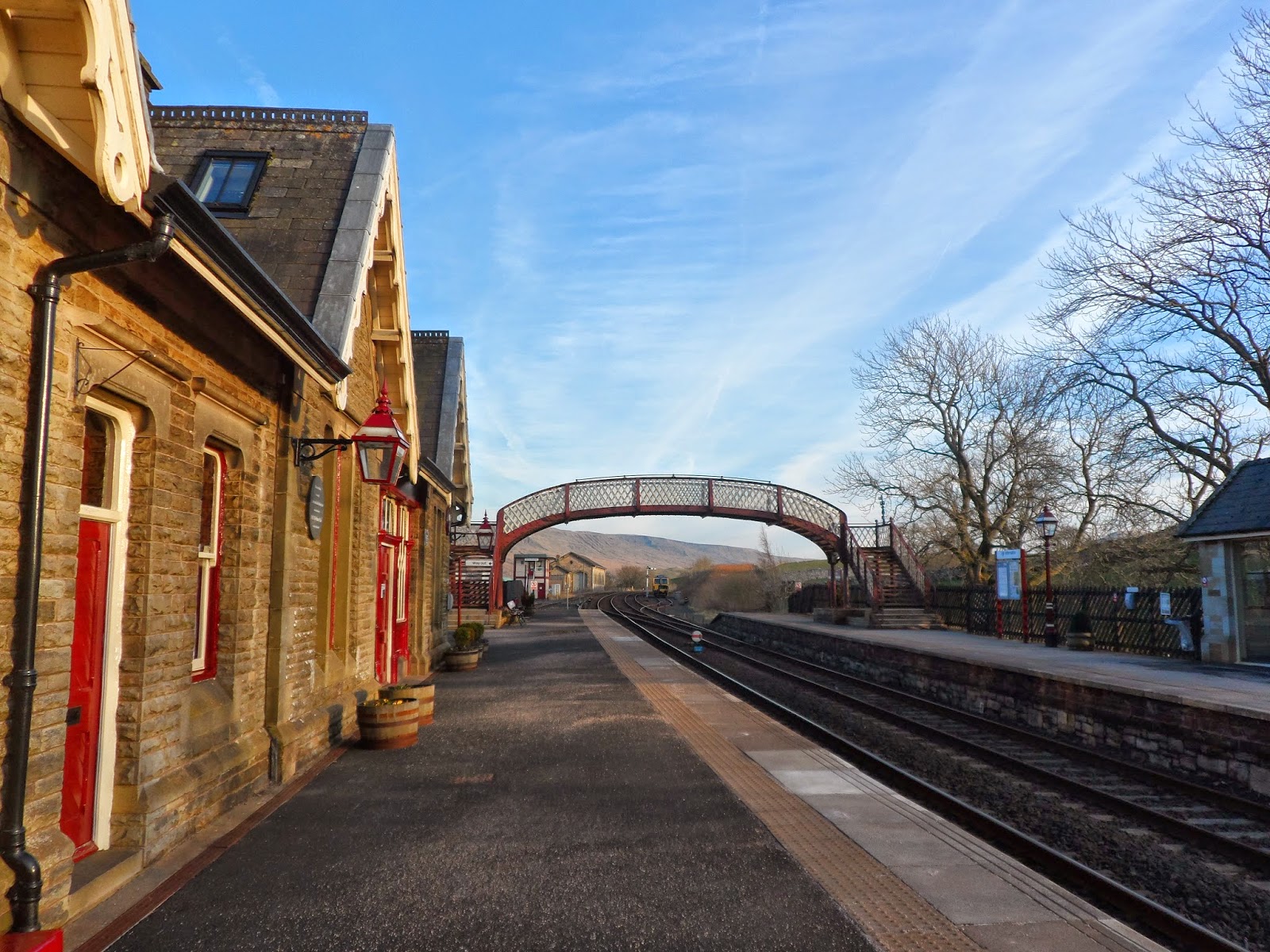 At track level, the station's painted in its original Midland colours, making the Northern Rail purple nameboards particularly incongruous.  I imagined the Purple Gang gnashing their teeth, itching to clamber all over those red doors with a pot of violet paint. 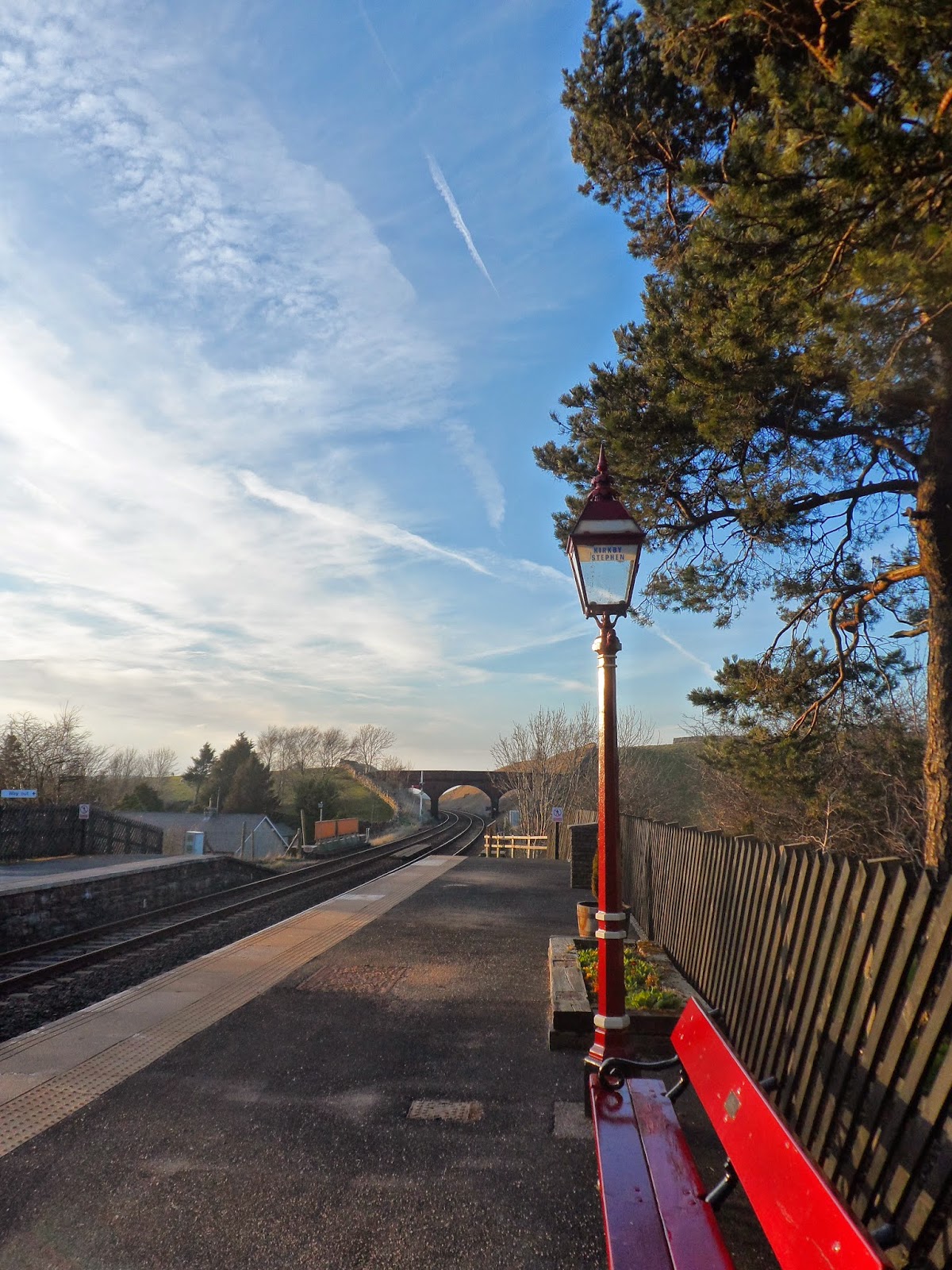 Everywhere I looked there were pretty little features to catch my eye - the lamps with the station's name in it, the footbridge, the sturdy looking waiting shed on the opposite platform.  Behind it all was those incredible skies and the wide, brown and green hills of the Pennines. 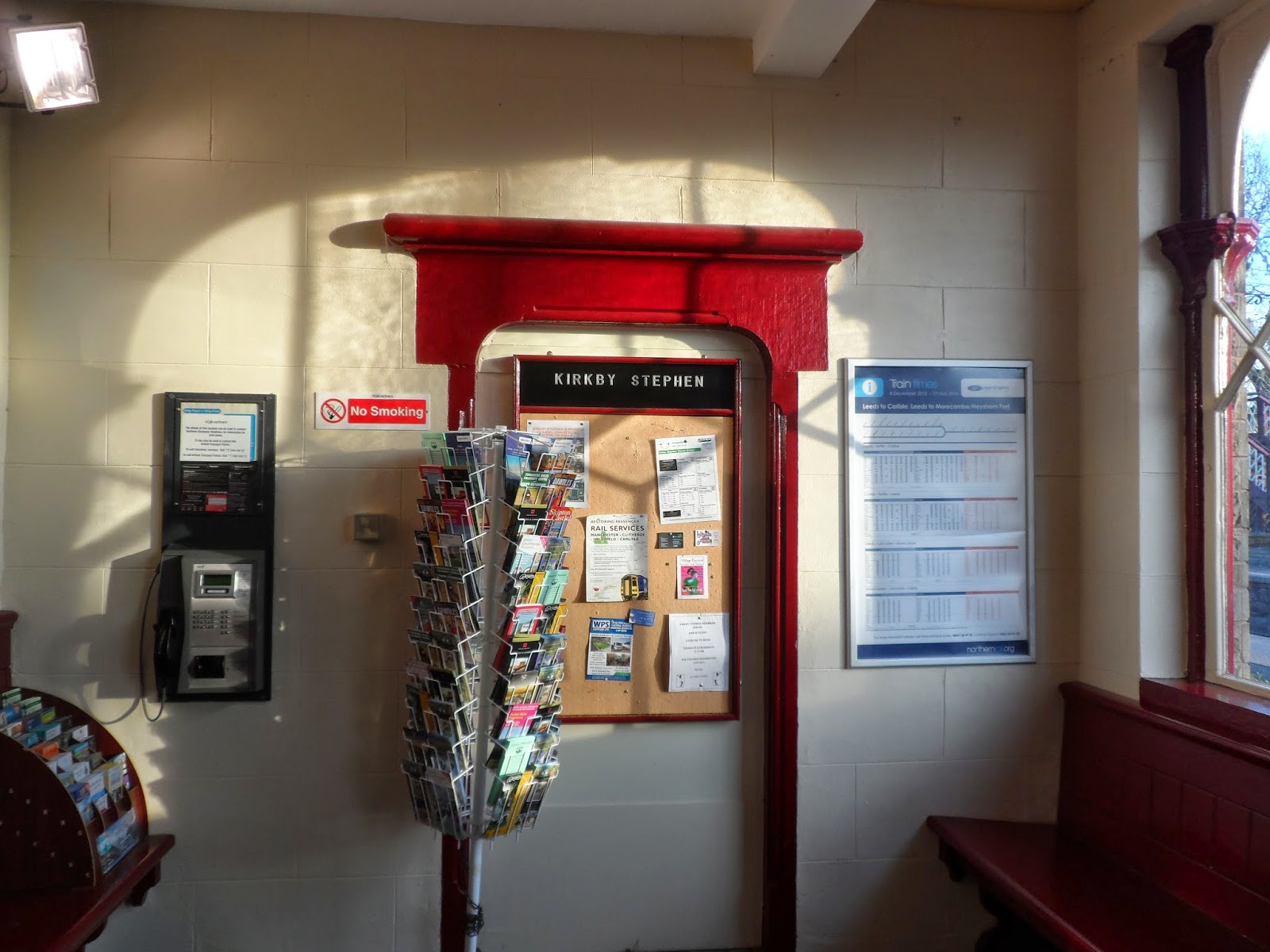 I slept soundly all week, with the only irritation being the occasional freight train parping its horn at 1 in the morning.  Even then, there was a romance to seeing the white light of the station broken by the rapid passage of the train.  A shadow play across the bedroom ceiling, then the silence fell again, total silence. 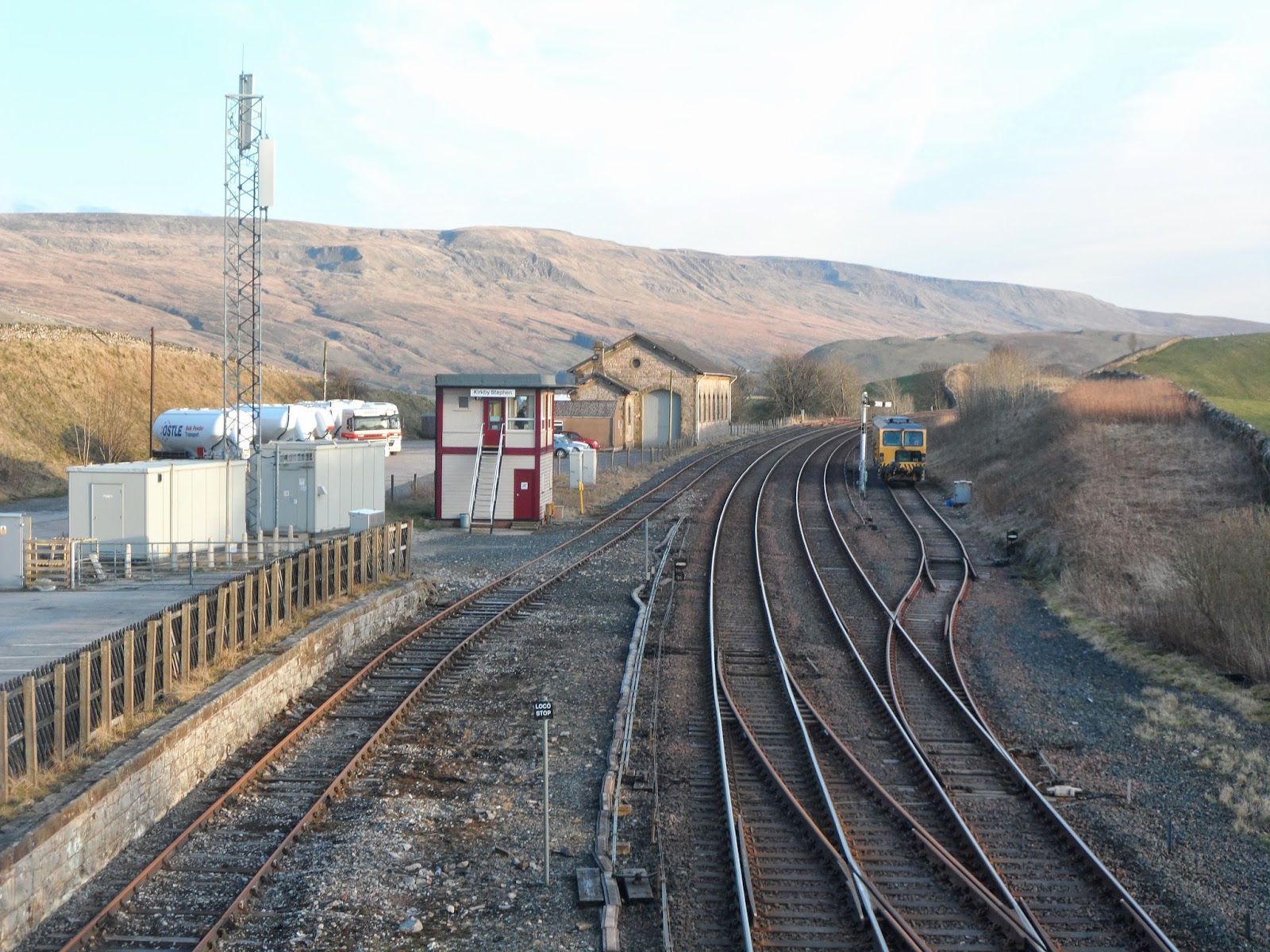 I'd have loved to have been there in a snowstorm, watching trains pass through from the bedroom window with a hot chocolate in my hand.  White canvasses a purple train can speed through.  Instead I just enjoyed sprawling over the sofas while the rain bounced off the Velux windows, eating spaghetti and flicking idly through the tv channels.  Just like home only, you know, with some trains attached. 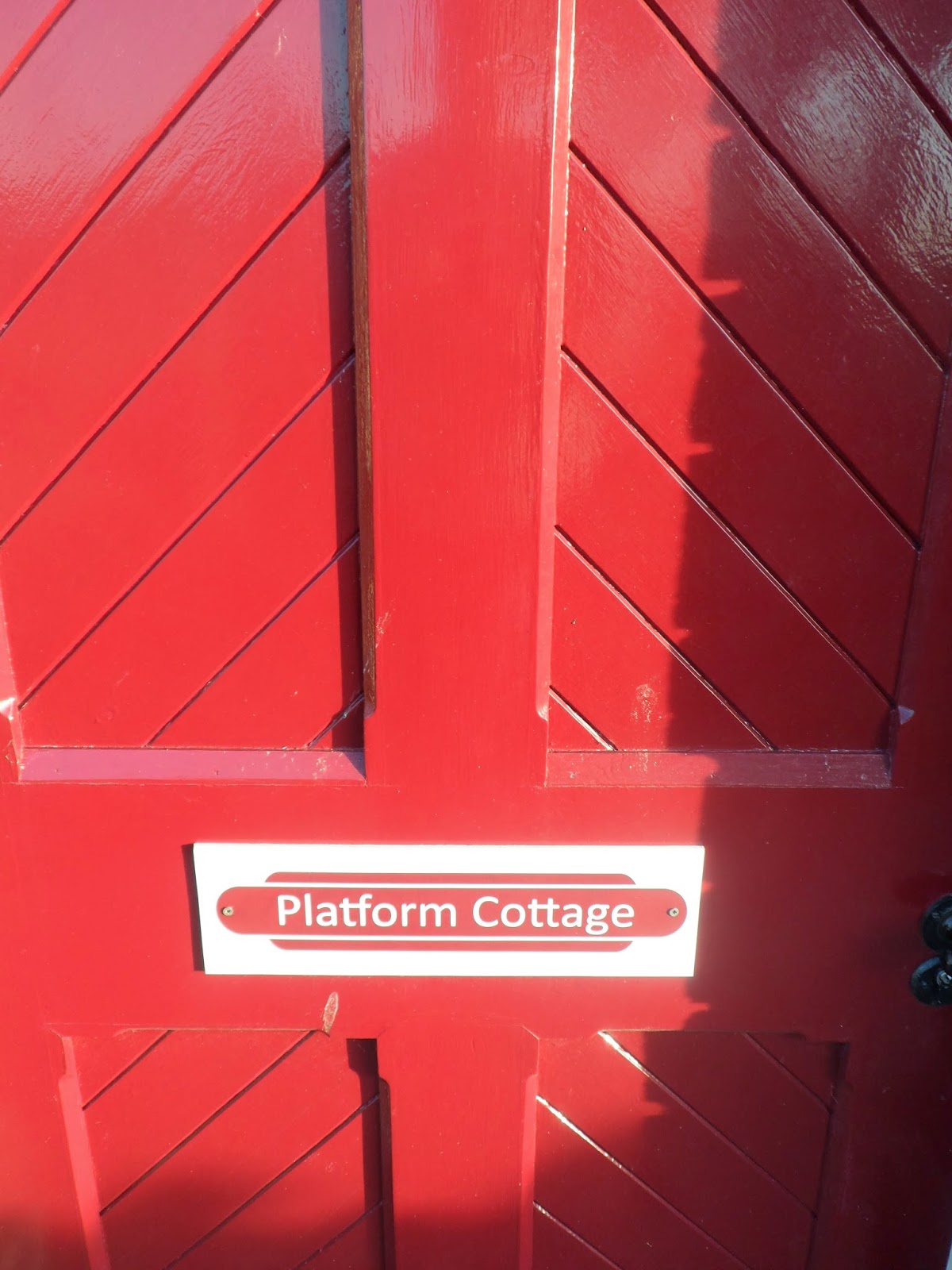 If you want to stay at Kirkby Stephen - and you should! - you can find the details here.
Posted by Scott Willison at 09:30

You weren't tempted to stay at Dent station then? (I guess there's a few more shops around Kirkby Stephen than around Dent station, which isn't actually in Dent)

I am insanely jealous of nearly all of this, but above all getting to drink tea in your socks while standing on the platform. That's living all right!

I didn't realise Dent was available to hire until I visited it. I was a bit disappointed, but Kirkby Stephen was gorgeous.

Absolutely. Also, Dent may have put more of a dent in your wallet more than Kirkby Stephen looking at the price list.