Too Much Of A Good Thing

Part three of the Bishop Auckland branch: part one is here and part two is here. 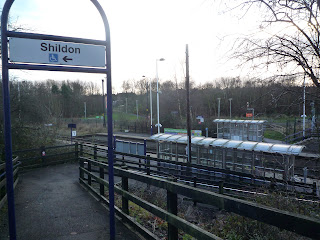 And on the surface, it looks like just another railway station.  Two platforms, two shelters, a couple of tracks.  Nothing out of the ordinary.

Then you spot the big glowing column behind the station and think "that's a bit different". 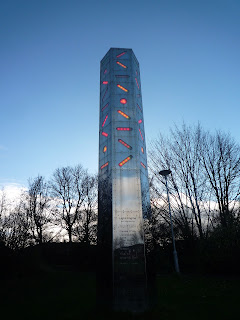 This is interactive art, people; none of that sit back and watch nonsense - take part!  Apparently if you text a name of one of the original engines to a number on the base the lights change.  I wasn't going to do that, because there was no info on how much it cost, and I'm cheap.  I like the idea that a device was invented here two hundred years ago, and is still being used today, and they're commemorating it with a technology that's already going out of style.  In another twenty years kids will be looking at this with far more befuddlement than the third class carriages in the museum.

Yes, there's a museum.  The National Railway Museum has an annexe here to properly acknowledge Shildon's place in history.  Called Locomotion because, again, "museum" is such an off-putting phrase, it threads itself along the railway track, taking in the old works and climaxing in a large new shed full of engines. 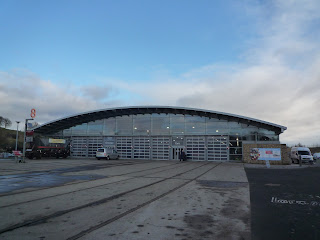 Inside, there was a reverential hush, as though I'd entered a cathedral or a mosque.  It was a temple of trains, a locomotive Lourdes, and talking too much would be deemed tasteless.  Even the staff in the gift shop were whispering.

The shed is laid out with rows of tracks, each stocked full of engines, carriages and other railway stock.  Working your way from one end to the next is exposing yourself to a mass of industrial history.  I picked one end at random and was soon grinning with pleasure at the sight of an InterCity carriage, wedged up against a green Southern railway carriage, behind a steam engine with a Christmas wreath hanging from the front. 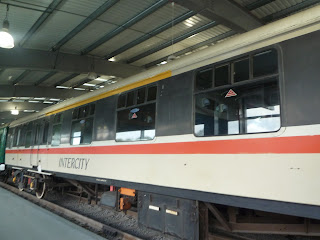 This is the point where I lose half my readers.

After a while, a parade of trains just becomes... a parade of trains.  One steam engine looks much like the next.  It might be a bit taller or a bit wider but it's still a load of iron on top of some wheels.  I lost a bit of interest. 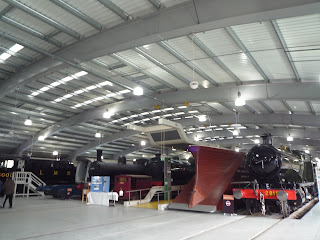 The delights for me were round the edge, the detritus and sweepings from closed stations.  I've long said I'm more interested in stations than trains and Locomotion just underlined this.  I was probably the first visitor to walk straight past an engine so I could coo at a platform ticket machine: 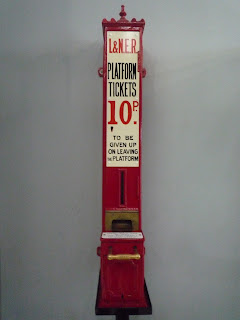 Platform tickets are such a romantic idea.  Paying a little bit of money so you can kiss your wife or husband goodbye.  I know theoretically you can still buy them, but I'd die of embarrassment just asking for one.  I have problems enough buying Day Ranger tickets from people with a computer in front of them, without trying to buy a ticket that's not valid on any train.  Also, of course, in these days of unstaffed stations, anyone can wander around trackside without paying a bean.

I was equally excited by a sign from the Tyne & Wear Metro: 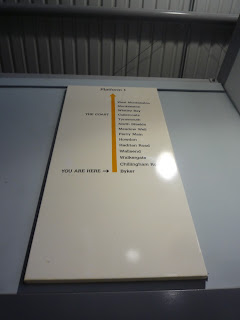 One of the best aspects of this whole Northern Rail expedition is the fact that one day I'll be in Newcastle, and one day I'll be able to ride on the Metro.  That is stupidly exciting to me - in fact it's one of those parts that I'm putting off doing, because I don't want it to go by too fast.  Just look at that font!  Margaret Calvert, you are a genius.

OK, there were some exciting trains.  The APT-E, for example, a British Rail High-Speed prototype that was powered by gas turbines.  That square front, the buff colour scheme, the Buck Rogers-future styling; adorable. 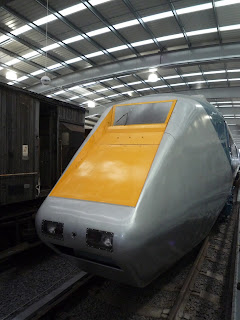 More beautiful still was the Duchess of Hamilton, a throbbing powerhouse of a steam engine.  Built for the route between London and Glasgow, this muscular train called to me: a rare example of an old school coal train matching the elegance of an electric one. 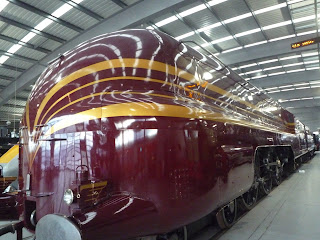 Though I admit part of the appeal is that gorgeous colour scheme. 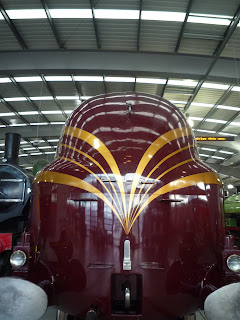 After a while I just felt overwhelmed.  There was so much, engine after engine, histories piling on top of one another, until I had to get an overpriced cup of tea and have a sit down.

It was all very good, and well-presented, if a little bit worthy in places (thanks, NRM, but I really didn't need an exhibition space devoted to your waste water harvesting and your wind turbines).  If you like locomotives you'll be orgasmic.  I was just mildly thrilled. 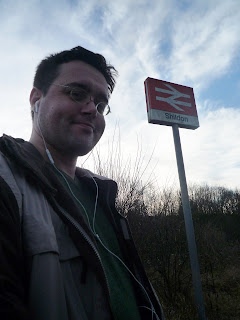 Was the platform ticket machine operational? "10p" does not sound very LNER era.

I thought it might be, and tried putting a 10p in the slot, but it was blocked up. I was disappointed.

I got issued a platform ticket once at...

Those silly wooden (I think) barriers with a bloke waving people with tickets past without paying much attention. I was in Brum and I was seeing someone off, with my own train back to Crewe later on.

My mate waved his ticket, but I didn't think about getting mine out of my pocket. I said to the bloke that I just wanted to see my friend off, and he reached round, pulled out a platform ticket and handed me one. No charge, just handed me a ticket with today's date on. It was a very odd experience, and I have since lost/binned said ticket, but they do indeed still exist, though I haven't seen machines issuing them, and haven't dared ask at a ticket office for one.