The final part of the Bishop Auckland line.  Part one is here, part two is here and part three is here.

I get it Shildon: the railways are your claim to fame.  They're your moment in the sun.  But you can kind of over-egg the pudding, you know?

As I walked round the outskirts of the town, looking for a bus stop, I found repeated reminders of its heritage.  Some, like the "Railway Institute", were genuine relics of its past.  Others, like these gates, had been shipped in with the museum. 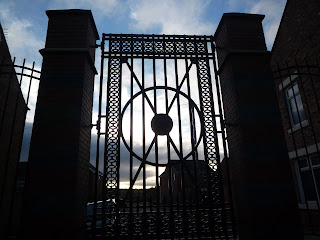 The nearby plaque explained that these were taken from the old Euston station, but were donated to the town.  A nice gesture, though all they lead to was a rather dull Brookside estate.

I finally reached railway overload at a roundabout, where a wagon and a signal were sited next to The Crossings pub.  Enough already! I thought as I took up position in the bus shelter.  It was overshadowing Shildon's other attributes - for example, I also passed Good Buddy's CB Radio & Communication Centre.  I was fascinated.  Was CB radio still a thing in this corner of County Durham?  Were people ignoring the delights of FaceTime and Skype in favour of hunching over a handset?  I imagined a scene like the one in The Brady Bunch Movie, where the radio bursts into life for the first time in twenty years.  It's sort of like ChatRoulette, but without the penises. 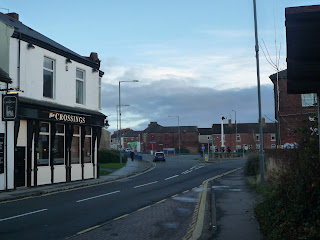 I was sad I didn't have more time to explore the town as I passed through on the bus.  It seemed like a pretty, busy little town centre, well laid out and thriving.  I was particularly taken with the Millennium Arches (sadly unrelated to Jimmy Corkhill's Millennium Arch), erected to show the entrance to the town centre in 2000, and a charming little artefact of the new century.

Our bus rolled up and down steep hillsides, and I was glad I'd not walked.  That had been the original plan, particularly since I'd spotted somewhere called Busty Terrace on the road to Bishop Auckland, but the sun was setting earlier than I thought it would.  I didn't fancy marching down the country lanes in the pitch black. Instead I paid a couple of quid to the friendly driver and let him do all the work. 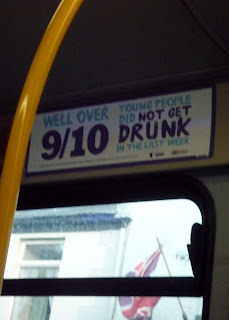 I'm not sure if they're celebrating or complaining.

The bus exchange was behind the Newgate Shopping Centre, and I cut through to enjoy a welcome blast of heat.  On the other side I exited onto the central pedestrian way, lined with all the usual chain stores and banks.  It was ordinary, generic; not without charm, but nothing special.  Better than Newton Aycliffe, worse than Darlington. 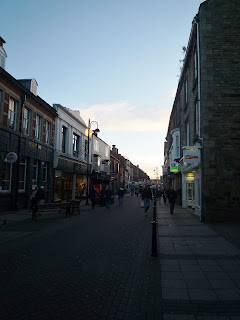 The side streets were more pleasing, with Victorian railwayman cottages and plenty of trees. 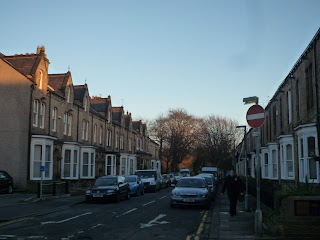 I headed into Beales, attracted by the Lego American Footballer outside and the promise of a cup of tea in the cafe.  It was a classic provincial department store, made up of different buildings knocked together, full of nooks and odd little passageways.  I had a sniff at the Yankee Candle section; there was a gorgeous "Christmas Cupcake" scent, but I would have to be a lottery winner before I spend £20 on something I am literally going to set on fire.

After my cuppa I headed back into the street to search for the railway station.  There was an unexpected pleasure on a corner: a statue of Stan Laurel.  I hadn't realised that the great man was from the town; his parents ran the (now demolished) theatre. 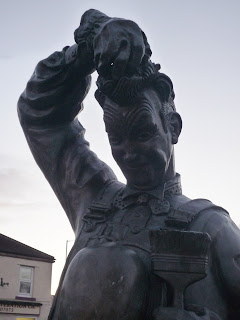 It does look a bit like the artist only knew Stan from the old Hanna-Barbera cartoon, but it's nice enough.

I knew that the railway station would be behind the Morrison's supermarket.  Years of tracking round town centres looking for stations has taught me that giant 1980s retail developments are almost always constructed on top of old goods yards and railway facilities.  So it was at Bishop Auckland, with the little building an afterthought to all the free parking and trolley bays. 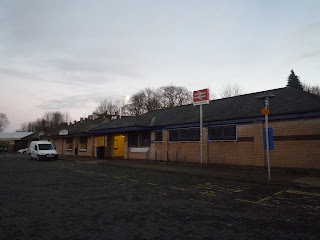 The good news is that the station is growing.  It was adopted by Bishop Trains, an enthusiastic band of locals, who have pumped a great deal of energy (and cash) into revitalising the station.  The new cafe and waiting area were sadly closed when I arrived, but they were good to see.  Even better is the news that Bishop Trains will be reintroducing a staffed ticket office to the station, its first since 1969.  This pioneer of the railways will very soon have a facility we've all taken for granted.

There's also a pleasing mural covering the wall of the station building. 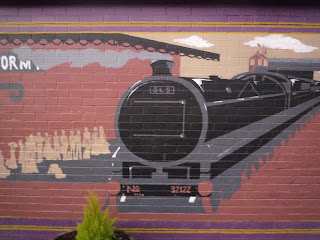 Once there were onward services from here, down a number of branches, but they all closed decades ago.  Now it's the end of the line. 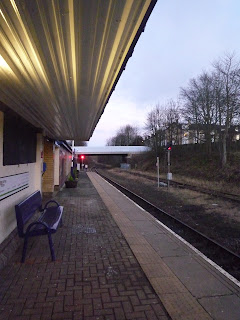 I took a seat on the cold metal bench to wait for my train.  Time to go home.  I had crossed off an entire branch of the Northern Rail map, my first - I should have felt jubilant.  Instead I felt deflated, a sense of "is that it?".  Perhaps the terminus had affected me, the feeling of history closing off.  I had travelled right across the country and collected just half-a-dozen stations.  I'd spend longer travelling to and from Darlington than I doing the actual day's jaunts.

I began to think, is it worth it?  Am I wasting my time?  I thought of the hundreds of stations I still had to get, and how long it would take me, and how much it would all cost.  I sank down in my seat.  I had to focus on that end point, the day when I cross off that last station, because right there on that platform I felt like I was wasting my life.  I couldn't justify the effort for so little result.

I'm sure I'll go a few days and I'll be itching to get out there again.  At the moment, it all feels a bit... pointless. 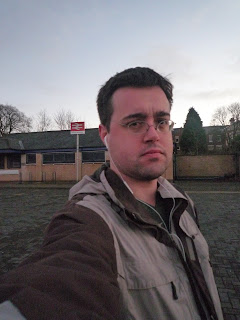 I would be genuinely gutted if you stopped your railway journeys! They're always so interesting and entertaining. You're bound to have off days whilst doing this but just remember all the brilliant trips you've made over the past few years and how much pleasure you've brought to so many people through this site. You don't have to rush through all these stations, you should take you time and take long gaps when you really don't feel like doing any. Don't forget it took you several years to do Merseyrail so we're all pretty patient!

I was going to make a mildly facetious comment of how that statue of Stan Laurel looks more like Frank Skinner, and appears to have been made out of liquorice.

But more importantly, this is a brilliant blog that I've been reading for years, ever since the post about your trip to the evil repeating birds of Leasowe and Moreton. I'd love you to continue writing, but will understand if you want to have a break, or finish the blog for the moment.

Scott, I want to echo the comments above. It is not pointless as your blog post provide entertainment along the way. I have been caught laughing in public while reading them on my phone! It's not the destination but the journey that matters. I hope you are not feeling more up beat soon.

I mean, I hope you ARE feeling more up beat soon.

I dunno - first Nob End, now Busty Lane. Why do these places seem to be forever just out of reach?!

Oh dear. I'm sorry. Obviously I won't give it all up. In fact I'd be a lot worse if I did pack in these quests! It was just the combinaton of a long day and a mess of a time with the trains.

Thank you for all being nice though :)

Hey, I hope you continue Scott (though I would understand if you wanted to take a Christmas break, don't wee all), it's certainly not pointless, you provide great entertainment, your writing is great, I'm sure this could be a book one day, so hope your back on track soon :)))

I have noticed a lack of photos of pints of beer in your last few posts. Maybe this could be the reason?

That's an interesting theory Dan, and one that certainly deserves to be tested.