Jim had been ill for some time, but he passed away last night after a fall. The Bf and I had only seen him on Wednesday, where he had been full of anger at David Cameron's speech and making plans for holidays. He'd seemed upbeat and cheery, unleashing his fearsome tongue on the Tory conference and updating us with the gossip.

Jim was a real railway fan; I was in awe of his knowledge and his passion. His home was crammed with models, books and magazines. His specialities were the Czech railway system, and the railways of the Caribbean - to the extent that he wrote a couple of books on St Kitts and Barbados. He'd just received the proofs for a third book, this time on the Jamaican railway, and was going to be checking them through. He was also a gifted artist, and had begun to sell his paintings; only a couple of weeks ago he put some on display in Northgate Street in Chester. He typically painted railway scenes, great plumes of smoke billowing out over landscapes, beneath Victorian arches, steam and fire and iron.

He was also a fan of this blog, and I think secretly pleased to find another railway geek in his circle (though goodness knows he already knew hundreds - he was nothing if not gregarious). Jim had a massive collection of photographic slides, amassed over the decades, that he was working to transfer to his PC. Among these were a number of shots of Merseyrail stations over the years, and he'd promised to send them to me for the blog when he scanned them in.

I'm writing this not long after finding out about his death, so I'm still a little stunned. The Bf, who had known him for the best part of thirty years, is even more upset. It'll be even harder for his partner Norman, and all my thoughts are with him today. I'll remember Jim for his humour, for his sense of fun, for his wicked, wicked way of talking, When the Bf and I signed our Civil Partnership earlier this year, we did it very quietly, with no guests; but Jim was one of the witnesses, and I was proud to have him there. He was one of a kind. 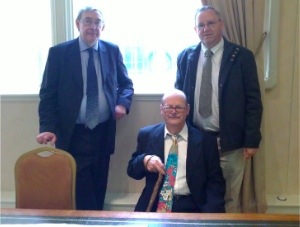 Above: Jim (centre), with his partner Norman on the right and our other witness, John, at our Civil Partnership in June.

Email ThisBlogThis!Share to TwitterShare to FacebookShare to Pinterest
Labels: Jim, The BF

Very sad news about Jim. he was one of a kind, very shocked to here of his untimely death. I worked with Jim for many years, there was rarely a dull moment, and his sense of fun, and good humour made him a very special person, who was very popular,and likeable. Jim had a very keen interest in Transport, Trains, Trams, Buses, you name it, and I remember for his leaving do we had a lift down in an old London Transport RT type bus, which he loved. God bless you Jim, you will be sadly missed by everyone :-)

I didn't know Jim, obviously, but based on the description here I wish I had.

I hope someone can continue his work to get his photo collection digitised -- it sounds like a historical treasure trove.

It is a shame, he was a great guy, he will be missed. I only picked up this blog as entered his name on search to check out a couple of his book on the railways in Caribbean, and it linked to this also, so felt I should comment, he was a fine fellow.
It's an interesting blog, quite into trains myself, and recently got into photography, so will follow this, I design public transport info (including maps!), took over when Jim left, so quite interesting. Going to Madrid in November, via Liverpool sth Parkway, so be cool to see (although fleetingly) Stations like Cressington, an interesting railway network, which is often overlooked. I have some panorama shots (been a smart arse on photoshop),of Lime Street which are quite cool, and hoping to sort some more when time allows, some quite photographic stations, (though not the Bache perhaps!!)if anyone is interested.
Keep up the good work, and bless Jim, a fine chap, who will be very sadly missed :-)

Very sorry to learn that Jim had died. I worked with him at CCC Backford Hall in the 1980s after he moved up from Southend. In those days there was still some fun to be had at work and, although it may sound horrific to some, we lots of great socials. Jim was always one of the focal characters, especially after a few drinks!
I remember that his new job provided sufficient funds for him to buy a new car, of which he was inordinately proud. Due to his somewhat small stature he immediately acquired a nickname of Metrognome.