Get Out Of Cities (Return To The Trees) 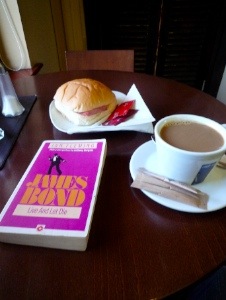 It's a bacon bap, a coffee and a James Bond novel. Yup, I'm off on another day out tarting! This particular fuel stop was at Carriages, the new cafe-bar in Chester station. I thoroughly recommend it. The above only cost me £2.50, and the cafe restores the look of the old Victorian station beautifully, with 1930s posters on the wall. It was peaceful and elegant - certainly a welcome difference from the overpriced Costa on the platform.

I'd decided to go out for the day to head into the countryside. I'd meant to do this stretch of line during the summer, as it was going to be dependent on good weather, but (a) there wasn't much good weather around and (b) when it did come, I had my foot in plaster and couldn't leave the house. Fortunately, the last week has been gorgeous, and quite un-Autumny, so I took advantage of the unseasonal warmth and hopped on a train.

I was on my own. The last few tarts have been accompanied, but I was back to Billy No-Mates for this trip. Confession - I was secretly pleased. Don't get me wrong; I love sharing my trips with other people, and I've had great fun with everyone, and I hope to do it again, many times, but sometimes I just want to be the Merseytart, just me. It's my little project and it's nice to hug it to my chest sometimes.

Of course, you know what that means. Yes! It's the return of the dodgy up the nostril shot! 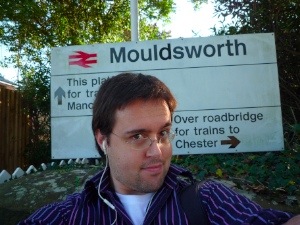 That was the fourteenth attempt. I've lost practice, you see? Plus Mouldsworth's station sign's at a funny height - I was squatting uncomfortably on the pavement at this point. Thank God it was early in the morning - I'd have ended up drawing a crowd otherwise.

Mouldsworth station is no longer staffed, of course (it is in Cheshire, after all) but at least it's not a boarded-up mess, as seen elsewhere. Instead, the building's been divvied up - there's a hairdresser's in one part, and a board was advertising offices to rent. I'm guessing there's also a house in part of it, as there was a washing line too. Either that, or Northern Rail have a very laissez faire attitude when it comes to staff using the facilities for drying their knickers. 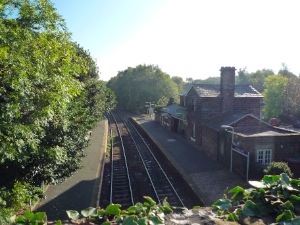 Directly opposite the station is the Goshawk pub and restaurant, and I cast a long, loving look in its direction. The food there is gorgeous, absolutely wonderful, and it's a favourite of The Bf and I. It wasn't open at this time of the morning which was probably a good thing, otherwise I would probably have gorged myself and tottered straight back to the station to go home, fat and contented.

Instead I pressed on. It was a truly beautiful day. Autumn sometimes creeps up on you and springs a surprise. This year it's decided to be kind, and there was a glow over the landscape. I wasn't wearing a coat, just a shirt and t-shirt, and the sun was beating down on me. It was different to the harsh summer sun though, warming and comforting, and combined with the dew still clinging to the grass and the nettles, it meant that there was a freshness in the air. 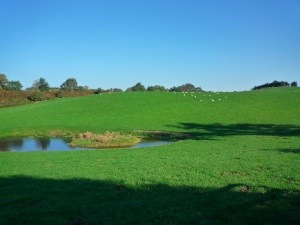 It's easy to forget just how beautiful England is, to take its greenery and elegance for granted. I walked along the road, and each corner seemed to surprise me with its well-composed picture of loveliness. You could close your eyes, spin round, and open them on a picturesque view straight out of a watercolour. A pond here, sheep grazing there, sudden flashes of colour from wild flowers. This is the time when nature should be winding down but it felt just as lively and vivacious as ever. I looked through one open gateway and spotted a bird of prey, perched on top of an empty stable: it lifted into the air at the sight of me and swirled over the field, a majestic, twisting genius of form, light bouncing off its feathers as it vanished into the horizon. 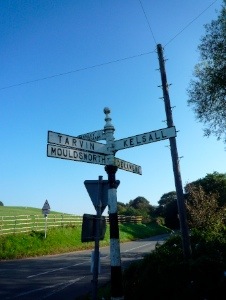 The only annoyance was having to occasionally hurl myself into the hedgerow to avoid an oncoming car, but this was rare; the road was as quiet and peaceful as the undulating landscape. The ground rose and fell beneath my feet like a waltz. Soon, I had looped round on myself, and I was heading towards the railway line I'd just left. 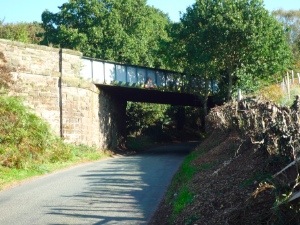 Passing under the bridge was like entering Narnia. The sunshine and warmth disappeared, and I was plunged into the cool woodland beyond. This was the Delamere Forest; two and a half thousand acres of trees in the centre of Cheshire, and the cue for me to go off road.

I hadn't really thought through my outfit for the day. Here I was, trekking through the woods, and I was wearing a shirt and jeans. I looked like a call centre worker who'd got lost on the way to work. Two cyclists passed me, cagouled up to the hilt, and I'm sure they must have thought that I'd wandered out of the Tardis or something. 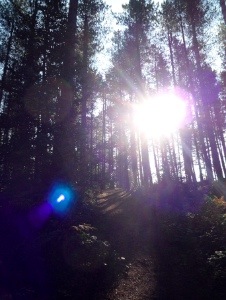 The cyclists were the first and last people I saw for a long time. I took the smaller, less well-trodden paths, pushing through the undergrowth. I love wandering through woods. When I was growing up, we had woods and fields very close by, and my friends and I would go up there and just wander round, talking, coming up with schemes, building "bases". It's a strange mix of the familiar and the dangerous - so easy to get lost in the depths and vanish from sight. 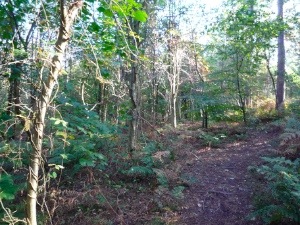 I'd been wearing my iPod when I passed under the bridge, but I stopped it as I got deeper and deeper into the Forest. Michel Legrand's Never Say Never Again soundtrack is a load of brassy nonsense at the best of times, but in the middle of all that green and shadows it seemed positively offensive. When I pulled the earbuds out I was shocked by how silent everything was. There wasn't even birdsong, just thick, cold air around me. I felt weirdly, strangely, thrillingly alone; it felt like the woods were mine somehow. Sometimes I'd spot a squirrel, or the odd bird, but other than that it was just me, my thoughts and acres of greenery. 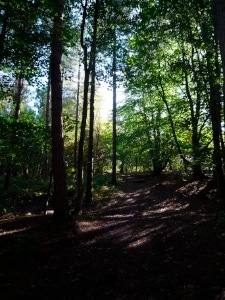 Even though it hadn't rained for a week, bits of the path were still thick mud, particularly at the base of small rises. I did my best Nureyev impression where I could, leaping over the bogs as best I could (and being even more glad that there was no-one there to see me), and clambering through the bushes to avoid the worst of them. Finally, my luck ran out, and my left foot sank into a thick mass of brown gloop, disgorging a disgusting smell and a wet fart as it did so. I yanked it free, quick as I could, but the water had already flooded inside my trainer and soaked my sock. 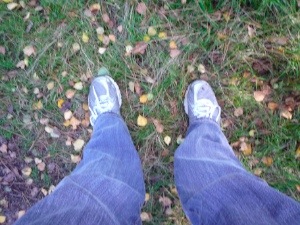 (Yes, I know I should have been wearing boots, not trainers; but the lace on my DMs snapped that morning as I was putting them on, so I had to settle for the trainers. Lesson learned).

I squelched off, and found a picnic area in a clearing where I could pause and wring out my wet parts. I also took the opportunity to check out the Ordnance Survey map, and I was astonished to find I had barely penetrated the forest; there was a massive lake to the south which I hadn't even seen yet. 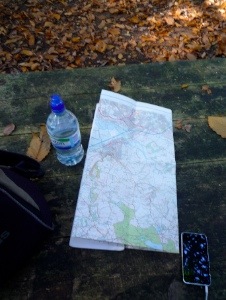 Soon I'd stumbled upon a car park, and my illusion of my own private forest was lost. Round there, it was like Oxford Circus - there were people swarming all over the place. They could be roughly divided into three categories:

1) Cyclists bouncing over the rutted earth with little regard for the state of their buttocks;
2) Families with small children, picnicking;
3) Retired couples desperately trying to find something to fill their time with.

The last category were the most unnerving; they walked in pairs, completely silent, not talking to one another or anyone else. They were like haunted ghost couples, floating through the woods. All of them were plastered with the ramblers uniforms, thick socks, anoraks, rucksacks; they'd spent their pensions on all the gear and they were going to get their money's worth, dammit. 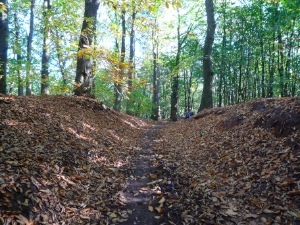 I was still trying to take the road less travelled, but it was harder now - all the paths were well worn, and signposted to buggery. I picked one, more or less at random, and saw that the trees were thinning out; it seemed I was headed towards the lake, Blakemere Moss. 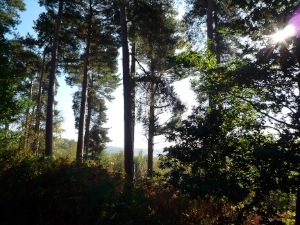 I wish I was a better writer, or photographer, and I could convey to you just how wonderful it was to step out of the trees, and down to the edge of the lake. Sparkling light everywhere, with the gentle slap of the waves against the shore; birds massed in the distance. There was a cool breeze drifting across the surface, enough to muss my hair like an affectionate uncle. I had no idea it was so huge, so blue, so tranquil. I sat down beside it and just watched the ripples for a while. 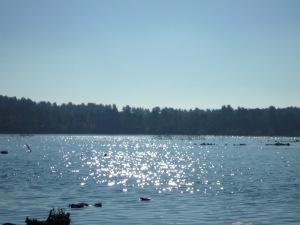 Even more bizarrely, Blakemere Moss is younger than me. It was here for hundreds of years, before being drained in the 19th century and planted with trees. It never really thrived, however, and the area was flooded again in 1998 to form a new wetland. Sitting there, I had no inkling that it was so recent; it felt so much a part of the landscape. 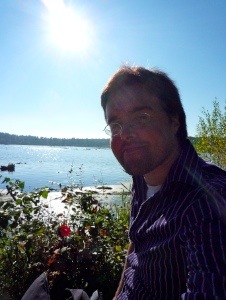 Eventually I had to move on. I still had train stations to collect, never mind fannying around by a bit of water. I knocked back a couple of Softmints and walked back into the forest. It got busier and busier - the odd cyclist became a group of six, the picnicking families became whole school parties, and the retirees came in bunches, like wizened grapes. One gang of pensioners were tucking pine cones into carrier bags, and looked at me with undisguised suspicion, as if I was going to steal their precious booty. 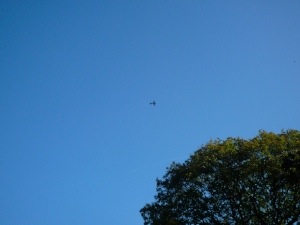 The final straw came when a woman in an invalid car belted round the corner, dragging a poodle in her wake, and nearly knocking me sideways. I'm all for increased access to our natural landscape, but I don't think a court in the land would have minded if I'd pushed her and her electric battering ram into the lake. 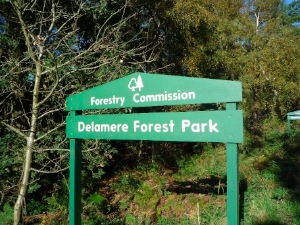 Nope, my idyllic morning of lonely walking had been well and truly finished. Time for me to break cover and head for the next station: the imaginatively titled Delamere...

Lovely write-up Scott, but why these persistent digs at Never Say Never Again? Once again you appear to be in denial about its brilliance!

Great descriptive writing as usual, you really do have a gift for it. Special congratulations for dropping in the word wizened; surely are few finer adjectives in the English language.

Nice to see the Forestry Commission sign and read the story of the lake. But I wonder how long it will be before the Tories sell it all off?

I'd rather watch Never Say Never Again than some other Bond films - e.g. For Your Eyes Only - but even the most fervent admirer has to admit the score is a big heap of shite. Still, I paid eighteen quid for the CD fifteen years ago, so what does that make me?

Thanks Gavin; I hope the Forestry Commission remains safe in all the cuts - never having been to the Delamere Forest before I was really seduced by it. I'd hate to see it ruined.