On Her Majesty's Kirkby Service 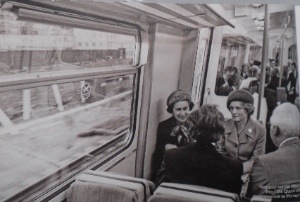 Robert e-mailed me this pic, and I had to share it. It's the 25th October 1978, and the Queen is officially opening Merseyrail by riding to Kirkby. (Not that I'm trying to score points or anything, but they could only get Prince Charles to open the Jubilee Line, and that was named in QEII's honour).

First of all, I am loving that hat. HM was quite groovy in the Seventies, wasn't she? It seems to match her scarf too. She also looks like she's having a rollocking good time, more so than that lady-in-waiting next to her, who looks like she's afraid of catching Working Class.

It's interesting to note the grime, mud and general air of misery outside the window, too. One of The Richest Women In The World obviously hasn't.

I'm also pleased to see that even when a train has been buffed, scrubbed and polished in readiness for a Royal visit, they still couldn't get those awful yellow and green seat covers to stay on properly. Look at the ones in front - I bet the Kirkbyites who rode the train back into the city had them off and chucked round the carriage before they reached Fazakerley. The Queen didn't ride back on the train; her limo was waiting for her at Kirkby station. Two standard class rail journeys in one day? Are you mad?

In short: this is ace. Any more photos on this theme would be much appreciated. Perhaps a shot of Liz getting a corgi stuck in the door, or having her ticket checked by an over-enthusiastic inspector. Or a photo of the exact expression that came over her face when she got off the train in Kirkby. I would like to see that one, very much.

It's interesting to note that the Queen's sat next to a bulkhead and can't see the deprivation around her....the very thought!!!!

By the looks of this pic I'd guess the outside view is off the recently abandoned fork to/from Exchange?

Presumably you've seen the pics of her getting the train to Kings Lynn in the summer? She does it every year apparently, and goes for standard class even though the EMU has first too. What I'd love to know though is whether she buys a ticket and has to insert it in the barrier at Kings Cross...

Of course, the photo we're all waiting for is the Queen on a Pacer, having a bounce up a branch line.

In the Black Country, a well-known (but possibly invented) anecdote relates how Queen Victoria ordered the blinds to be lowered on her carriage, as the royal train travelled between Birmingham and Wolverhampton, to shield her eyes from the industrial blackness.

Ah, you youngsters who are too young to remember... the seats weren't yellow and green originally, they were green (backs) and brown (seats). I remember I travelled on the first (is it Class 507?) from Waterloo to Seaforth on the day it came into service.

Oh so I was wrong: she did go First Class. Never mind.

Poor Her Maj; submitting herself to First Capital Connect (takes a moment to mourn the loss of Thameslink - sigh). Not the best image of the privatised railways for her. I like that she still does that wave, even from the window of a Metro train.

Yup, I think that's definitely the post Exchange desolation she's being whisked past - I guess the Echo photographer snapped a shot as soon as he got natural light. It was the Seventies though. Everywhere looked a bit shit then.

Oh Scott, schoolboy error! The Kings Lynn line has never been Thameslink, it's the WAGN route. FCC runs both lines but they're still technically separate entities. Better luck next time!

Not at all! I know that was the WAGN route (it also runs through Hertford, where my mum's family is from) and I grew up with Thameslink. Whenever I see mention of First Capital Connect, I have a moment of silence for Thameslink. FCC is such an unlovable entity and its subsuming of the good, strong Thameslink is something I will always dislike.

I knew as I wrote it someone would pop up and try to make me look like a fool. You fell into my trap! HAHAHA!