An Open Letter To The Man At Moorfields

A tribute to the lovely Bitchcakes.
Dear Man with a Backpack,
Ok, I admit it. You caught my attention Wednesday night by wearing shorts. A pair of hairy legs on a platform will easily distract me. We both got off the West Kirby train at Moorfields, and I have to confess, I hung back so that I could watch you walk ahead of me. Well, it's February, it's cold, and you was the only half-decent bit of naked flesh in the area; I'm only human. You were actually pretty cute, too, late twenties, fit.
You were wearing an enormous backpack. If you'd got off the train at Lime Street, I'd have guessed you were off on some grand escapade, but at Moorfields, I didn't know where you were going. Perhaps out to Southport? The backpack looked like army surplus, khaki, with pockets everywhere, and rammed to the gills.
I was idly constructing a fantasy involving your shorts when you did something so horrible, so offensive, that it immediately put you into my bad books. No shapely calves could rescue from this.
You stood on the left hand side of the escalator.
Perhaps you didn't realise what a hideous social faux-pas you were committing. Perhaps you don't use escalators often. Your hand crafted, hemp scented persona certainly implied that you were more familiar with a hike across country than a bustling inner-city underground station. But here's the thing: ahead of you, an entire train's worth of people filed onto the escalator and stood on the right. They all did it. Yet you chose to stand on the left, obstructing the "fast lane" behind you.
I don't know why you did it. Was it a conscious effort not to be part of the crowd? Well done on your individualism, but understand - that shouldn't be detrimental to the rest of society. Even though I was standing on the escalator, and not walking up it, it infuriated me. Worse, you blocked the way for the people who did choose to walk up, people who, being British and therefore too polite for words, didn't chastise you or demand that you moved, but instead stood behind with frustrated grimaces on their faces.
You then didn't learn from your mistake, and repeated your against-the-crowd escalator positioning on the second flight, up to the passageway that connects the two ticket halls. By now the crowds had thinned, as most people had changed to the Northern Line, but there was still a hefty number of people sharing the escalator with you. Standing on the wrong side once - that's a mistake. Repeating it - that's just plain rude. You'd seen what the rest of your fellow travellers had done. You'd experienced the social embarrassment of having a group of people wedged behind you. You'd passed signs on the escalator clearly asking you to stand on the right. I was now starting to take it personally.
At the top of the escalator, I couldn't stand it any longer. I had one more flight to use, up to the ticket hall, and charming though your calves were, I couldn't stand the frustration and simmering anger that you were inducing in me through your anti-social behaviour. I pushed past and headed for the exit, and left you and your backpack behind.
If you ever read this, please take this advice on board: stand on the right. Walk on the left.
Oh, and wear shorts more.
Many thanks
Merseytart 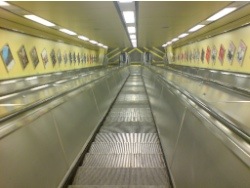 I agree with every word of this, including "and" and "the".

Surely standing on the right is a dastardly piece of London-centric social engineering? In Birmingham, someone riding an escalator on the right would stick out like a sore thumb. Perhaps Mr Shapely Calves is Brummie.

London-centric social engineering? Or good common sense? The Tube's had this rule for decades, so I'm pleased it's spreading to the provinces. If the savages of Birmingham can't manage it, well, that's another reason for me never to visit Brum...

Anyway, there are signs! Big pointy ones!

You don't even need the giant signs. Just look around you! Be just a little self-aware rather than so self-absorbed, Mr Shorty-Shorts, and see where every other person is standing.

Holy crap, I love the hell out of you!!!!! It's so true, thank you for trying to get the message out there. You know how I feel about these things! This was simply excellent - in writing and in content. "No shapely calves could rescue from this." = LOVE THIS!!!

Hey, we have to spread the word. Bad things happen when enough good people do nothing!