I've done something rather silly. In a moment of what I can only describe as Merseyrail related insanity, I've paid good money for a station sign.

You might remember I spotted Sandhills' abandoned "M" sign by the bins at the station last time I was there. Because I have too much time on my hands, I put in an e-mail to Merseytravel, asking what they were going to do with it and, if it was alright, could I have it? I clicked send and, to be honest, I forgot about it.

Two weeks ago, I got a bemused phone call from a man in Rail Services at Merseytravel. He first established that I wasn't, well, taking the piss; then asked me to make him an offer. It seems they don't get many people offering to buy their cast offs so after a bit of half-hearted haggling, I agreed to make a donation to the Claire House Hospice, and it was mine.

The Bf and I went to the station yesterday to pick up my booty in our car. I never knew it was possible to drive through clenched teeth, but he managed it. He was all for me getting the sign when he didn't think it was going to happen, but now he's realised he's going to have to share his home with a big lump of steel, it's not gone down well. I've only managed to subdue him by promising that I'll stick it in my study in the cellar so he won't have to look at it.

I went to the ticket office, and, slightly embarrassedly, explained why I was there. The man behind the counter took it in his stride, and took the opportunity to light up a massive stogie as he walked me down to the bin store so I could get it.

You know in Father Ted, when Ted explains perspective to Dougal?

It seems I needed a lesson of my own. The sign, in my head, was only about a metre high. In reality... 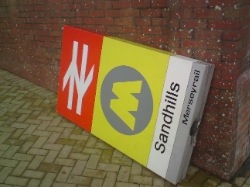 ...it was as tall as me, and twice as wide. And suddenly fitting it into our Honda Accord looked impossible, even once the seats were folded down. It was just too wide. I had to put the sign back, and shamefacedly inform the station supervisor that we'd have to come back another day. My Sunday is now going to be spent looking at our van hire options.

Well, it seemed like a good idea at the time...

Email ThisBlogThis!Share to TwitterShare to FacebookShare to Pinterest
Labels: Merseystuff, Sandhills, The BF

Van hire?! This looks like it's going to end up being the most expensive e-mail you've ever sent.

I know. I wish I'd been drunk when I sent that e-mail. I'd have an excuse then.