Looking back over the last couple of months it's become clear that while I have whittered on just as much as before - even more in fact - I've done less and less actual tarting. I'm sorry about this deviation from the blog's remit, and I'm going to try and get things back on course. That's not to say I won't still wander down some random avenue now and then, but hopefully I'll be able to slot in a few more trips than I have been doing.

I was keen to go out this week, while the weather is still passable and while the kids are still in school. A couple of plans to go out to far flung corners of the City Line fell through, for one reason or another, so I finally settled on finishing off the Borderlands Line, the artist formerly known as the Mid-Wirral Line, which stretches from Bidston to Wrexham. Luckily most of the line isn't on the Merseyrail map, so I wouldn't have to end up in the Welsh hinterlands at lonely halts on the side of mountains, and I'd completed the bottom couple of stations months ago. This would constitute the last of the English stations on the line - Neston, Heswall and Upton. 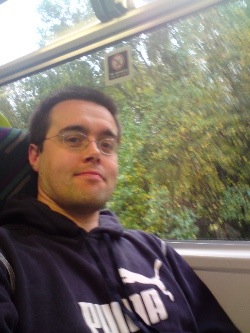 The train wheezed and clattered and moaned its way up to speed, finally reaching maximum velocity somewhere around Beechwood. At which point it immediately had to shift down a gear again so that it could stop at Upton. According to the timetables, Upton's a request only stop, but the train stopped anyway despite no-one getting on or off. It makes sense; Upton is still very much in Birkenhead's suburban sprawl, and it is bound to be busier than some of the other request stops like Penn-Y-Ffordd. After the brief pause, we carried on down the Wirral, and I couldn't resist peering down into the back gardens from the embankment as we passed by. I'm a terrible voyeur. There was nothing exciting to spot in the tiny postage stamp spots of green that lay behind the new build houses along the route - a woman having a cheeky fag, strings of moist washing, and an awful lot of trampolines. 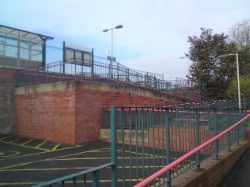 The train moved out into the countryside then, and the housewives were replaced by horses, and brick box houses by tin barns. One more stop, at Heswall, and then I was jumping off at Neston. All the stations on the line are the bus stop type - just a shelter on the platform, with no ticket facilities. Neston's been DDA'd to death, and getting down to the street involves a run down a Mouse Trap of ramps to get there. 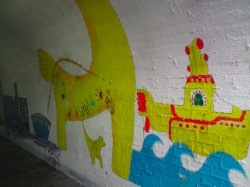 There was a nice little surprise in the tunnel under the platforms; a mural, obviously designed by local schoolchildren, showing the Liverpool skyline and its landmarks. It was ok, though the Echo Arena looked like a crab, and the Yellow Submarine is so close to the Superlambbanana's backside it looks like a comically shaped turd. I also thought: where's the Wrexham mural on the other wall? Surely there should be one showing all the landmarks at the other end of the line, like... erm... well, I'm sure there's something. 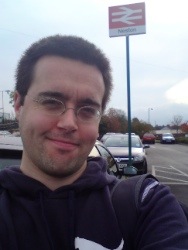 We're not in Merseyside here, but instead in the brief sliver of Cheshire between the Wirral and Wales, so the station sign was just a bog-standard BR one. I was disappointed to see that if I'd come a day later I'd have been able to visit Neston's brand new Aldi, right next to the station. So. Very. Disappointed.

Neston's quite a nice, pretty little market town. There's the obligatory Tesco Metro, of course, and the banks, but apart from that there seemed to be a few local businesses, and at twelve o'clock on a Wednesday, it felt like it was pleasantly bustling. I queued up at the cash machine for some spends behind an ignorant cyclist who was oblivious to the people waiting behind him. Here's a little tip for you, mate; you need your cash card to get access to an ATM. As such, it might be an idea to extract it from deep inside your lycra shorts before you get to the machine, instead of rustling around inside them for five minutes and making all the people waiting behind you gag.

(The Racecourse Ground! Home to Wrexham FC! They could have done a mural of that. There, that's all my Wrexham knowledge exhausted.) 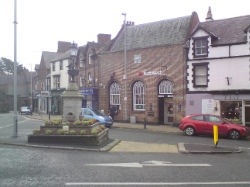 I'd planned on taking one of the main roads out of the town to my next stop, but at the last minute I had a change of heart, and instead I headed through the town centre to Station Road. Satnav users headed for Neston, be warned; the train station is not on Station Road. In fact, there's not much on Station Road at all, except for an old people's home and the entrance to the Wirral Country Park. 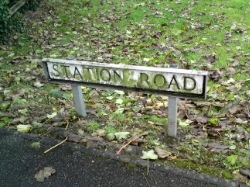 (That's probably why they can't be bothered cleaning the sign). Readers with very long memories might remember that I visited the Country Park once before, when I went to the preserved station building at Hadlow Road. This was a stop on the old Hooton-West Kirby line, the line that disappeared in the Beeching cuts and was subsequently resurrected as the Wirral Way, Britain's first Country Park. Neston South station once stood along here, before being demolished and having a load of houses built on top of it in the sixties. Now all that's here is a car park and an elaborate red-painted bridge to take you over the road and onto the path proper. 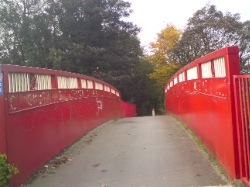 The walls of the bridge are etched with a couple of verses, apparently as part of the Millennial improvements (the Wirral Way is also part of the National Cycle Network). Heading towards Neston, you have:

while heading away from the town there's:

It's a bit "back page of the People's Friend", but it was probably done by local schoolchildren or something. That would explain the incorrect spelling of "clickety" anyway. If it was an Andrew Motion original I'll be very disappointed. I like the past/present theming though, different depending on which way you are going. 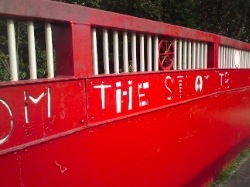 I crunched onto the pathway. Because it's part of the cycle route, it's been nicely tarmacced, so it was a pleasant surface to walk on. The path curves away from the town so I was pushed into peace and quiet fairly quickly. Running alongside the cement road was a soft earth bridleway, dotted with Jurassic Park-like hoofprints. 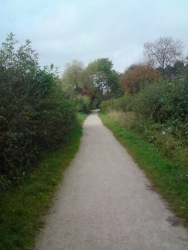 It was strange to think that this had once been a railway line, because it didn't seem to want to go anywhere very quickly. The Borderlands line travels through a lot of countryside en route, but it was saved from Beeching because of its usefulness for freight to the Birkenhead docks. This line had no saving graces though, just a few country halts, and walking it now it was hard to see what kind of service you could possibly have got out of it. 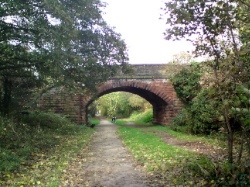 Under a bridge, I saw how wide the trackbed really was. I also encountered someone else on the path for the first time, two women walking dogs. They both carried leads in their left hand and blue baggies filled with faeces in their right. That, ladies and gentlemen, is why I will never have a dog. I will do many things for a pet; brush it, feed it, walk it, but I refuse to pick up its freshly laid excrement and carry it around with me like a Cath Kidston handbag. I will get a dog the day I can afford to have someone follow me around to do the poop scooping for me. 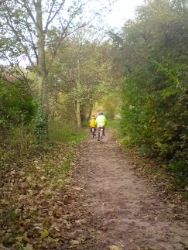 On I trotted, taking in the day. It's been weeks since I walked quite so much, and my body was quite unused to it; my calves were already starting to strain, and a dark stain of sweat was spreading across the front of my hoodie. Despite it being mid-October, and the skies churning darkly above me, there was still enough warmth for me to do without a coat. I leapt out of the way of two old dears on bikes, gossiping loudly in lieu of having a bell, and clearly far too busy to do anything resembling a Cycling Proficiency Test, and then the Wirral Way broke for another Station Road, this time in Parkgate.

There were actually two stations at Parkgate. The first was the original terminus for the line from Hooton, then a bridge was built across the road and a new station was built on the north side. Nothing remains of the stations now, or the bridge. There is, however, a memorial to the old railway, built at the entrance to a new cul-de-sac. It's the wrong gauge (and God, how things have progressed that I even spotted that!) but it's nice to see none the less. 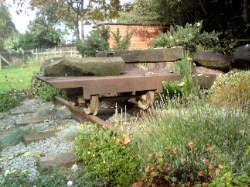 I could, at that point, have continued on the Wirral Way all the way to Heswall; after all, that was the next stop on the old railway line. However, I was bored with taking the back routes, and I wanted a change of scenery, so I turned and headed down into Parkgate proper. I knew I was moving up in the world, just from the state of the road sign. This one was clean... 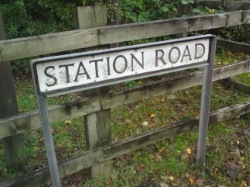 There's another Station Road without a station - in Lower Heswall. It was named for the original Heswall Station which was also on what's now the Wirral Way.
http://www.disused-stations.org.uk/h/heswall/

The current Heswall Station on the Borderlands Line used to be officially known as “Heswall Hills”.
https://en.wikipedia.org/wiki/Heswall_railway_station

Another Station Road associated with a defunct station on the Wirral Way is located at Thurstaston.
https://en.wikipedia.org/wiki/Thurstaston_railway_station

Station Road, Barnston is named for a long-disused railway station on the current Borderlands Line.
http://www.disused-stations.org.uk/s/storeton/