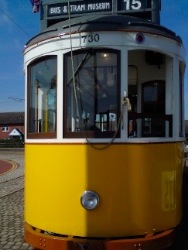 It's Wirral Heritage Open Weekend! There's probably no need to tell you this - I expect you already had it marked on your calendars - but yes, every now and then Wirral Council realises that things like art and history are worth supporting and chucks together a weekend celebrating it. Then they withdraw all the funding and burn the libraries down.
I broke out my historical pants for a visit to the Birkenhead Tramway, which runs from the Woodside Ferry Terminal to the Wirral Transport Museum a mile away. Birkenhead was the home to the first trams in Europe (in fact there was a terminus right at the bottom of my road) and one teeny tiny section of what was once a large network has been preserved by a team of dedicated amateurs, the Merseyside Tramway Preservation Society. The BF and I wandered down to Woodside and bought a ticket off the man sat by the tram, sunning himself. The tram we were riding today was a Portuguese one, shipped over from Lisbon, which kind of defeats the object of a heritage railway celebrating the Wirral's past but there you are. Anyway, obligatory shot of me: 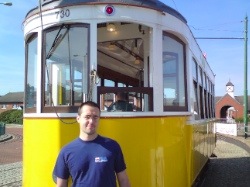 The tram was quite full with parents and children. In fact, we were the only people there without any kids, which always makes me feel uncomfortable. We looked like perverts. Even more than we usually do. It was beautiful inside, with a varnished wood interior and comfortable seats. 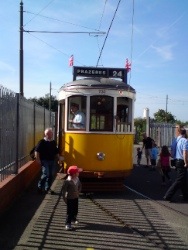 Ding ding! and the tram was away, following the dock past Wirral Met's new sparkly Twelve Quays campus. In a major route planning FAIL, we also passed the sewage outfall processing plant, which alerted us to its presence by honking royally. Another ding ding!, a slight pause as we crossed the road, and we all got off again and headed inside the Wirral Transport Museum (after the Bf established it was free to get in; he's nothing if not frugal). This is another of those expensive luxuries that Wirral MBC would like to get rid of, so it can spend more money on refurbishing its offices and bidding for city status and objecting to Liverpool getting a tram network. 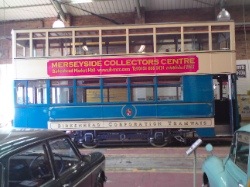 The museum is housed in an old depot, and has that air of slightly dishevelled amatuerism that is unexpectedly charming. There were three men of declining years sat behind a table, drinking from a thermos, and greeting us as we wandered in. The exhibits had neatly typed labels in Times New Roman, and were laid out in a manner that sort of made sense. There were motorcycles, cars (the Bf went into nostalgic raptures about a Triumph Dolomite) and, of course trams. These were beautifully restored, though anachronistically had an advert on the side with a website on it. Necessary evil, I know, but it sort of ruins the effect.
It was trying very hard to be a proper museum but it was just a bit off. I wanted to ruffle its metaphorical hair for effort, but what it actually reminded me of was my Granddad's old shed, where he used to take things apart to see how they worked and which was always a mass of bits of things and metal and spanners. My Granddad is the only person I have ever known who built his own tv set, out of parts he'd scraped together; then again, my Granddad is also the only person I know who once found a tortoise in a hedge. 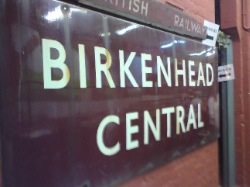 The whole thing occupied our attention for about half an hour, which was handy as the tram was running every half hour so we could get out of there fast. I was guilted into dropping a couple of pound coins into the volunteer box on the way out the door. There was a slight delay as there seemed to be some problems with the tram; the problem was so severe that they had to call in a man with a beard to help them out, but it was soon fixed and we were off. 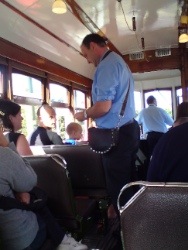 We got back on the tram and had our tickets checked again. I got the feeling that this was the highlight of this man's day. It's funny; there's a kind of paradox of enthusiasm in the job of ticket inspecting, which means that if you get paid to do it, you wander up and down the train with a face like a smacked arse, but if you're doing it for free you really enjoy it. Perhaps the RMT should campaign for ticket inspectors to be volunteers. Then it was back to Woodside with more ding dings of the bell en route.
All told it took up about an hour of our time, which isn't bad going for a couple of quid on a Saturday afternoon. It's cheaper than a pint of beer, and a lot more wholesome. There was a proposal to extend it to Conway Park, which would make it both useful from a transit perspective (it would be closer to the town centre, and the bus and train stations there) and also more of an experience than the mile it currently runs. However, like everything else, it's dependent on money, and right now no-one's got any of that. And if they have they're keeping it to themselves and cutting back on mad luxuries like historically important transport attractions that should be kept for future generations. Shame.
Posted by Scott Willison at 09:35

The Birkenhead museum does have a certain thrown-together charm -- reminds me of childhood trips to Steamport Southport, except with fewer buckets catching drips from the leaky roof.

There was a rumour floating round that Merseytravel are interested in taking over the tramway and museum to complement the other attractions at Woodside. It all seems to have gone quiet now though.

It would make more sense for Merseytravel to take it over and tie it in with the ferry terminal. When I visited the museum, a Japanese couple came in and I couldn't think how they'd ended up there, until I realised they must have come over on the ferry. It certainly makes more sense for Merseytravel to own and run a tram than a U-boat or a space museum. They would have to extend it to make it really worthwhile, though; at it's current length it's neither use nor ornament.

I hear that the museum has ceased operating at present.
Local polotics & all that.I was in Merseyside on a coach trip from Bedford last month.
David Menzies.
Bedford.

Wirral Transport Museum and the Tramway construction were funded with National and Europian funding via two funding agenties over a period of five years. Wirral Borough Council have not placed any funding into it. The Merseyside Tram Preservation Society have restored four of the heritage tramcars, but they do not own or have operating powers to run the tramway. The museum has never been closed down, but in line with what all un-interested Council do, have cut it's opening hours, failed to advertise or even place a name board on the building in 11 years.
Merseytravel will give both Pacific Road and Taylor Street the management structure and funding these two venues deserve.