Orpheus in the Underworld 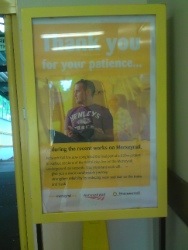 The loop is closed again: the circle is complete. Network Rail have finished their maintenance work, and have thanked us for our patience with a poster of that fit bloke in the Henleys t-shirt from the Railpass ad. Which is the gift that keeps on giving, if you ask me. I can't say I've noticed an enormous amount of difference in my ride quality, but I'm writing this while off work sick, so it may be I just haven't been round the loop enough. Anyway, the gist is: we're back to normal. 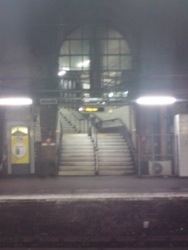 What it does mean is that Platform 2 at James Street returns to its ghostly state. Up until the 1970s, this was the platform that trains from the Wirral called at. However, the construction of the loop line meant that a new running tunnel had to be constructed to send the trains Moorfields' way, and so Platform 2 was rendered redundant. It wasn't refurbished in the brown plastic style of Hamilton Square and the other underground stations, and was instead left to rot in its original 19th century state. It receives only the bare minimum of maintenance to keep it up to code for emergencies and closures. 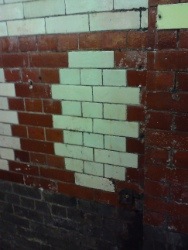 The opportunity to finally use Platform 2 was the high point of the loop closure, as far as I was concerned. It's been attacked by the Colour Tsars, of course, and there are a few incongruous seats and help points, but it's mostly a Victorian underground station, and a little gem. The walls are tiled in that great way that went out of style, then came back in again when people realised how practical it was. It's very similar to the stuff that Yerkes did on the London Underground, and which is now being restored rather than covered up. Of course, the combination of decades of neglect with thirty years of disuse means that the tiles aren't exactly gleaming. The mould and decay is somehow picturesque; it adds to the impression that you're in some deep underground hole. It's all very Neverwhere. 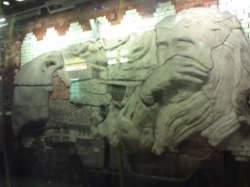 Adding to the otherworld atmosphere is Dream Passage, a piece of artwork by Tim Chalk and Paul Grime on the platform wall. Fragmented images are suspended on the tiles, giving the impression of figures breaking through, or the remnants of another civilisation. It looks great from the opposite (Wirral-bound) platform, but when I got the chance to look up close, I really appreciated the details in it. 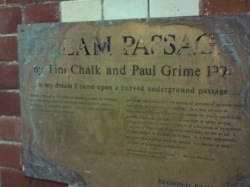 The work was commissioned in 1992 to celebrate the hundreth anniversary of the Mersey Railway (though in fact the tunnel was opened in 1886: 1892 was when the tunnel was extended to Liverpool Central). I found a great interview with the artists at the BBC's website; however, for some reason, it's only compatible with mobile phones, so stick that link into your mobile to download it. According to them, their brief was to do anything, so long as it had nothing to do with trains or the Beatles. 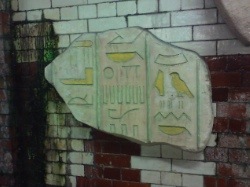 It's the city's subconscious, its below surface ideas and thoughts and wants. We've travelled under the ground and under the world to find faces, figures, dreams: winged creatures and babies, and, intermingled with them, elements of the real world. St George's Plateau is there, and so is the Albert Dock, concealed within hieroglyphics and surreal imagery. It's strange and fascinating. The three dimensional work begs to be touched, and over the weeks of the closure I often saw commuters doing that - running their fingers over the grooves and the faces as though trying to understand the weird mix of shapes. 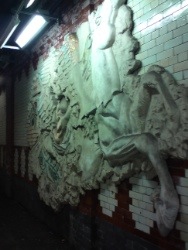 It's another world down there. There's a stark contrast between the gloomy netherworld of the platform and its brightly it 70s cousin across the way, like a fracture runs through time along the tunnel. 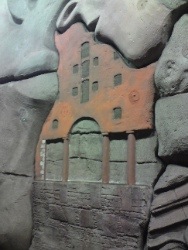 Normally this is the point where I complain about the art being rendered inaccessible; a quick whinge about it being hidden away. But actually I prefer it this way. It becomes even more mysterious and curious. It'll remain this strange, unknowable entity across the tracks, something to admire from a distance and to speculate about. 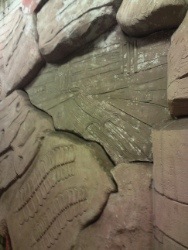 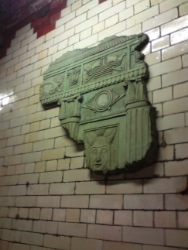 During the loop closure I had to travel over to New Brighton one day, and was quite excited when I was pointed to platform 2 for my train.

Completely forgot about the mural though, only remembered as we accelerated out of the station... "oh yeah, I could have seen it up close" :/

Sad though it was, the opportunity to see the mural was the first thing that popped into my head when I saw about the closure!

I know the work in the loop line was complerted at the back end of May but if you are interested in seeing photos, go to my news release at

You can download the photos if you wish - they are copyright-free.

You might be interested to know that we (and the others involved in the refurbishment) are planning a ministerial opening one day during week commencing 27 July - or we were prior to the latest reshuffle!

Brilliant summary - info difficult to find. Many thanks

How did you get to the other platform on James street, you know what i'm talking about. I never see ANYONE on the platform with the artwork engravings on it. I thought it was one of those mysterious abandoned places like aldwych in London.

Could there possibly be a more appropriately named underground station mysterious art duo than Chalk and Grime?

I would have given them funding for whatever they wanted just for that.