The BF is many wonderful things. Chief among his good points is that he's extremely well trained. Years of being quietly crushed under my jackboot have got him working well, and so when he went to work this morning and saw something interesting at Birkenhead Park station, he immediately took a photo and sent it to me. 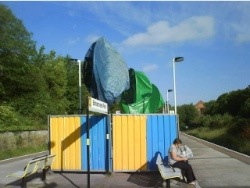 Hmmm. I have to admit, from that angle I wasn't entirely sure what I was looking at, so I e-mailed him for a better description. He replied:

"The art is on the poles in that area that was cordoned off by the metal screens. It looks like cast iron images that have bee stuck to the top of the poles. At least I think it's art."

Yup, Brian Sewell is quaking in his boots. Turning away from Newsnight Review, I did a bit of net scouring and found that yes, it is indeed art. The work's been commissioned from artist Stephen Hitchin by Merseytravel, and I've found out some more details at the artist's website. His most familiar work to people in Liverpool is probably the relief panels at Queen Square, though his commissions are also in the Women's Hospital and the University. Below is the artist's impression of the completed piece, which will "look to view both the well and lesser known areas of the Wirral and Liverpool all of which are connected from Birkenhead Park railway station." Constructed from steel, the pieces are over five metres high. 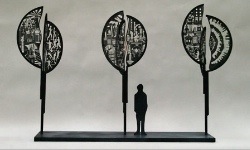 This looks great, and is a real bonus for Birkenhead Park station. The park itself has been renovated, and is really beautiful now, a definite asset for the town and the area, and I'm pleased that more is being made of the station to welcome visitors. It's received a minor makeover recently, with automatic doors and a new tiled floor, and the great looking artwork is certainly a bonus. Harking back to my previous post, the station would be ideal for an M to Go: the station's in a commercial area already, and the building is little more than a box as it is (the original was destroyed in the war). Unfortunately, tourists will still have to walk past Marleys, which sells "ornamental" bongs, Rizlas and air rifles, which you don't get outside the British Museum. Give it time though.

When the work's finished I'll have a wander down there myself to see it in the flesh (not that it has flesh, but you get my gist).

Hitchin's website also says that a second piece of work is to be installed at Bootle Oriel Road. This is an absolute bonus as a piece of quality artwork would make that station look around 2000% better. I realise that sounds like I'm damning with faint praise, but I mean it. And it's yet another pat on the back for Merseytravel and their continued commitment to public art across the area.