As spotted on the timetables at Lime Street: 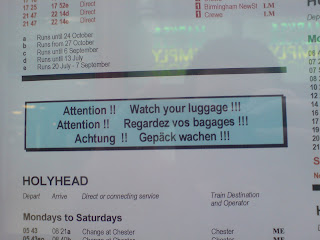 ...which seems fair enough; we've all seen the tourists staring at the boards and leaving their rucksacks cluttering the concourse. This one, however, grabbed my attention: 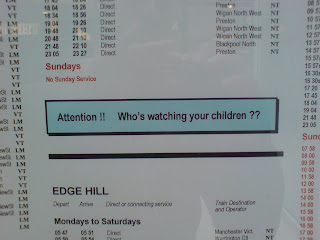 This raises a few issues for me:

1) Are French and German children not worth bothering with?

2) It should never be two ! or ? marks. Either (!) or (!!!), and the latter should be used only in times of extreme duress or panic e.g. "Zut Alors! Leetle Pierre 'as fallen onto ze railway tracks!!!" Someone send Lynne Truss to Rail House.

3) Do they mean "who's watching your children and stopping them from running amok and injuring themself while you are gawping at this timetable?", or do they mean "watch out, watch out, there's a paedo about?". Sadly, a part of me rather suspects it's the latter, and that this sign had been planted on the timetables by a News of the World reading Network Rail employee. I fully expect the next edition to feature "Watch out!! An asylum seeker is spending your tax money on booze and fags!!" and a picture of Jordan's tits.