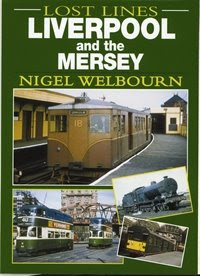 But I am happy to report, I've won something. Actually, really, won a competition. Last month's Modern Railways magazine had a large feature on Merseyrail, so naturally I bought it - I am nothing if not obsessed. (I bought it in Lime Street too, just to compound the geek factor). There was a competition to win a copy of Lost Lines: Liverpool and Mersey, by Nigel Welbourn: a book tracing the paths of railway lines th
at had disappeared from Merseyside's map over the years, with dozens of photos. I answered the question - I can't remember what it was now, but the answer was Chat Moss; it was something along the lines of "What was the name of the bog the Liverpool to Manchester railway was built over the top of?" and e-mailed my answer. And when I came home this evening, there was a nice padded envelope with my book inside.
I'm extremely excited. Not just because it looks like a good book (I've had a flick, and all I can say is: be glad I got it after the last blog entry, because if you thought I was boring then, I'd have been even more dull after reading all the factoids in that) but because I've actually won something. A nationally held competition, in a magazine read by literally hundreds of people (possibly even thousands - I don't know) and I won!
Of course, about five minutes after I'd opened the parcel and bounced happily around the room, I was filled with self-doubt and dodgy self-esteem as I wondered if I'd only won because no-one else had entered. I should also point out that there was more than one winner. But I will be buying the next edition of the magazine, to see if my name has been printed in the winners. I'm easily pleased.
And yes, this definitely proves that I am a complete Merseyrail geek. The fact that I'm going to put it on the shelf next to my copy of Merseyrail Electrics: The Inside Story doubly proves it. Even when I'm a winner I am, in effect, a loser. I don't care. I'm bloody chuffed, and if that makes me a geek, an anorak, a nerd, a gricer, or any one of a thousand other insults... so what? I'm pleased!
Posted by Scott Willison at 19:23

Email ThisBlogThis!Share to TwitterShare to FacebookShare to Pinterest
Labels: Merseystuff

Gahh... I entered that competition! Does this mean I actually have to pay to get this book now?

Or should I just stick with my well-worn copy of British Railways Past and Present No.39: Liverpool and the Wirral?

Congratulations, your luck has turned - better check those Premium Bonds

Robert, I'd love to say I'm sorry and I wish you could have won... but I'd be a liar. The taste of victory is way too sweet!

I've already checked my premium bonds this month - nothing. Lottery on Saturday, though...