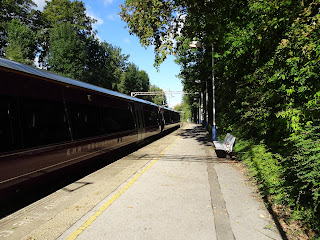 Perception.  It's a strange, unknowable magic.  What you see is different to what I see, and we will never know.  Our eyes play tricks on us, fill in gaps, take shortcuts that alter our views.  Our brains filter and reinterpret.  Each of us lives in a world no-one else can access. 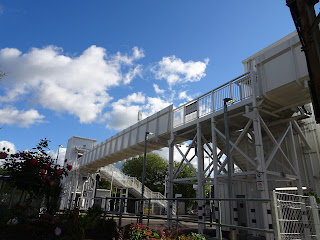 Who you are changes too, and changes the way you see things.  I returned to Kidsgrove station not realising I'd been there before.  I'd visited back in 2014, as part of the Northern Rail map, and I'd forgotten about it.  When it showed up on the West Midlands Map too I blithely pencilled it in for a visit.  Back then, I'd come at the town second, starting out at Longport and walking up the canal.  I'd passed from the industrial ruins of Stoke on Trent through countryside and parkland before pitching up at Kidsgrove station.  The walk had turned greener and warmer as it went on; the streets I'd passed through had been leafy and the houses large.  There was a church and trees and a canal view - it seemed charming.  The station was a bit run down, but stations often are, and I'd come away with an upbeat report. 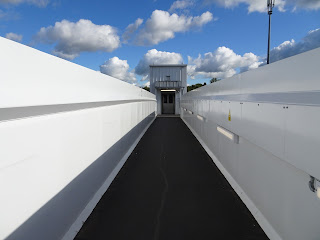 Since I'd last been here the Accessibility Fairy had visited and planted some lifts and new walkways.  I might have spotted that I'd been here before if they hadn't; I normally have a great memory for places.  Kidsgrove was just different enough to fox me.  Either that or the dementia has started hitting.  I was mainly impressed that all that clean white steel was still clean white steel and hadn't been graffitied or vandalised in any way.  I suppose it's only been a few months - this time next year the local teens will have discovered the blank canvas and will be painting it with obscenities and love notes. 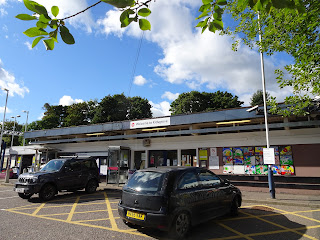 The station is on an island, a canal on one side, the tracks on the other.  Did I take this picture to shame the person who had parked on the extensive yellow hashes?  That's a distinct possibility. 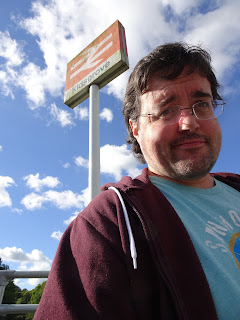 Students of the decay of the human being may wish to contrast this photo with the one in the earlier post and then recoil in horror.

I crossed the canal to enter the town centre proper.  The A50 climbed a steep hill with small shops on one side.  The Kidsgrove Bank Dental Surgery still looked an awful lot like a NatWest, while flags hanging from the lampposts urged me to keep the town tidy.  On top of the hill the Victoria Hall stood firm, home to the town council (though it's now part of Newcastle-under-Lyme borough) and an event hall for hiring.  The clock tower kept the correct time which is depressingly rare. 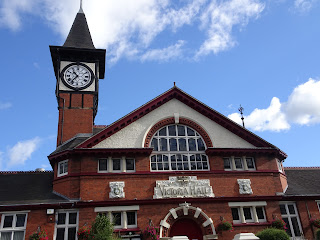 I was in search of an old station site.  The current Kidsgrove station opened as Harecastle and was one of three stations that served the town.  Another line, constructed mainly to service the pottery and mining industries, looped away from the mainline and went via Tunstall to Stoke.  It gave Kidsgrove two more stations - Liverpool Road and Market Street Halt.  I ducked behind a telephone exchange and across some waste ground to where the Pottery Loop Line had once been. 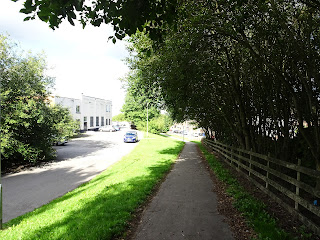 It's now a walking and cycle route and Market Street Halt was positioned behind the Masonic Hall, handy for the town's main shopping district.  There's nothing there now, just a crossing of footpaths, but it felt satisfying to tick another station off, even if it was only virtually.  I went back to the town round the back of the Labour Club. 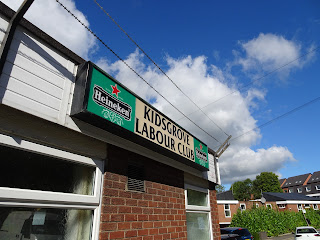 It turned out this was one of those "bitterly ironic" locations.  At the front of the club was a small queue, a few mums with pushchairs, some pensioners.  They were queuing for the town's food bank.
Food banks make me furious.  I shouldn't know what a food bank is.  I shouldn't be aware of them.  I live in one of the richest countries on earth.  Nobody in this country should be relying on handouts.  Nobody should be suffering.  There shouldn't be people - vulnerable people, people with children - queueing for baked beans and powdered milk and tea bags.  This is appalling.  This country is appalling.  And if you voted for the shower of blue bastards who've made it worse over the past decade, fuck you. 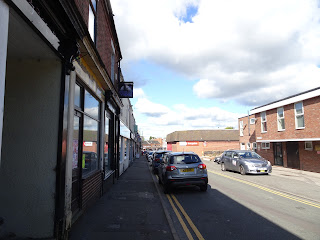 Sorry, wandered off topic there.  But to return to the oddness of perception; I'd previously seen Kidsgrove as a well off town.  Now it was coloured with sadness and deprivation.  Now it had empty shops, low-grade retail, odd businesses that seemingly had no place on a high street.  That food bank queue had altered how I saw the town.  Of course, it's also possible that Kidsgrove has severely gone downhill in the interim; it has been eight years since I was last here, eight years of Tory rule, eight years of Brexit and Boris. 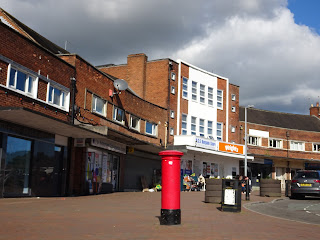 I looped round the threadbare town centre, past motor centres and bakeries (this month's doughnut: Jaffa) and then down a side road.  There was a "neighbourhood community facility", buried behind high metal fences and looking very closed, and a lot of social housing that twisted and turned down the hill.  I could see through to their back gardens where they suddenly plunged down at terrifying angles, and tried to imagine mowing those lawns without slipping. 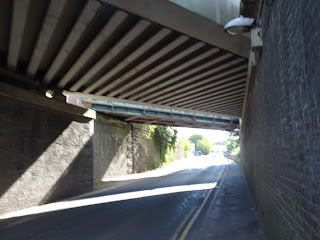 Beneath the railway bridges, then on to Tesco, the site of Kidsgrove's other former railway station, Liverpool Road.  The Potteries Loop Line, gently curving through village after village, couldn't compete with the direct routes taken by road.  The goods traffic went first, then, in the Sixties, Beeching came along and killed it off.  A cycleway follows the old route but nobody is agitating for trains to return. 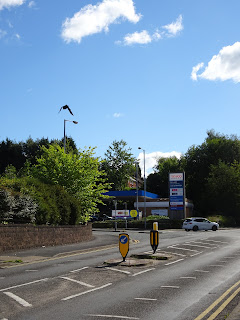 I nipped into Tesco to use the facilities, then returned back to Liverpool Road and turned down by the Lidl for the canal.  It was a thick brown, the colour of rust, a side effect of iron leaking into the water, and it looked grim and unloved.  A pub nearby advertised "canalside views" and I wondered if anyone bothered. 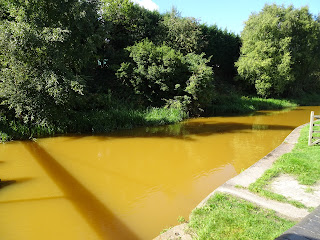 This was the Trent & Mersey Canal, connecting Northwich with Derby via the Potteries, but I didn't see much sign that it was well navigated.  I walked about a mile and didn't see a single boat navigating it.  There was one narrowboat moored up, abandoned, its woodwork rotted and its ropes thick with mould.  On the top a Dyson handheld hoover had rusted and cracked.  There were walkers, sprightly pensioners in cagoules who offered a cheery "morning!" as I passed, and the occasional dog. 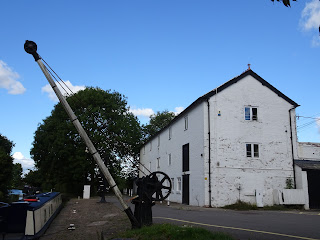 Clearly the canal does still have its users; there were extensive facilities for showering and water at one point, and plenty of places to tie up.  Perhaps this was simply the wrong season for it.  I pushed on, trying to enjoy the walk, trying to avoid the dark thoughts swimming around inside my head.  Kidsgrove had depressed me and made me feel negative and I needed to distract my brain before I turned it in on myself. 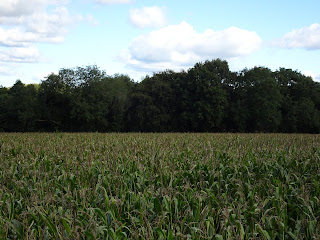 Soon enough I was leaving the towpath and clambering up onto a busy road.  It was the same A50 that had passed by the Tesco earlier; I could've got here a lot quicker by following it, but then I'd have missed the delightful scents of Kidsgrove's sewage treatment works, which shadow the canal. 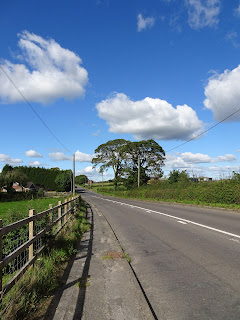 The village of Church Lawton, hidden to the north of the main road, gave way to the edges of Alsager itself.  A sign for the Geberit factory gave me a momentary chill.  I'm currently in the middle of a big bathroom refurbishment and I have seen way too many toilets and sinks lately.  They give me hives, particularly Geberit, which is definitely towards the "how much?" end of bog production. 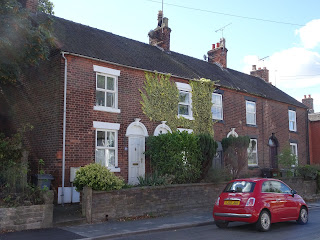 Alsager was a small farming community until the railways came, when it became a fashionable place for the more well-off industrialists from Stoke to have their homes.  There was a pleasing mix of cottages and villas, well-kept and well-scrubbed, proper Cheshire affluence that had arrived in the nineteenth century and never gone away.  Alsager is far too close to Crewe and Stoke to get the glitter of the Golden Triangle but it still carries with it a slight sniffiness, a "better than you" tone. A sign in a solicitor's window advised me that "a will is not enough" and "how would you feel if your grandchildren lost 40% of your estate in Inheritance Tax?"   To which any reasonable person would reply "bloody hell, how much money have you got?" 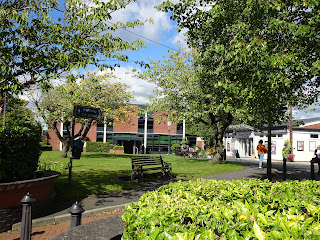 Alsager proper is centred around a crossroads, with a civic hall and library complex surrounded by trees and grass.  The shops here were very much open and well-used; the bakery here was promoting its fully laden, freshly made Turkey Wrap, rather than the pleasing but cheap assortment of E numbers you got in Kidsgrove.
Nothing is fair.  There are winners and losers in everything, particularly capitalism.  But I'd only walked for an hour and I was in a different universe of wealth.  And yet: there's a food bank in Alsager too.  Nobody is insulated from poverty.  It's just that it's taking a little longer to reach some people - and by the looks of it, this winter will be the crisis point. 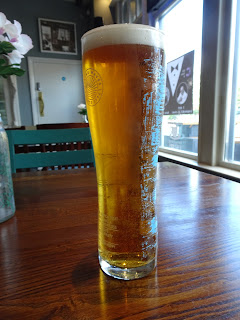 No, alcohol is not a solution to life's problems.  It does let you forget for a while, though.  I went in a deserted pub on the main street, the kind of place that you know is full of Sixth Formers on a Friday night taking selfies and doing Jagerbombs, and I sat in the window and drank my pint while Lizzo told me it was About Damn Time on the TV screen above my head.  I got lightly toasted. 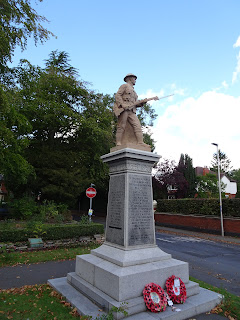 It was time for my train.  I headed south to the station.  Ahead of me, an Amazon driver pulled off a u-turn from a Bond film, swinging across the carriageway and dodging traffic with aplomb.  The other cars stopped in his tracks - perhaps out of admiration, perhaps fear.  The barriers lights on the level crossing began to flash and the driver went through at speed as though he was being chased.  At some point all these Amazon drivers are going to get other jobs and they're going to unleash their mad driving skills on normal cars and our A-roads will turn into Wacky Races. 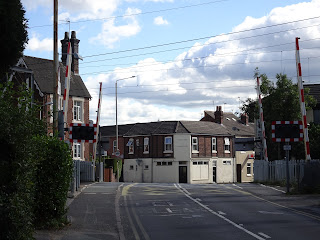 I went to the Crewe bound platform.  Across from me, there was an excitable group of teenagers, who literally leapt for joy when their train arrived.  I sank into a bench and ate the Marks and Spencer wrap I'd bought at Lime Street that morning, a little crushed after hours in my bag. 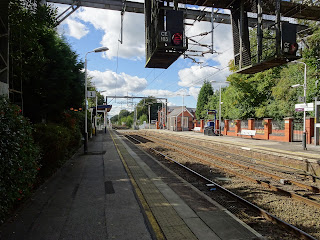 Another day, I might have been charmed by Alsager.  I might have delighted in it.  Not today though, not after Kidsgrove.  Perception is a funny thing. 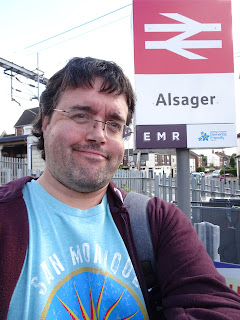 Thanks for the politics; agree completely.