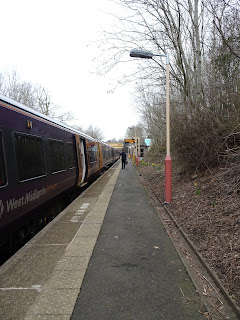 Arriving at Spring Road on a Spring day was coincidental, but pleasing.  The trees were still bare, but there were daffodils on the embankment, and I was able to go coat-free for what felt like the first time in years.  (Please don't fill the comments with how you've been wandering around in nothing but a vest and thong since January because you're a Tough Hardy Northerner).  It was good to be out, and it was good to be station collecting.  I let the rest of the passengers disperse and headed up to the street. 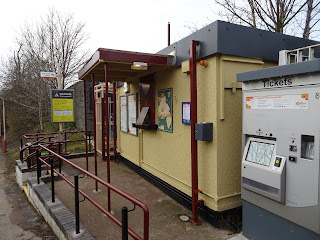 Spring Road does have a station building, although calling it a building might be overselling it - it's a portakabin with pretensions.  It was closed, of course, because open stations with a member of staff are a luxury, apparently, but there was at least a moment of interest on the wall - a wooden sign of the local area. 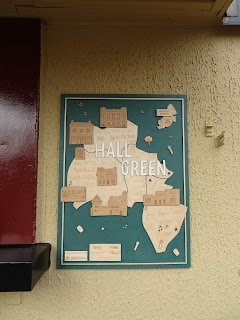 Musical Routes is a scheme to highlight Birmingham's musical heritage with maps showing the local area and the bands and artists that came from here.  It was launched by UB40 last November, although I must point out it was only one half of UB40.  They've undergone a Bucks Fizz-style split and now there are two versions touring - one called UB40 with Ali Campbell and Astro (although Astro sadly died last year), and one called just UB40, headed by Ali's brother Robin.  I don't know about you, but UB40 is Ali Campbell to me, so that'd be the version I'd see, if I was interested in seeing them at all, which I'm not.
Where was I?  Oh yes, Musical Routes.  There are now these wooden plaques at stations across the West Midlands to let you know what venues, people and bands hailed from this way.  This one mentioned Bally Sagoo, Nick Rhodes and Roland Gift; on the minus side, it also highlighted Ocean Colour Scene.  I never really think of Birmingham as a musical powerhouse - beyond UB40 it struck me as a lot of Heavy Metal bands - but of course that's not true at all.  I'll keep an eye out for more of these.  There's also a Spotify playlist for each map, which you access by scanning a code in the corner, and I'm listening to the Hall Green one as I type this.  It's playing All Funked Up (Mother's Pride Mix) by someone called Mother.  I have never heard this song before in my life, but that's mainly because I am ancient and completely out of the loop when it comes to music.  If it's not Britpop or astonishingly camp or a Bond theme I have no idea. 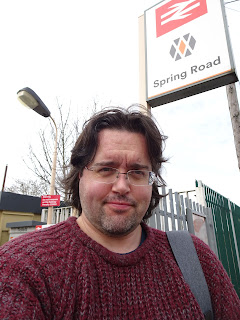 Yes, that is the same jumper I was wearing last time I went out on the trains.  Don't worry, it's been washed.
The area around Spring Road was pretty typical inner city.  A strip of small units flogging sandwiches and bathrooms.  A big ugly grey building with an arrow made out of unlit light bulbs, pointing the way to Scanlon's Private Member's Club; judging by the font they used, I guessed it was for the Irish community.  Round the corner there was a shopping parade filled with takeaways and bargain stores, shops who filled the pavement with giant plastic tubs full of strange items bought cheap from a cash and carry.  The roads were full of cars and double deckers passed by on their way into the city centre. 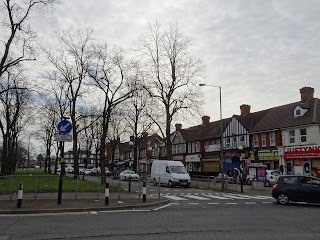 There used to be industry here too with a large factory for Lucas Aerospace, the engineering works.  They moved out in the early 21st century, and though it clung on under a different owner for a little longer, it finally shut up shop and the whole site was levelled.  At first there were proposals for a Morrisons and a retirement village on the site, but that went quiet, and now it's going to be red brick houses strung around cul-de-sacs like every other development in 2022. 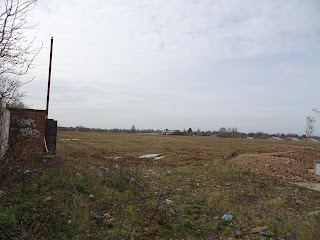 One curiosity is that the factory's multi-storey car park is still standing while the rest of it has been obliterated.  It even seemed to be in use, with cars on the top deck and plenty of signs warning me that CCTV was monitoring me.  A look at the site on the map shows why this remains; the car park was built on a deck right over the tracks.  Demolishing a building that literally straddles a busy railway would presumably be a logistical nightmare so they've simply left it there - though I hope the owners are maintaining it properly, before lumps of concrete start dropping on the trains. 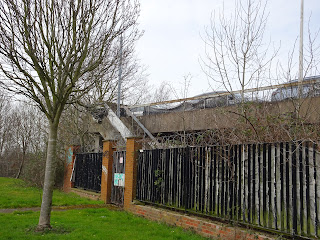 (The Spotify playlist has moved onto Pop Will Eat Itself doing Can U Dig It?.  The outfit I am wearing is in no way baggy enough to listen to this song).
As I walked further, the roads became more residential, long municipal avenues of council houses.  Their front gardens were blocked with wheely bins and bits of discarded furniture; the people who'd bought their houses had paved over the grass for more parking.  The grass verges were torn up from vehicles.  Signs told me to respect the local area and take my rubbish home with me. 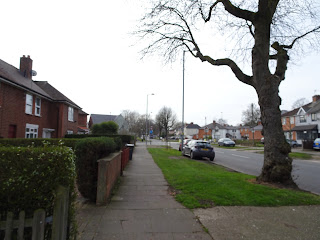 On one side road I saw a long industrial building.  It looked like a telephone exchange, or maybe an electrical substation; unmarked, unsigned.  Very Ministry of Works.  I admired its blankness and its refusal to be friendly or charming. 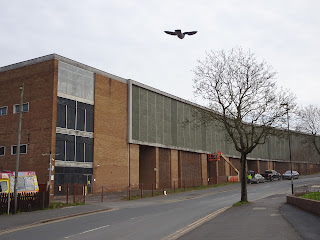 More houses were being squeezed in across the road.  These ones had green cladding strapped to the corner houses, trying to bring a hint of urban excitement to their suburban designs.  I wondered how you maintained that cladding as a homeowner.  If it drops off in a storm, what do you do?  You can't exactly go to B&Q.  How do you replace it? 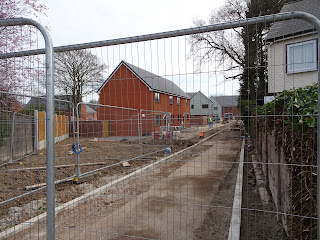 Stratford Road brought with it tyre services and a Tesco Metro.  There was a queue of builders getting their lunch from the Greggs, and the smell of steak bakes made my stomach rumble.  I managed to resist though, and headed for the station sign.  I was nearly run over by a car coming out of the car park, driven by the tiniest, oldest woman.  She hunched over the steering wheel as though she was afraid it would fall off if she didn't clutch it tightly and I genuinely don't think she even saw me.  She pulled out into the traffic with a swing. 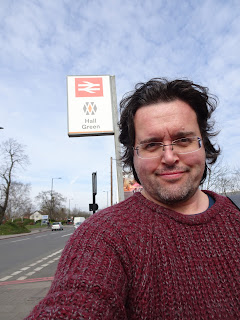 I've been calling Hall Green "Hall Road" in my head all week; this is of course a very different, rather more local station.  It has a proper station building, preserved and cared for, though once again it was unstaffed.  The website reckons it should've been open until two o'clock, but that certainly wasn't true.  It's probably another of those "temporary Covid measures" that the railways have used as an excuse to cut costs. 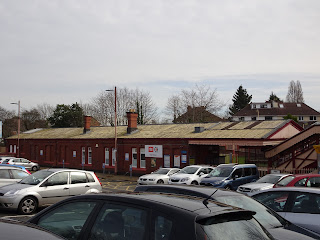 (Now playing: Dry Your Eyes by The Streets, which I bloody love, and which was one of the first songs I ever bought on iTunes.  Also Mike Skinner, eh lads?).
As I arrived at the station, I vaguely heard an announcement about the next train to Stratford-upon-Avon, and I realised I might have got there in time to take the earlier train.  I dashed up and over the footbridge but it was only when I reached the platform that I understood the announcement was that the Stratford train was cancelled, and now I had a forty minute wait for the next one south. 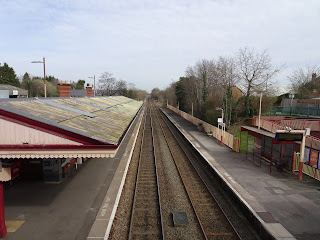 I took a seat in the shelter at the opposite end to an elderly man in a face mask.  He was one of the few people I saw wearing a face mask on my whole trip.  I'm still wearing one on trains, myself, for the simple reason that I haven't had a cold in two years.  Admittedly I've not been out much but still: normally I get at least one rotten cold per season, and I've not had so much as a sniffle since 2019.  If that makes me a wokebro snowflake wuss, so be it.  Also I can now grimace at the behaviours of complete strangers and mutter "wanker" under my breath and they're none the wiser.
I ate my Marks and Spencers sandwich, purchased at Lime Street that morning, and sipped the fizzy water.  My seat was directly opposite a teenage girl on the other platform and we spent our entire wait time studiously avoiding making eye contact over the tracks.  A young Asian lad in a hoodie came down the footbridge steps and wafted a powerful cloud of weed across the station.  The fumes swirled around the shelter and I wondered if I could float to the next station.  Fortunately a train arrived, so I didn't have to find out.
(The Spotify playlist is on Pram's Track of the Cat and I will now be pausing to put on something more enjoyable.  Perhaps a bit of Kylie).
Posted by Scott Willison at 12:24